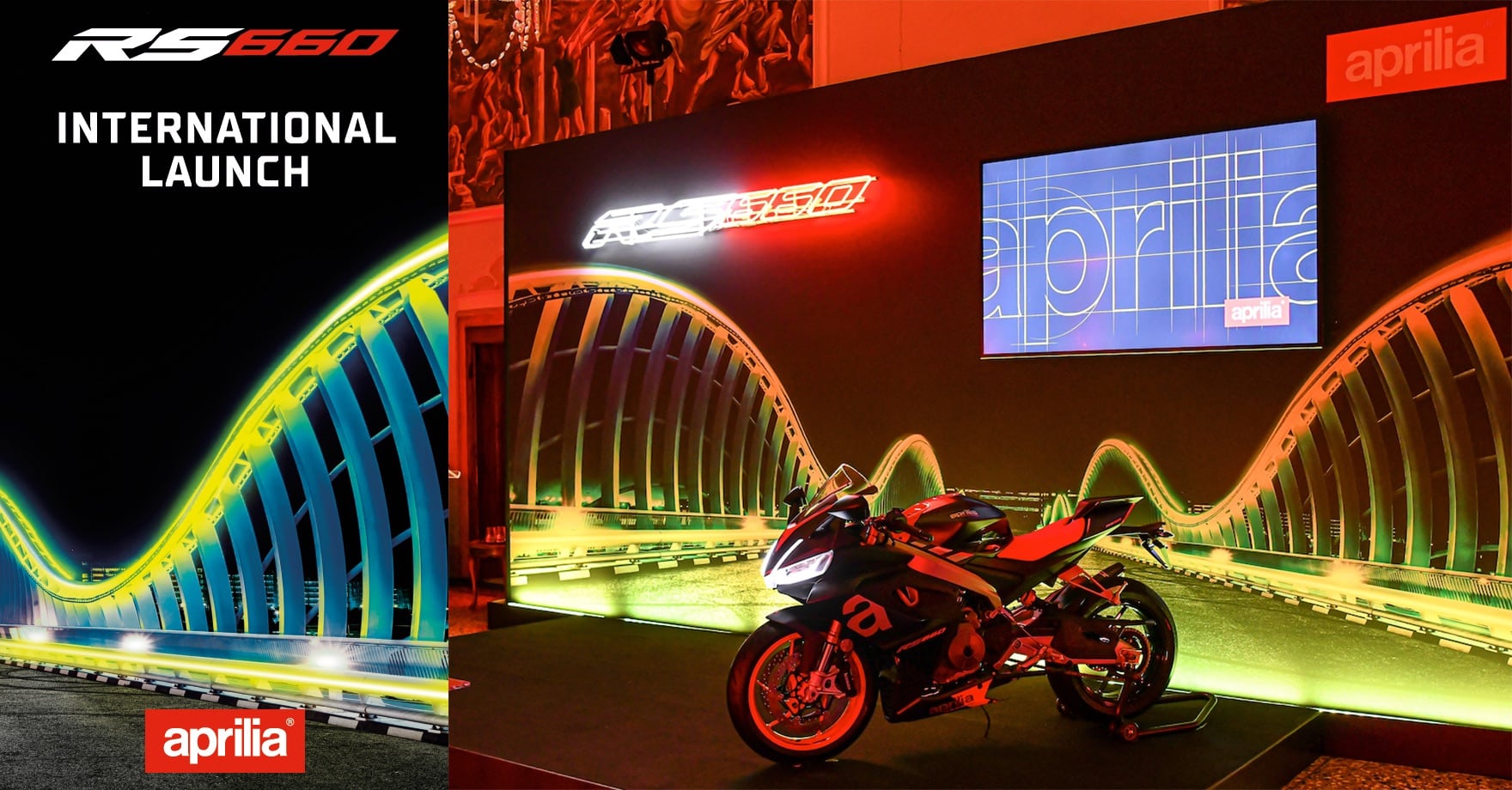 October 2020 – In Veneto, Aprilia’s “homeland”, the successful international launch of the new RS 660 was held for the press (9 -16 October) and for dealers (16-18 October). Location: Bassano del Grappa and the outskirts, province of Vicenza. 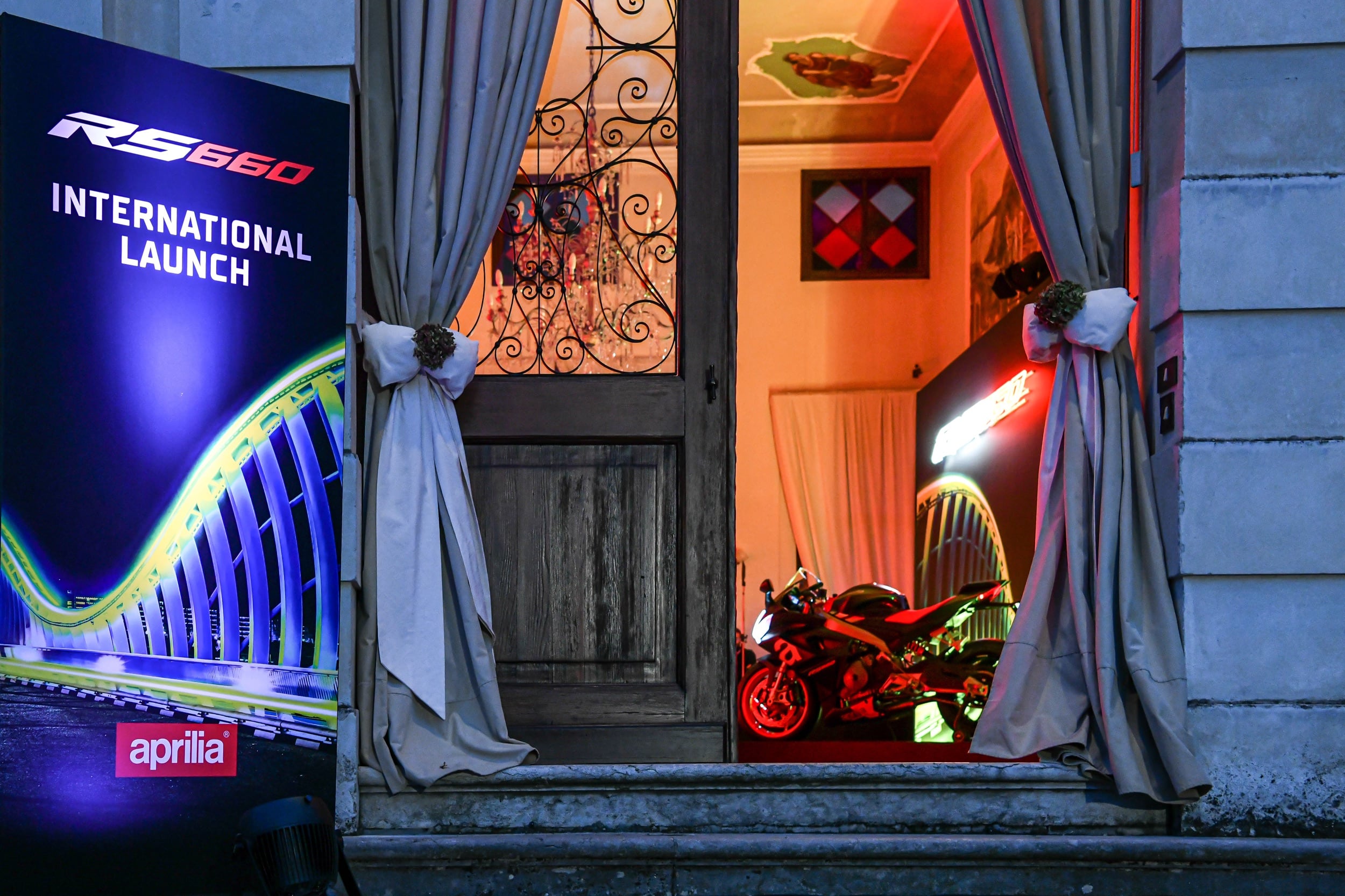 A launch that required complex logistical organisation, with painstakingly defined times for the arrival of the groups from the various countries in full compliance with the measures and requirements of health regulations, with protocols delivered to all participants in order to safely experience the event in “real Aprilia style”. Regulations which certainly did not dampen the curiosity and enthusiasm for the highly anticipated RS 660 International Launch.

It began on Friday, October 9th with the arrival of the first group of journalists and then a media brief in the afternoon from 6:00 to 7:00 in villa palladiana Angaran Delle Stelle (in Mason Vicentino) to provide a typical experience of the Veneto territory, rich with history and charming landscapes: the contrast between the press conference setup, with the RS 660 on the stage, a concentrate of advanced technology, hosted in a historic hall among frescoes and paintings on the walls and ceiling, stuccoes and crystal chandeliers. The Veneto Palladian villas, built around the middle of the sixteenth century by architect Andrea Palladio, are part of the Unesco Heritage; an idea for a bike trip: a tour of the villas.

Then, on the following days, the programme was as follows: in the morning, appointment at the test ride point and departure from the Sweet hotel in Schiavon, along the charming Veneto roads around Bassano del Grappa, following the pre-defined road map, which also included more challenging mountain sections (and certainly more fun), for more than 280 km and almost 5 hours, including apit-stop for lunch along the route.

Then, it was back to the hotel in the afternoon for the departure of the guests, as the next group of journalists arrived. A truly intense week, with the departure of the journalists and the arrival, in the afternoon of Friday, October 16th, of the dealers who, after the briefing, also experienced that beautiful itinerary on the road astride the Aprilia RS 660, divided into groups which alternated, following the roads around Bassano and the nearby mountainous areas (about a one-hour, fifty km route) throughout the weekend. 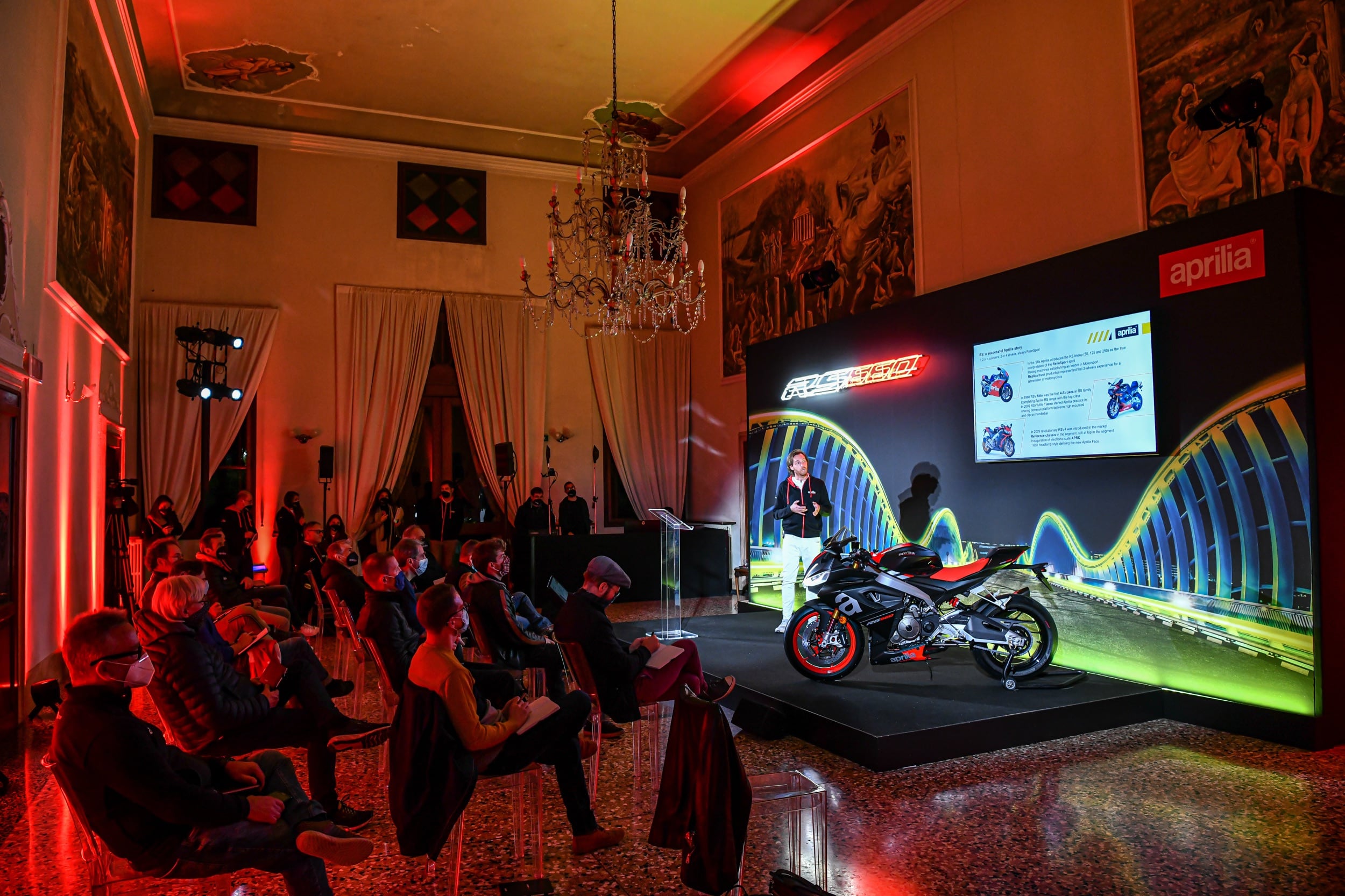 The Piaggio Group Product and Racing Press Office explains: “We hosted 56 journalists from 13 European countries; there were about seventy periodicals represented, with some further extra-European ‘releases’ thanks to the presence of ‘global’ freelancers like Alan Cathcart and Klaus Nennewitz”. They were joined on the following days by various groups of selected dealers, national and international (more than 30 dealerships).It was a full schedule for all: media briefs, technical briefs, vehicle tests, dynamic shooting (for the press), bike and accessory display.

Of course, the test ride was the activity that launch guests anticipated the most, “chomping at the bit” to swing a leg over the saddle and test the new gem from Aprilia on the road. About ten Aprilia RS 660 bikes were available to them and 4 Aprilia Tuono units were used as lead and chase bikes. Plus: a fully-loaded Aprilia RS 660 on static display during the media briefs and another in the hotel (departure point for the test rides) for all to admire up close and in detail. 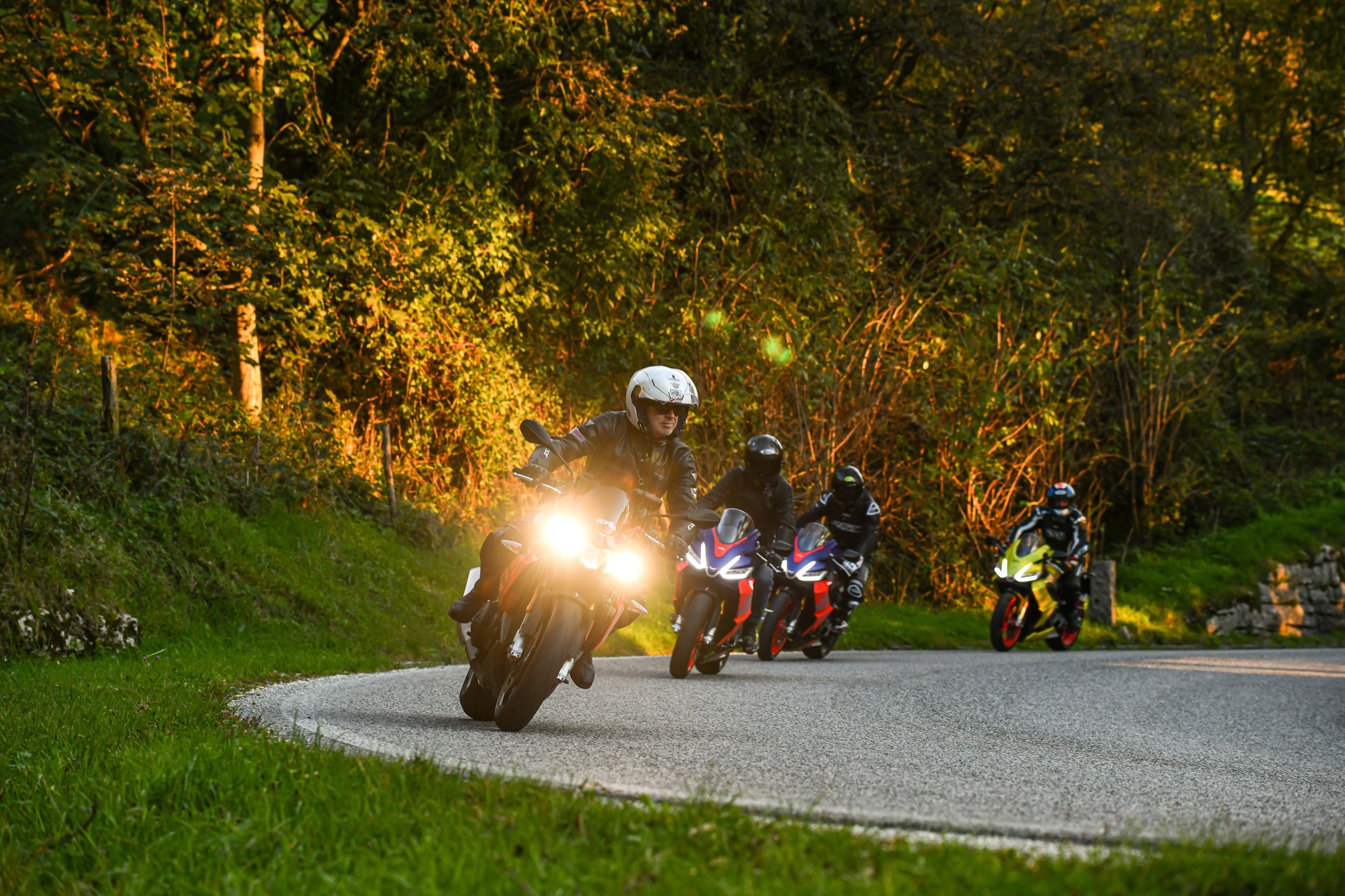 But what are the strong points the journalists focused on? Our Press Officers sum them up for us: “The quality and the novelty of the project; engine performance; the electronics; the precision of the chassis architecture and, last but not least, the aesthetics.” Lots of good qualities, but were any weaknesses found? “If we really want to look hard for one, the slight vibration at the footpegs which are actually normal since we’re talking about a twin-cylinder.” And now, here are some of the initial comments from some of the major periodicals during the launch days. 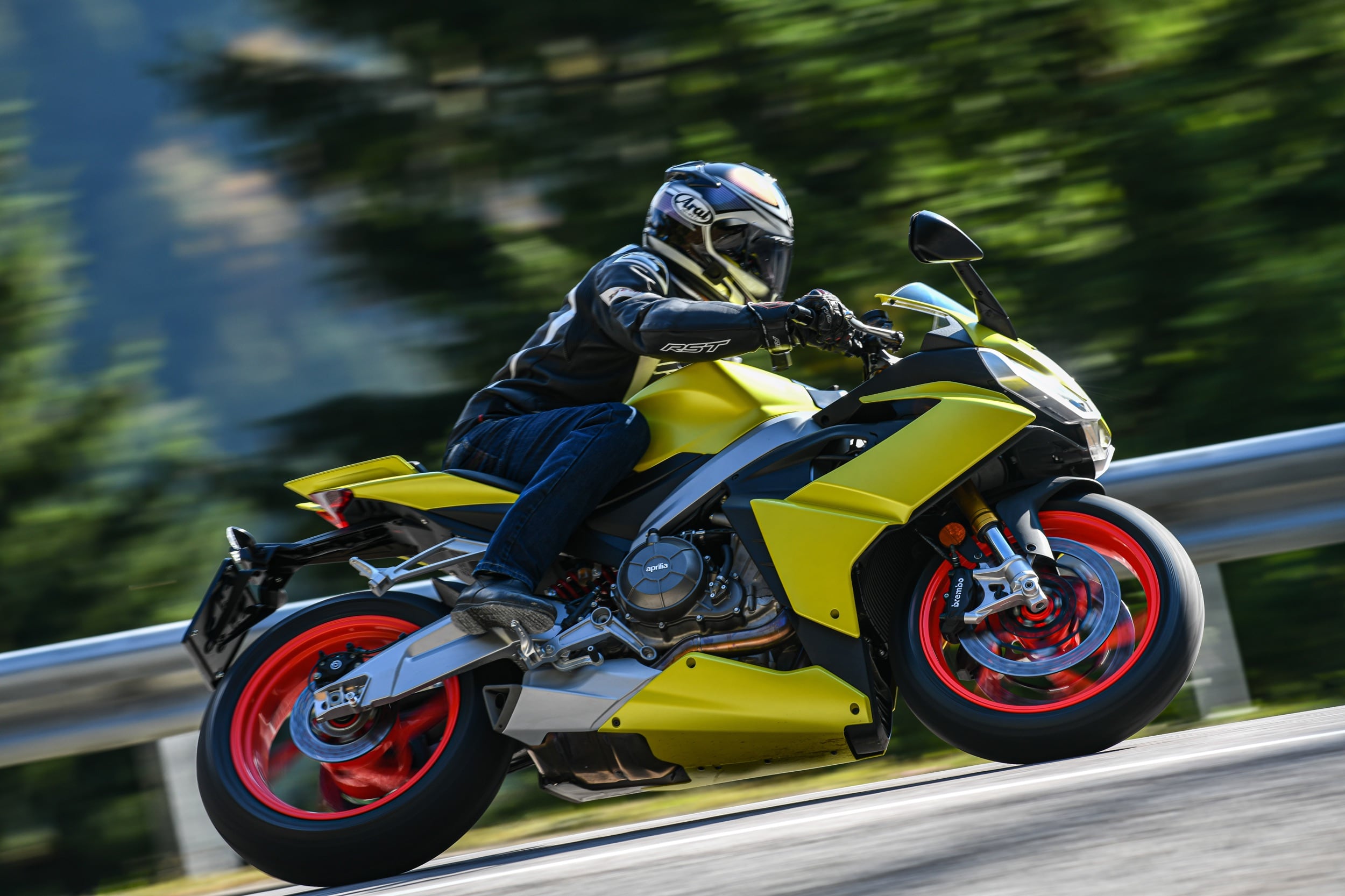 MOTORRAD (Germania): “An easy to ride, very versatile and modern sports bike with excellent handling characteristics. Newcomers will certainly find just as much fun on the 660 as experienced riders”.
1000PS (Germania): “The new RS 660 can handle everyday life very well thanks to a comfortable seating position…, but the lively engine and the high-quality chassis with good suspension elements can also be moved in a really sporty way. The brake moves somewhere in between, and the electronics could not be more extensive. After all, the RS 660 sets new standards in terms of design and is not willing to be put into any category”.
MCN (UK): “On the road you’ll never be dancing on the gear lever in search of power, because there’s plenty of it and being so light (just 183kg wet) it doesn’t need much to push it along anyway. The RS660’s crowning glory is its electronic rider aids, which along with its tasty chassis parts sets it apart from its lower-spec Japanese rivals. We were hoping the RS660 would be slightly cheaper, but when you look at its spec and performance you get a lot of sportsbike for the money”.
Michael Neevs - Motor Cycle News (Via Twitter): “We’re riding Aprilia’s 99bhp, 183kg, £10,149 RS660 today. Could this be the sportsbike we actually want for the road? Who really uses the top end of their revs and what tall rider actually being crunched up on a race rep? This could be a cracker”. 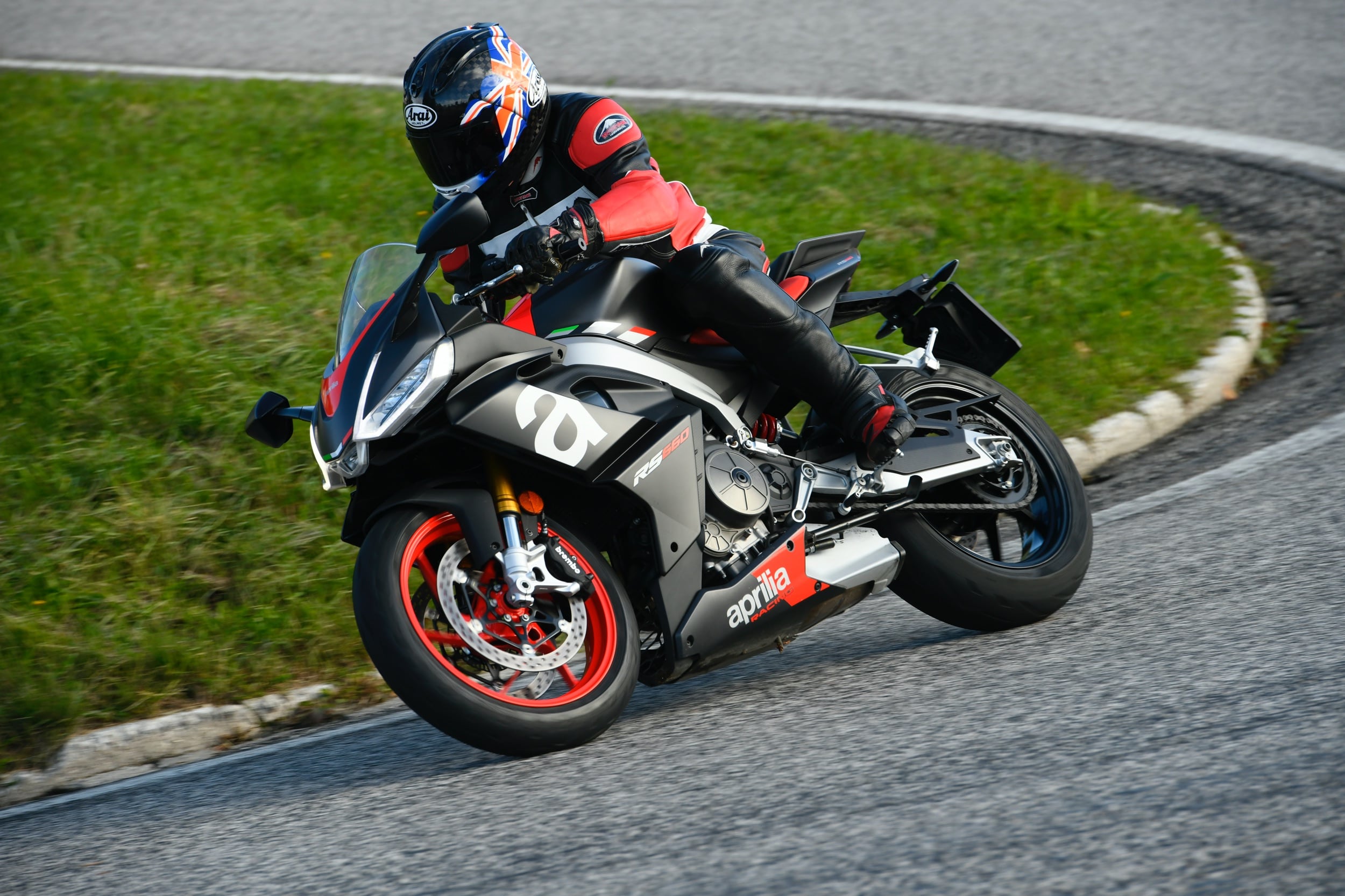 MOTO-STATION (Francia): “A real ‘in-between’ that is finally very relevant and will speak to a large audience. A brilliant novelty that also announces a platform full of potential”.
LA STAMPA.IT (Italy): “The new motorcycle from Noale is incredibly beautiful and easy to ride.”
GQ Italia.it (Italy): “The Aprilia RS 660 is precisely the bike that was missing in a two-wheel market that has followed the usual patterns for years, almost never straying from them.”
MOTO.IT (Italy): “The surprising thing is how the RS 660 seems to be a well-tuned musical instrument, engine, frame, suspension and electronics dialogue to perfection…”. 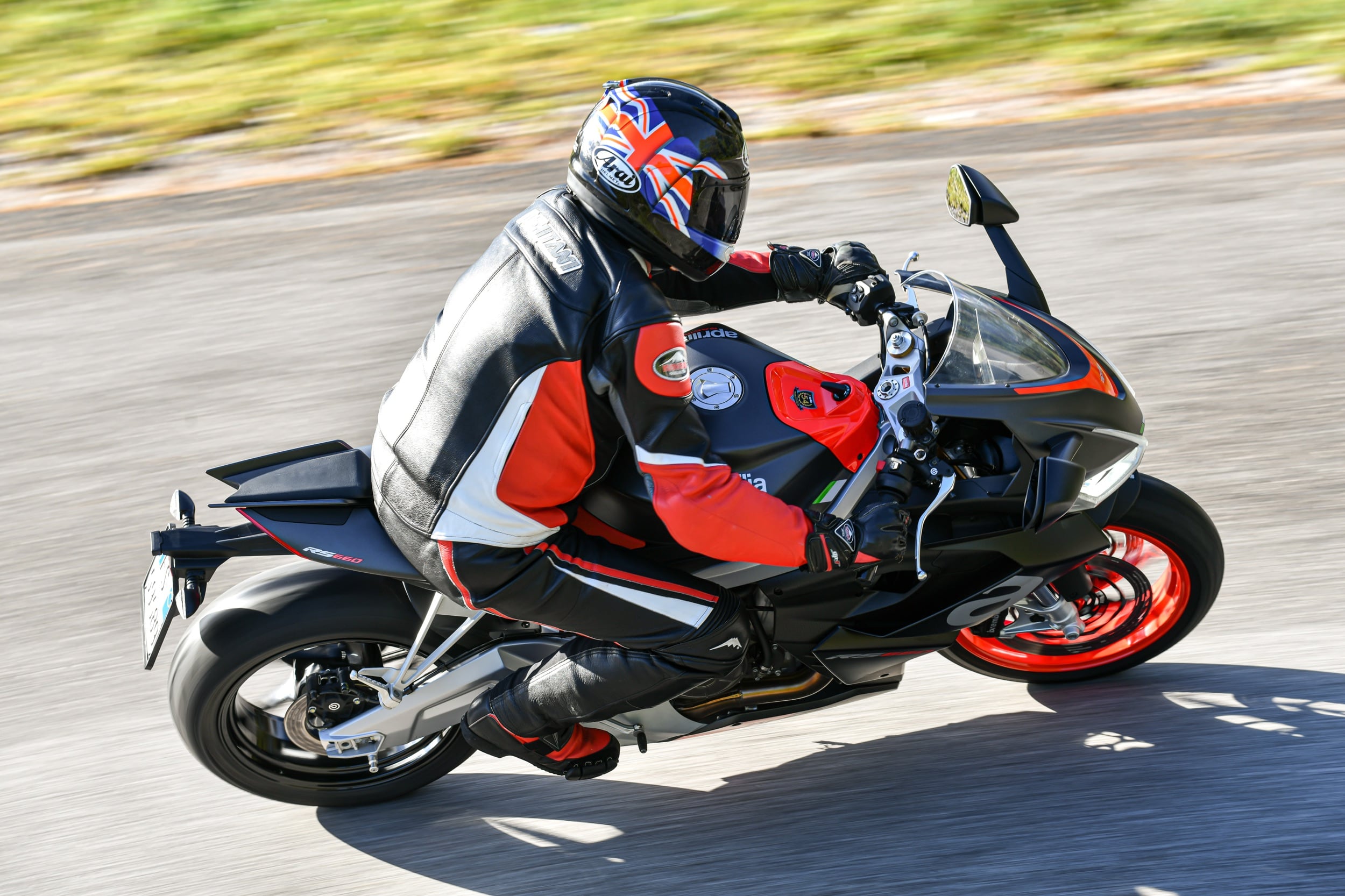 DUERUOTE (Italy): “The Aprilia RS 660 writes a new chapter in the history of extreme integration of the bike’s elements, taking the symbiosis between chassis architecture, engine and electronics to levels that have never before been seen, and not just in this category.”
Gazzetta dello Sport (Italy): “But the ace up the sleeve of this mid-size is the engine. The twin-cylinder from Noale is astonishingly easy to use: the sound that comes from the exhaust is engaging even at idle speed. At slow speeds it doesn’t buck, and it doesn’t jerk in the higher gears either. Over 6,000 rpm, on the other hand, it turns into a real lion.”
Motociclismo.it (Italy): “Aprilia really did a good job with this new RS 660. A motorcycle that looks like a pure sport bike, but in the saddle it also proves to be a good companion for long rides. A bike that can not only attract that new generation of riders who are looking for a vehicle that didn’t exist until now, but that can also bring more seasoned riders back to sport bikes who were tired of superpowers that were hard to handle on the road and contortionist riding positions.”

And, over the following days and weeks, an avalanche of articles will be published in the national and international press between the specialised press, dailies and the web, not to mention all the TV coverage dedicated to the Aprilia RS 660, highly anticipated and sought after, in online prebooking since mid-October:
www.aprilia.com/it_IT/aprilia-rs-660

Welcome, Aprilia RS 660, the motorcycle that wasn’t before there: with her “a new era begins!”.

EVERYTHING YOU WANT TO KNOW ABOUT THE NEW APRILIA RS 660, WITH VIDEOS AND PHOTOS, HERE:
wide.piaggiogroup.com/en/articles/products/aprilia-rs-660-the-sports-motorcycle-factory-par-excellence-presents-the-rs-660/index.html 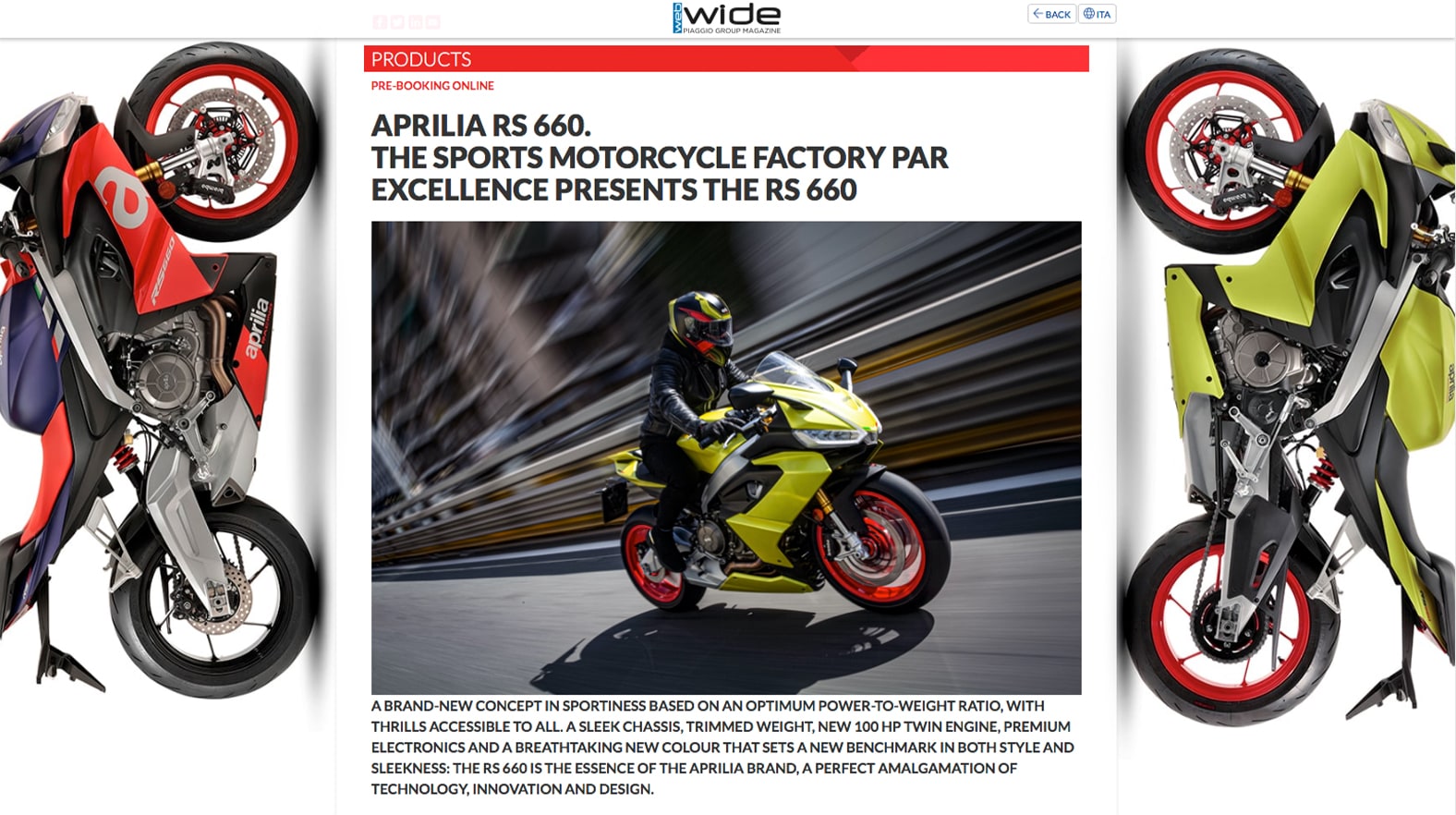