AT THE PIAGGIO MUSEUM: “VESPIZZATEVI. 75 YEARS OF SUCCESSES AND RESTARTS” EXHIBIT EXTENDED THROUGH 31 DECEMBER 2021 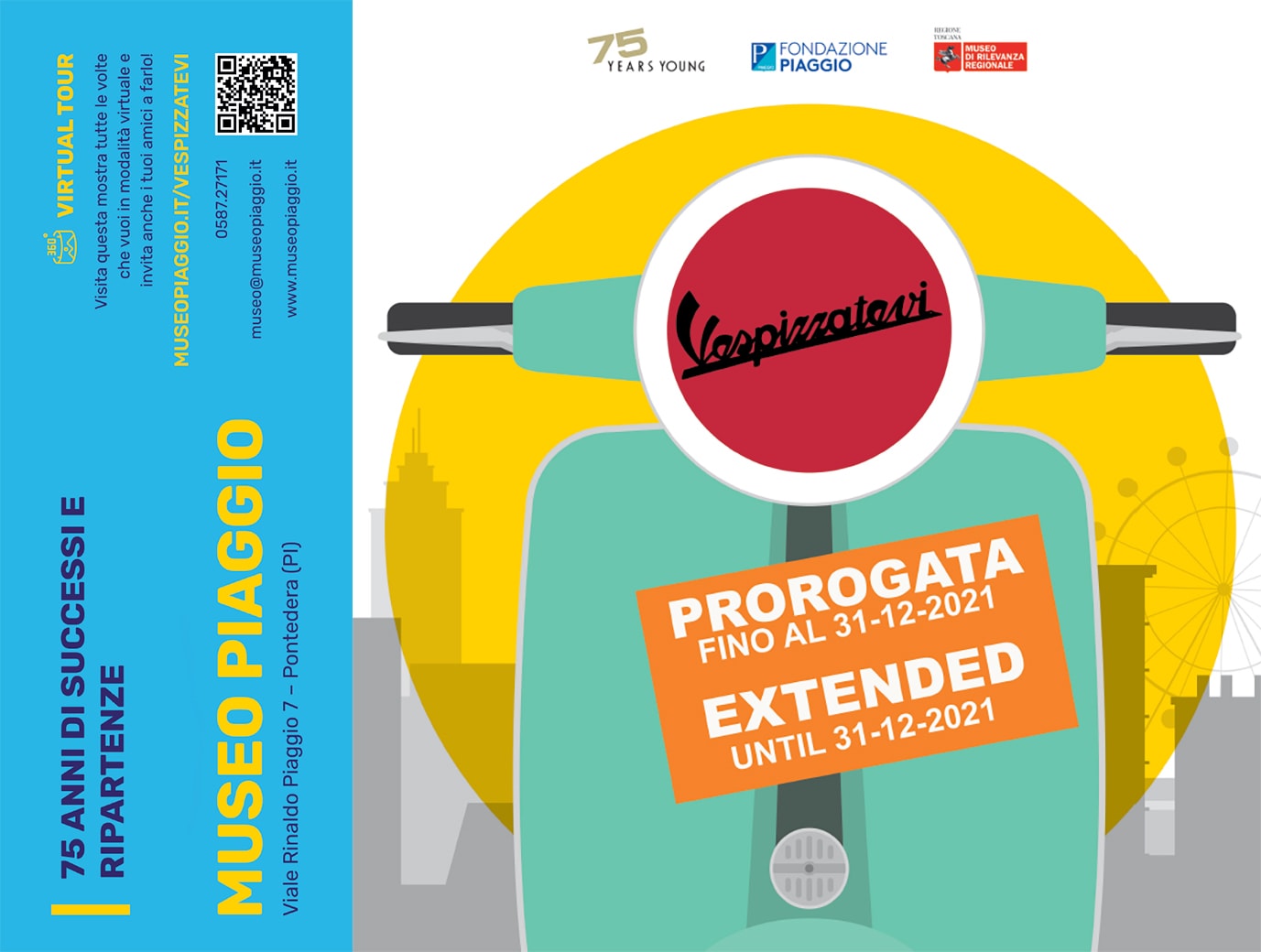 October 2021 - At the Piaggio Museum in Pontedera (Pisa), the exhibit Vespizzatevi. 75 years of successes and restarts has been extended through 31 December 2021. Opened on 23 April of this year, the display dedicated to Vespa’s 75 years (1946-2021), is made up entirely of documents from the Piaggio Historical Archive (which has its headquarters at the Museum) and, through photographic and advertising images and representative examples of the renowned scooter, it traces seventy-five years of an extraordinary industrial story that began in the post-WWII era, successfully distributing Vespa and its lifestyle to the streets of the entire world. It is a story that also elevated Vespa to the status of a ‘Made in Italy’ icon, protagonist not only in terms of successful sales, but also technical and stylistic evolutions, extending its unsurpassed “charm” to culture, the cinema and the arts.

The term Vespizzatevi dates to 1950: it was the tag line of a successful Vespa communication campaign on graphics by Nino Ferenzi. The graphic artist from Trieste was the first to illustrate the campaign which would subsequently boast the signatures of great names in advertising the calibre of Frenchman Villemot and Italian graphic artist Zambelli. The invitation, or rather, the imperative, was explicit: Vespa was the new way of moving about, faster and easier than public transport, which were still far from efficient, more economical and accessible than the automobile. 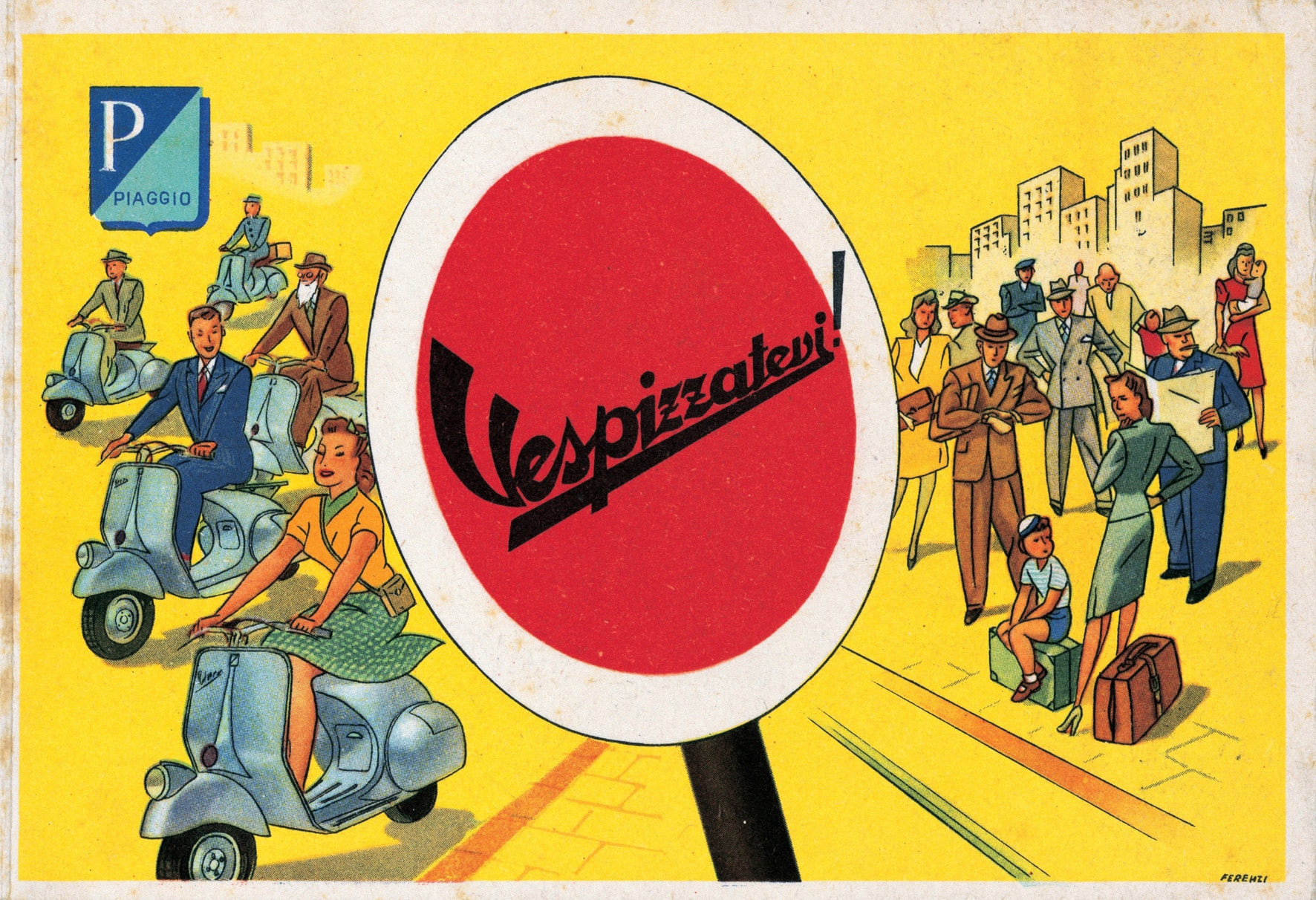 Vespizzatevi constituted a true linguistic revolution in communication, creating a verb from the name Vespa. It was a trend that would lead to legendary campaigns like “Chi Vespa mangia le mele” (Those who Vespa eat the apples) and “Giovane chi Vespa” (Those who Vespa are Young) in the following decade. Vespa produced a series of messages which stayed in the general public’s memory, a testament to the attention to the social fabric that only Vespa could afford - part of many people’s daily lives from the start (millions of people over the years) - an object that accompanies personal memories and subjective adventures. 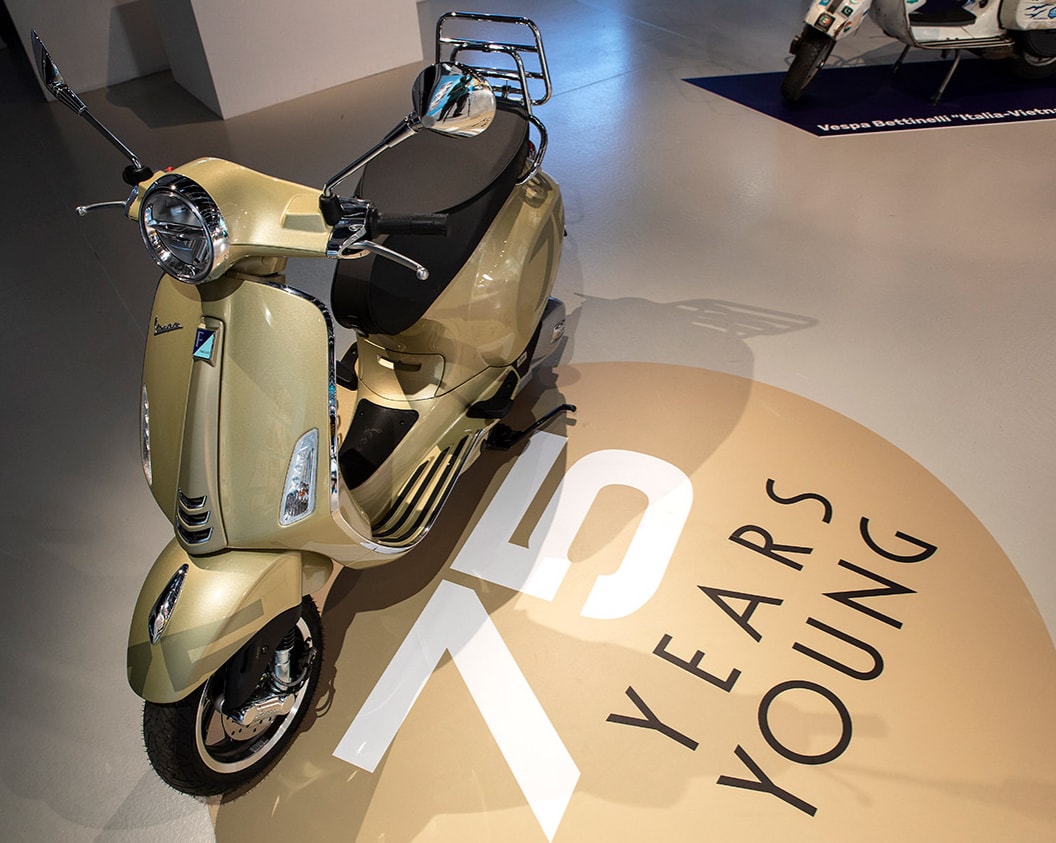 A virtual tour of the exhibit is also available! Here is the link:
mpembed.com/show/?m=9yXDC7tUZbK 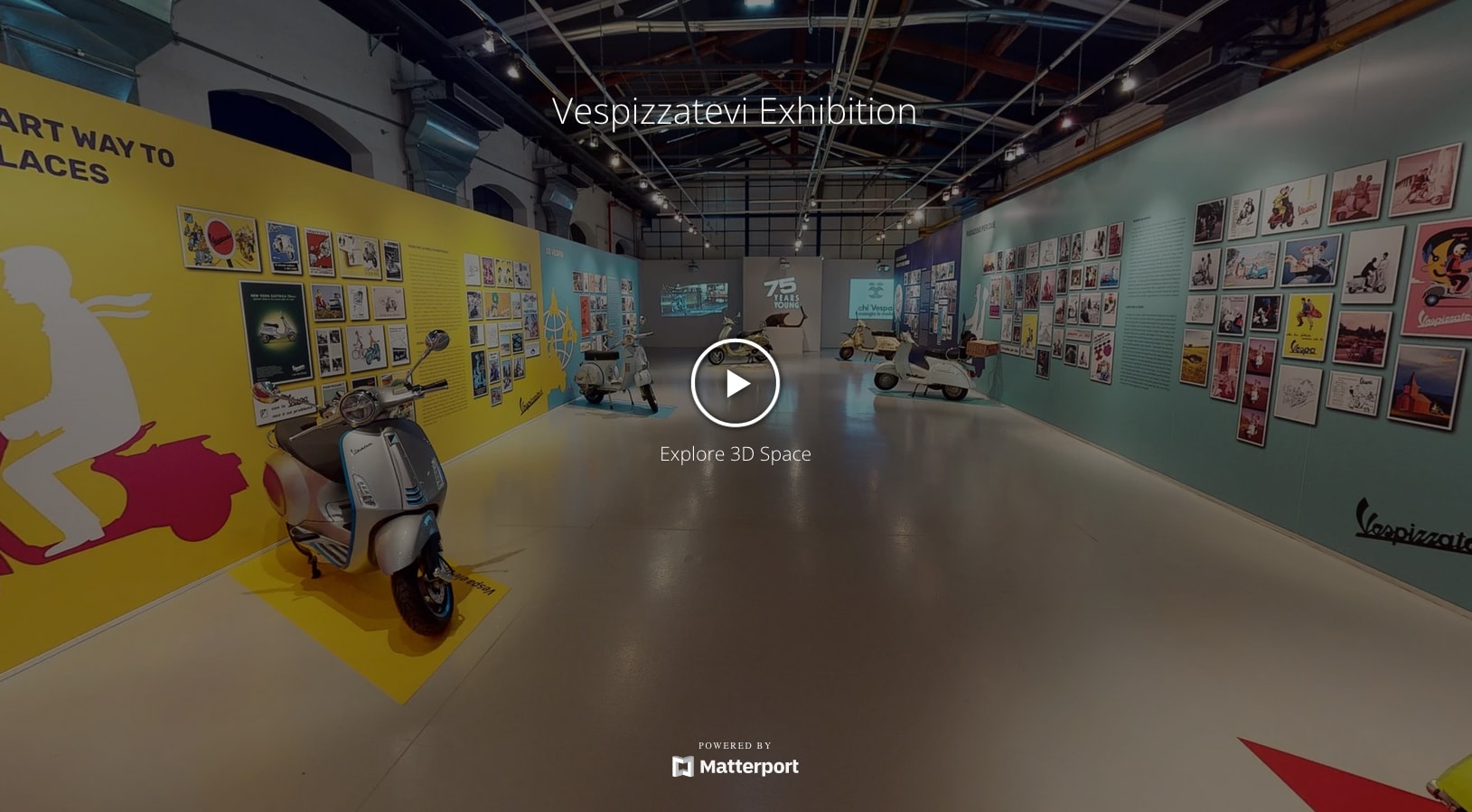 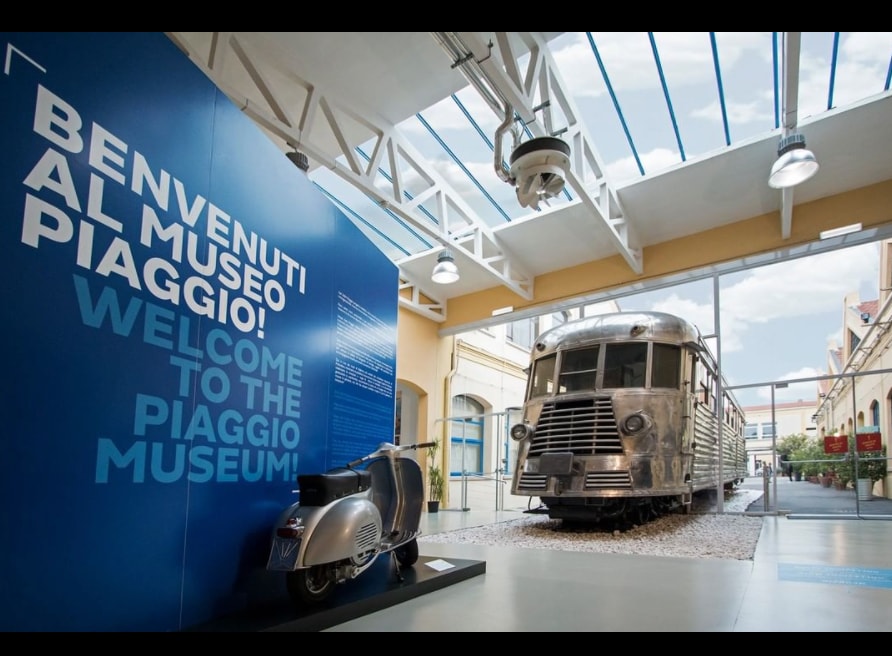 ALSO READ THE PREVIOUS ARTICLE DEDICATED TO THE EXHIBIT:
wide.piaggiogroup.com/en/articles/corporate/a-colourful-exhibit-celebrates-vespa-75-years-at-the-piaggio-museum 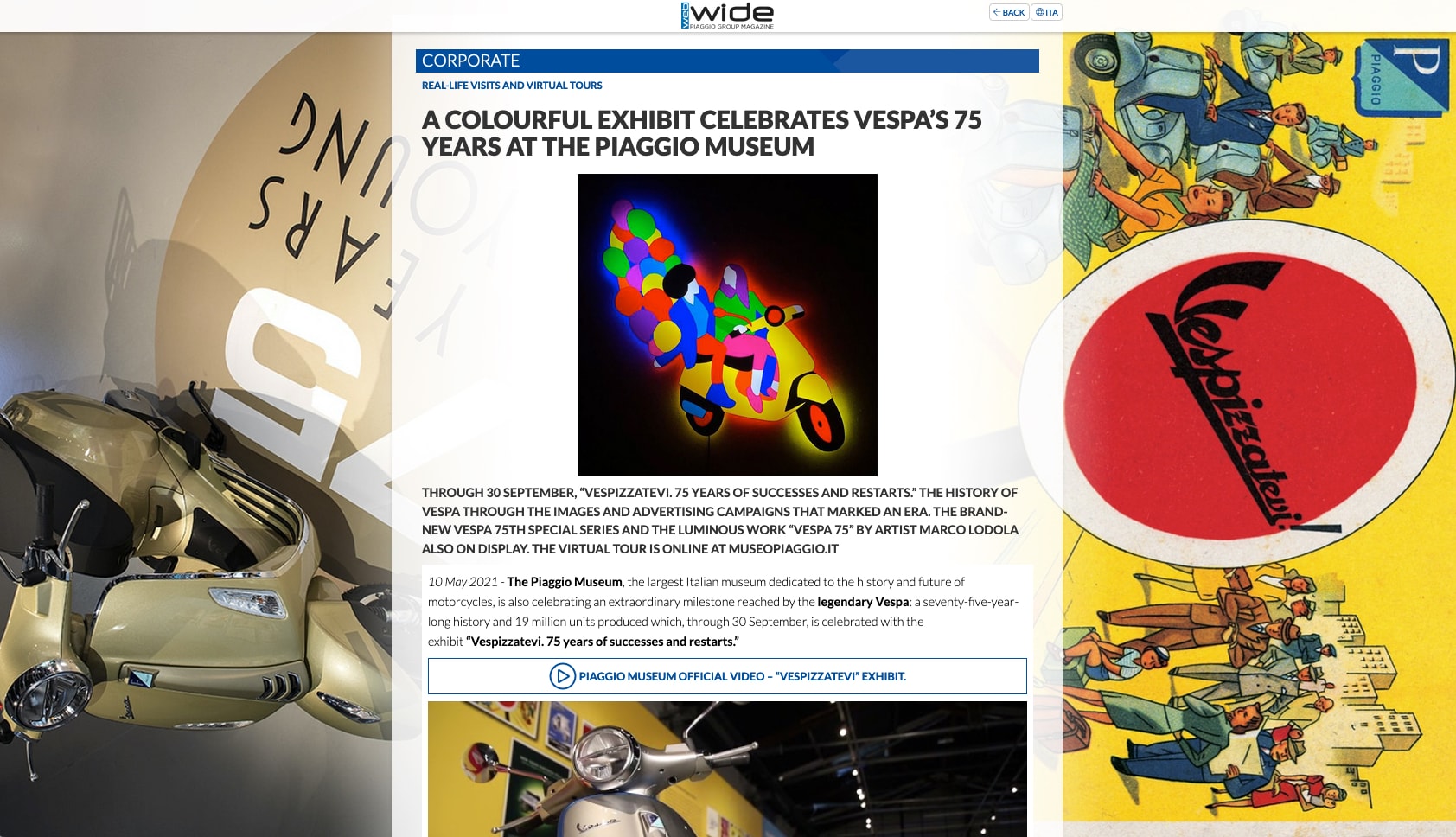