A TRIBUTE TO THE PIAGGIO APE 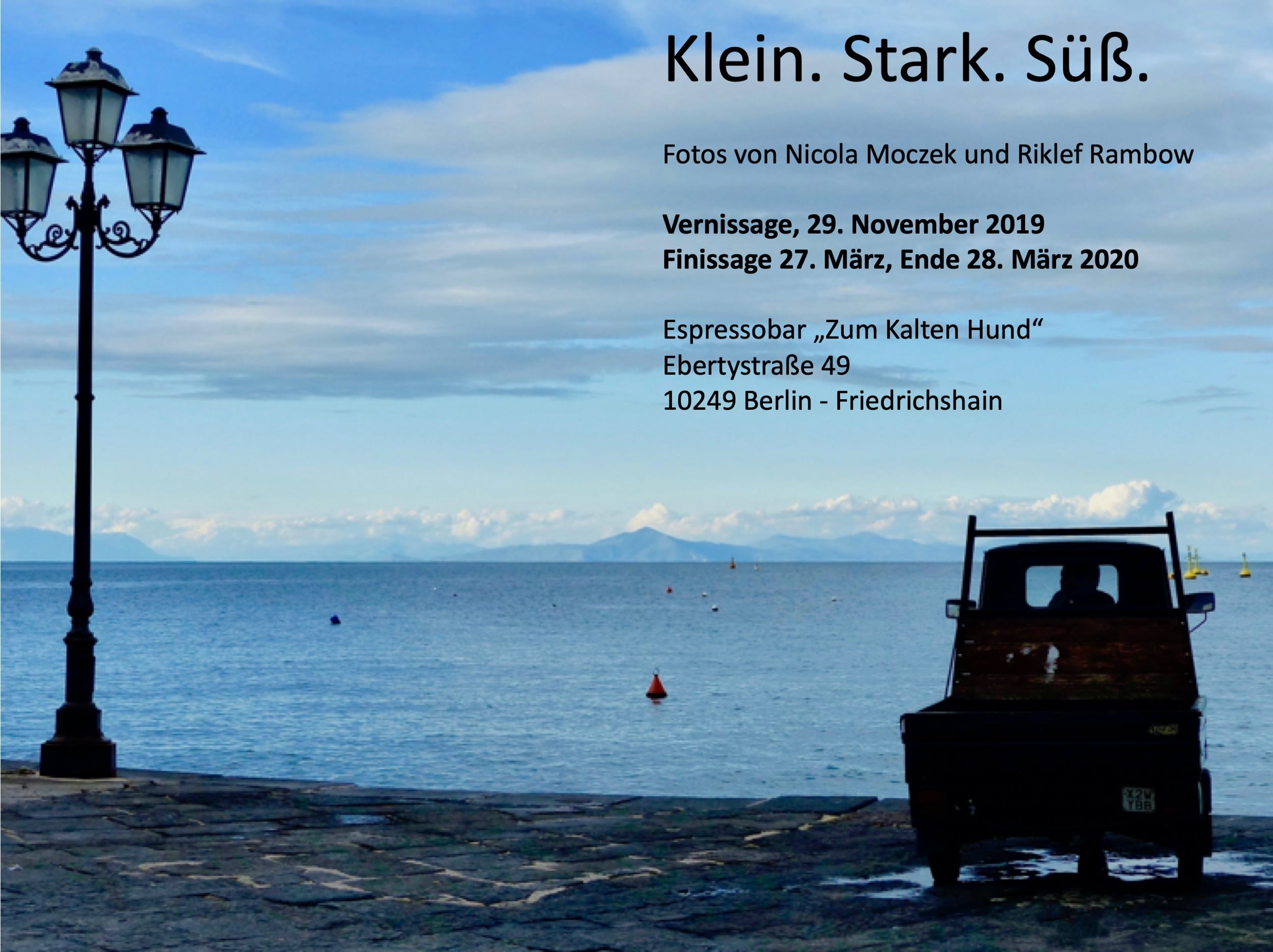 The poster for the “Klein. Stark. Süß.” exhibition by Nicola Moczek and Riklef Rambow, Berlin.

February 2020 – A beautiful tribute to the Piaggio Ape, an Italian three-wheeled light transport icon for more than 70 years, famous all over the world, and now celebrated in none other than an extraordinary photo exhibition in Berlin. It is entitled “Klein. Stark. Süß.” (Small. Strong. Sweet.) and it is hosted in an original setting: the elegant “Zum Kalten Hund” Espressobar in Friedrichshain. It will run through March 28th, 2020. The creators of the exhibition and the photographers are Nicola Moczek and Riklef Rambow, “in love” with Ape and with Italy. We thank them for providing Wide readers with a few images of the exhibition and a selection of the works on display.

“Klein. Stark Süß.”: a look at the exhibition.

THE CREATORS OF THE EXHIBITION. Nicola Moczek has a degree in psychology and has lived in Berlin since 2001. Along with her husband, Riklef Rambow, she is founder and director of PSY: PLAN, a research and consultancy institute focusing on environmental psychology, architectural and urban psychology. Riklef also has a degree in psychology and he is a professor for Communication of Architecture at Karlsruhe Institute of Technology (KIT). Nicola and Riklef have been travelling Italy for almost twenty years now. During that time, they have developed a strong interest in all aspects of Italian culture, partly for professional and partly for personal reasons. A special focus of this interest is in Naples and the Campania region. On the island of Ischia, for example they have literally walked every path and they know every single Café Bar and vegetable shop. 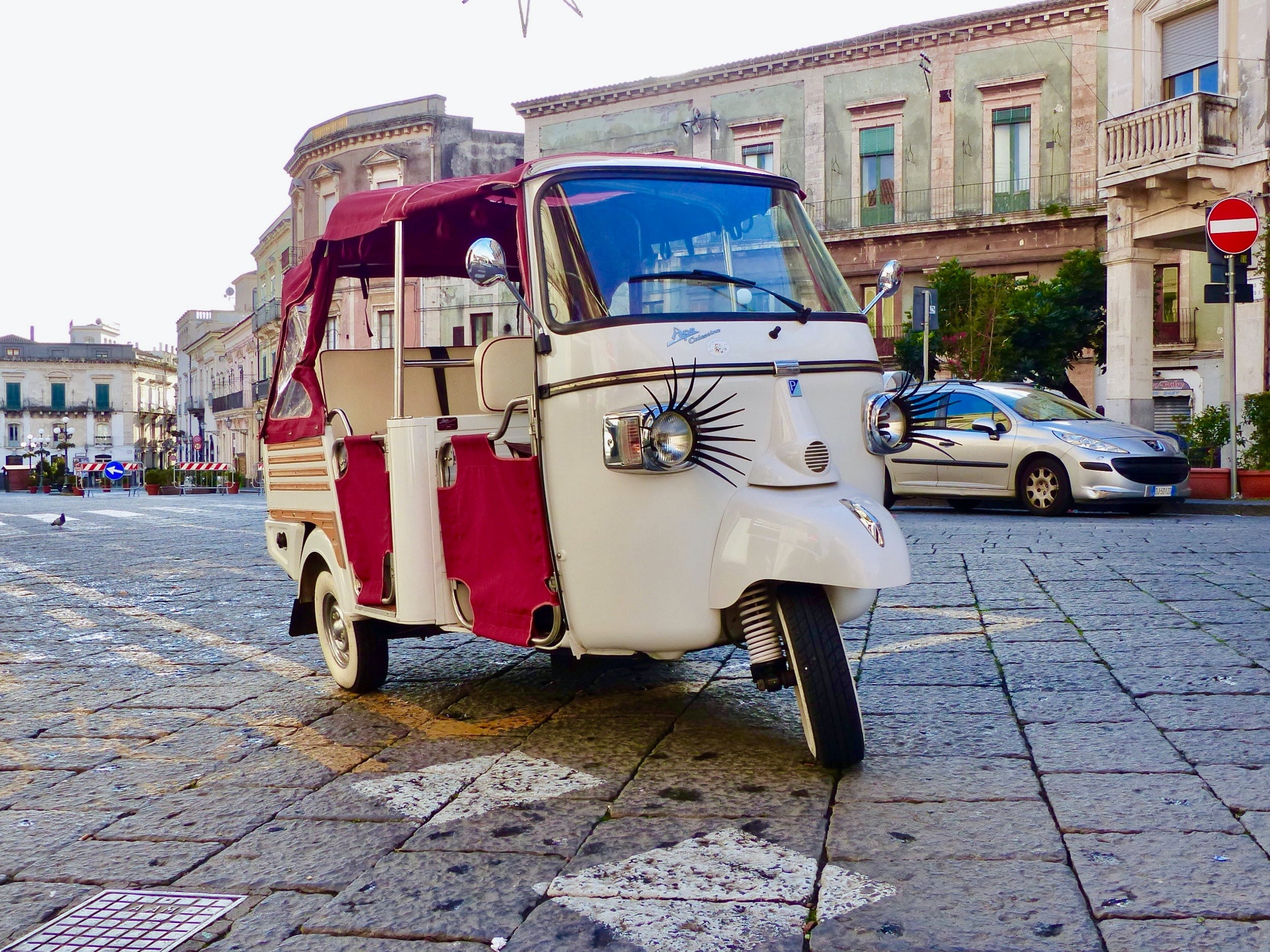 IN LOVE WITH APE. Nicola and Riklef tell us that on these journeys, they quickly fell in love with the Ape. They explain “It is easy to see that the Ape (and the Vespa) is an indispensable part of everyday culture in the Mezzogiorno (translator’s note: regions of the South of Italy). Walking around Ischia you will encounter it everywhere, in all variations and all conditions, from neatly groomed and decorated, to rusty and abandoned, overgrown by plants. The ubiquity of the Ape makes it a natural object of photography.”

“The love for the Ape exploded around 2003. At the suggestion of Marina and Giuseppe Capuano (who, at the time, had the “Pizza a Pezzi” on Oranienstraße in Berlin) we went to their home island for the first time - Ischia. And these small Ape vehicles were swarming everywhere, like so many zealous, bustling insects. They have faces: this is why we did portraits of them from the beginning as having personalities.” Nicola Moczek

And so, Nicola and Riklef began photographing the Ape “to document this diversity of uses and of interactions with the landscape, the culture, and the built environment. Seen through the lens, the Ape becomes sort of a guide that shows the visitor how people are leading their lives and how they appropriate the land, towns, and villages. Every now and then, you are confronted with an Ape that highlights an interesting situation, be it a game of bocce in the harbour, the selling of citrus fruit from the truck, the view from a belvedere (translator’s note: scenic overlook) in the evening sun, or a meeting place for young lovers. Even just below the peak of Mount Epomeo, on steep and narrow paths where no car could ever go, you can be sure to meet an Ape, where you least expect it.” 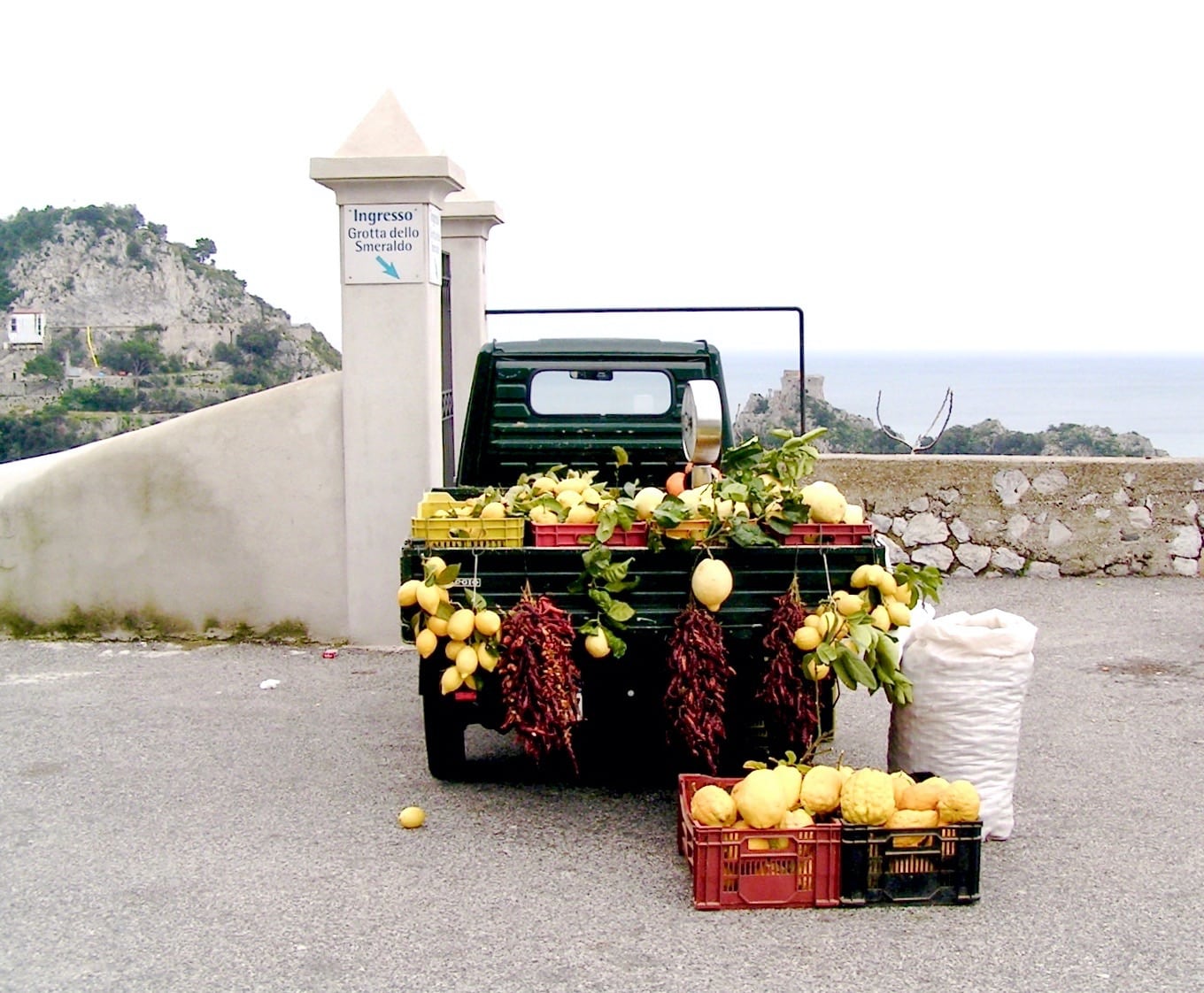 HOW THE EXHIBITION CAME ABOUT. “Since we started photographing the Ape in 2003 it has become a slight obsession and we have accumulated a collection of several hundred portraits. There was always the idea to someday show an assortment of this collection, but not being artists or professional photographers, we had to wait for some lucky coincidence to make that happen. This opportunity arose when Jens and Viola Rose showed interest in installing a new exhibition in their Friedrichshain Café Bar ‘Zum kalten Hund’. 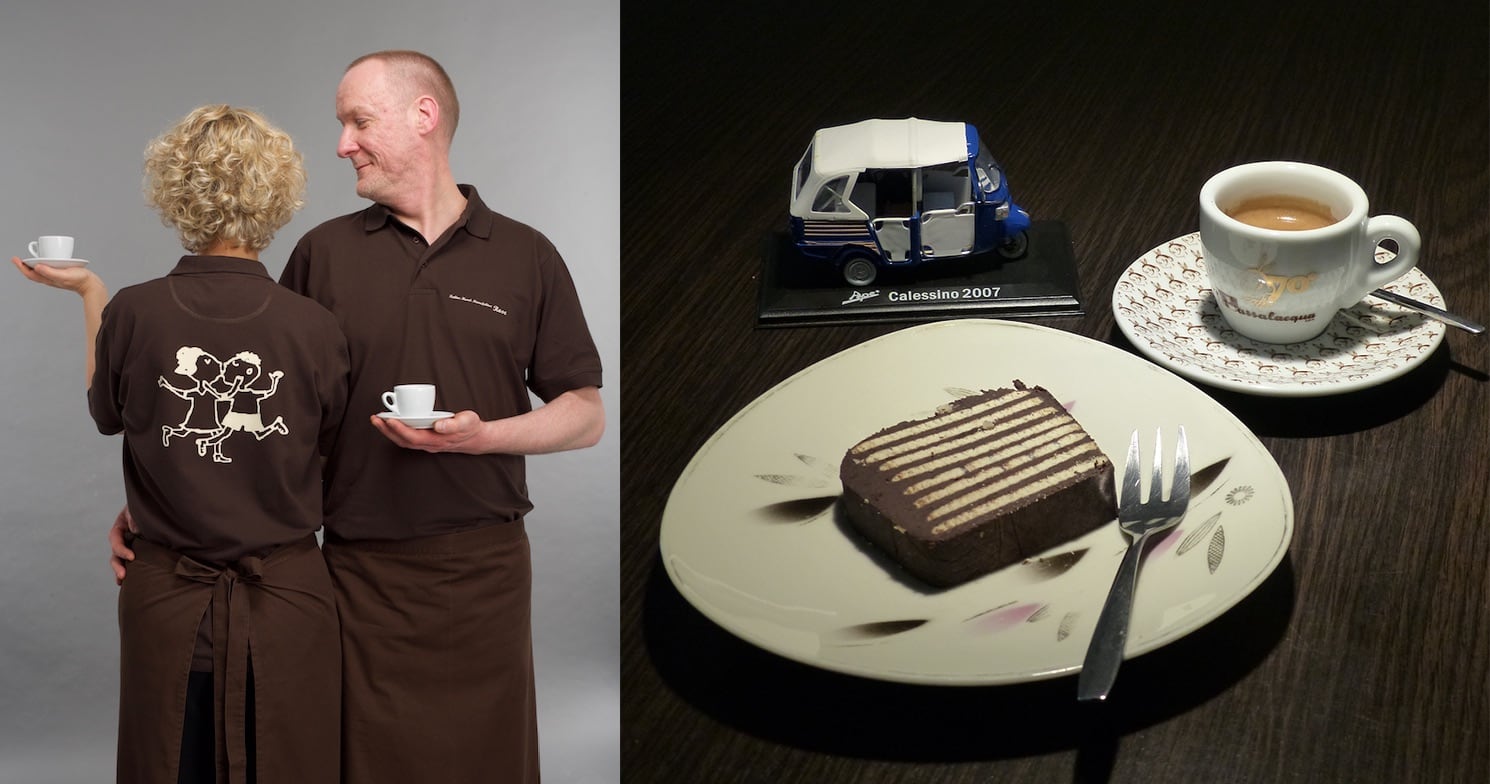 Jens and Viola Rose, owners of the “Zum Kalten Hund” Espressobar in Friedrichshain, Berlin, where they serve kalter hund (a German chocolate cake speciality) with Neapolitan coffee. Photo on the left by Ingo Rast (copyright, courtesy for Wide magazine).

We have known Jens and Viola for almost 15 years now because every Saturday they operate a market stall on the well-known and very quaint Boxhagener Platz Market in the heart of Berlin-Friedrichshain, where they brew and serve ‘Passalacqua’, one of the best Neapolitan coffee brands. They also serve handmade Kalter Hund, a German cake-speciality. This created an obvious link to the Ape project, with espresso coffee being another crucial aspect of Italian, and especially Neapolitan culture. To accentuate this connection between espresso and Ape, we chose ‘Klein. Stark. Süß.’ as the title of the exhibition.” The title is open to interpretation as referring to espresso coffee as well as to the active and charming Ape. 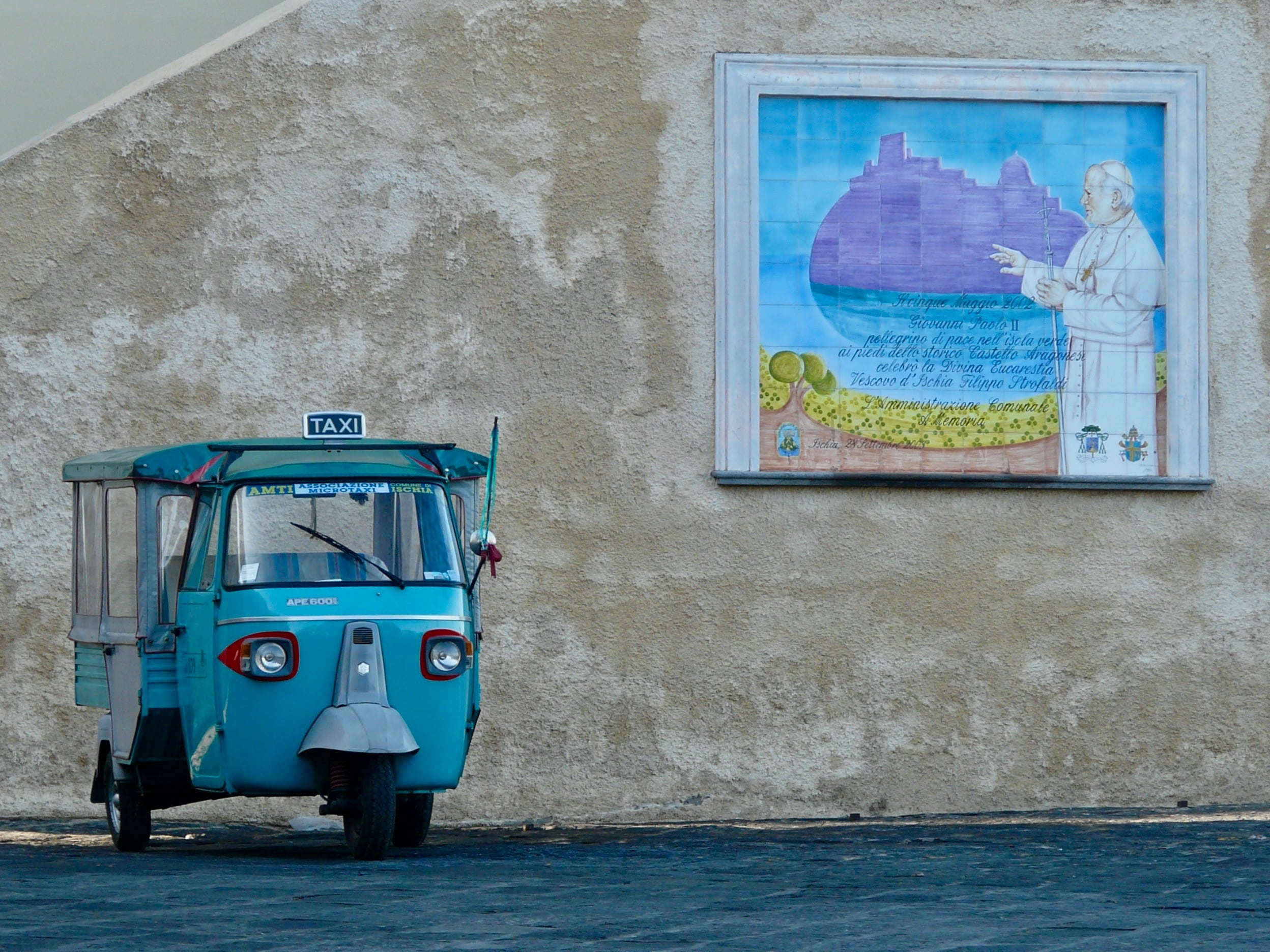 24 APE PORTRAITS.The exhibition consists of 24 Ape portraits and three larger formats. The only picture that does not show an Ape is a scenic view of Mount Vesuvius, chosen - Nicola and Riklef explain - to add some context. “The only photograph that was not taken by us is a historic document from the end of fifties that was given to us by Michele Impagliazzo, an old man on Ischia who told us the moving story of how he was the first on the island to own and operate an Ape Taxi. 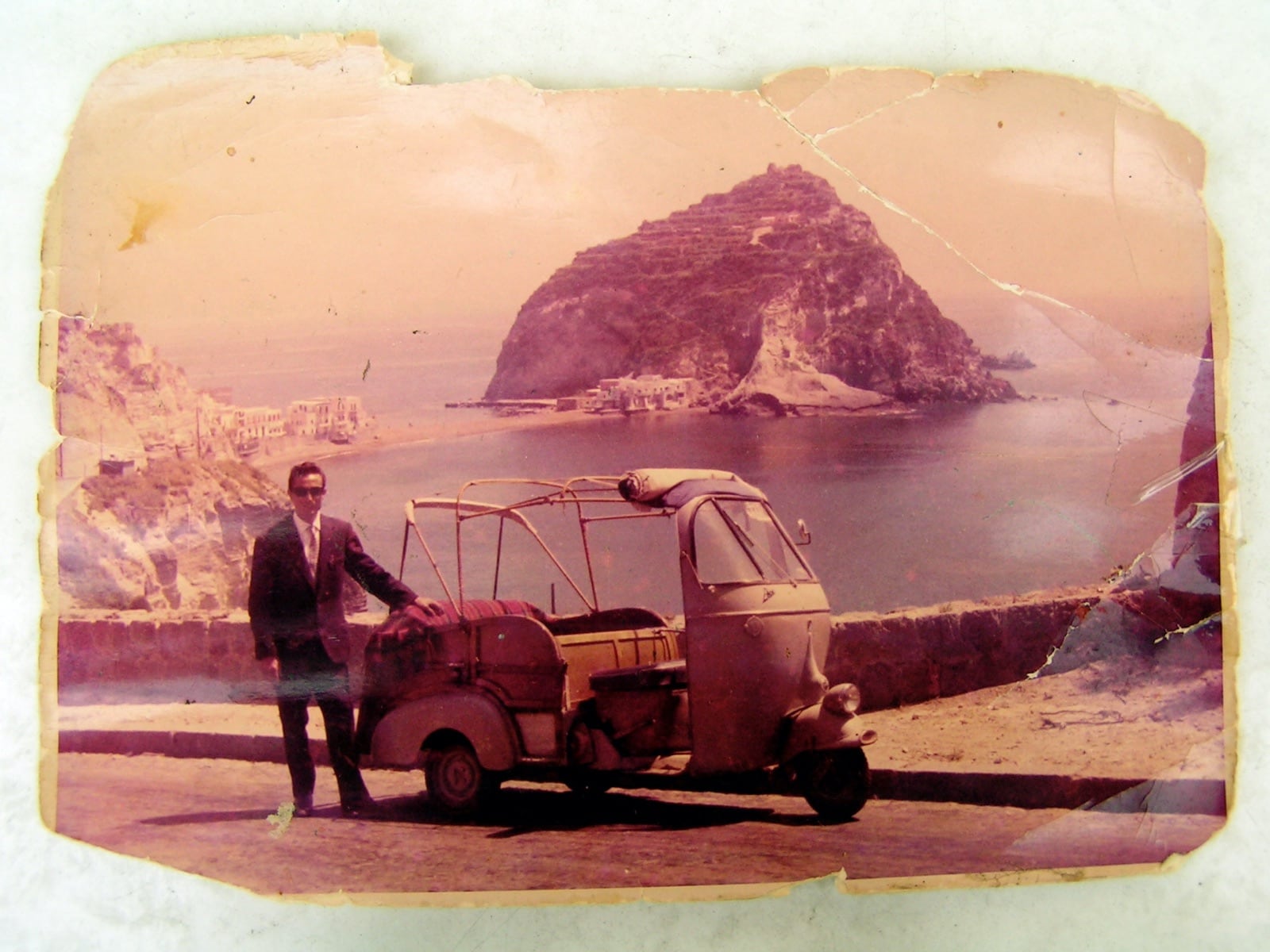 Michele Impagliazzo and his Ape Calessino, the first on Ischia, 1959; photo on display at the “Klein. Stark. Süß.” exhibition by Nicola Moczek and Riklef Rambow, Berlin.

The photo shows him elegantly dressed, posing besides his brand new and tastefully decorated vehicle.” 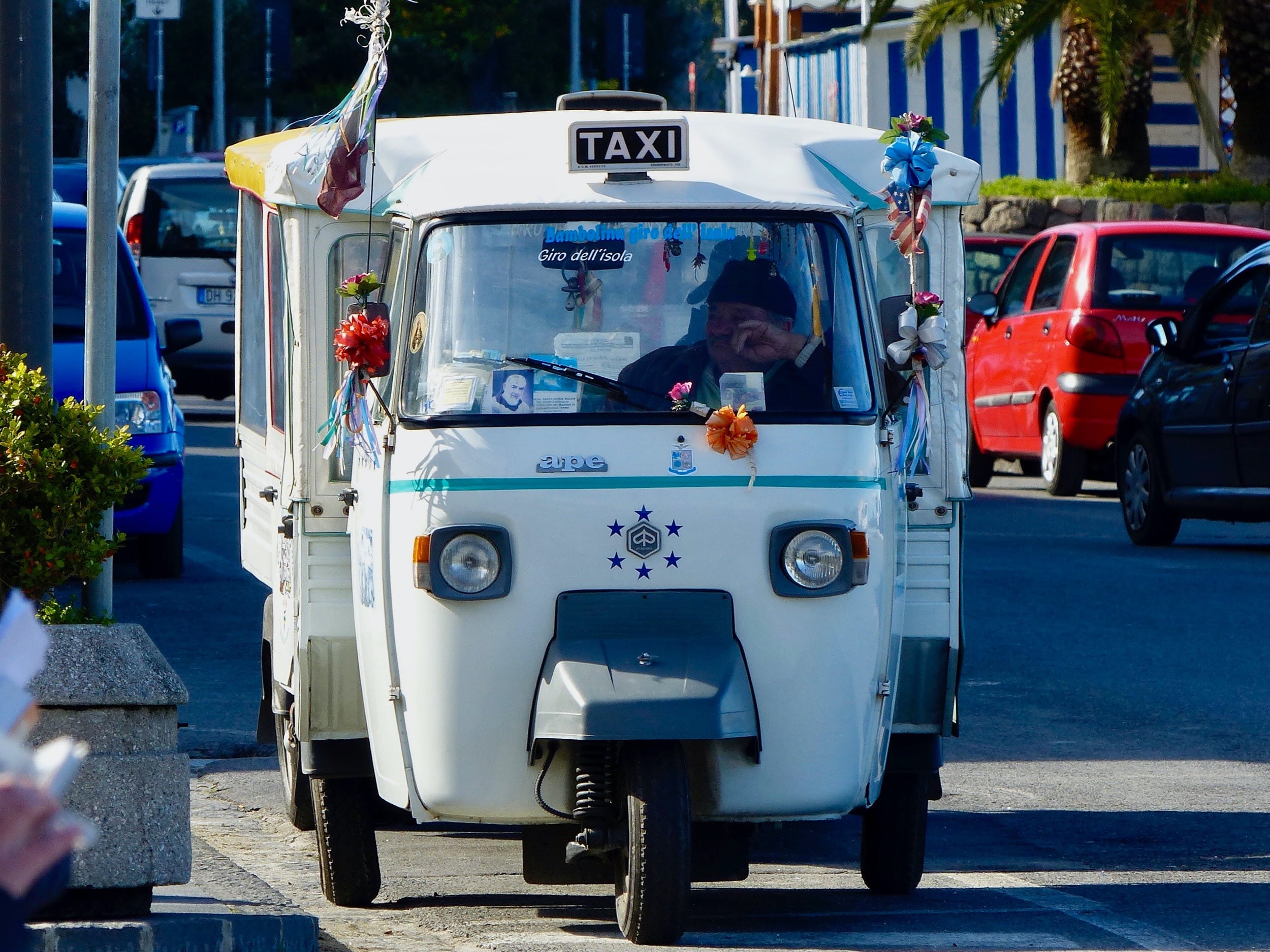 Nicola and Riklef conclude: “The exhibition was opened with a vernissage on November 29th, 2019 with some fifty guests. The ‘Zum Kalten Hund’ Café Bar, being a typical neighbourhood Bar, attracts mainly a regular clientele, including Italians from the South (of Italy, editor’s note) who are very moved by the pictures. Other guests were obviously stunned since they had never heard of the Ape before, not to mention its crucial importance as a symbol of Italian everyday culture. The exhibition will run through March 28t, 2020.” 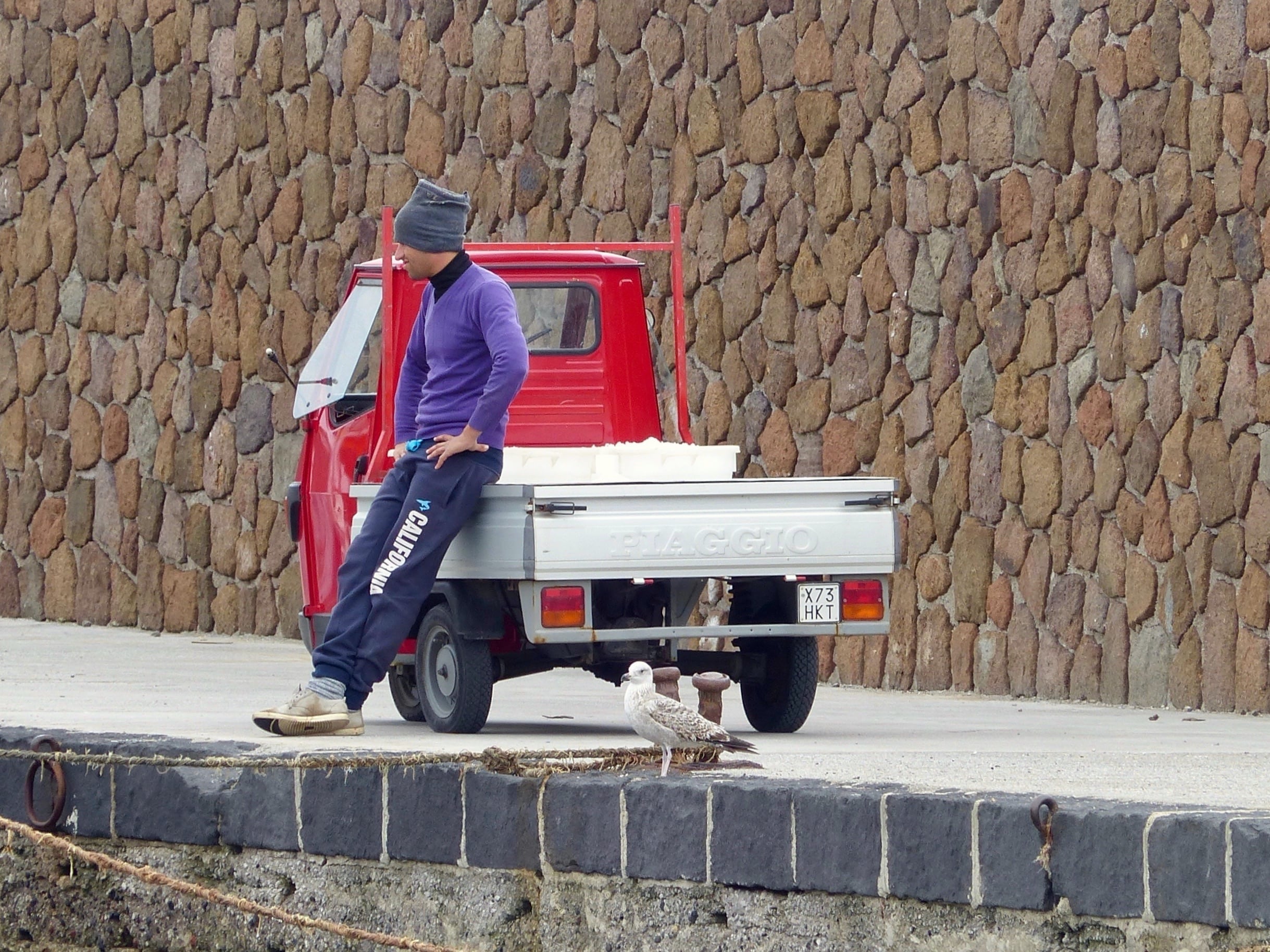