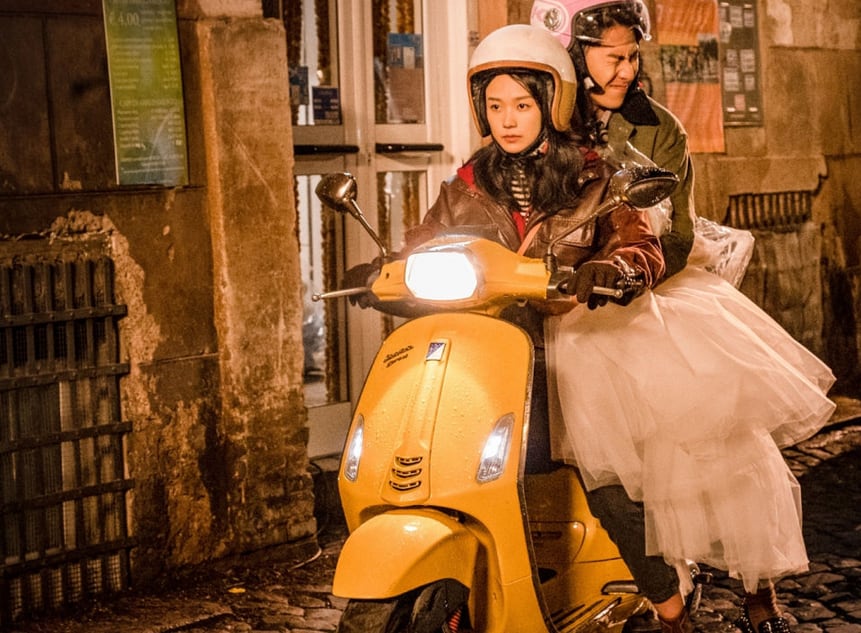 The protagonists of the film, Mandy and Peng, on a Vespa Primavera. Image source:
www.fareastfilm.com/notizie/the-italian-recipe-una-magica-notte-a-roma

April 2022 – The film – which kicks off the Udine Fast East Film Festival (22-30 April 2022), in its global première – “The Italian recipe” is already drawing international attention (Variety also wrote about it), directed by Chinese director Hou Zuxin Hou Zuxin. It is a co-production between China and Italy, a project conceived by Roberto Simone during one of the workshops organised by Bridging the Dragon, a Sino-European film industry association. The initial idea was then developed into a screenplay by a mixed group of European and Chinese writers, and the film was co-produced by Italy, China and Germany, with a mainly Chinese cast using Italian locations and a mixed crew. The film is hence an example of a genuine co-production, and should therefore be able to draw the crowds in both Europe and China - at least that’s what the producers expect.

REMINISCENT OF “ROMAN HOLIDAY. The press has said that it is reminiscent of the famous American film “Roman Holiday” (1953) because of the presence of Vespa, on which the protagonists ride through the streets of Rome, highlighting the “reverse” dualism of the characters. Instead of Princess Anna (Audrey Hepburn, who won the Oscar for the film in 1954) riding through the streets of the capital courted by gentleman journalist Joe (Gregory Peck), it’s Peng, a Chinese pop-idol, who meets an aspiring chef, Mandy, who rides the famous Italian scooter. “Roman Holiday” with Chinese flavours is the definition of The Italian Recipe as it reads in the FEFF 2022 programme (important Asian popular film festival).

It’s a romantic comedy that exploits many of the stereotypes associated with Chinese and Italian people, although in a humorous and gentle way. The film is reminiscent of both classic Italian comedy, which despite telling a simple story with a predictable epilogue is nonetheless entertaining, and the surreal humorous characteristic of contemporary Chinese comedy, of which the Mahua Fun Age group – one of the film’s producers – has been one of the pioneers since the film Goodbye Mr. Loser (2015).

SYNOPSIS. Peopled from the very first scene by over-the-top characters, The Italian Recipe tells the story of the encounter between Peng – a Chinese pop-idol who goes to Rome to film a supposed reality show with a Chinese starlet – and Mandy, a Chinese teenager who emigrated to Italy with her parents as a child and who aspires to become a chef. Mandy is a typical example of the generation of Chinese people born or raised in Italy, who straddle two cultures. 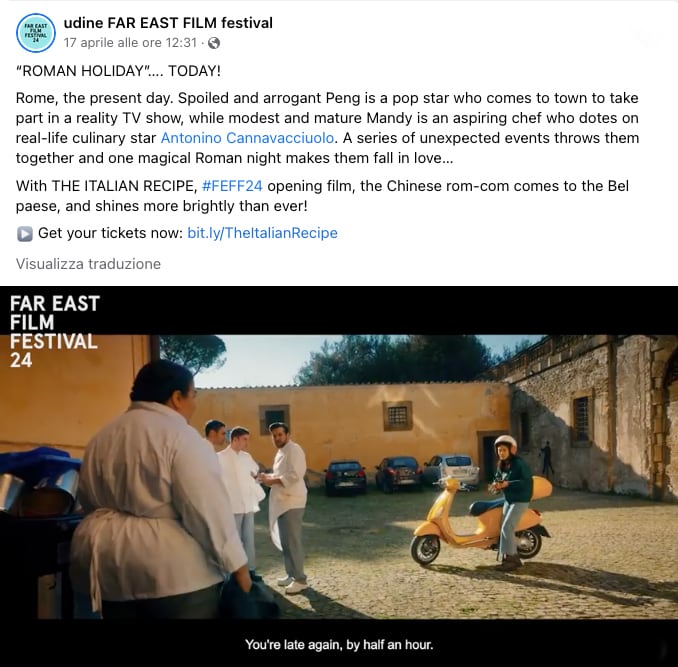 Her family runs a laundry where everyone works hard, and her parents force her to go to university and study law despite her secretly aspiring to get a scholarship to study with a renowned Italian chef (Antonino Cannavacciuolo, note’s editor). Mandy speaks perfect Italian, knows Rome like the back of her hand, rides around on a Vespa, but she occasionally substitutes one of her Italian friends as a chauffeur for a hotel in the city centre. It is in this role that she meets Peng, a young Chinese singer who comes to Rome with his coterie of hangers-on who, unlike Mandy’s traditional family, hail from the cynical and superficial world of the contemporary Chinese glamour industry.

Peng is a more complex figure than he initially appears to be: he is frustrated by the fact that he has not yet achieved mainstream success and hopes to make it big with the reality show, but secretly detests the superficiality and greed that surrounds him and wants to become a serious songwriter. The encounter/clash between Peng and Mandy, which will change both of them, is punctuated by misunderstandings, twists and turns, and romantic moments, and takes place against the backdrop of the breathtaking landscapes of postcard-perfect Rome – only the opening and closing scenes of the film were shot in Beijing, before the pandemic put a stop to film and television productions. The interactions between Peng, with his entourage of greedy and smarmy individuals, and the Italians they meet during their brief stay in the capital result in some hilarious scenes, building a bridge between two cultures.

The Variety article:
variety.com/2022/film/news/italian-recipe-to-open-udine-asian-film-festival-1235230857
Posted on Facebook by Bridging the Dragon:
www.facebook.com/bridgingthedragon

THE DIRECTOR . Hou Zuxin (Beijing, 1987), a graduate of the Chinese University of Hong Kong in 2009 in sociology and journalism. She worked as a journalist for the South China Morning Post and the Beijing Youth Weekly. She has written and directed short films and documentaries, including My Dad’s a Rocker dedicated to her father Hou Muren, one of China’s rock music pioneers. She is also a singer, and in 2012 was a finalist of the Chinese TV show Voice of China. She divides her time between China and the USA. The Italian Recipe is her first feature film as director. 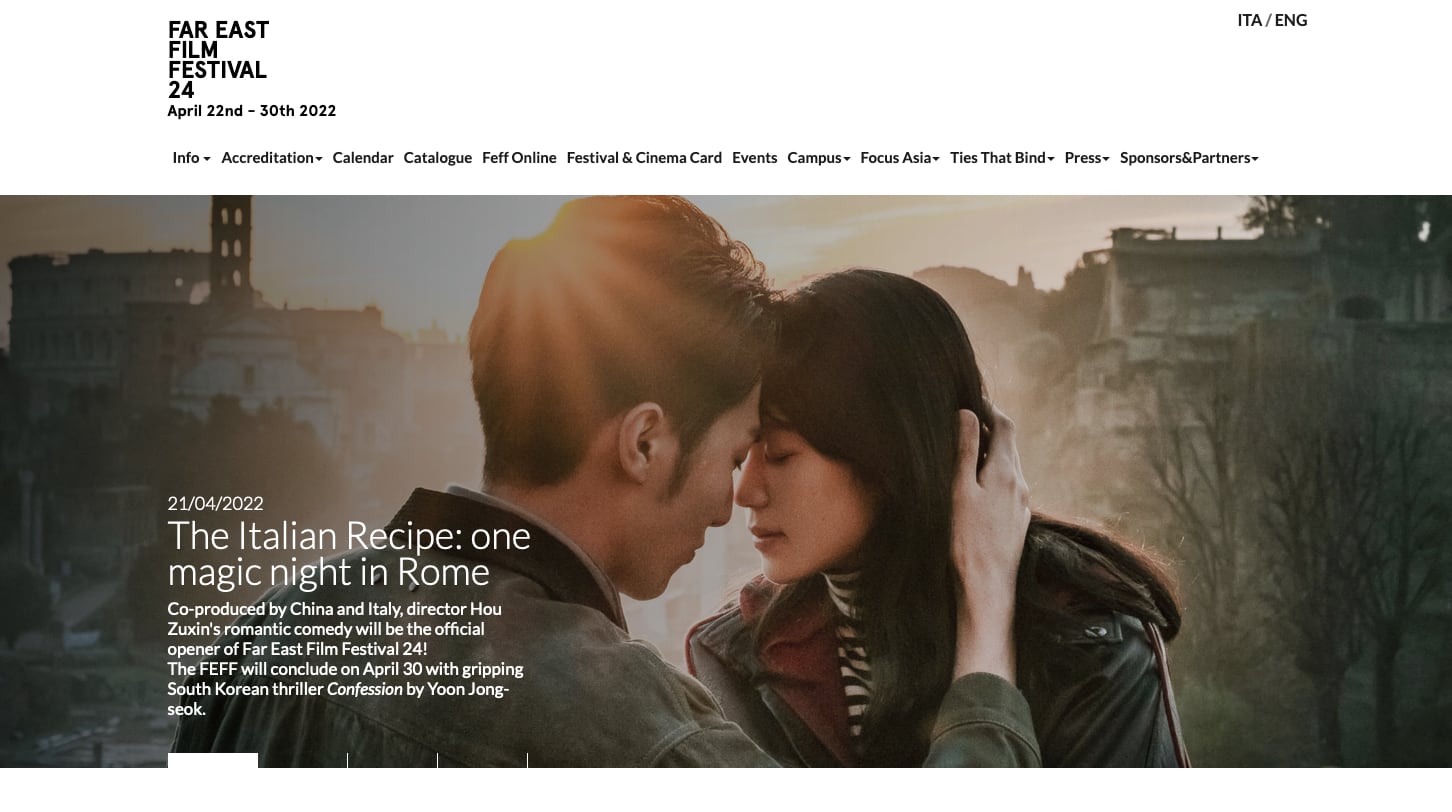