AWARD-WINNER AT THE 2021 BIKER FEST NTERNATIONAL

October 2021 – A multiple award winner, both at the first round of the Italian Motorcycle Championship, IMC (within Motorcity in Montichiari, Brescia) and at the IMC finale within the 35th Biker Fest International 2021 (in Lignano Sabbiadoro, Udine), the special Moto Guzzi on V50 base by Remastered Cycle has attracted attention. Wide magazine asked customisation workshop Remastered Cycle to tell us about their passionate work and how they re-invented the MG V50.
“Founded by Morelli Luca and Samuele Borsarini, Remastered Cycle has been operating in Brescia since 2009. They work exclusively on transforming motorcycles of any brand or model into scramblers, bobbers, café racers, or flat-track racers, in order to make two-wheeler dreams come true for all those motorcycle enthusiasts who want to stand out from the masses by using a product that has been custom-packaged exclusively for them. We follow the customer in their needs and desires from start to finish on the project so that the work is faster, certain, and painstakingly done down to the smallest possible details in order to achieve a 100% satisfactory result.
As of right now, we have made more than 100 motorcycles, many of which have placed in and won some of the most important national custom competitions and have been published in the most important specialised periodicals. 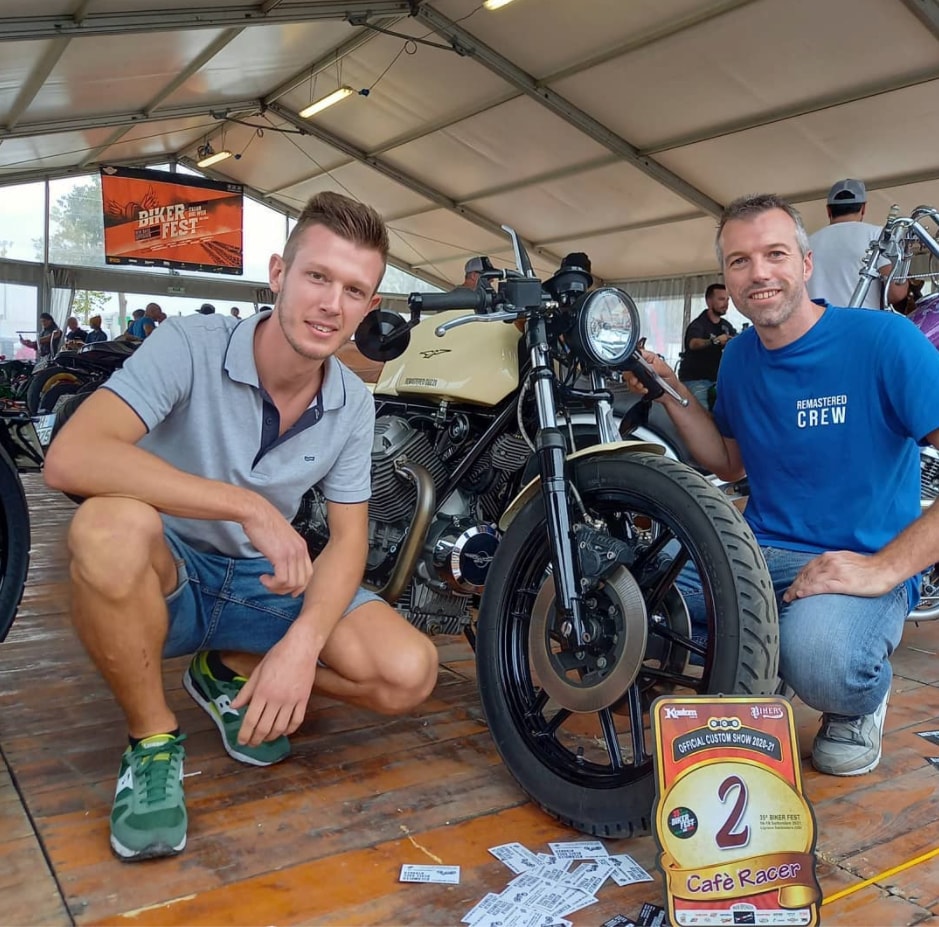 The 35th Biker Fest International 2021 (Lignano Sabbiadoro, 16-19 September, Italy), hosted the Italian Motorcycle Championship, one of the most renowned international Custom Shows. One hundred special bikes registered, with customising teams from all over Italy and abroad (Austria, Germany, Belgium, the Czech Republic, and even Australia and the United States). Remastered Cycle’s MOTO GUZZI V50 placed on the podium in the competition: 2nd place!
Image source: www.facebook.com/remastered.cycle 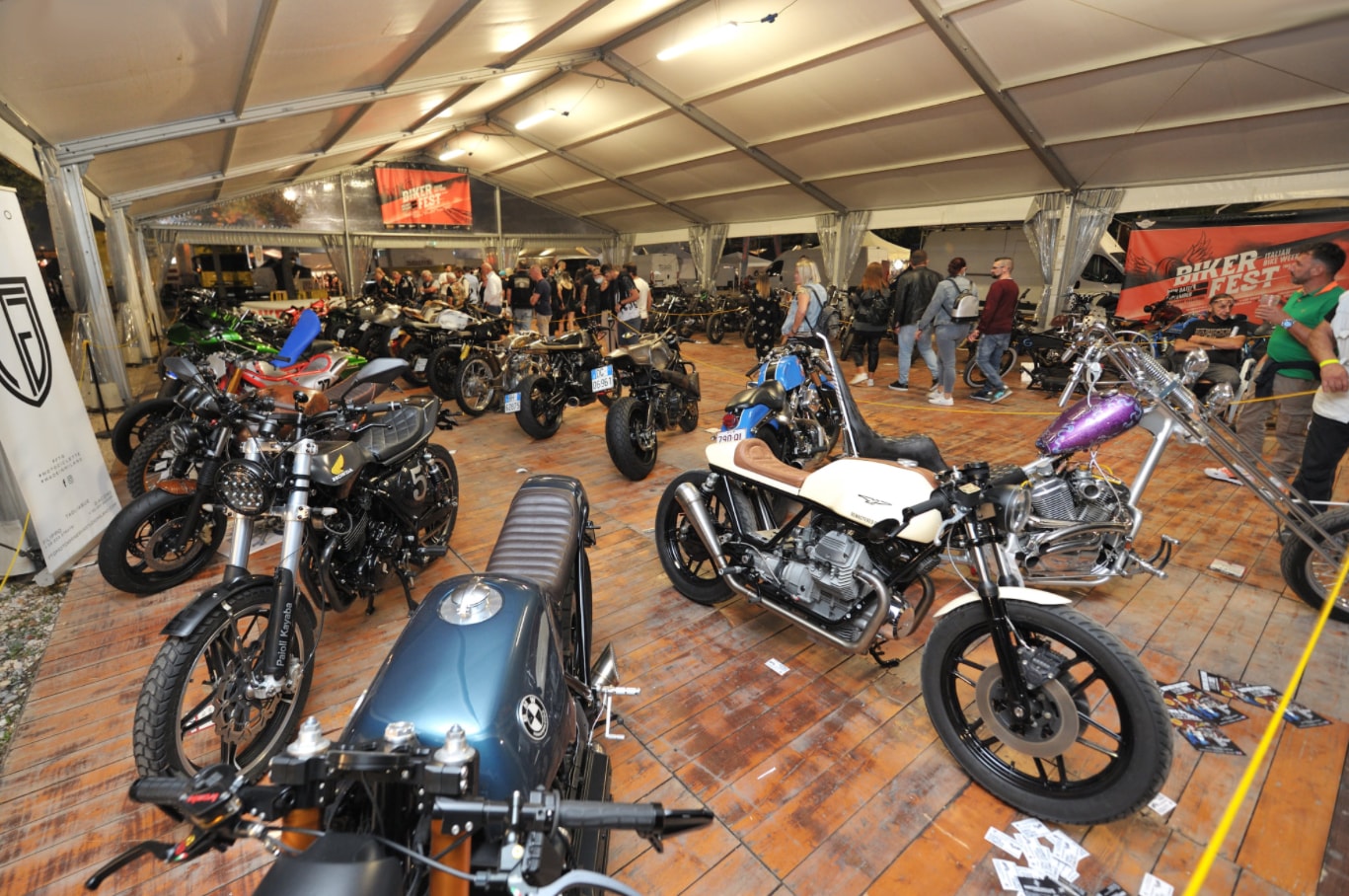 From the beginning of the year, we also started sharing some of our Remastered creations on our YouTube channel so that we could give do-it-yourself customizers a hand and we now also offer a consulting service to point out which direction to go in order to start from scratch and end up with a finished Special, without all those hidden risks that come with an independent project.

The Moto Guzzi in question is a 1978 V50 very little of which is still original. The fuel tank and the tail were custom made by hand in aluminium, the forks cut and lowered, lateral license plate holder custom handcrafted, electrical system entirely overhauled and rerun, braking system replaced with Brembo front and rear master cylinders and Motorquality mesh lines, rear brake and gearshift support linkage changed and handcrafted, frame emptied and cleaned with modifications for tail supports, etcetera, and insertion in the end part of the turn indicators that also act as parking and brake lights. The exhaust pipes are approved and custom made by Bsexhaust. The saddle and the leather strip are handcrafted. The headlight is a skyline, the odometer is a Koso TNT, highsider mirrors, chromium semi-handlebars, and the plate over the gearbox and the cone filters in aluminium complete the job.

We were commissioned to create this project that was conceived by Mattia Rocco, who has always been a two-wheeler enthusiast and who grew up with motorcycles and the smell of petrol at home, since his father is a motorbike collector. But he wanted something different - something that no collector would be able to have - and that’s where the idea of a Special in café racer style was born - Italian, with elegant colouring but with a sleek line and the lightest possible visual impact. It couldn’t be anything other than a Moto Guzzi, but one of those old ones that still have carburettors, that make you get your hands dirty every now and then, that remind you to close the fuel petcock when you’ve finished your ride. In short, one of those bikes that have a soul. This led to the choice of a pre ’80s era V50… I should point out that Mattia is 24 years old and is the youngest of member of the Remastered CREW, but he has an incredible passion and knowledge of motoring. 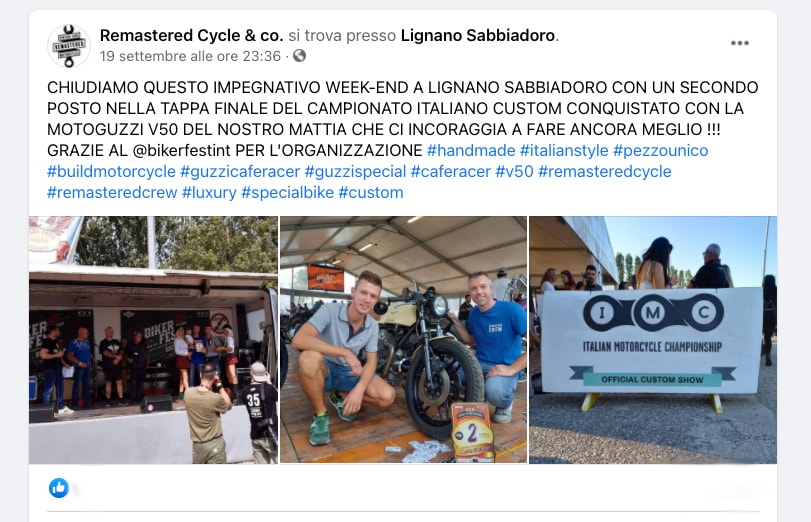 The Guzzi in question participated in the finale of the IMC (Italian Motorcycle Championship) in Lignano Sabbiadoro, within the setting of the 35th edition of the Biker Fest, earning second place, a result it had also achieved in the first round of the IMC, held during Motorcity in Montichiari (BS). We are extremely proud of this result, and it motivates us to do even better. I wish to thank the entire event organisation who, as always, worked impeccably despite all the bad weather and the Covid related problems. I'm sure we’ll be there again in 2022 and we’ll be in the battle with all kinds of mods to take the top step of the podium with more REMASTERED CYCLE bikes.”
Morelli Luca by Remastered Cycle.