ALESSANDRO MINNELLA’S ITINERANT BOOKSHOP: WITH HIS APE HE TAKES BOOKS AND CULTURE TO MARKETS AND HOMES 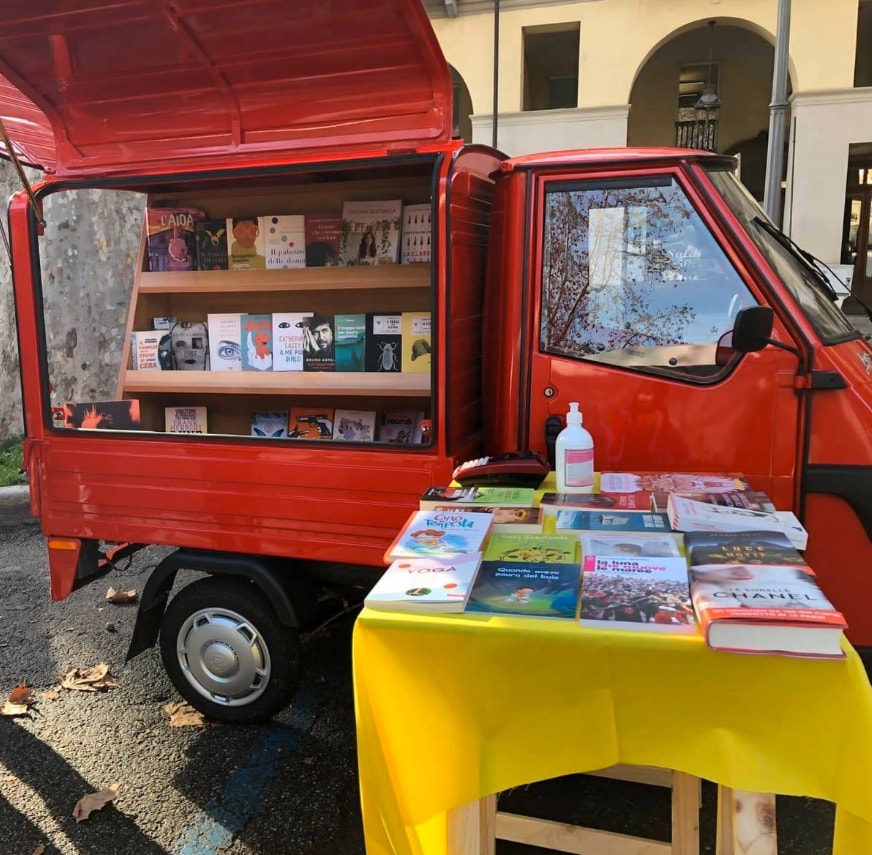 March 2021 – “A man who reads is worth two”: the famous quote is by Valentino Boppani (Italian editor, author, playwright), and Alessandro Minnelli certainly likes it, a 27-year-old young man with a kind face who is always ready with a smile, even under his facemask. He has a great passion for books, so much that he stubbornly decided to make a livelihood of them. And he succeeded. To achieve his dream, he even left his job in glassworks and, with the money he had stashed away between savings and severance, he invested everything in his idea of working in freedom. And he did it during this difficult time, which is even more of a plus for this courageous lad who loves books. 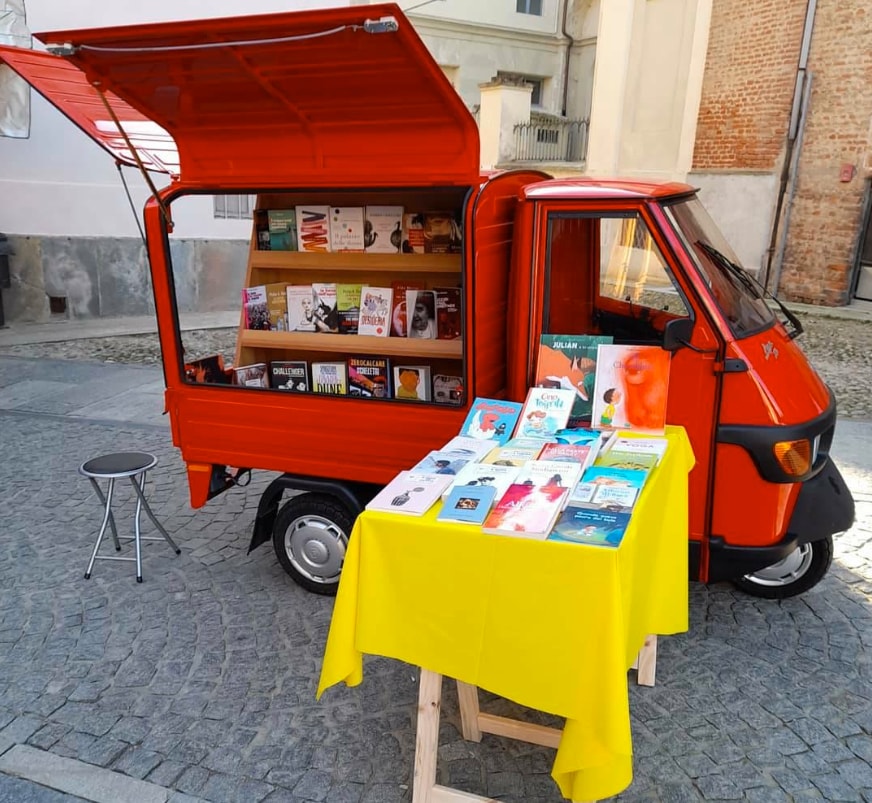 His charming work companion, with a bright red livery, is an Ape: the small and agile commercial vehicle by Piaggio transformed into a bookshop on the road. With his street trader’s permit in pocket, Alessandro makes the rounds of the markets in his area, especially Asti, but also San Damiano, Isola and other towns in the Piedmont territory (Northwest of Italy). Alessandro arrives, opens the rear door to reveal the shelves filled with books, sets up a table to display books in front of the vehicle, and his street bookshop stand is ready. 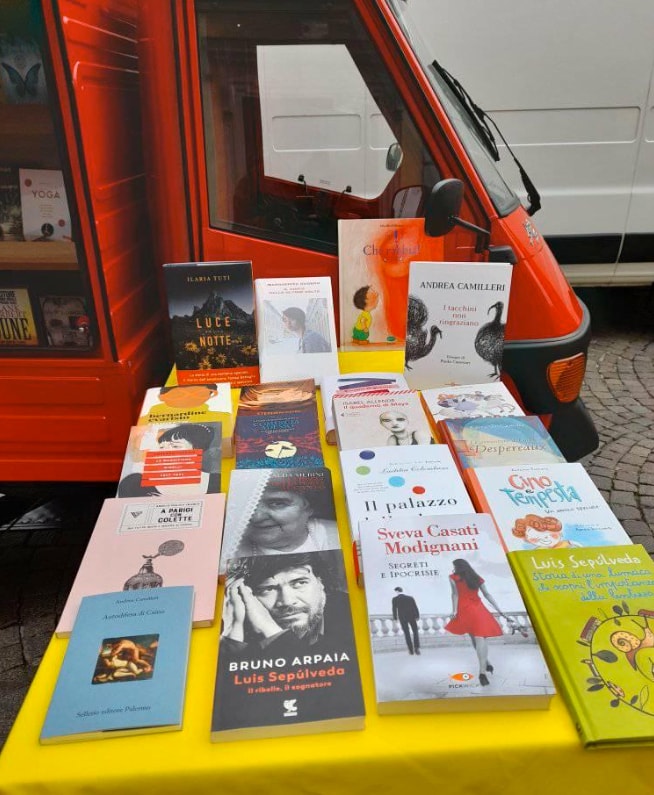 Local newspapers and regional periodicals have reported on his “small business”, and he even did a video interview that was published by an important national publication. He is more surprised than anyone at all the interest, as he mentioned to his customer-fans on his Facebook page, which he uses to announce regularly where he can be found, in which market or public square, and he invites everyone to: “look for the red Ape!” Which has by now become his “distinctive sign”. His top customers? Mainly children: “In fact, besides novels and short stories by contemporary and classical authors, I offer a vast selection of books for children. Their mums come to the market to do their shopping and they stop with their children at my bookshop on wheels.” He also explains that, along with the titles that can be found more or less in any bookshop, he also offers works and graphic novels by small, independent editors in order to introduce young authors. 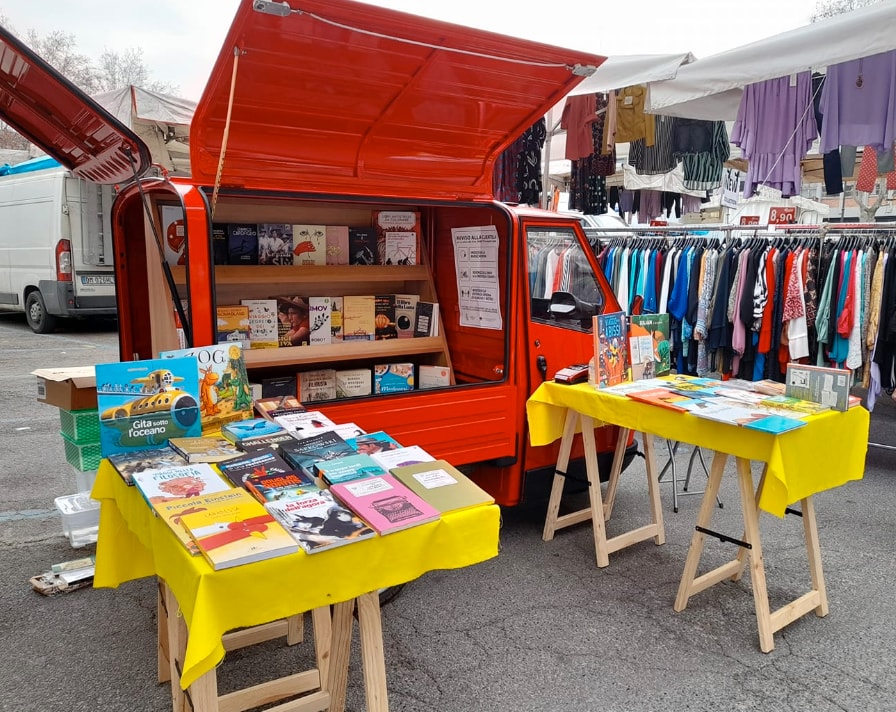 In short, those who thought him mad to leap into this enterprise were forced to change their opinion: with the help of a body shop and a carpenter, the young man set up the Ape in itinerant bookshop version, exactly as he had imagined it. Now, in addition to “working the markets”, as the street vendor’s say, he also does home delivery of his books to those customers who request it. A useful and appreciated service.
Books, freedom and a red Ape: this is Alessandro’s new life.

Click to enlarge the images
(articles and interview with Alessandro, by Italian newspapers).

Translations: below – “A man who reads is worth two” (Valentino Boppani); in the right background image – “The world is a book and those who do not travel read only one page” (St. Augustine).