September 2021 - Damien Fricker, 34 years old from Bristol (United Kingdom) is an Aprilia fan who doesn’t settle for riding an RSV4 1100 on the roads - he loves the track. And astride an RSV4, it’s easy for anyone to feel like a bit of a race rider. However, a race rider for over ten years, he is also a champion now: In England, Damien races in the national championship – NO LIMITS RACING CUP 1000 – less well-known than the BSB SST-British Superbike Championship (where the English team IN COMPETITION competes with great success on Aprilia RSV4), but which boasts a host of fans and the participation of many riders, teams and bikes from all the major brands. Damien won the 2021 Cup one round early with his RSV4 1100 Factory (No. 17) outfitted with an apx kit provided by Ian Newton, demonstrating that his passion is truly “no limits”. 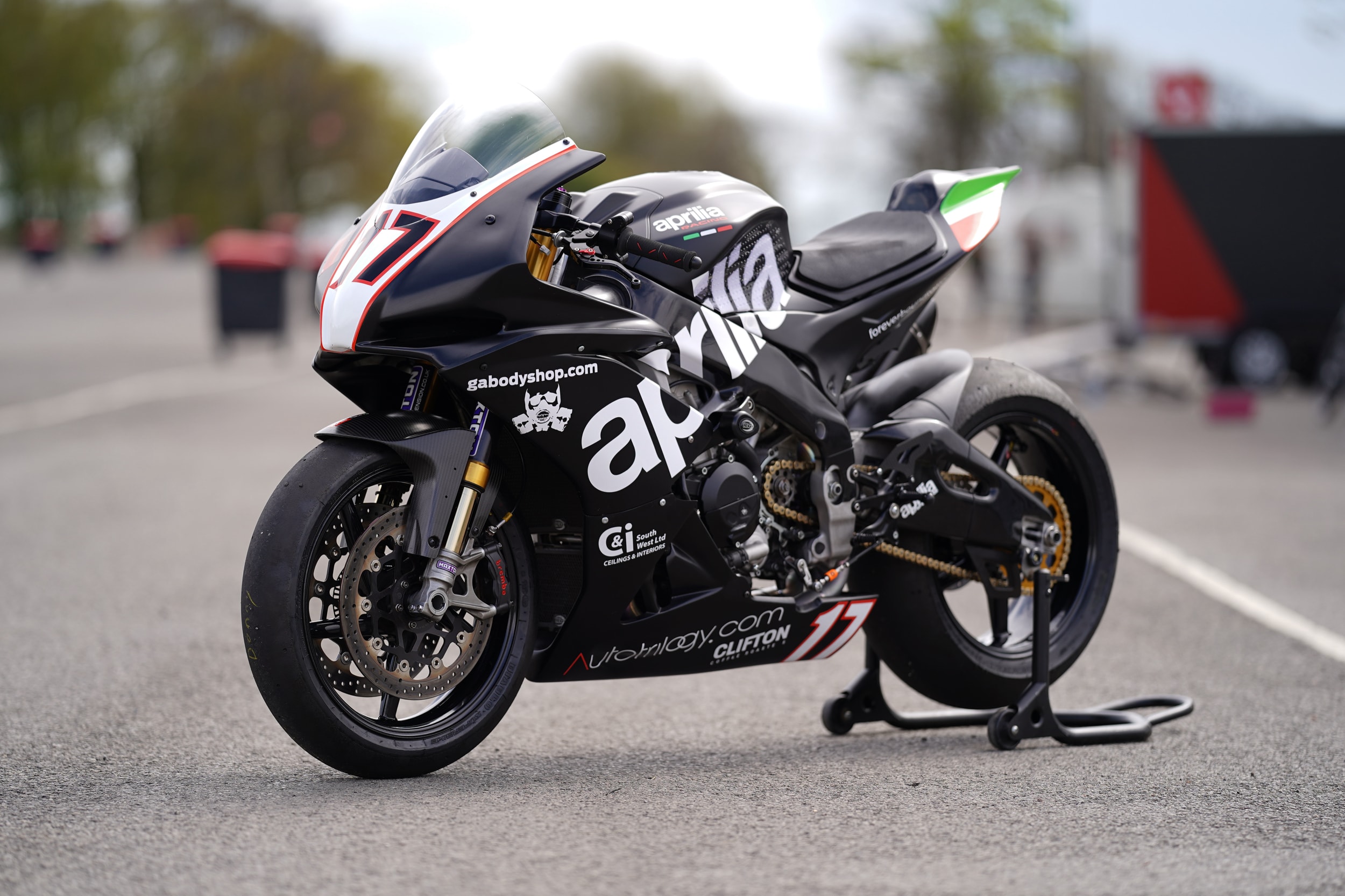 Not only that, but he decided to share all of his enterprises on the track with Aprilia Racing, sending photographs and detailed race reports. We wanted to get to know him better, and here is what he told us at Wide magazine.

Profession. “In Bristol, I own a Detailing and Paint Protection Film Company called Autotrilogy Limited, (https://autotrilogy.com). We provide a Protection Film to help eliminate scratches and stone chips to most vehicles, including Ceramic Coating and Storage solution for cars.”
Racing Career. “II have always loved motorcycles and decided to go racing some years ago, in my very first year on track I finished second in the Novice Championship. The following year I signed for a local team to ride an R1 Superbike. Pre-season I had a Motor-cross accident resulting in ACL and PCL ligament rupture, including breaking my Tibia. The doctor said it would be at least 1 year before I rode again. Three months later I was testing the bike, my team told me that in my first race I should just try to be top 10. I went out and won the first 6 races of the season, which was amazing! I ended up runner up in the NGRCC power bike championship and also the open championship against much more experienced riders.”

The jump up to Superbike. “Leaving the team at the end of that season, I decided to go with my father and race in the British Superbike Championship in the Superstock Cup. This was a big jump in competition. We started pretty well but lack of experience with set up and the track knowledge showed and our results were up and down. The following year I remained on the Suzuki and our results got better as the year progressed, consistently challenging for top 10 positions. Unfortunately, due to finances and issues out of my control, at the end of the season I was forced to retire from motorcycle racing, leaving the sport I dreamt of being my career. So early and at a young age was very hard to take. It had been a dream to race Superbikes and in a short time we had really grown but unfortunately I had to walk away.”

The “magical” encounter with Aprilia. “I decided I would never race again but I could never get it out of my system. In 2019 and some 10 years since I rode, I decided to buy a track bike. I had always loved the look and sound of the Aprilia RSV4 and managed to buy a 2011 RSV4 Factory. My first day was at Donington Park GP circuit. As soon as I got on the bike and rode the first couple of laps I fell in love. Instantly I could feel just how good the bike was and the feedback from the chassis was incredible. I instantly gelled with the RSV4 and as the year went on we were getting faster and more comfortable with the bike, so we decided to once again go racing. As the 2011 bike was a bit under powered compared to the new Superbikes, we decided to purchase the 2020 RSV4 1100 Factory in January and started our testing in Cartagena in February. Unfortunately, with the very sad situation of the Covid pandemic, things were cut short so I couldn't really get much set up time with the bike. At the end of 2020 I did a couple of rounds with No Limits racing Championship, but I struggled and unfortunately we were off the pace, placing around the top 10 with a best result of 6th at Donington at the end of the season.”

2021 Season: Champion! “Through the winter I trained harder and prepared better than ever for the 2021 season. The first race weekend was at again Donington park National in the No Limits Cup 1000 championship. I took Pole Position, Fastest lap and won all 4 races. It was a truly great start to the season and the bike was incredible. As the season progressed, we went from strength to strength with the bike, even going to tracks I had never ridden before we still managed to find a good setting with the Aprilia, eventually winning the championship back at Donington park GP in August 2021. Our season consisted of 17 race wins, 3 x 2nd places, 1 x 3rd place and 1 x 4th, winning the title with one round to go.” 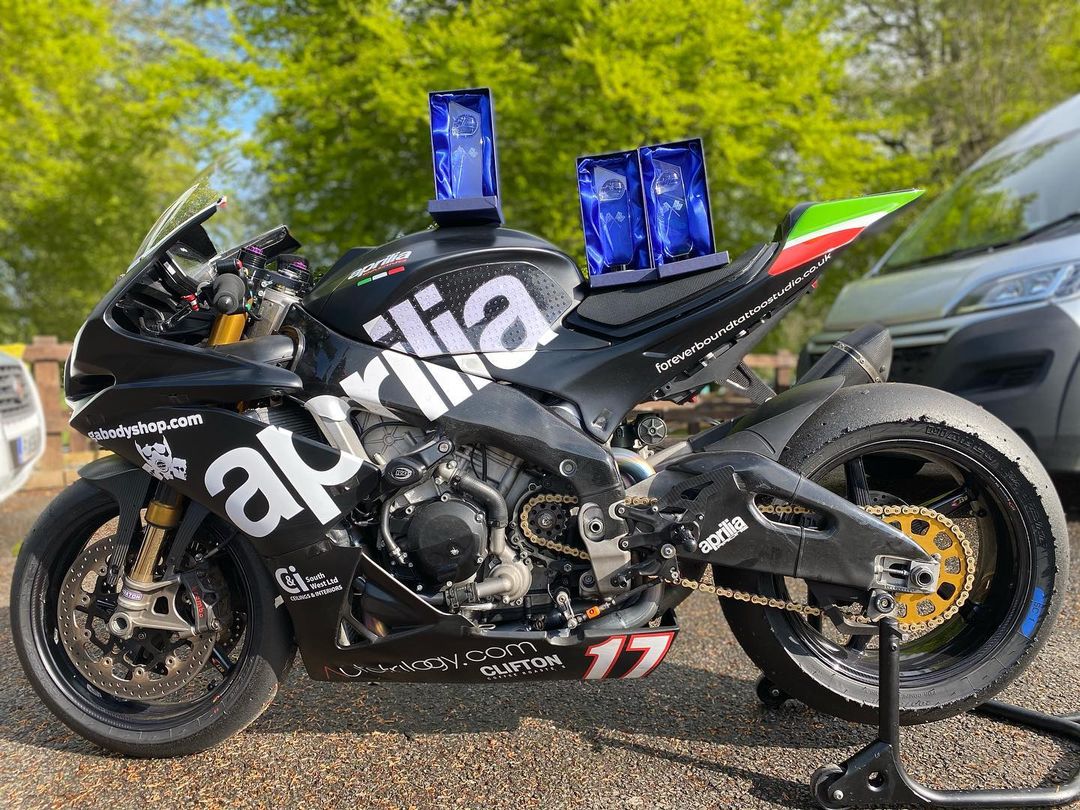 Thanks Aprilia! “The RSV4 1100 Factory has performed incredible every weekend, through every condition you could imagine - both riding and track. I cannot compliment Aprilia enough for the bike they have built and for all the help they have given me over this season. The Aprilia for me just gives me everything I could want from a Motorcycle. The noise, power, and handling are like nothing I have ever experienced and, even though we are racing with all the stress that can come with this, first and foremost I just love riding my bike and it never fails to put a smile on my face. It truly is a great bike to ride, and I feel like we like we are nowhere near the potential of the RSV4. The help I get from Aprilia has been incredible, I feel like I am part of the family, and I can't thank Omar Ferro and the Aprilia Racing team enough for all the help they provide me.” 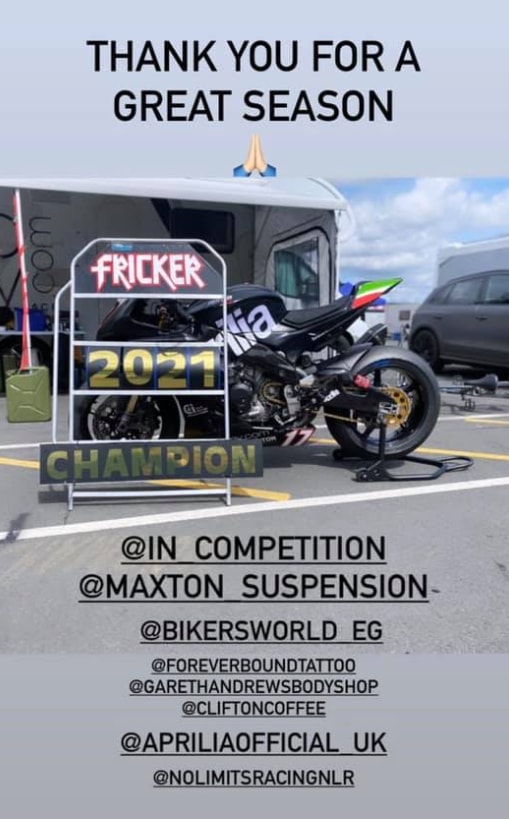 What a team! Fricker & Co. “My team for the 2021 season consists of my father Bill Fricker, my good friend Chris Pouard and myself, I must also thank Maxton Suspension for helping me with my suspension, also Ian Newton from In-Competition for all the help, advice and support over this past season, also Jon at Bikersworld EG for the help with the preparation on our bike. We are now looking to build on our 2021 success and experience with the Aprilia by moving into the Pirelli Super Series 1000.” 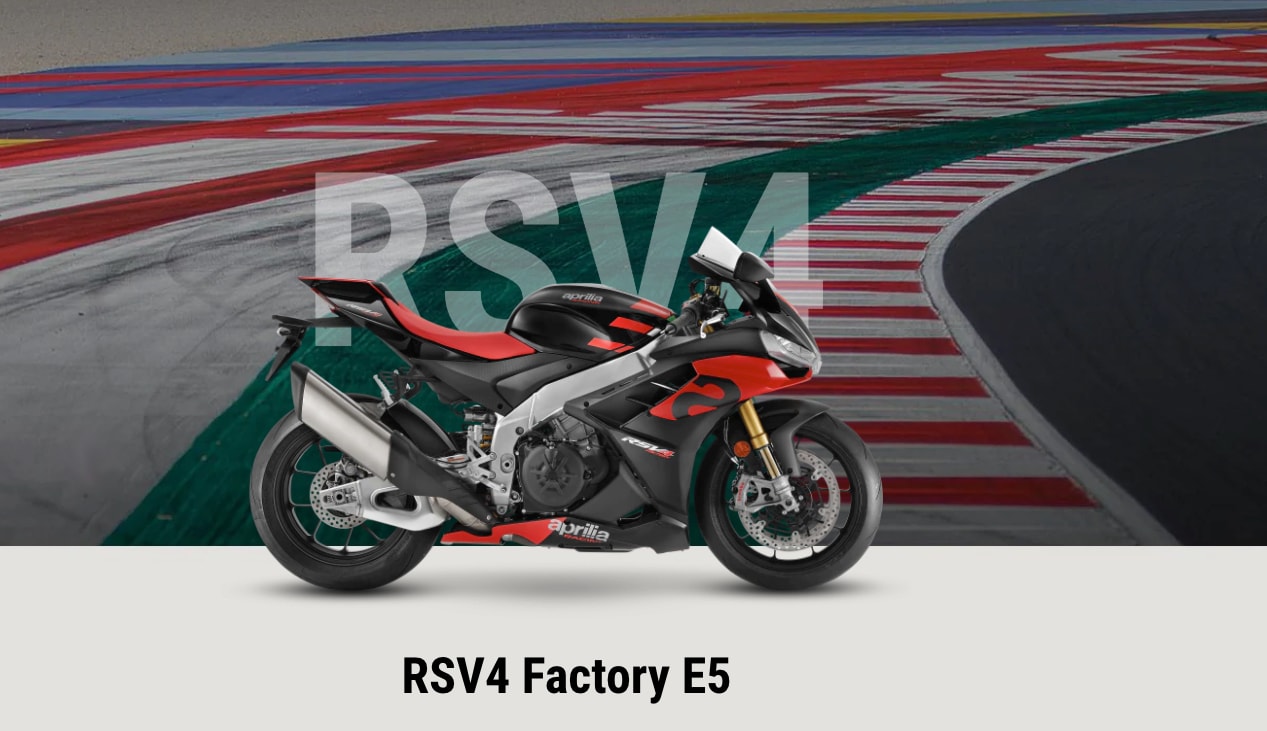 We would like to thank Damien for this genuine “racing testimonial” and of course we wish him all the satisfaction in the world for his future seasons on the track, considering his passion and determination. And we wish him and long-lasting and happy “love story” with the fantastic and high-performance Aprilia RSV4 Factory. We dedicate this video to him and all Aprilia fans & riders.