“DEDICATED TO MY GIGGINÈ”: LUIGI SALAMONE’S VESPA MEMORIES. FROM LOVE AT FIRST SIGHT WHEN HE WAS 13 TO THE PX 150, PASSING THROUGH FLORIDA

On the left, work of Piedmontese designer, artist, and cartoonist Paolo Mottura (https://www.facebook.com/paolomottura10/), dedicated to his ‘Vespista’ friend Gino Salamone, depicted with his beloved Vespa ‘Gigginè’ and his grandchildren and, in the photo on the right, with his Vespa PX 150 E.

From Luigi Salamone (Pinerolo, Turin, Italy), December 2021 – “It was 1954, my first photo on a rocking horse, and a few months later another photo posing beside a horse.

Then once again astride (but without a photo) the red ‘Guzzino’ dad had modified for his job as a street vendor. At my extremely young age, I liked that sound, that smell - I liked bikes. And in that post-war Sicily, motorbikes were the means of transportation for many (especially for young people or those who were unable to purchase cars).

Dad bought a Fiat Topolino Belvedere and that was our means of transportation for many a Sunday outing with my family. Always a petrol head, I grew up in the midst of car tuning for uphill races and tales of the legendary Targa Florio race. Until I reached the age when I could leave my kick scooter behind (strictly hand-built) to move up to motorbikes. But how to buy one? There was no ‘allowance’ in my family. We worked and that money - 300 Italian Lire a week (Sunday from mum’s purse) - was used to go out with friends. 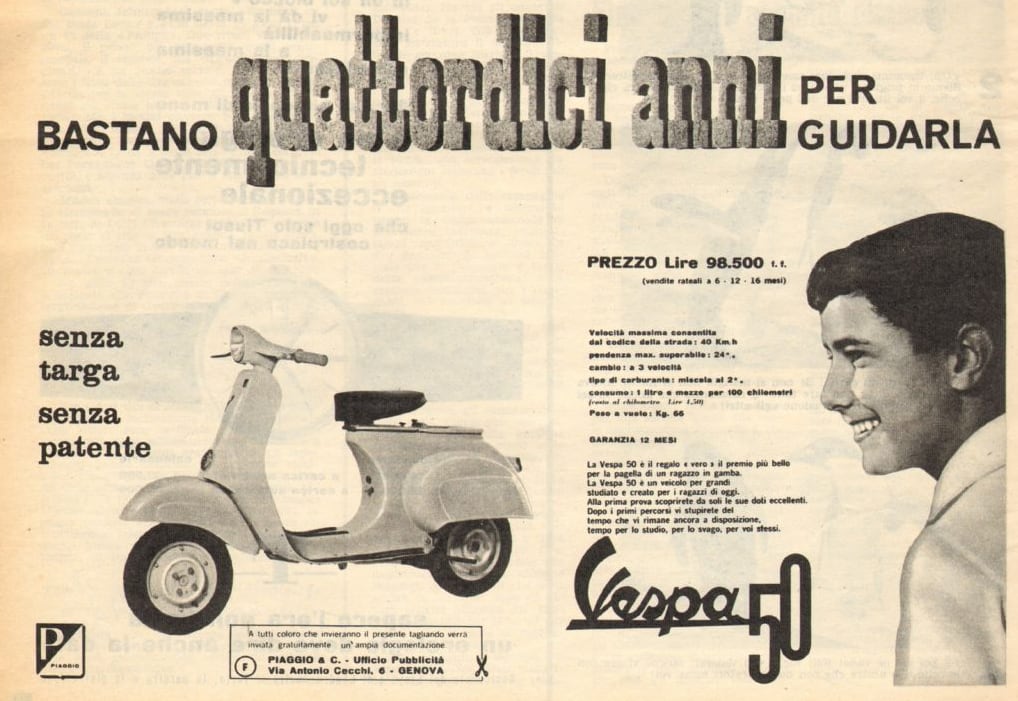 It was 1966 when I swung a leg over a Vespino 50 in Palermo for the first time, hired for an hour with 200 Italian Lire. From then - I was 13 years old - once I got off to return the hired Vespa, I dreamt of having one of my own, a vehicle for myself to be independent, to see new things, unknown locations, and people who spoke other languages.

Luigi Salamone (Gigi for everyone) in “service” with a hovercraft and, on the right, at the controls of another “amphibian” craft.

A personal dream that can true after many years of life, sacrifices, not enough time to dedicate to this ‘dormant’ passion. Extremely dormant and often ‘betrayed’ by operating and working with a hovercraft built by Mastrangeli with a Moto Guzzi V7 engine, or by riding in another hovercraft in American with a Chevy 488 small block, later moving on to an ever-growing passion for 4x4 vehicles, so much to arrive at the international Camel Trophy selections. Intersecting over time with the purchase of bikes like Laverdas and Moto Guzzis. At the end of the year 2000, I ‘gifted’ this passion of mine for two wheels to my children, with the classic ‘cinquantino’ Aprilia and Laverda, a passion that they then continued with Moto Guzzi.
My ‘dormant’ passion had almost been forgotten since that distant time in 1966, riding without a helmet or goggles, with the wind in my face at 70 km/h, tears streaming back ‘horizontally’, and the scent of that 3% two-stroke exhaust. Until, on a visit to a friend (from the times of those early adventures), he said, A room-mate, who is 90 years old, left his Vespa with me, out in the sun and the elements. Why don’t you buy it? Where are the keys? I asked. Found, inserted, and unlocked, with the handlebar straight, battery flat (obviously after 2 years sitting), I opened the seat. It had petrol in it, so I pulled the choke on the PX, first kick, and it started!! And so, that ‘dormant’ passion also sparked: an explosion - there was my first love! She was beautiful, but dirty and partly rusted. The 150 PX engine sputtered, but with the regularity of a Swiss watch. I had forgotten the sound, the music of a two-stroke. I took it to a distant cousin who had a Vespa dealership to have it ‘sorted’. A month later I went to collect it, shining like new, and a few days later, I left Sicily headed to Piedmont (where I live with my family), destination Turin astride my Vespa, by sea from Palermo to Naples and then on the road from Naples to Turin, covering 910 km (in 2 days). It was a long trip, considering the combination of a partially worn out seat and my weight. It was 2010 and I continued using the Vespa for a few years in the summer, but unaware of Vespa Clubs, rallies, time-trial competitions, etc. - worlds that I now know and frequent. 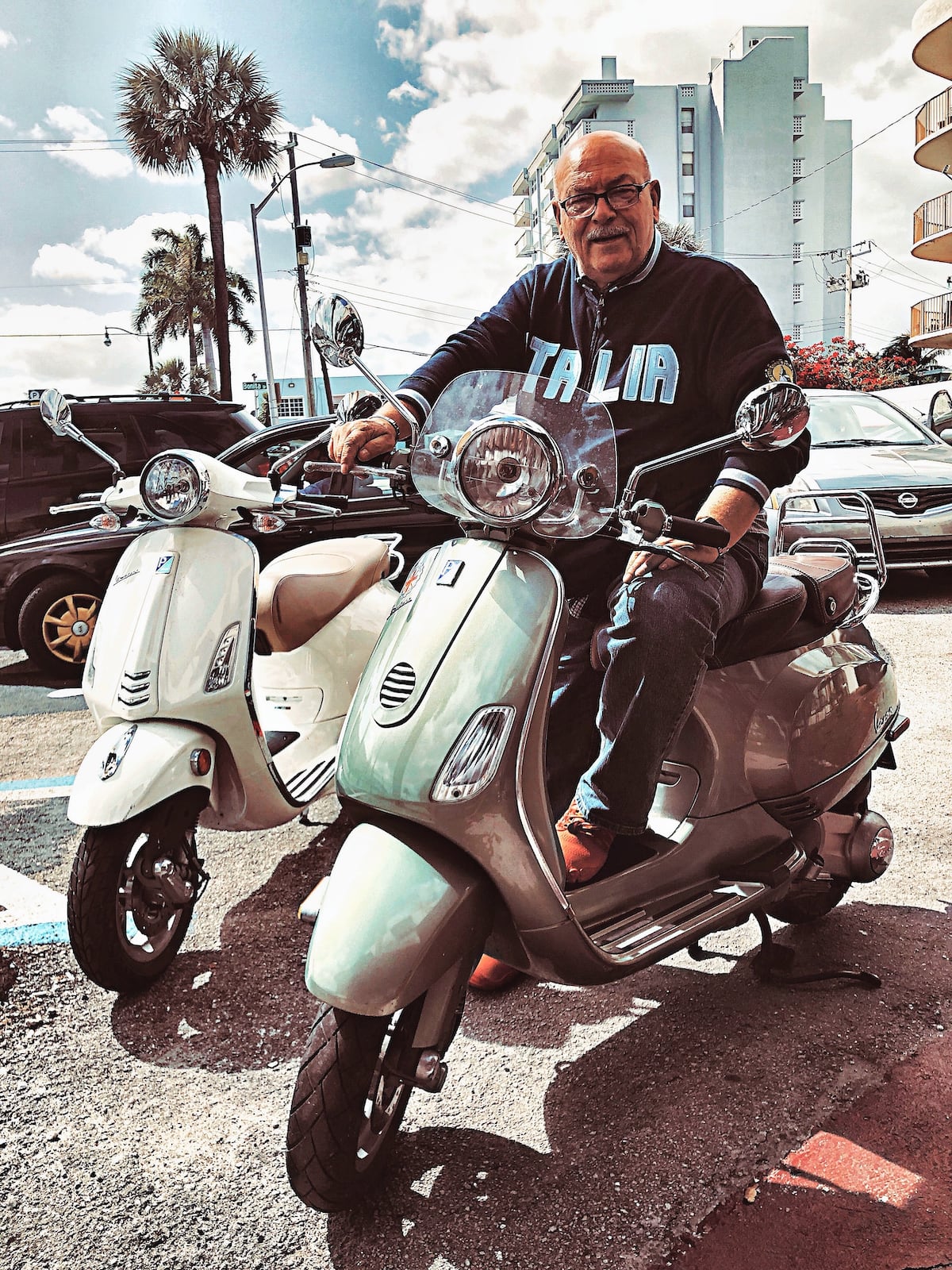 I’ll never forget my recent ‘American experience’ in 2019 when, transferred to Florida for work, my first motorised purchase was a 2010 Vespa 150 XLV ie in Portofino green which I called ‘MiAmi’ (‘I love you’ in Italian) and used for four months and 2,800 km. All I have left of her are some photos, the license plates and registration. On 14 March I had to catch the last flight to return to Europe (the Covid era had begun). 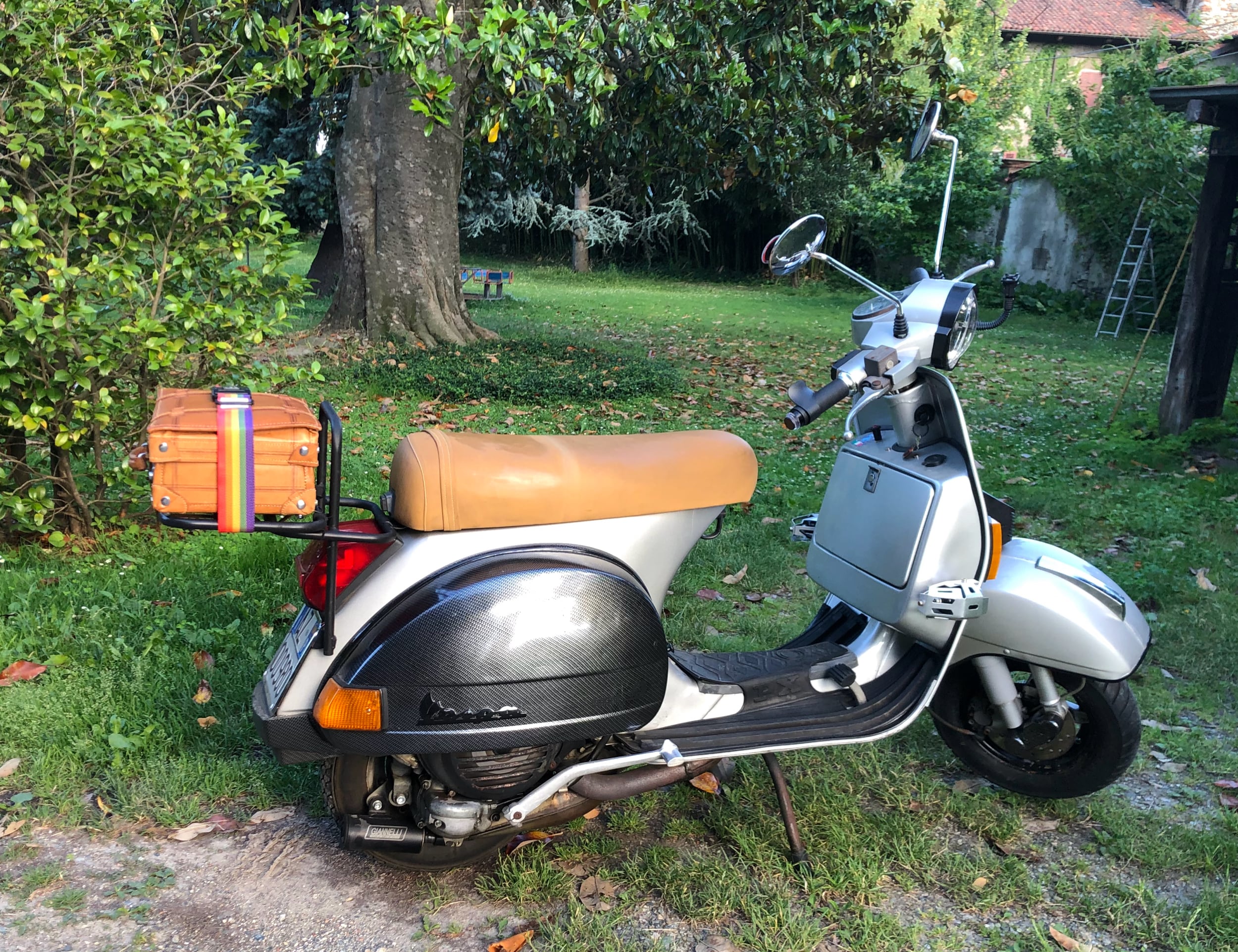 One day, when I'm very old, she (my Gigginè) will be in my garage or the entrance to my home, as a trophy of my memories, ready to be ridden by my grandchildren. In these years of frequenting the Vespa world, I have met many people, in Italy and abroad, who share the same spirit I have and I have learned many things from them, both about mechanics and the world of Rallies, Audax, and time-trial competitions. With her, my beloved Gigginè, we have gotten wet, been cold, been hot, we’ve gone slowly, we’ve gone fast, I’ve been afraid, I’ve fallen just a very few times (with her) and I’ve picked her up and we’ve gotten back on the road. Riding her, I’ve spoken a thousand times (in my mind) with myself, I've sung and shouted with joy like a madman... With her faithful operation, she has taken me to wonderful places, experiencing unforgettable things. I learned to communicate using gestures with other Vespa enthusiasts, always waving (as tradition dictates) to other motorcyclists and scooters along my way. My Gigginè is not a means of transportation or a piece of metal with wheels. She has burst into my soul. 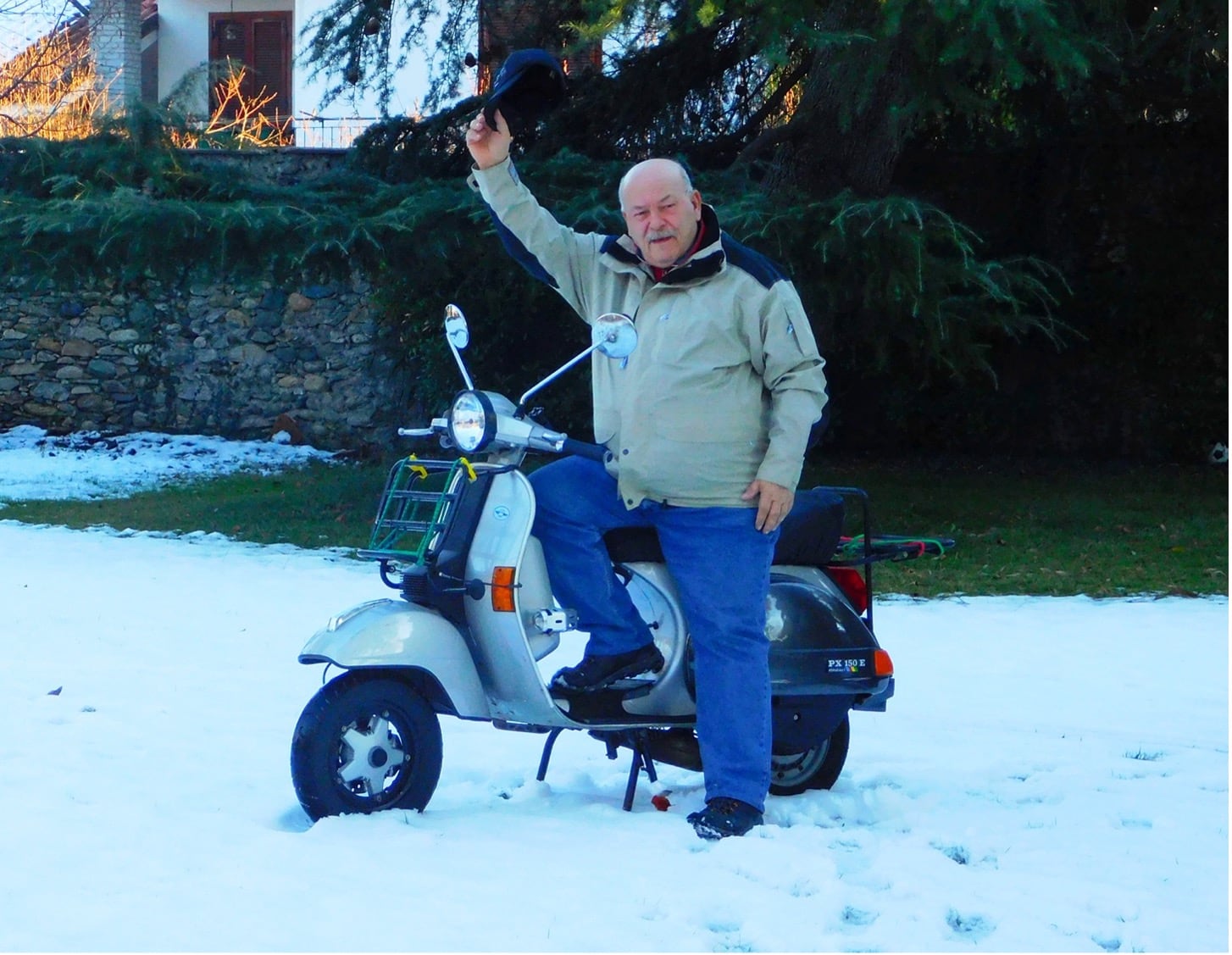 A greeting from Gino with his ‘Gigginè’ to all Vespisti around the world.

I will always be aware that I am riding a piece of history - simple and inventive technology born in Italy of courageous and enterprising men - and that it is appreciated all over the world, thanks to the ingenuity of Engineer Corradino D’Ascanio and the resourcefulness of Enrico Piaggio who began writing this page of history. And thanks again to everyone around the world who works for the VESPA brand to increasingly make it a unique and inimitable product.” For more than 75 years. 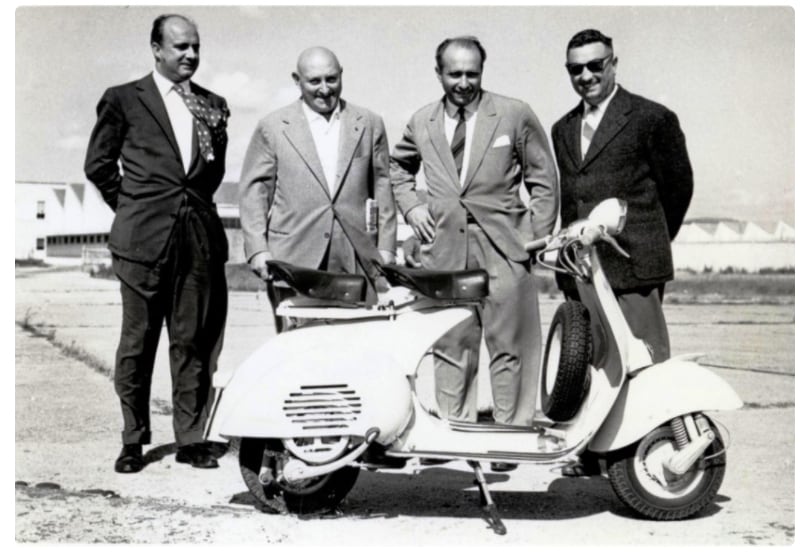 Engineer Corradino d’Ascanio, second from the left, ‘father’ of the first Vespa.