FROM AN IDEA OF GUZZISTA MATTEO BRUTTI

October 2021 –  The new song by singer/songwriter Ermanno Corti “Herman” dedicated to the Eagle brand’s one hundred years starts with the unmistakable sound of a Moto Guzzi. It’s entitled “Un cuore a forma di V” (A V-Shaped Heart), as a tribute to the distinctive “V” engine mounted in the most famous Italian bikes in the world. The song is an anthem to the freedom of riding a Moto Guzzi, between nocturnal rides with the cylinders screaming, passion for the bike forged in Mandello del Lario, “hypnotised by your legendary sound” – as Herman sings - and by a V-shaped heart/engine.

* Wide offers to the readers the English translation of the text of the song, that is available at the bottom of the article.

An “energetic” song that makes the listener want to jump in the saddle and take off, dedicated to all Eagle brand bikers and the “first” one hundred years of the renowned Larian brand.

Celebrated in an extremely broad range of artistic forms, Moto Guzzi now has its own song, also born on the Larian banks. The origin of the song is a nice story recounted here by the producer, Matteo Brutti, Guzzista and native of Lecco, who rides a beautiful Moto Guzzi California 1100. Here it is in the photo taken in front of the legendary red gate of the Moto Guzzi plant at via Parodi in Mandello del Lario. And, the producer reveals, the ad hoc “sampled” sound that opens Herman’s song was made by its engine. 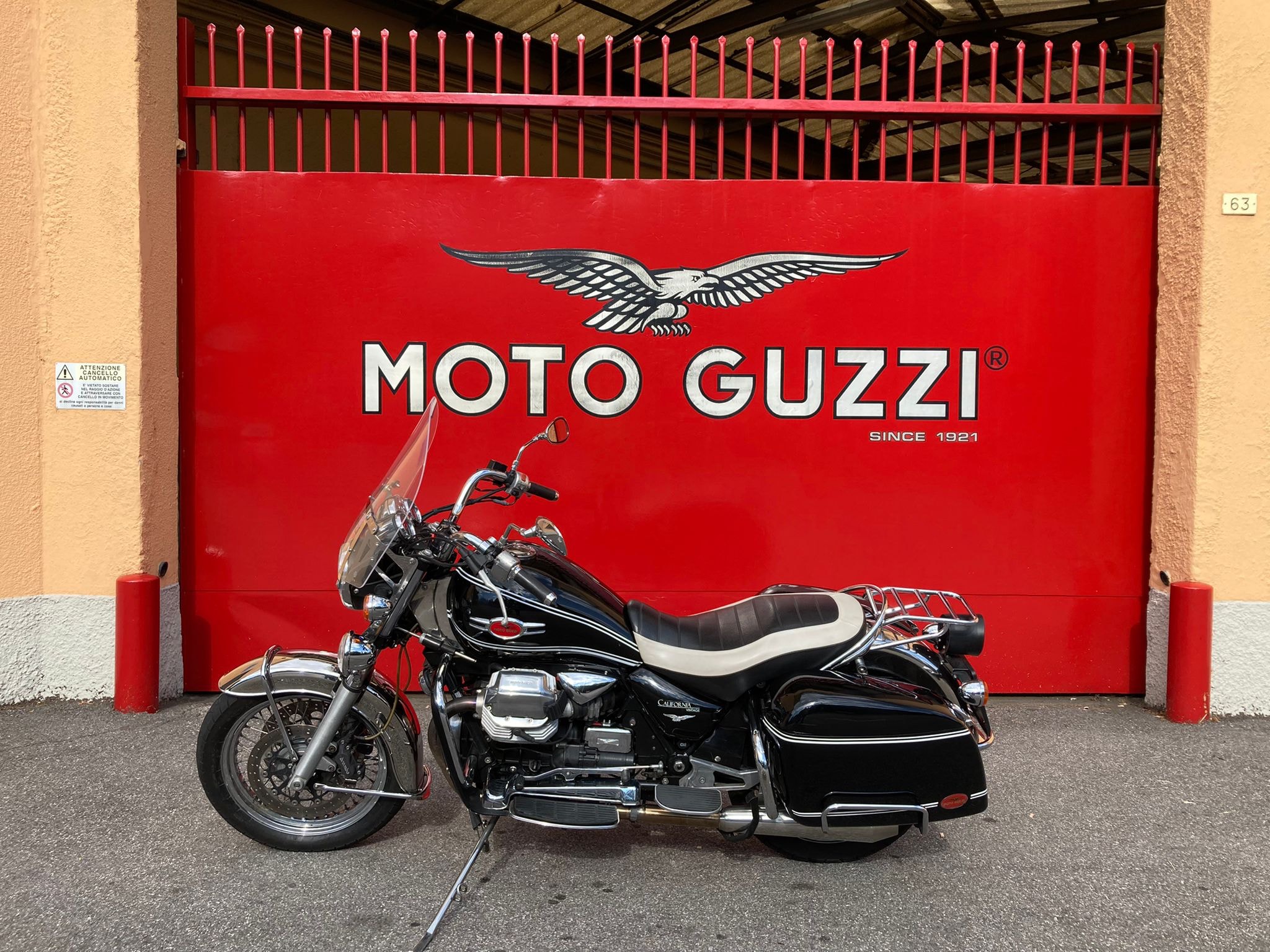 Matteo Brutti recounts, “It is with great pleasure that we announce the release of the new ‘single’ by Lecco native singer/songwriter Ermanno Corti entitled Un cuore a forma di V” (Independent Label Ciao!). Bikes and music have always gone hand in hand. ‘Our’ artist, Herman, decided to dedicate his latest single to the creators of the Eagle. In fact, the song celebrates the first century of the Mandello MOTO GUZZI industry’s history. From the first notes, the music projects you into the saddle of the iconic ‘Eagle’, a Larian bike. A journey, daydreaming, transported to these locations between lake and mountains, where the creative minds of the founders, Giorgio Parodi and Carlo Guzzi, first ‘dreamed of’ and then ‘forged’ it, as the song itself mentions.” 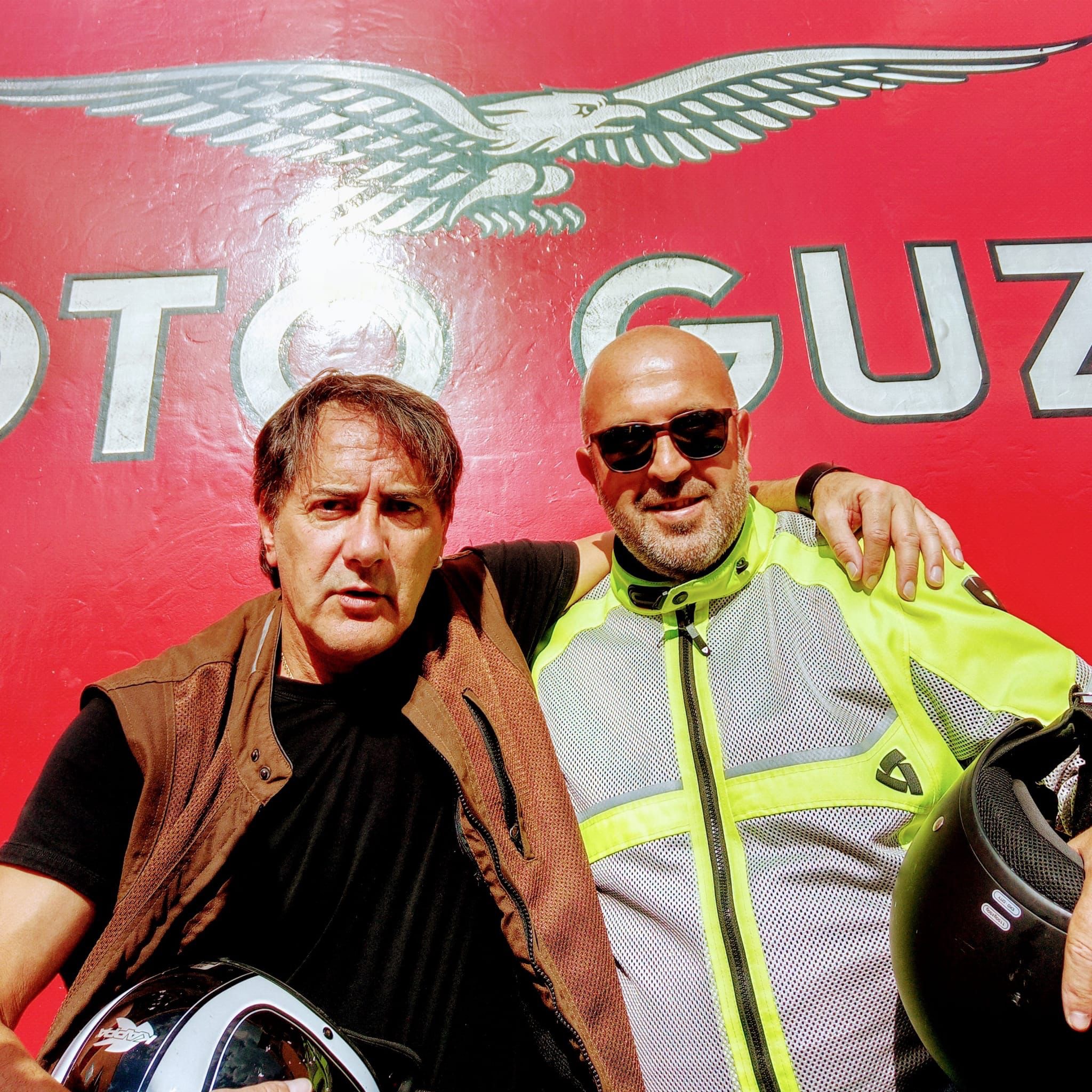 From the left, singer/songwriter Ermanno Corti and producer Matteo Brutti, 100% Lecco native, in front of the Moto Guzzi plant in Mandello del Lario.
In the photo below, both posing with Matteo’s spectacular California.

The song was conceived and produced by Matteo Brutti, a businessman from Lecco and a motorcycling enthusiast, who encouraged his singer/songwriter friend, Ermanno Corti, to compose this new song. “For quite some time,” Matteo confesses, “I had wanted to do something special for Moto Guzzi’s centennial and, talking with Herman, the idea of the song was born, which is also meant to bring out and convey the riding sensations of a rider astride an Eagle. When we listen to the song, the unmistakable sound of the Guzzi engine warms our hearts and the notes proceed with a mixture of psychedelic rock, typical of the ‘70s and ‘80s era sound, where Ermanno pours out all his usual energy and composing sensitivity.”

Matteo continues,  Listening to Un cuore a forma di V, you can feel the singer/songwriter’s bond with that land wet by ‘…that branch of Lake Como…’ And it is an exclusively local production and creation, done by our Independent Label Ciao! Participating in recording the song were bass player, Maurizio Rocca, Daniele Scicchitano on the drums, and solo guitar player, Marco Gnecchi. The recording was done at Aron Corti’s ‘Streetrecstudio’ with mixing done by Mauro ‘DRAGO’ Bertagna.” 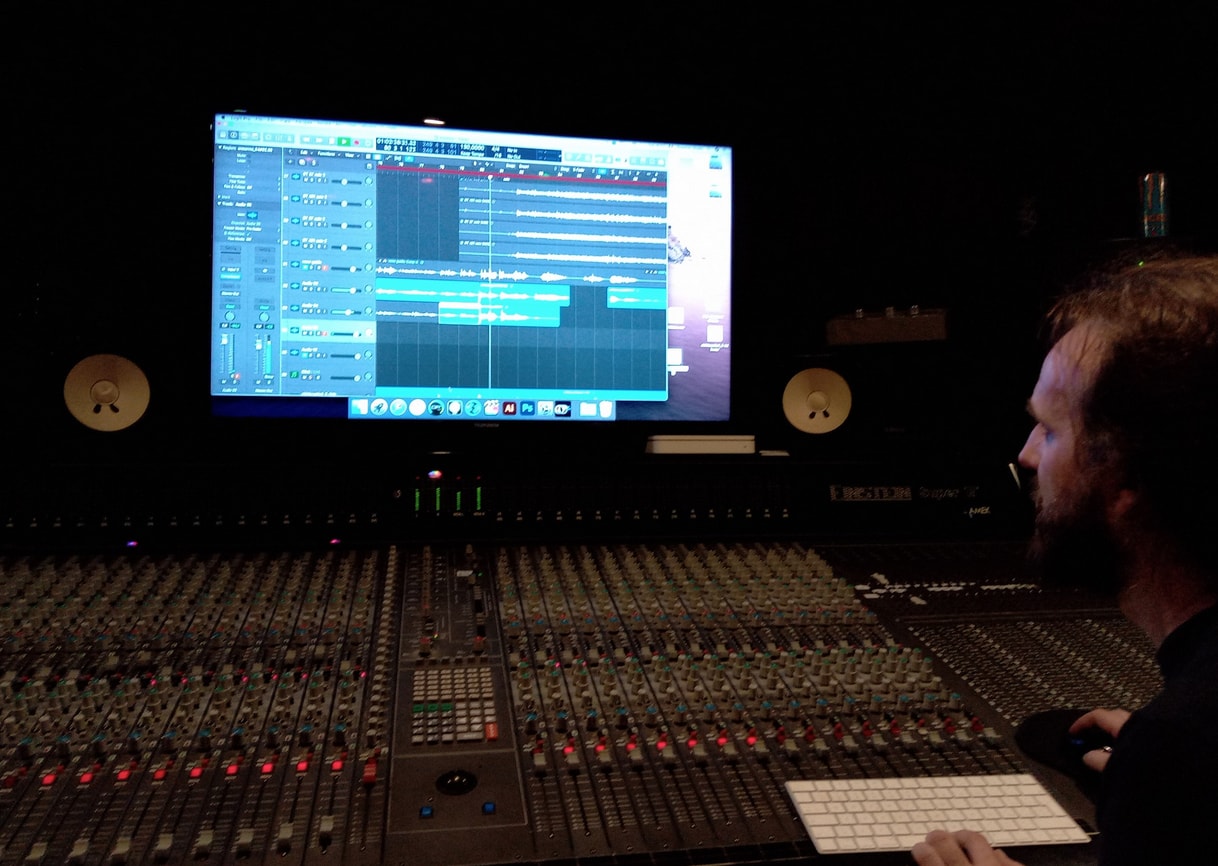 And he concludes by revealing that they are already thinking about doing an English version of the song as a tribute to the worldwide heritage of the brand from Mandello. So, the song will be able to fly even higher.