FEDERICO SBARDOLINI: “THAT TIME I WON A MOTO GUZZI CALIFORNIA STONE” THE STORY OF A PHOTOGRAPH WITH A MOTORCYCLE RIDER AND TURKEYS... 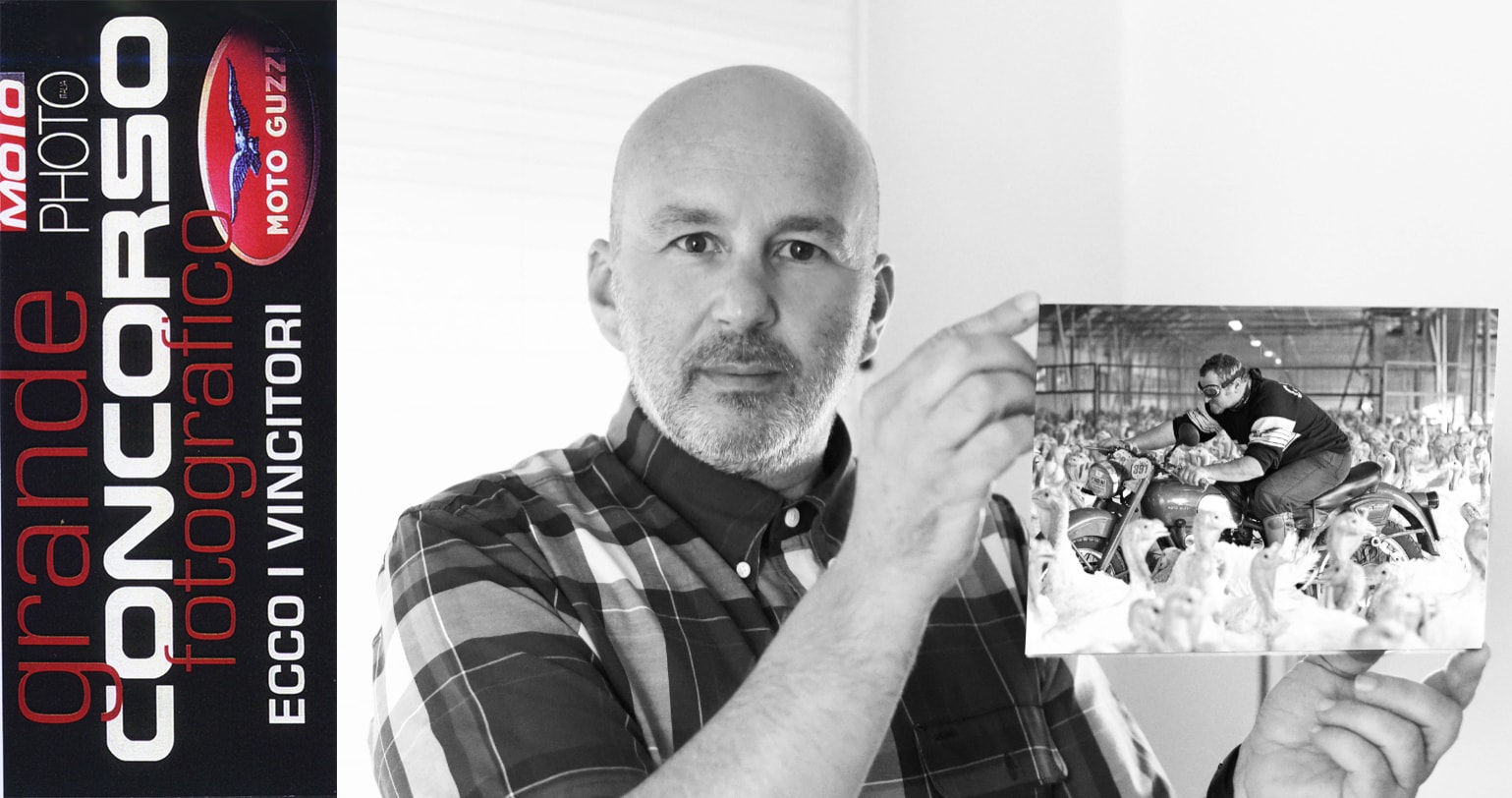 June 2021 – The Moto Guzzi Centennial (1921-2021) brings out fascinating stories, as well as curious and interesting characters. This is the case with Federico Sbardolini, an Italian photographer for generations who reached into his memory and pulled out an event that dates back twenty years, of which he was protagonist. Federico wrote to us with the idea of bringing back “the famous Moto Guzzi Photo Contest, which was a resounding success for the Eagle brand’s 80th birthday, in 2001. I was the winner of that contest…” Thank you, Federico, for the idea, but in the meantime, we want to know everything about that “famous” contest, the winning photo and the photographer who took it. So, here is the interview.
Who is Federico Sbardolini?
“Born in 1967, a native of Iseo (Lago d’Iseo/Iseo Lake-Brescia). I was born into a family of photographers and retouchers. After high school, and for more than 30 years now, I have been a professional photographer. The family studio, which has been in operation for 3 generations, is in Iseo on the lakefront at No. 16. My grandfather started the business in Iseo in 1927. Grandpa a photographer and gran came from a family of retouchers.”

HERE IS AN ARTICLE (2017) FROM CHIARI WEEK - ISEO EDITION
ON THE 90 YEARS OF THE SBARDOLINI PHOTO STUDIO. 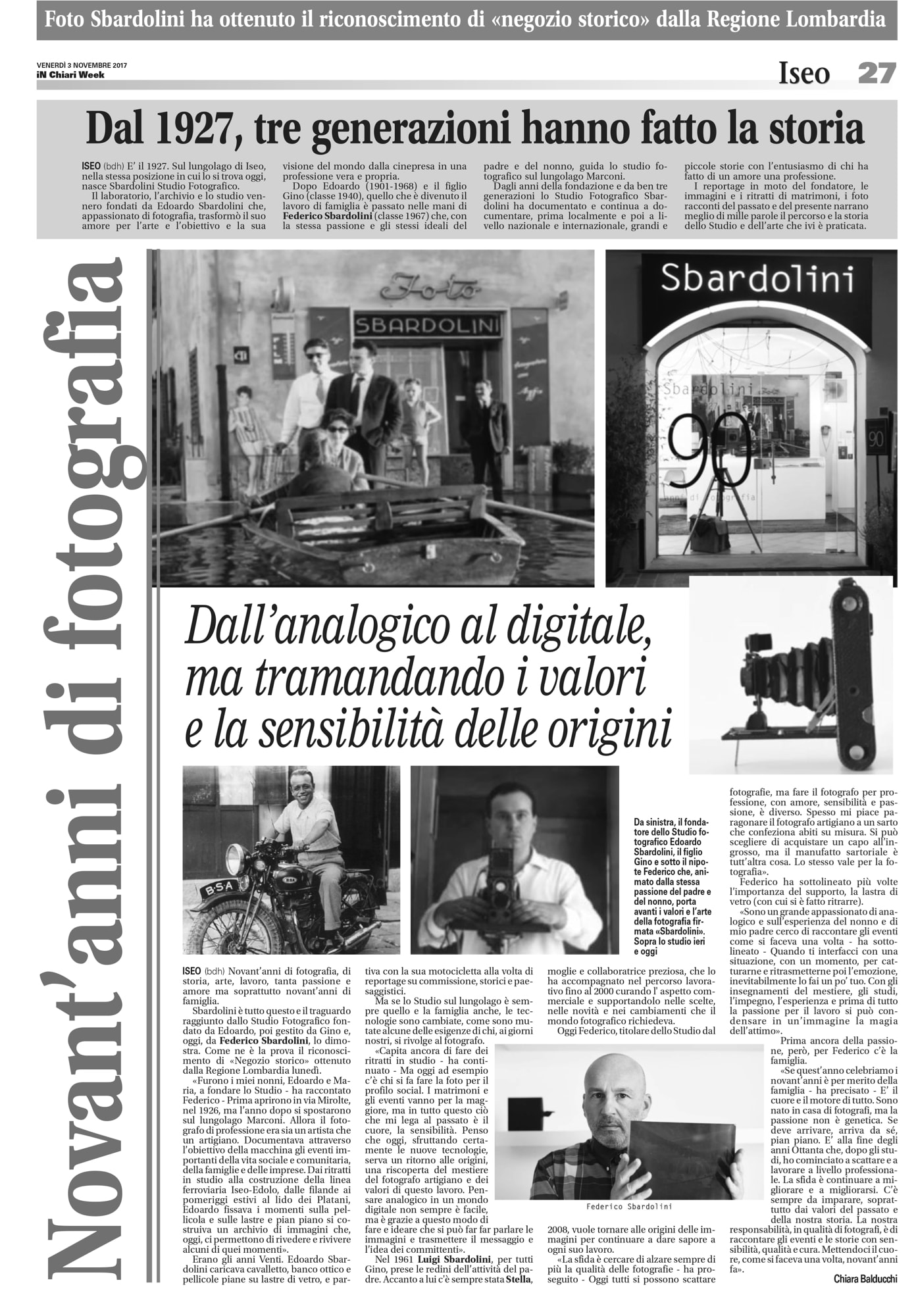 Short summary of the article - Sbardolini photographic studio active since 1927: over 90 years of photography, three generations, from analogue to digital, handing down the values of the origins. It is recognized by the Lombardy Region among the historical shops. It is on the lakeside of Iseo, in the province of Brescia (Lombardy region, North of Italy).

Tell us about that photo contest launched by Moto Guzzi 20 years ago: how did you come up with the idea for the photo that ended up winning and who is the person depicted in the photograph? 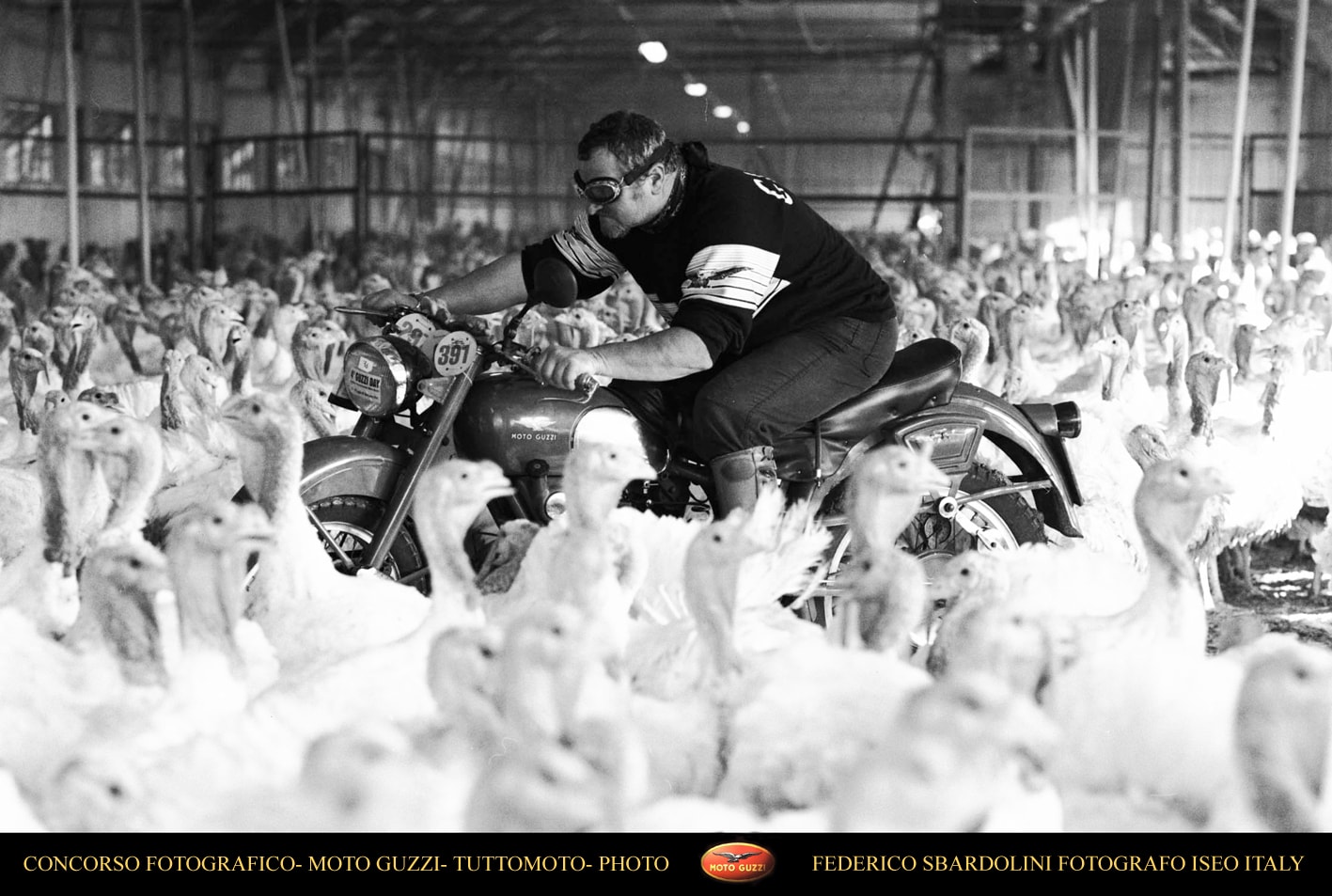 The winning photo of the 2001 Moto Guzzi contest:
Guzzi fan Gianni Pollonini on a Moto Guzzi Falcone with... turkeys.
By: Federico Sbardolini.

“My participation in the contest happened by chance, flipping through a Photo Italia trade magazine, so I decided to participate. I liked the ‘Guzzi People’ theme. 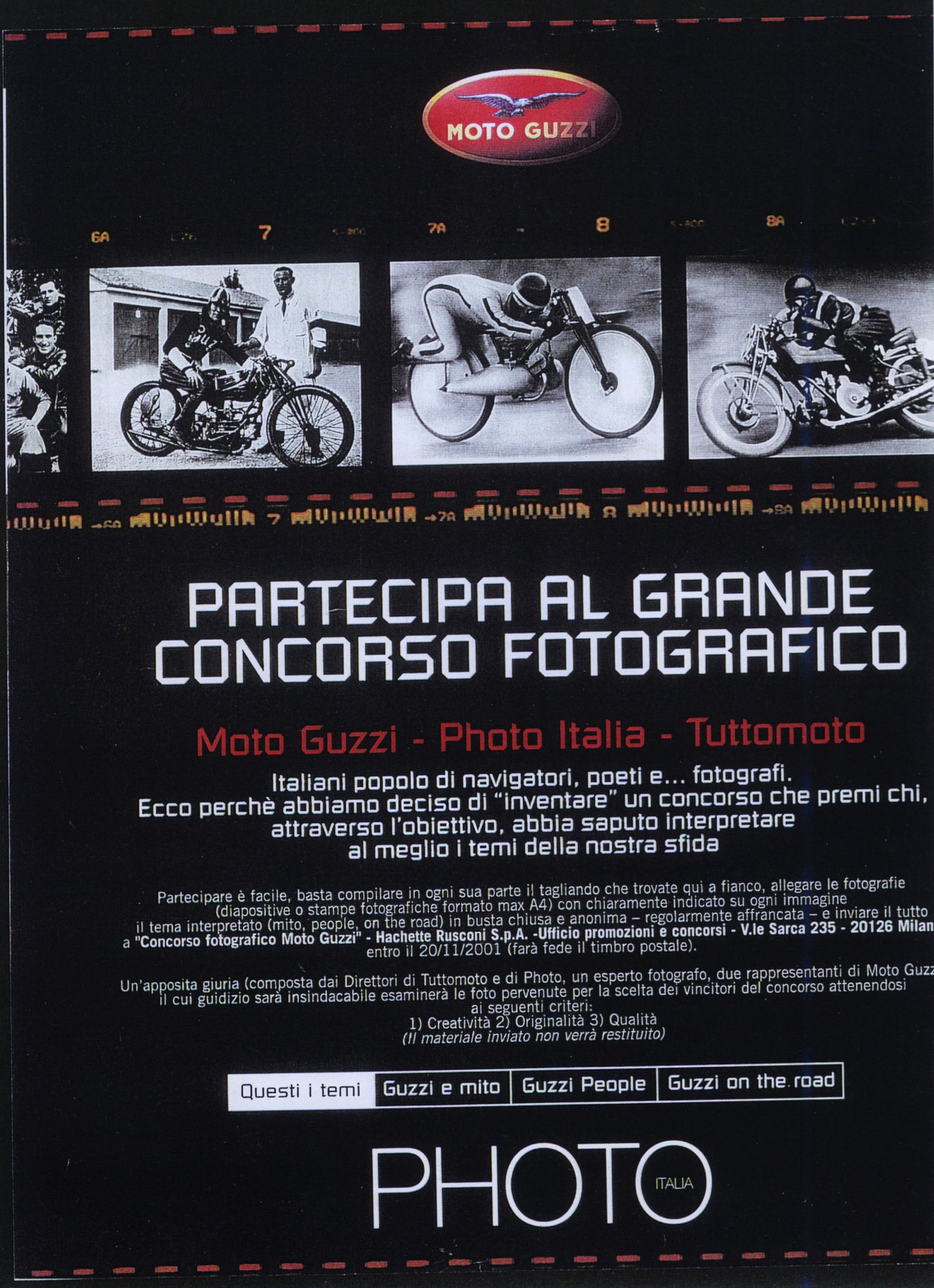 Short summary - the poster of the photo contest for the 80th anniversary of Moto Guzzi (2001): "take part in the great photo contest"; Italians, people of navigators, poets and ... photographers; the themes of the challenge: Guzzi and myth; Guzzi People; Guzzi on the road.

That is the Guzzista spirit: freedom, a passion for engines and meeting special people. The page that promoted the contest connected me immediately with the person-character depicted in the photograph: Gianni Pollonini, born in 1941, passionate Guzzista and an intrepid individual.
In his workshop, takes and anecdotes are told about his participation in Moto Guzzi rallies all over Europe. In the photo that I took, Gianni is astride a red Falcone sport. Taking the Falcone to the turkey farm of Bruno, a friend and also a Guzzista, came naturally: great visual impact and a bit of a surreal location.”

Great photo contest, here are the winners. the passion for motorcycles and that for photography, put together, gave life to these evocative images; first prize a Moto Guzzi California Stone won by Federico Sbardolini from Iseo (Brescia).

Did you participate in the contest to gain notoriety as a photographer or because you are a Moto Guzzi fan and you wanted the grand prize, namely a MG California?
“The photo contest was actually a broader and more articulated project - a combination of factors let to me taking that final shot. The project was set up in multiple shots, with the protagonist being the man and his bike. Here is the sequence of shots.

The photo was done on 6x6 medium format film with a Hasselblad camera. I was born and raised with analogue photography and this is still my favourite camera.”
How did delivery of the prize go - that is, the motorcycle?
“An official letter from Moto Guzzi notified me that I had won the California Stone. I picked up the prize at the Brescia Moto Guzzi dealership.” 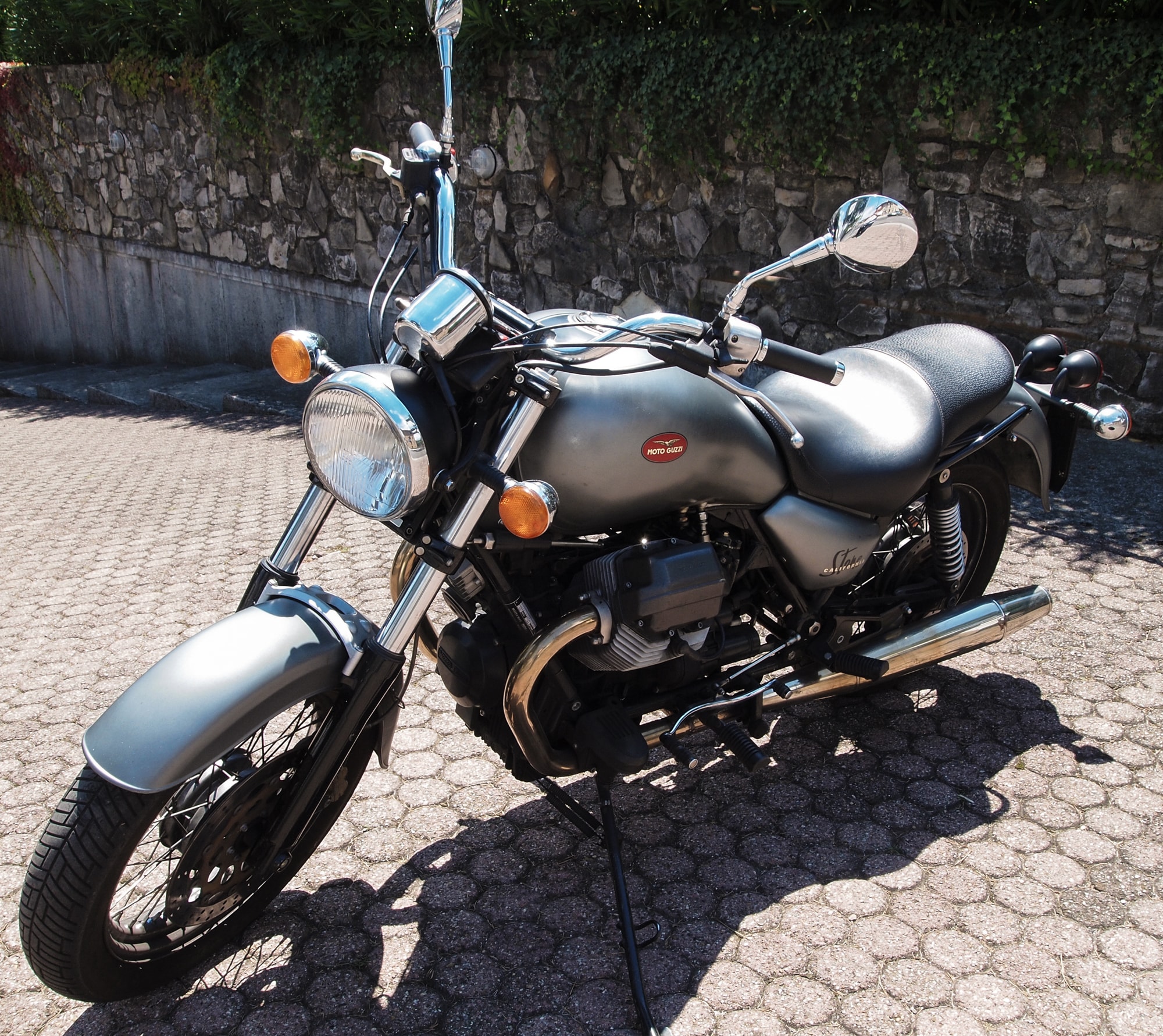 Over the years, what became of that spectacular bike that you won? Are you a biker?
“Up to that time, I had never had any experience with bikes this big, but I became an enthusiast and began having fun straight away. The musicality of the Moto Guzzi engine captured my heart. I had a lot of good times and participated in various editions of the GMG-Giornate Mondiali Guzzi (Guzzi World Days) in Mandello del Lario. On those occasions, I thoroughly enjoyed myself with photo shoots of the bikes. Then, a few years ago, (due to not having enough time to dedicate and I not wanting to see it parked in the garage, unused) I passed the bike on to a family of Guzzisti and it is in excellent hands!”
Besides the contest mentioned and the photo shoots at the GMG events, over the course of your career, have you had the opportunity to shoot other Moto Guzzi bikes?
“My photo project then participated in another contest as well, called ‘La moto del tempo’ (The bike of the time) organised by Moto Guzzi Club Roma, and it was selected as the best photographic project and displayed in the police museum in Rome. In this case, the awards ceremony was held right there in the museum in Rome.”
We wish to thank Federico who also revealed that he has jealously saved all the documentation of the Moto Guzzi-Tuttomoto-Photo Italia contest, including the envelope (image below) with the official letter from the Mandello del Lario manufacturer notifying him of his first prize. 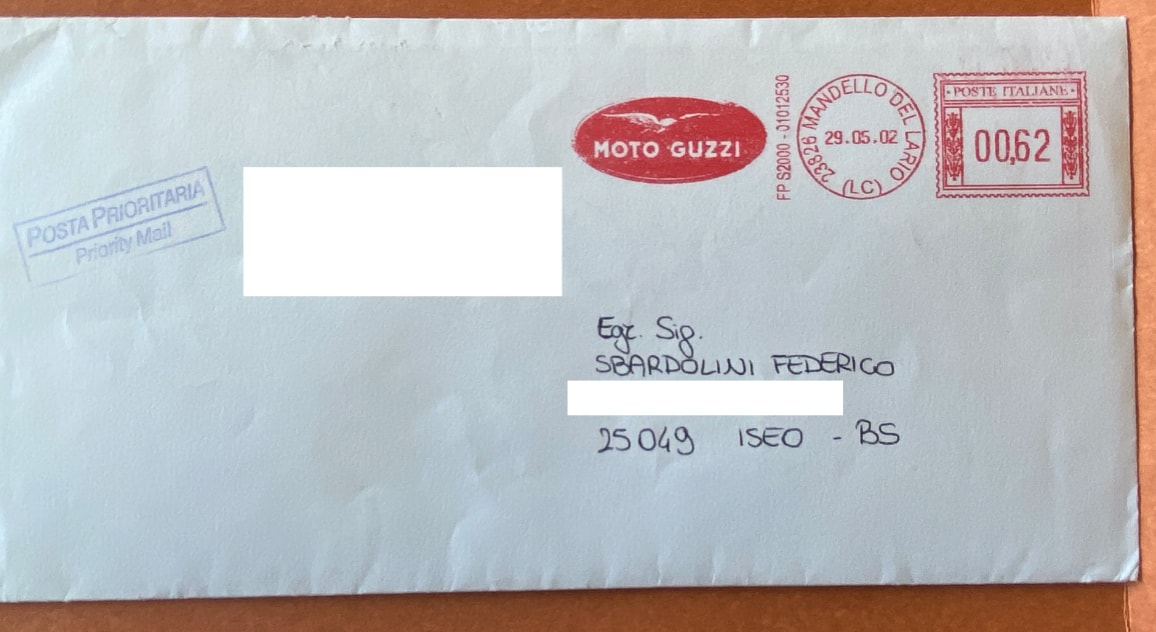 A great story, to be passed on to future generations of Sbardolini photographers... and Guzzisti!

In the RH background of this article: photo of Federico Sbardolini which is part of his ‘Guzzi People’ themed photo project; in the LH background: Moto Guzzi Falcone 500, co-starring model of his winning photograph. 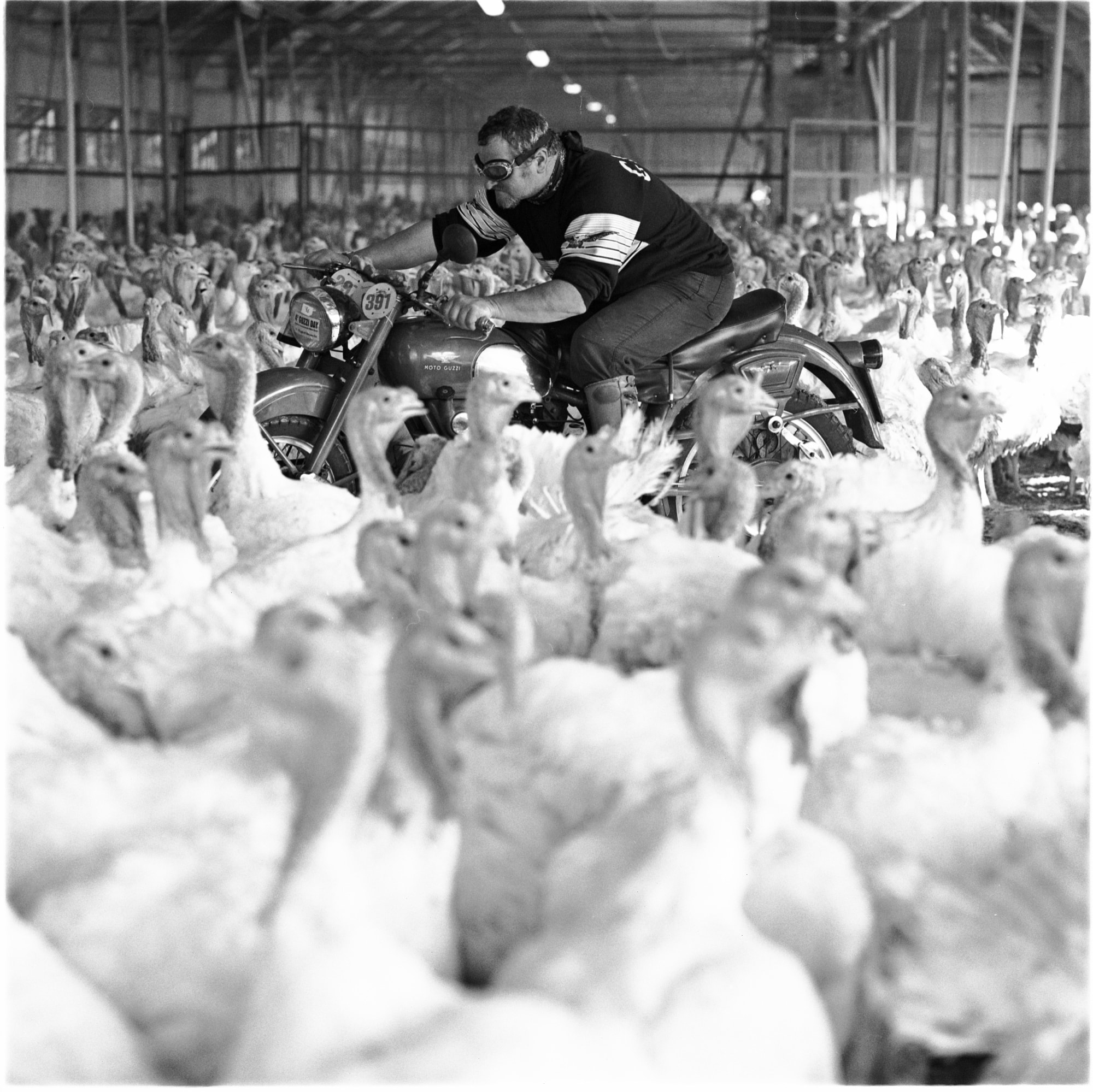