INTERVIEW WITH ROBERTO LEARDI, PRESIDENT OF VESPA CLUB D’ITALIA (VESPA CLUB OF ITALY). FOR 38 YEARS AT THE HELM OF A VITAL AND GROWING ORGANISATION, WHICH INCLUDES 600 CLUBS AND 77 THOUSAND MEMBERS 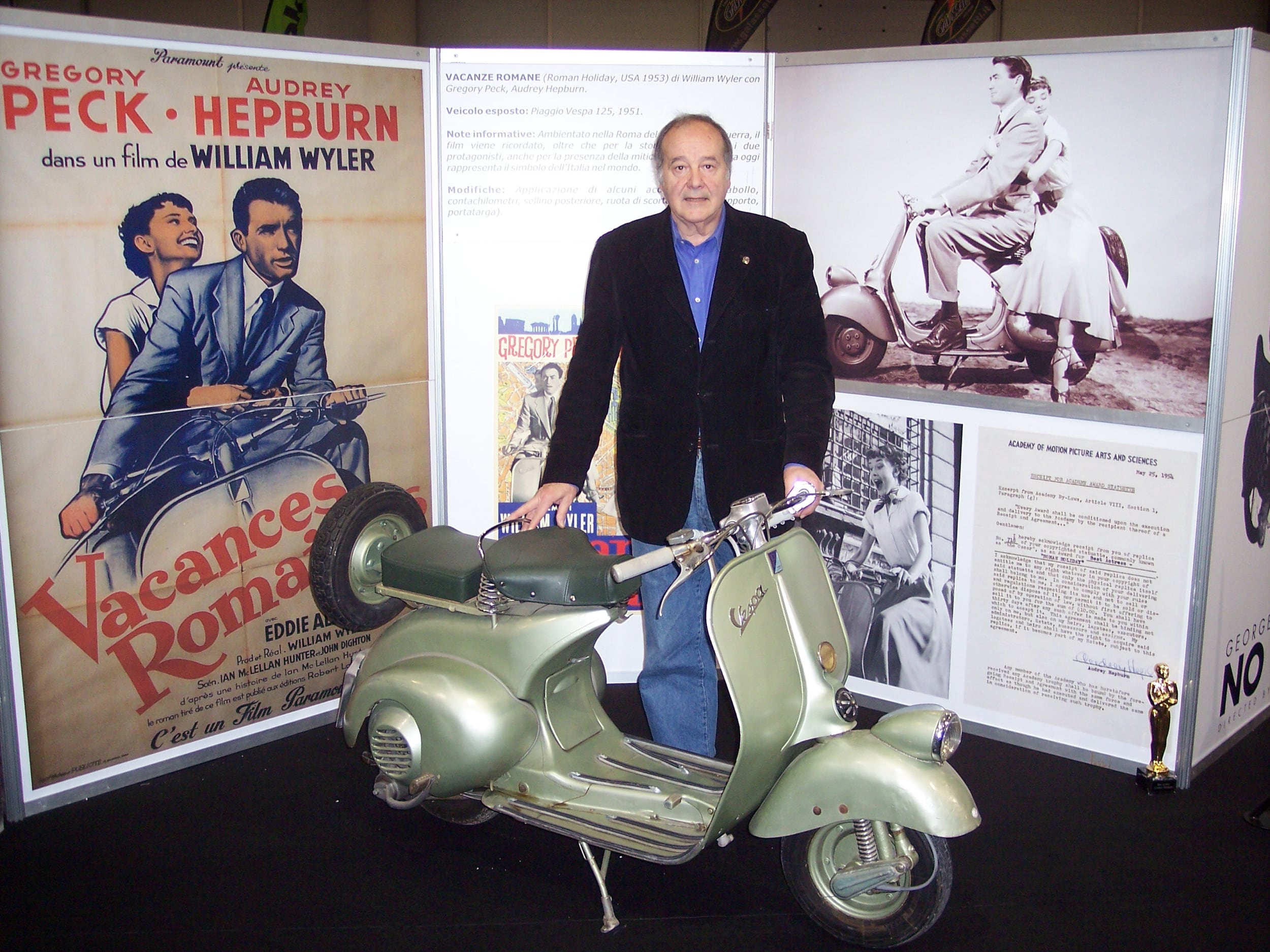 Roberto Leardi in 2003, on the occasion of an exhibit for the fifty-year anniversary of the film Roman Holiday.

For me, like for all other Vespisti, what Vespa has meant over all these years is that invisible spirit it possesses and transmits to those who use it, managing to bring hundreds of thousands of people from every corner of the Earth together around an ideal.
ROBERTO LEARDI.

March 2022 – The new 2022 national Vespa season (after two difficult years due to the pandemic) promises to be a great relaunch, packed full of events: almost 300, including touring rallies (regional, national and international) and sporting events (Italian and speciality championships, historic re-enactments), with the European Vespa Days 2022 trip, scheduled to be held from 30 June through 3 July in Guimarães, Portugal ( www.europeanvespadays2022.com/it). 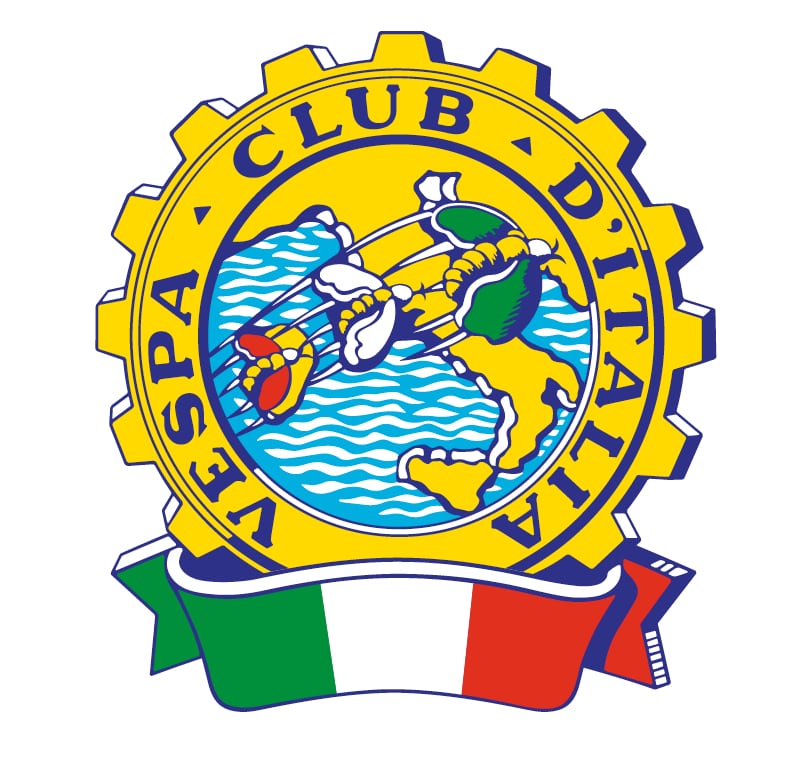 And, on the eve of the great relaunch astride Vespa to regain our freedom and opportunities of meeting and friendship, Wide just had to interview the main point of contact for Italian (and non-Italian) Vespisti, namely Roberto Leardi, President of Vespa Club d’Italia, beginning with a brief biographical profile.
WHO IS ROBERTO LEARDI? Roberto Leardi, born in 1943, has been at the helm of Vespa Club d’Italia since 1984. He became a Vespista following the lead of his older brother, Pierluigi, with whom he joined (before he was even 18 years old) Vespa Club Roma. 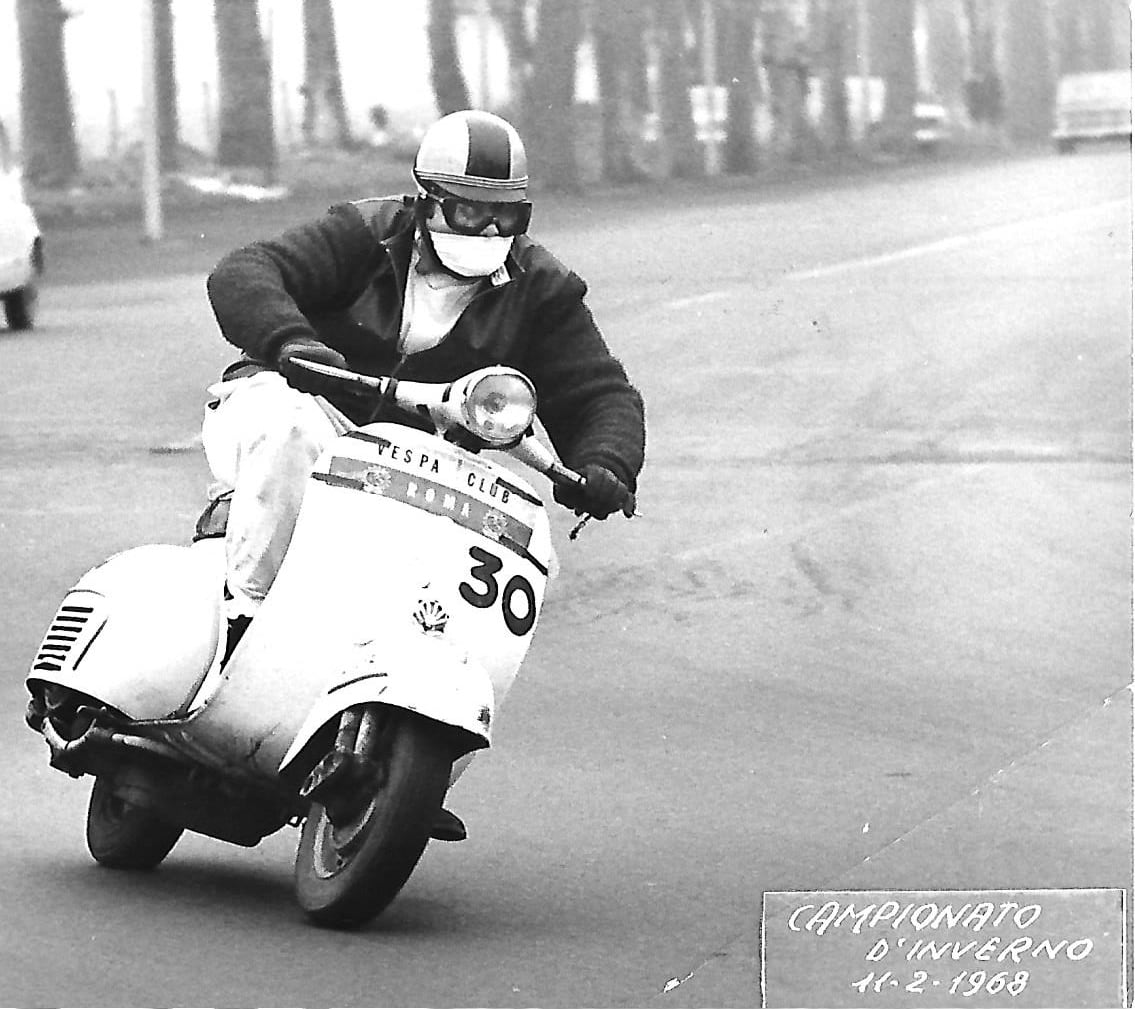 Roberto Leardi in 1968, astride his GS 160 in a regularity competition in Roma.

A highly skilled Regularity rider, a speciality where he took home a few wins and the regional team title in 1968, Roberto became President of the chapter organisation in 1981, joining the Managing Board of Vespa Club d’Italia in 1977, overseeing the press and foreign relations sector. A sportsman, but also a traveller par excellence, touring the continents. In fact, he has participated in almost every edition of Eurovespa and Vespa World Days, beginning from the 1960 edition. His first Vespa was a 125 and then he moved on to the GS (still his favourite), and his personal collection is full of historic and modern models.

Cover and inside cover of the No. 4-2021 issue of the Vespa Club d’Italia bimonthly magazine. The magazine was founded 70 years ago. Roberto Leardi is its editor-in-chief.

He has written numerous Vespa-themed books, ranging from technical texts (he co-authored the Vespa Tecnica series, his latest endeavour was the volume on the Vespa 50) to others of a historical nature on the association of which he is the president. When the Vespa World Club was formed in 2006, he was called on to be the president, a position he left in 2012 to be named honorary president. He is also editor-in-chief of the Vespa Club d’Italia bimonthly information magazine (distributed free of charge to VCI members). 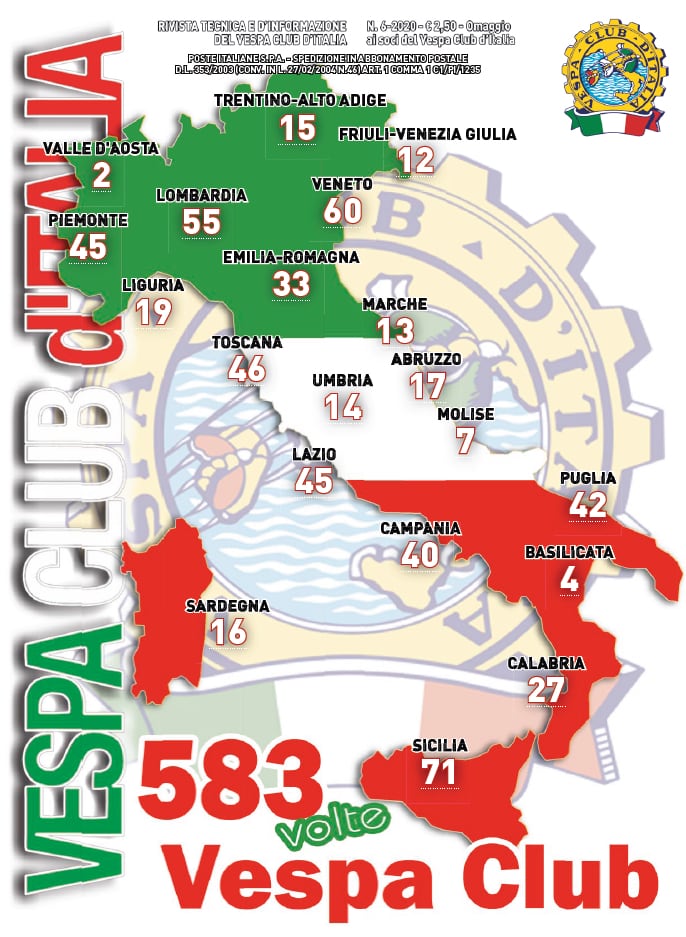 Cover of the Vespa Club d’Italia bimonthly magazine, No. 6-2020. Since then, the VCI has surpassed 600 clubs.

INTERVIEW WITH ROBERTO LEARDI.
(For his collaboration, we wish to thank Alessandro Lanzarini, the Vespa Club d’Italia magazine coordination and creation manager).

Mr. President, you are at the helm of the national Vespa Club which includes over 600 clubs in every Italian region, as well as 77 thousand members. An active and constantly growing association. But how has it changed over the years?
“Ours is a composite and transversal associational organisation: Vespa is a vehicle that makes no distinction in terms of gender, age, or social class because it has belonged to all generations for more than 75 years. The Vespa Club d’Italia includes the passion for Vespa of young and not-so-young people, from fourteen to… one hundred years old: our six hundred peripheral Clubs keep every day of this movement alive daily, thanks to the spontaneous and voluntary work of hundreds of people who organise touring, sporting, and cultural events. From the time I’ve been president, the number of affiliations has increased and the organisational numbers but, above all, the way of being has never changed, which tends toward bringing people together, solidarity, and a positive outlook for the future.”

LEFT: Roberto Leardi with a few Vespisti friends astride a Vespa "Faro basso". RIGHT: astride a Vespa PX, in a Vespa parade in Pontedera and arrival at the Piaggio Museum to celebrate the 70th anniversary of Vespa Club d’Italia.

What have the most significant moments of your presidency been over the years?
“There have truly been many important days over these forty years and it is difficult to choose just a few. If we want to mention a period, I remember the early eighties, when we successfully relaunched Eurovespa and the international relationships which then led to the Vespa World Days. In any case, each event has its own story, albeit containing identical values, which are the ones that have move ‘Vespism” for over seventy years. These have been four extremely rich and wonderful decades, during which we have developed in quantity and progressed in quality. Many people have done their part, offering up their free time for the overall growth of the movement, now and in the past, which confirms just what Vespa represents around the world. We mustn’t forget that Vespa Club d’Italia has had its own periodical since 1952, in magazine form for the last twenty-five years, which turns seventy this year and which has always carried out the task of informing Vespisti and keeping them connected.”

MEMORIES: ON 26 OCTOBER 2019, THE VESPA CLUB D’ITALIA CELEBRATED ITS “FIRST” 70 YEARS AT THE PIAGGIO MUSEUM IN PONTEDERA, WELCOMED BY THE PRESIDENT OF THE PIAGGIO FOUNDATION, RICCARDO COSTAGLIOLA.

In spite of the difficulties in recent years due to the pandemic, how did you celebrate Vespa’s 75 years in 2021?
“Unfortunately, it was not easy to organise activities over the last two years, but in spite of this, the spirit did not slumber. To the contrary, the events we were able to organise were extremely successful in terms of participation, thanks to the great internal ‘desire for Vespa’ our members have. In any case, we were able to run all of our sports championships and the historic-cultural events, both in 2020 and in 2021, in order to guarantee continuity over time and to demonstrate our vitality on all levels, in addition to a few touring rallies and we were also able to be present with our stands and several important trade fair events held both in Northern and Southern Italy.

An aspect that I feel strongly about highlighting is the organisation of Under 18 meetings, the most recent of which was in Sicily, dedicated to promoting Vespa among the youth and activities that can be undertaken with them. There was great participation on those days with both the young people and their families.” 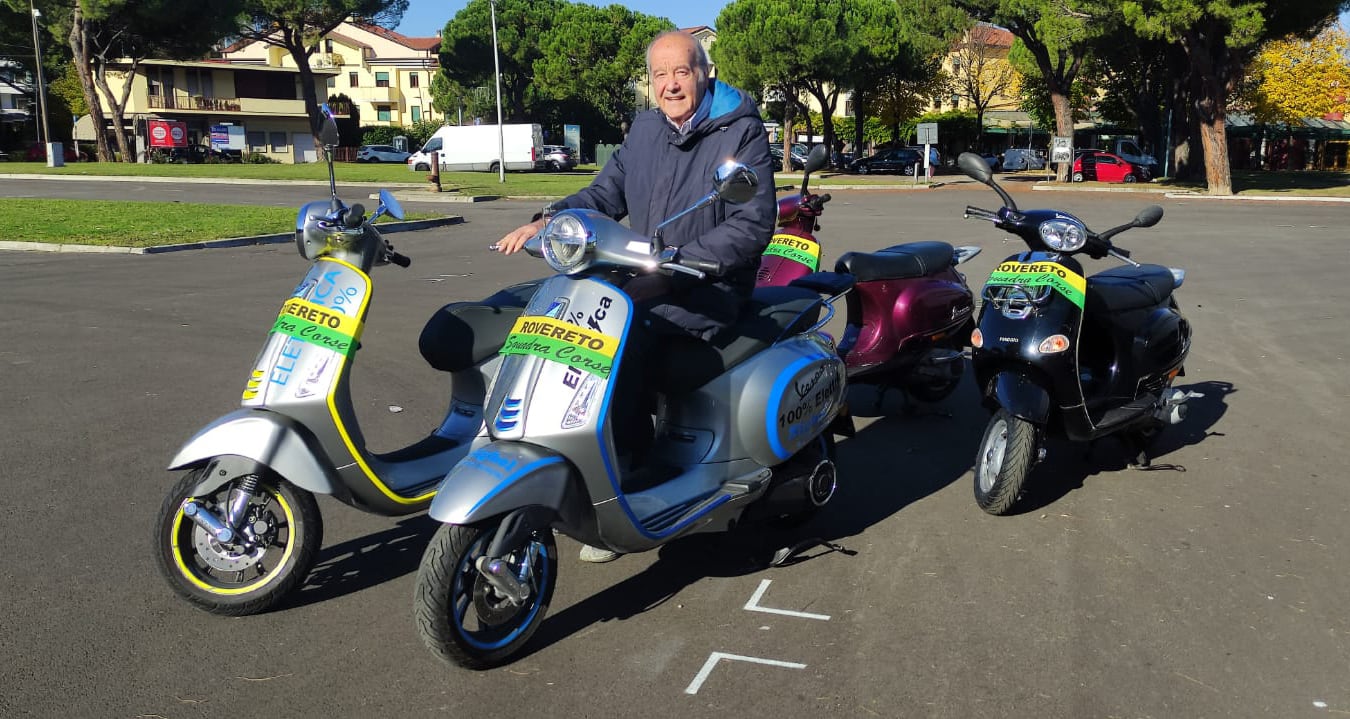 Roberto Leardi astride a Vespa Elettrica at the Italian Vespa Automatiche championship of Montegrotto Terme (Veneto region) in November 2021.

How are you preparing for the new Vespa season, with hundreds of touring events, rallies, and sporting events that your 2022 calendars offer all over Italy?
“As I already point out, our members do not like to sit on their hands. The global recovery and the signs of normalcy have generated in everyone the desire to pick up where we left off and the programme for the year that has just begin is extremely intense on all fronts, with a new effort especially on the plan of spreading the Vespa culture 360°. We’ll be tackling new and original themes with initiatives that demonstrate how Vespa is not just a means of transportation but a true symbol of the Italian society, capable of crossing through the ages remaining true to itself and aligned, without distorting itself, with technological progress. Our calendars include about three hundred events in all, national and international. These are numbers that show how Vespa Club d’Italia by now has roots everywhere across the territory and how we have consolidated relationships with Vespisti friends from other countries, as well as how enthusiastic our clubs are and how honed their organisational skills are. In short, every weekend will be under the Vespa and Vespismo sign, in every season of the year.” 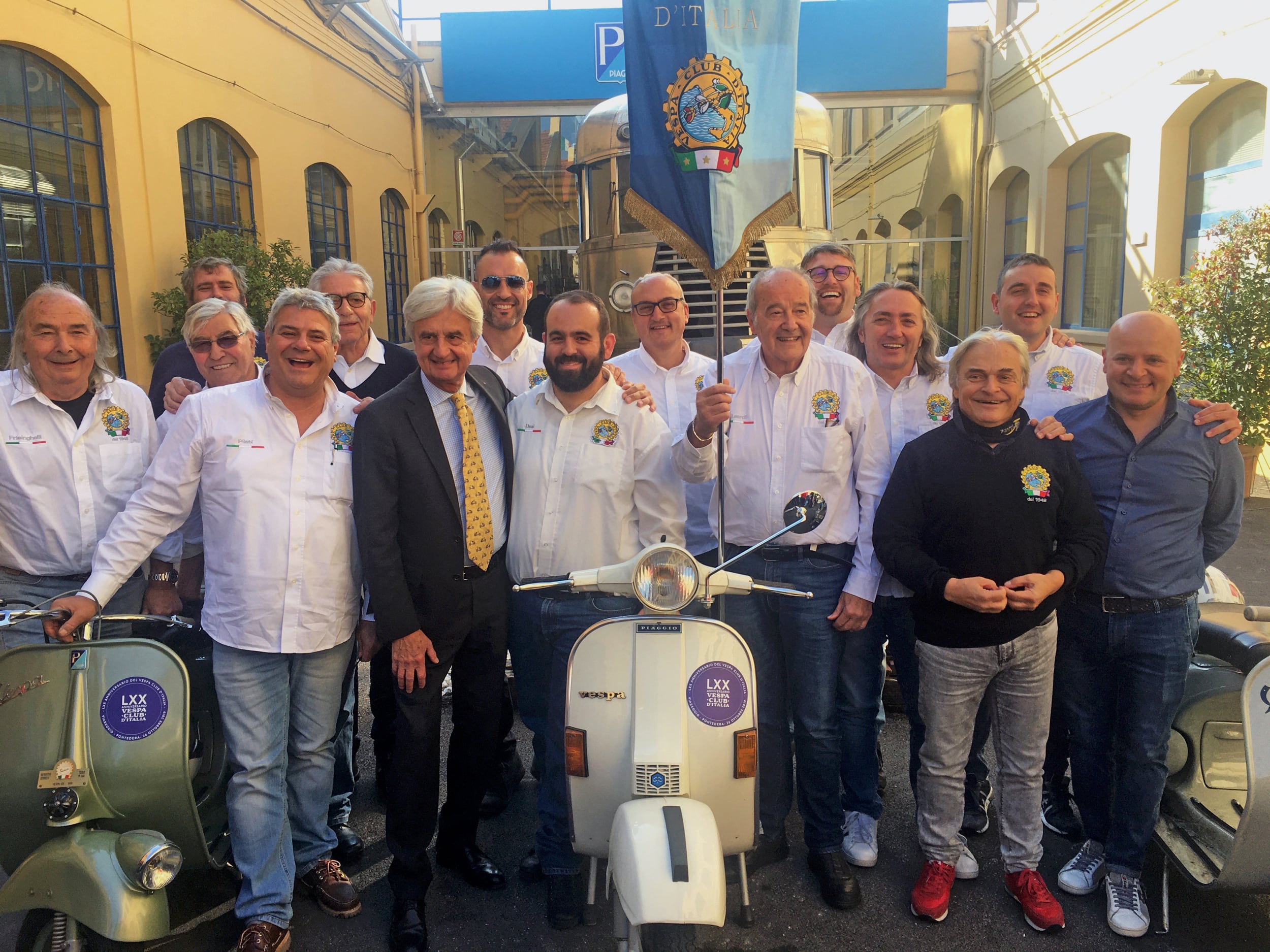 “LXX Vespa Club d’Italia” event at the Piaggio Museum, 2019. At the centre, with the standard, President Roberto Leardi, surrounded by the members of the VCI Administrative Board, with Riccardo Costagliola, President of the Piaggio Foundation. Unforgettable 70th anniversary event. 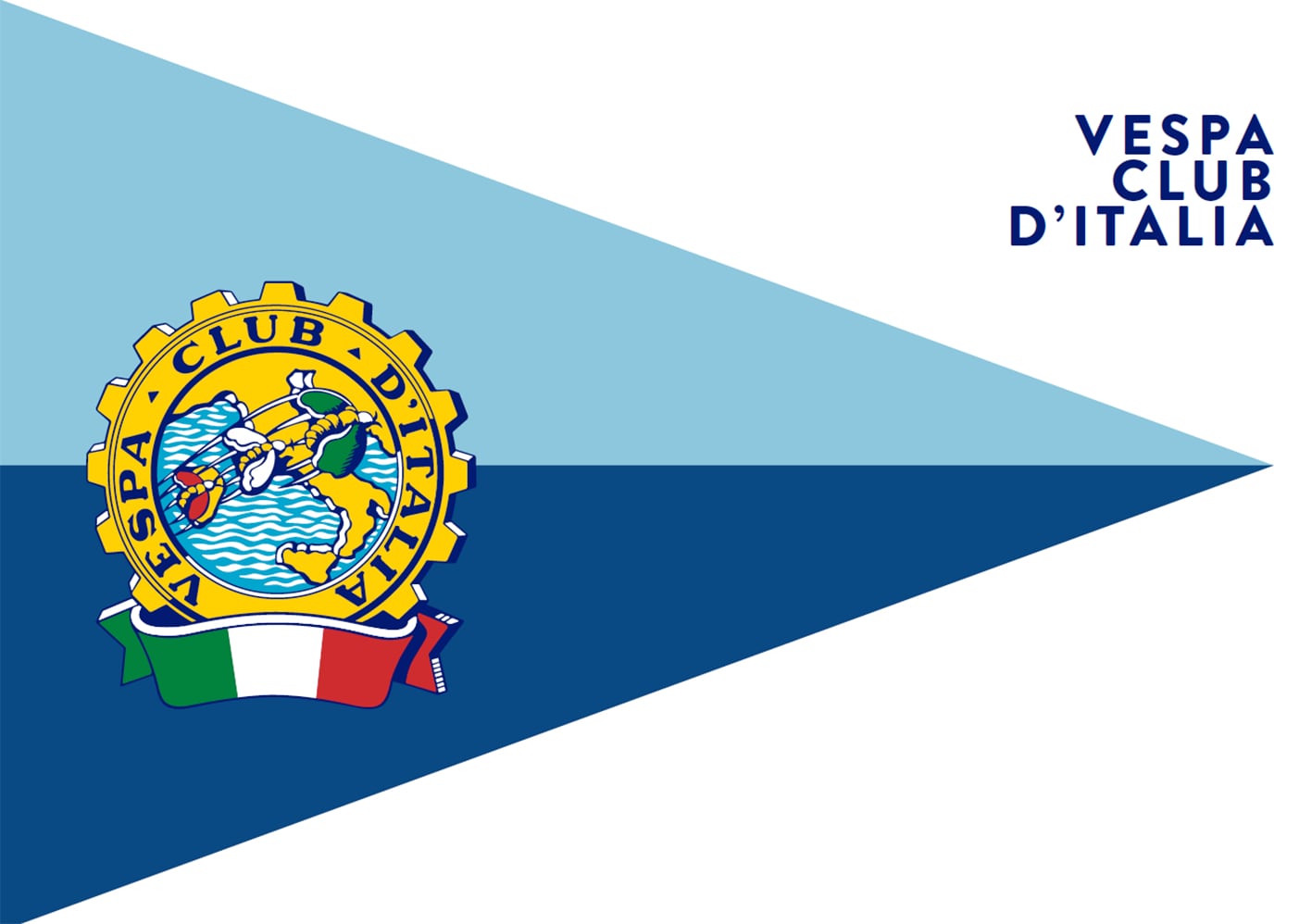