KLAUS NENNEWITZ, ENGINEER-JOURNALIST AT THE SWANK RALLY IN SARDINIA: 1,300 KM ASTRIDE THE APRILIA TUAREG 660 FACTORY BY GCORSE. DREAMING OF THE BAJA CALIFORNIA

December 2022 – There is one constant in the life of Klaus Nennewitz, mechanical engineer (specialisation in vehicles) of German origins, and freelance journalist for the past three years for motorcycle magazines from various countries, expert in the world of Adventure bikes. The constant is that he has been riding bikes and racing off road since he was 13. A passion that has never died down and which continues to be part of his life, attending and covering dedicated events and tours. In short, combining passion and profession is truly a “lucky card” that Klaus knows how to play well. One of his more recent “undertakings” was his participation in the 2022 Sardinia Swank Rally, reminiscent of the ’80s era “legend” – the Sardinia Rally – the first organised outside of the African continent and, at the time, an official qualifying trial for the vehicles participating in the rally World Championship, such as the Paris-Dakar and the Pharaohs Rally.

Sardinia Rally, 1st edition 1984: “After crossing all of Sardinia from north to south, over mountains and valleys all the way to the island’s golden beaches, and after touching Olbia, Alghero, Cala Gonone, Chia, and Villa Simius, the Rally ended in Cagliari with the win going to Andrea Balestrieri, the greatest Italian rider of the time, the first Italian to finish the Dakar and the first on the podium, astride an Aprilia Tuareg 250” (Source: Moto.it). 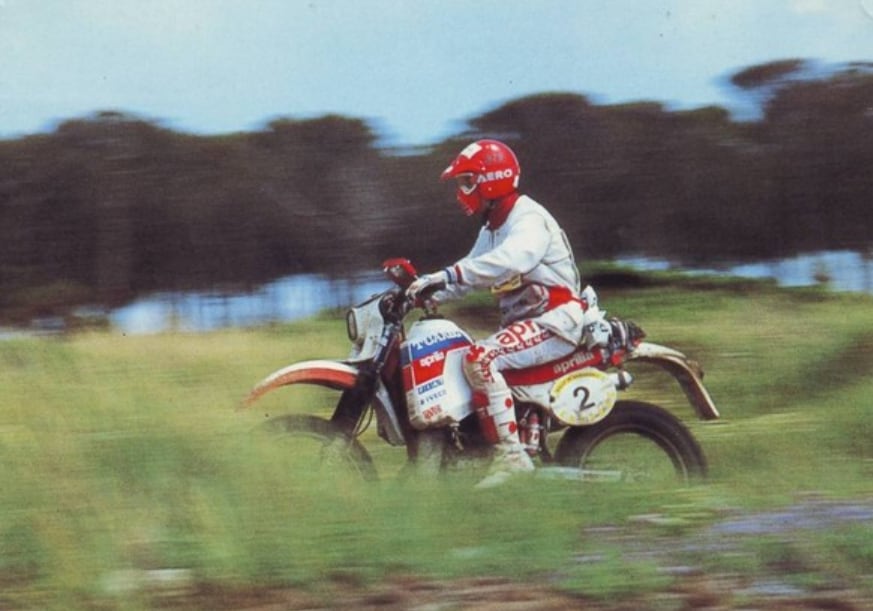 Andrea Balestrieri (Parma, 1959) also boasts a third-place finish in the Dakar Rally (1986) out of seven times participating in the African competition; the last was in 1989 astride an Aprilia Tuareg Wind 600.

The recreation of the Sardinia Rally has been back in vogue for a few years, conceived and realised by rally champion Renato Zocchi. The fourth consecutive 2022 edition was held from 27 September to 1 October, the result of a partnership between Deus Ex Machina and Adventure Riding (the event organising company, headed up by Zocchi). It was an edition with record participation: 220 riders from 10 nations. The formula for its success is to combine the characteristics of a raid rally, complete with road book for navigation, and special trials, including adventure and exploration of the fascinating Sardinian territory (info: eu.deuscustoms.com/blogs/blog/swank-rally-di-sardegna-2022).

Klaus explains, “The Swank Rally programme is demanding. It includes a nocturnal prologue, with the start from the Malpensa Motocross Track at the gates of Milan. Then there is the transfer to Genoa with the second special trial and three legs in Sardinia for a total distance of almost 1,300 km, with a large part on off-road tracks.” Klaus was riding the Aprilia Tuareg 660 Factory by GCorse, a rally bike version set up by the renowned Parma-based customizers, Gianfranco and Vittoriano Guareschi. The bike made its début in May at the Italian Moto Rally Raid TT Championship, in Sardinia, ridden by GCorse rider Francesco Montanari (photo below).

The Guareschi brothers comment, “We are working hard to obtain maximum performance from the bike and to be capable of taking top positions… We believe strongly in the project, and we want to become the point of reference… for Aprilia Tuareg 660 customers all over the world.”

So, another good “test” for the customised Guareschi bike was the Swank Rally. Klaus continues, “I took advantage of the hospitality of Francesco Agnoletto’s Motor Bike Expo team, and I wish to thank them, but it is a raid rally for all. It brings professionals and amateurs together, thanks to a competitive and a non-competitive category and most of the routes are within the potential of anyone who has off-road experience and wants to tackle them astride a light enduro. If, on the other hand, you want to participate with an adventure bike, everything becomes more challenging.” 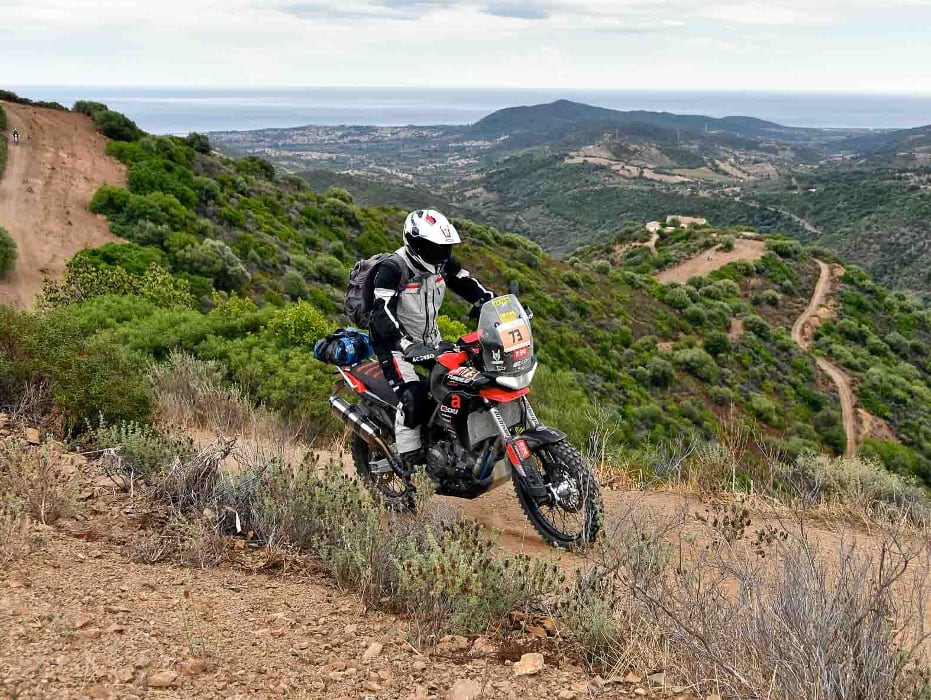 “It’s easy to gain familiarity with this bike,” Klaus says. “You just need to be careful during the braking phase, when you need remember that you aren’t dealing with the weight of a single-cylinder. Despite having raced in many off-road disciplines, my true passion is Rally-Raids - riding over long distances, crossing countries and regions, astride a bike that gives you the confidence to be able to tackle any situation. In this respect, the Tuareg 660 by Guareschi Corse is truly exceptional.” 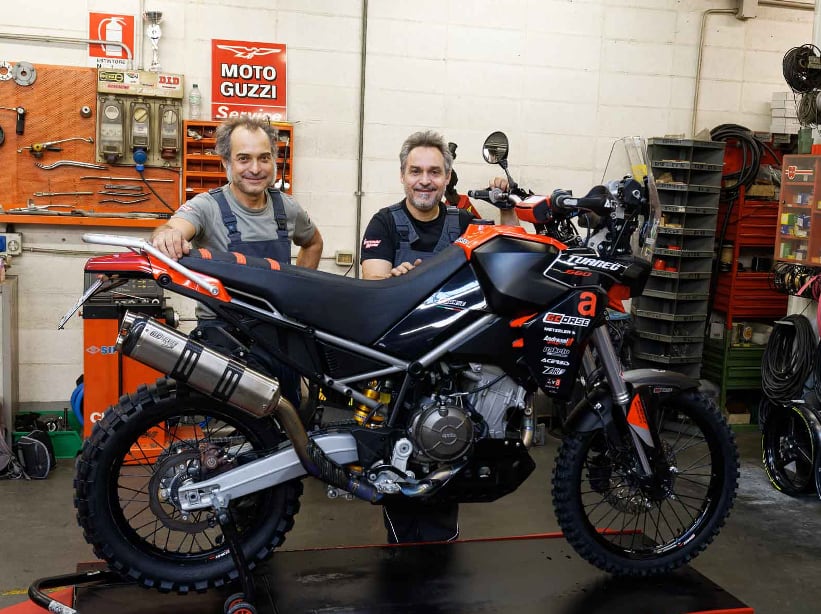 The Guareschi brothers and their Aprilia Tuareg 660 Factory in motorally version by GCorse version.

And if he says so, you can believe it. He knows Aprilia bikes well. “I joined Aprilia in 1994 and stayed there for 10 years in the technical office, covering the role of projectleader for production bike development. That meant that I worked on some models that became pillars of Aprilia history, such as the Pegaso 650 Cube (1997), the SL 1000 Falco (1999), and I had the pleasure to lead the team that brought the first RSV Mille Tuono R Limited Edition to life in 2002 (editor’s note: in the photos below).

In 2003, I left Noale, Italy (Aprilia headquarter) to join Derbi in Barcelona (Spain) where I conceived, developed, and put into production the largest engine displacement bike ever built by a Spanish motorcycle company: the Derbi Mulhacèn 659 (editor’s note: in the photos below, by Klaus Nennewitz).

As technical director, I took the models with the new 4-stroke 125 cc Piaggio engine to production, which are still manufactured to this day, among others, with the Aprilia brand. Subsequently, I continued to design, develop, and industrialise engines and bikes for various brands in different countries, but I will remain forever grateful to Aprilia. They gave me the opportunity to learn the profession of motorcycle design at 360° in a company which is unique in the world, where professionalism went hand in hand with the passion for two wheels. An experience like that results in a lifelong bond with a brand and that is why I have always loved and always will love the bikes from Noale. Even more today, seeing with pleasure that the fire which burned in us then is still burning strong, and now they are back in the off-road world - my favourite habitat.” 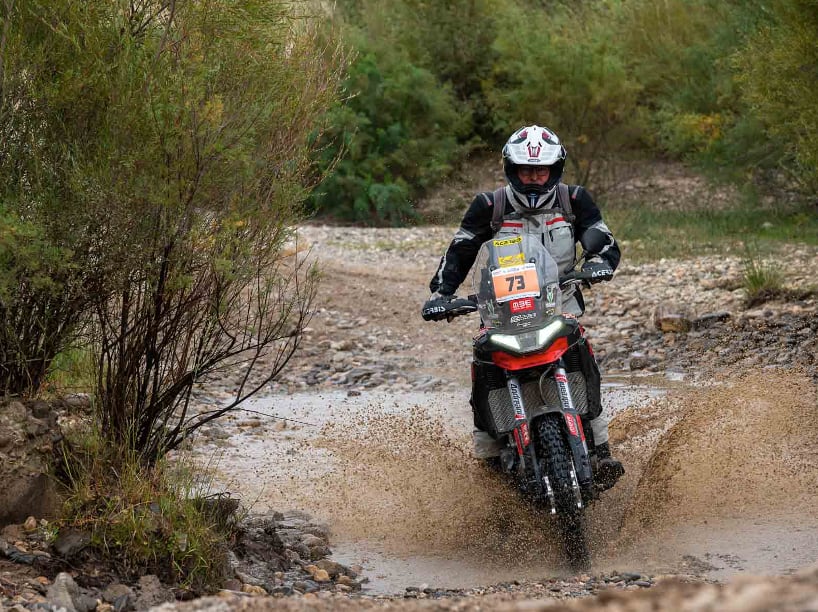 And about the Tuareg, Klaus says, “My first memory of the Tuareg dates back to 1986 when, at a very young age, I found myself racing in an off-road competition of 1000 km in 24 hours against Ivan Alborghetti on the Tuareg 250 2-stroke, a bike that had already won the Sardinia Rally. In short, the years when I was cutting my teeth were the same ones when the name Tuareg was extremely important. And, skipping forward 30 years, at the first rumours of a new Tuareg 660, and considering the great technical capabilities of the engineers from Noale in developing outstanding chassis architectures, I was certain that it would be a fabulous bike. At the media presentation in Sardinia, in November 2021, I had the chance to put my theory to the test in the most spectacular of ways. I had stayed back with one of the group leaders and we found ourselves - just the two of us - playing with the bikes on a section of fast trails, showing off with long parallel drifts and crossing trajectories. It was about twenty kilometres of pure fun, ratified by a hearty laugh that we both burst into as soon as we had stopped. There, I had my first taste of the extraordinary stability and balance that optimise control of the Tuareg 660.”

Klaus continues, “The first thing that Aprilia got right is the ergonomics. I think it is one of the best bikes on the market today to ride Offroad standing up. It lets you go into corners with the rear brake locked and switch to opening up the throttle in a single motion, leaving a single, uninterrupted dark streak on the ground. That experience was enough to begin dreaming of a true off-road adventure in the saddle of a Tuareg. So, when I heard that Guareschi Corse had prepared a version to compete in the 2022 Italian Motorally Championship, I knew that I had to reach out. I am very familiar with Gianfranco and Vittoriano’s work, so I knew that if they had put their hands on a 660, they had the skills to have transformed it, potentially, into the best adventure bike around. In 2021, I had the good fortune to participate in the Sardinia Swank Rally with the Moto Guzzi V85 TT, set up by them also in Motorally mode, so this year I upped the ante. Almost jokingly, I called Guaro and asked him, ‘So this time you’ll leave me the Aprilia?’” 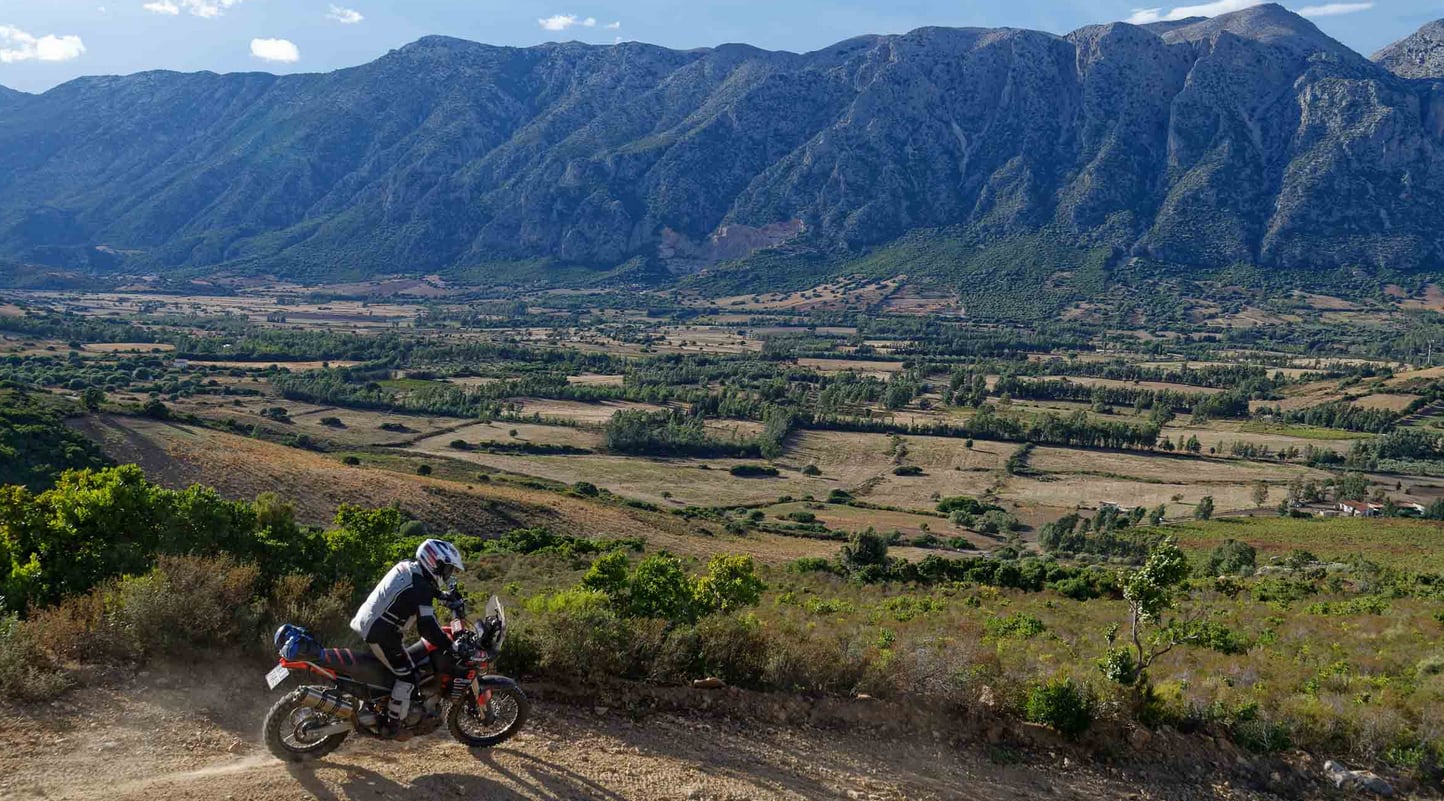 What was the best moment for you in the Swank Rally? “In the life of a rider, if you’re lucky, you get into a ‘flow’ where everything is perfect. You no longer feel the heat or the fatigue or the pain, but just the joy of riding when you meld together with the bike to become ‘man-machine.’ With the Guareschi’s Aprilia Tuareg 660, that is exactly what happened to me, tackling a technical route of about 30 km in a single run. The ideal combination of track, bike, body, and mind: a psycho-physical state that doesn't happen with every bike. At the most, it has happened to me maybe a dozen times. This memory is added to this short list.” The next adventure? “Baja Rally, in California. I think it is the perfect bike for those trails - extremely fast and technical. It would cut a fine figure!”
Baja Rally info:
www.bajarallymoto.com

Source of images of Klaus in the Swank Rally 2022: Photo by Klaus Nennewitz, Fotografica Sestriere and courtesy of Deus Ex Machina.

Another good read is the interview with Klaus Nennewitz on BEARACER CLUB (the official Aprilia community - free registration): www.aprilia.com/en_EN/be-a-racer-club 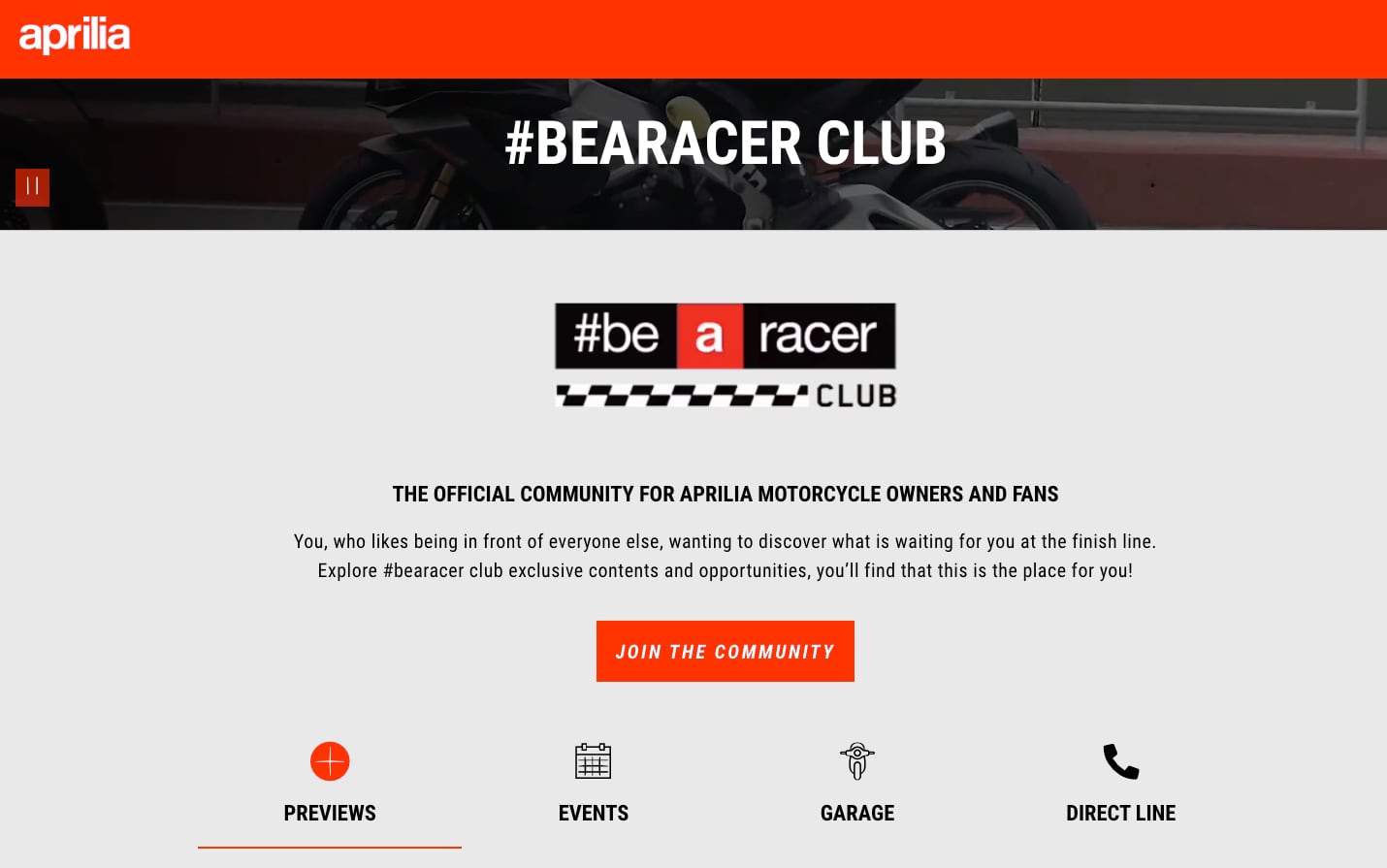