APRILIA DOMINATES IN MOTOAMERICA IN THE DEBUT RACE 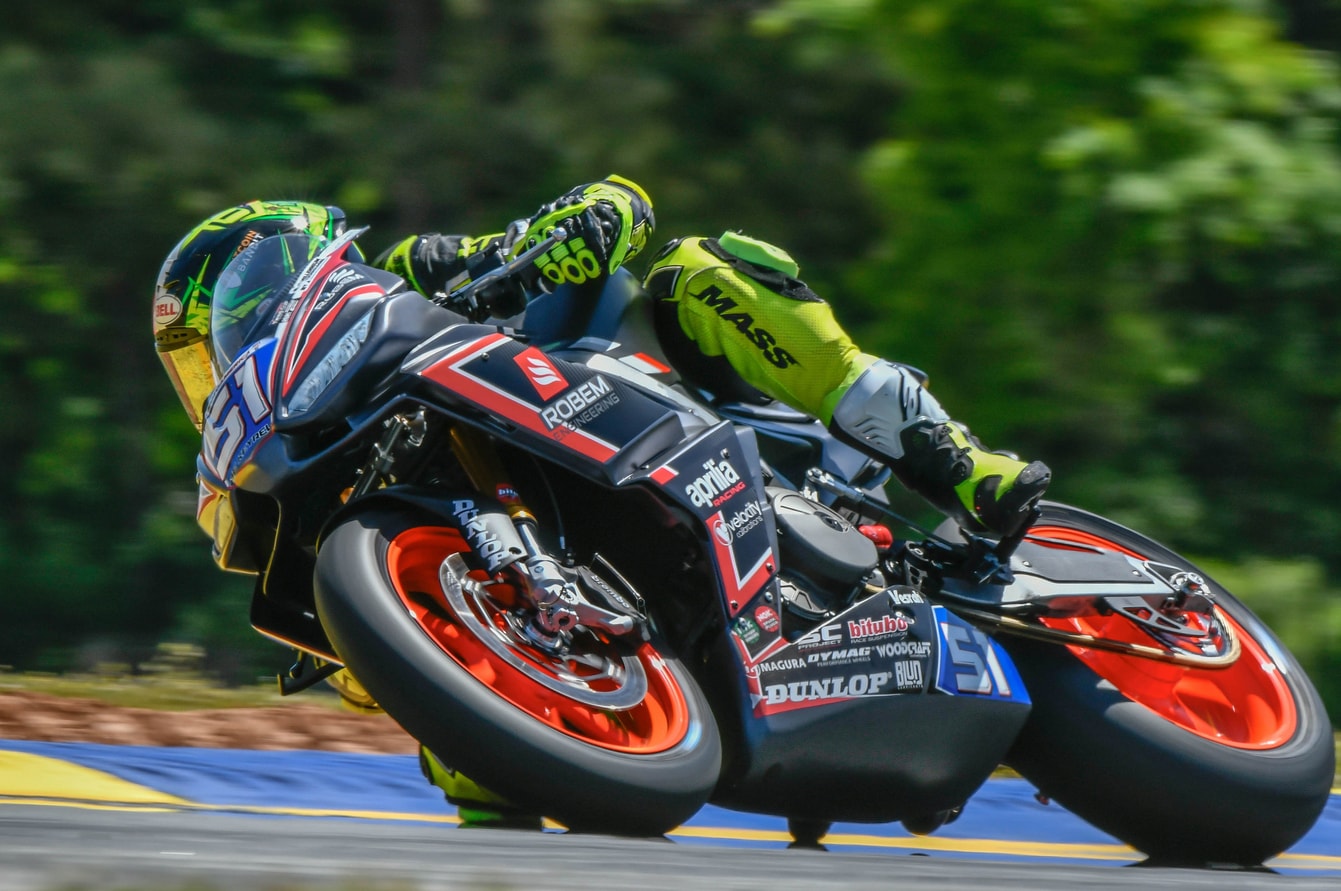 THE ADVENTURE OF THE NEW RS 660 STARTS WITH A HAT-TRICK IN THE AMERICAN CHAMPIONSHIP. DE KEYREL, BARRY AND SCHULTZ TAKE THREE APRILIAS ON THE PODIUM IN THE OPENING RACE OF THE TWINS CATEGORY IN ATLANTA. 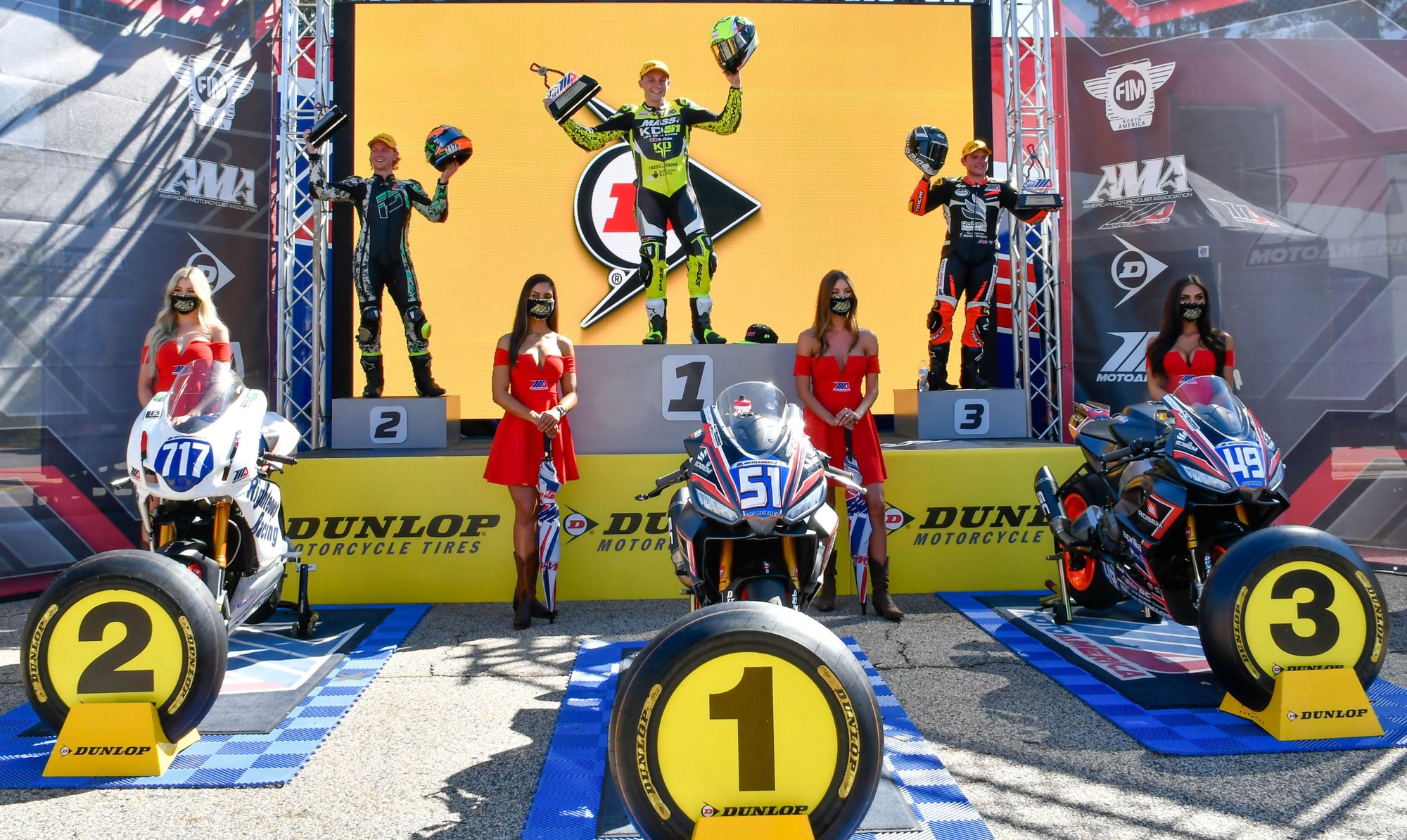 Atlanta (USA), 2 May 2021 - A perfect start for the debutant Aprilia RS 660 in the Twins category of the MotoAmerica Championship. On the Road Atlanta circuit, three Italian motorcycles conquered the first three positions in a fierce grid of 23 contenders.
An extraordinary demonstration of strength that exalted the dynamic and engine qualities of the new RS 660. Especially considering that the teams had very little time to prepare the season and carry out tests with the brand-new twin-cylinder from Noale, homologated in America just in time for the start of the championship. It is a dazzling start, in some ways unexpected, that places the RS 660 among the favorites for the final victory in the prestigious US championship. 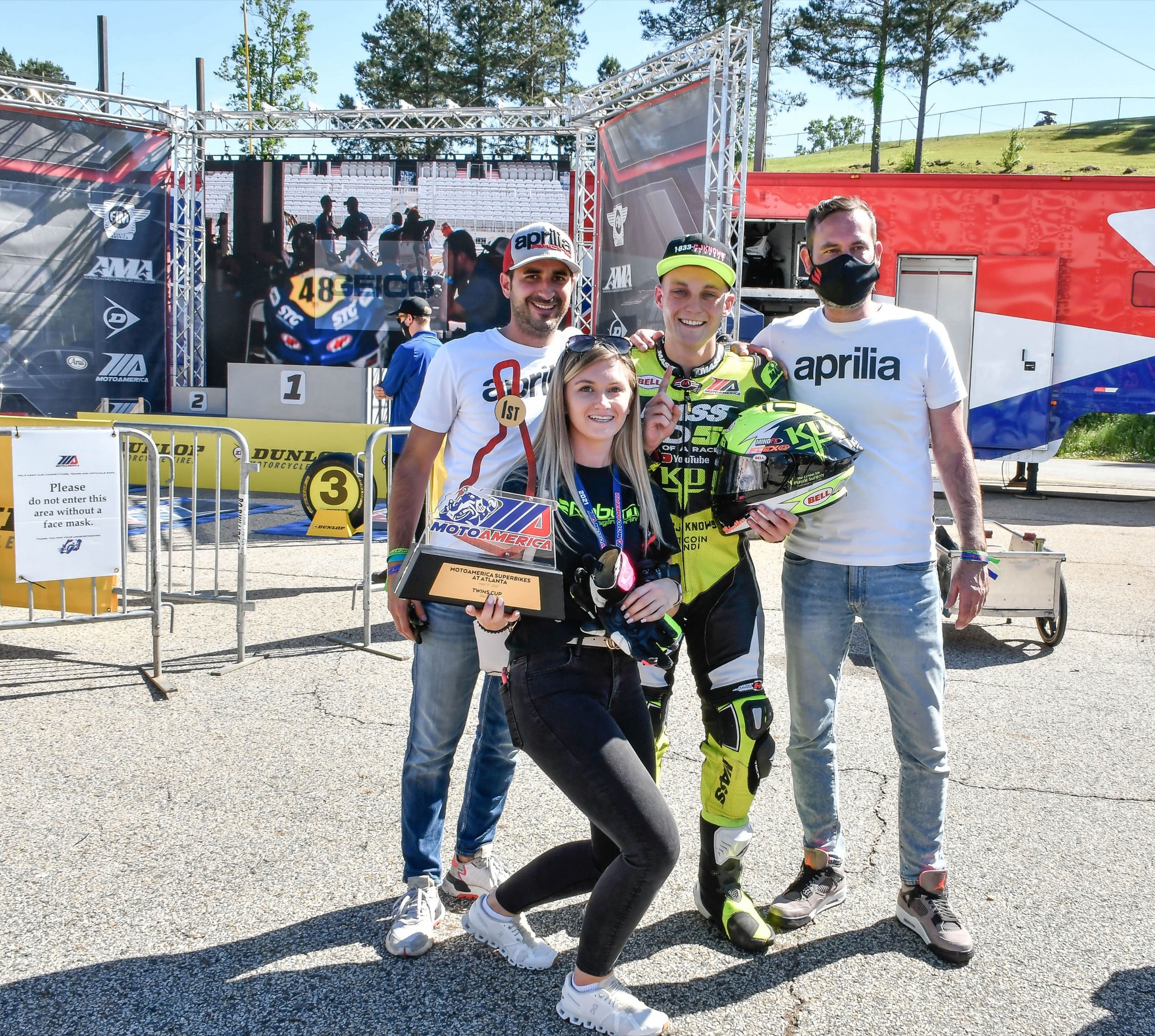 Winner Kaleb De Keyrel (photo above), who started from the second position on the grid, gave the Robem Engineering team its first satisfaction, ahead of Jody Barry (Righteous Racing) and teammate Hayden Schultz.

Hayden Schultz on Aprilia RS 660, third place on the podium.

“It was super fun - says the winner - really a good battle. To come here with virtually no riding on the new bike and already be so fast shows that I did my homework well. The Aprilia came out so close to the championship that we didn't have much time. I wouldn't be here without Matt Spicer and Gene Burcham and all of Robem Engineering who put so many hours into the Aprilia RS 660 and worked on everything to get it ready for the race.

Obviously, I was involved in the championship fight last year but didn't win, so now I'm hungry to prove that I can stay out front and win races.”

Aprilia RS 660, launched last October, is revolutionizing the concept of sportiness, it is so light and effective between the curves that, while designed to be usable daily on the road, is capable of transforming itself with a few changes into an extremely fast and fun bike between the curbs. The dynamic qualities, the rigour of the frame, the reduced weight and the exciting performance of the new 100 HP twin-cylinder engine enhance the driving pleasure of a motorcycle that, after being one of the most eagerly awaited novelties, has proved to be fun and enjoyable, able to give emotions in every situation of use. 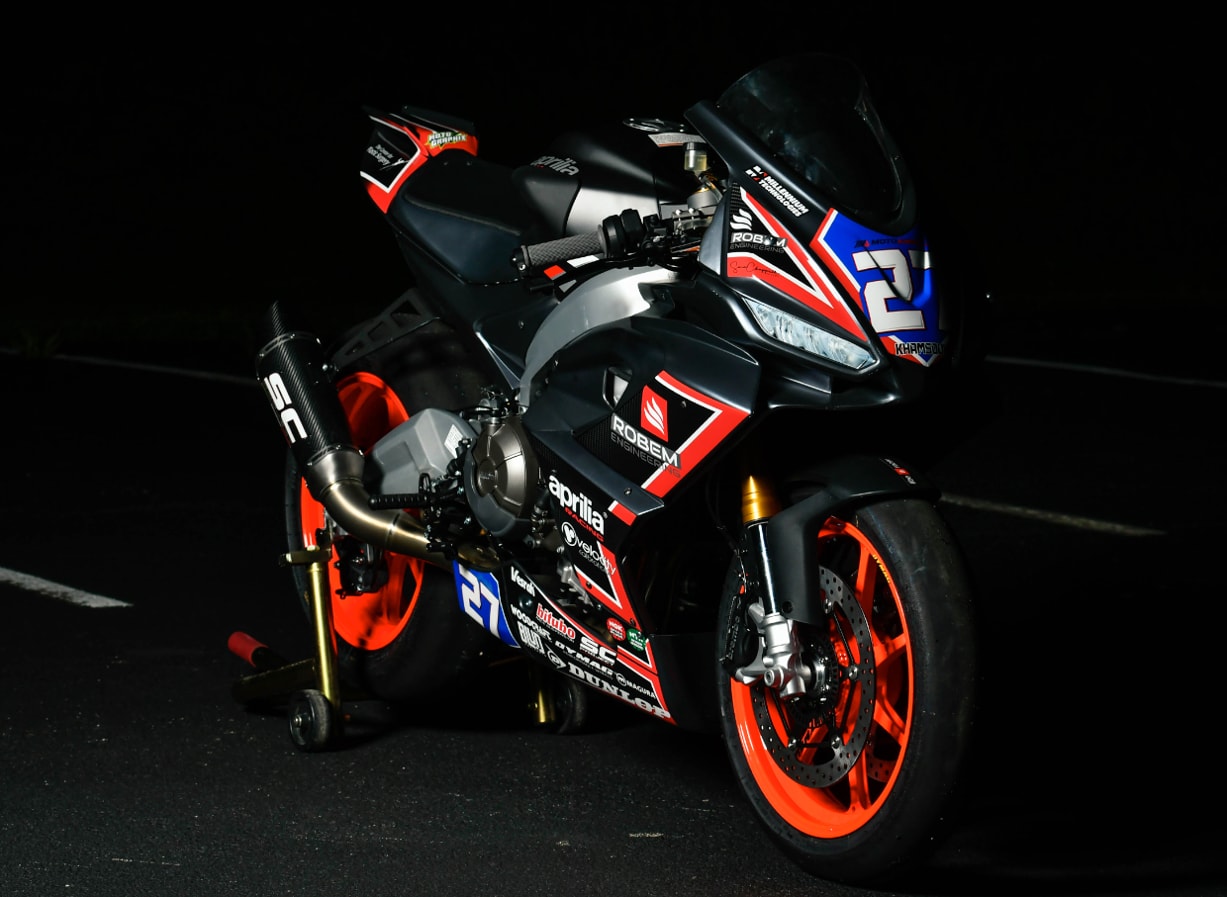 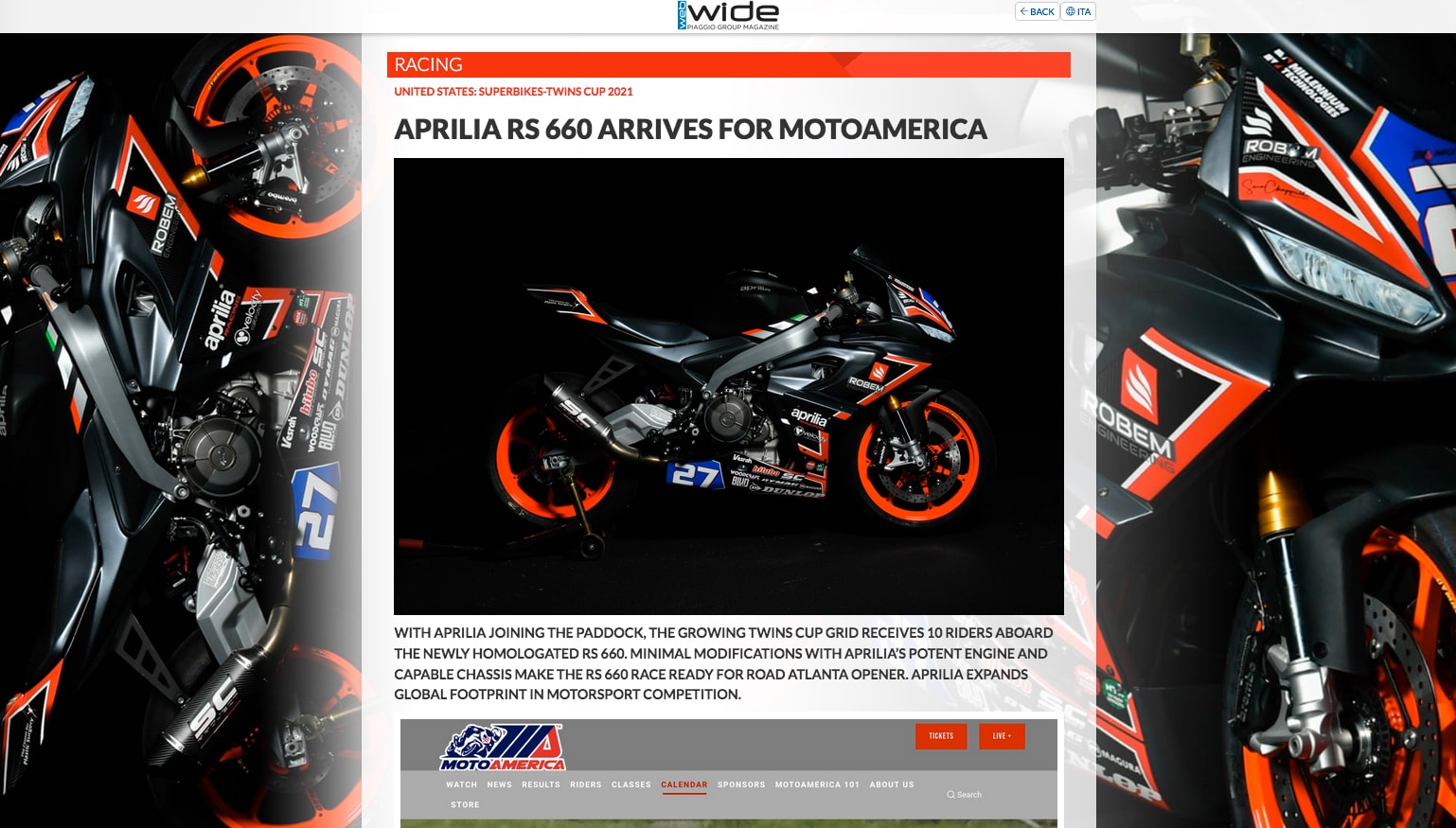