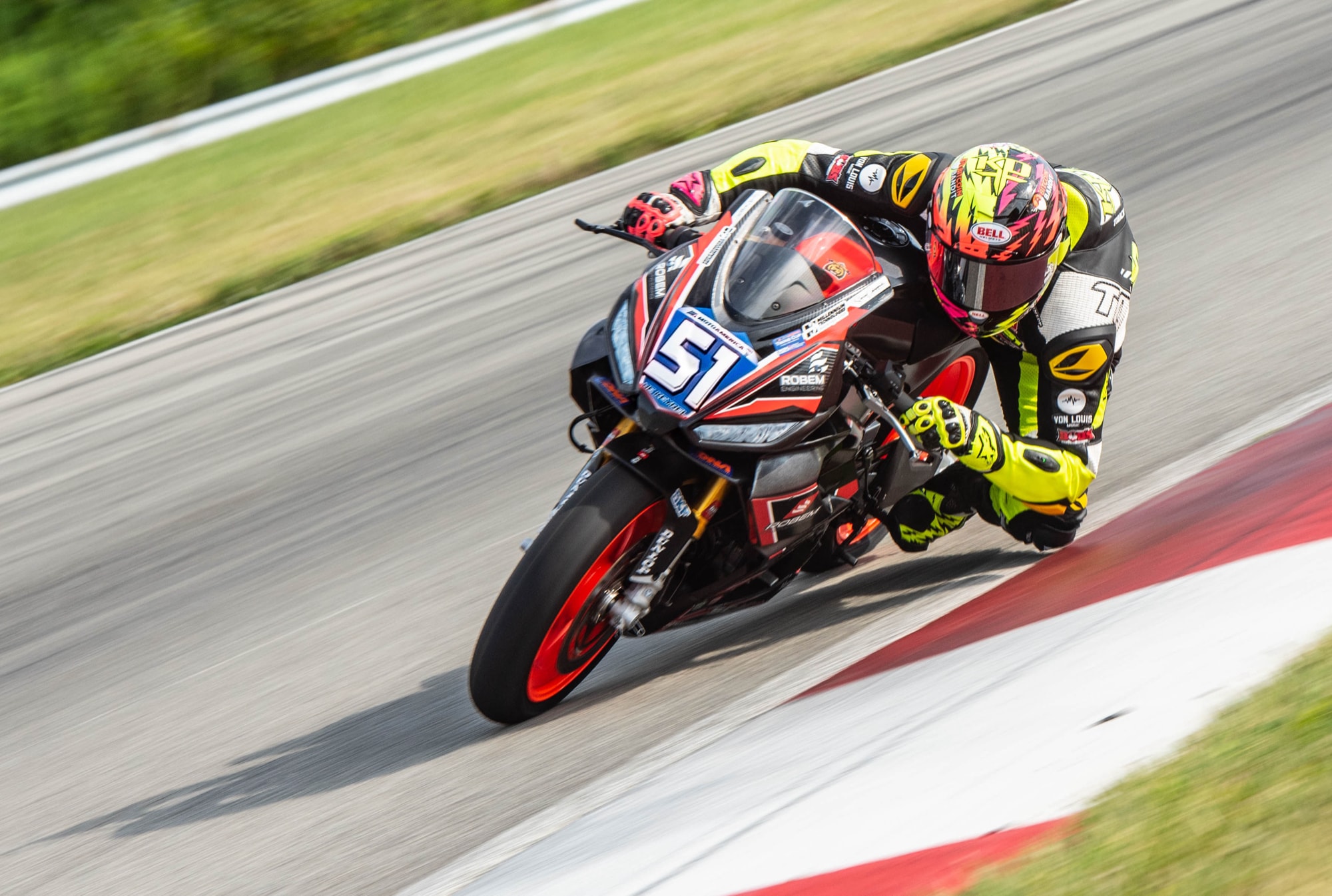 FOURTH WIN IN A ROW FOR THE ITALIAN MEDIUM-SIZED SPORT BIKE, MORE AND MORE THE PROTAGONIST IN THE TWINS CLASS. NO FEWER THAN FIVE RS 660 BIKES IN THE TOP TEN IN PITTSBURGH. 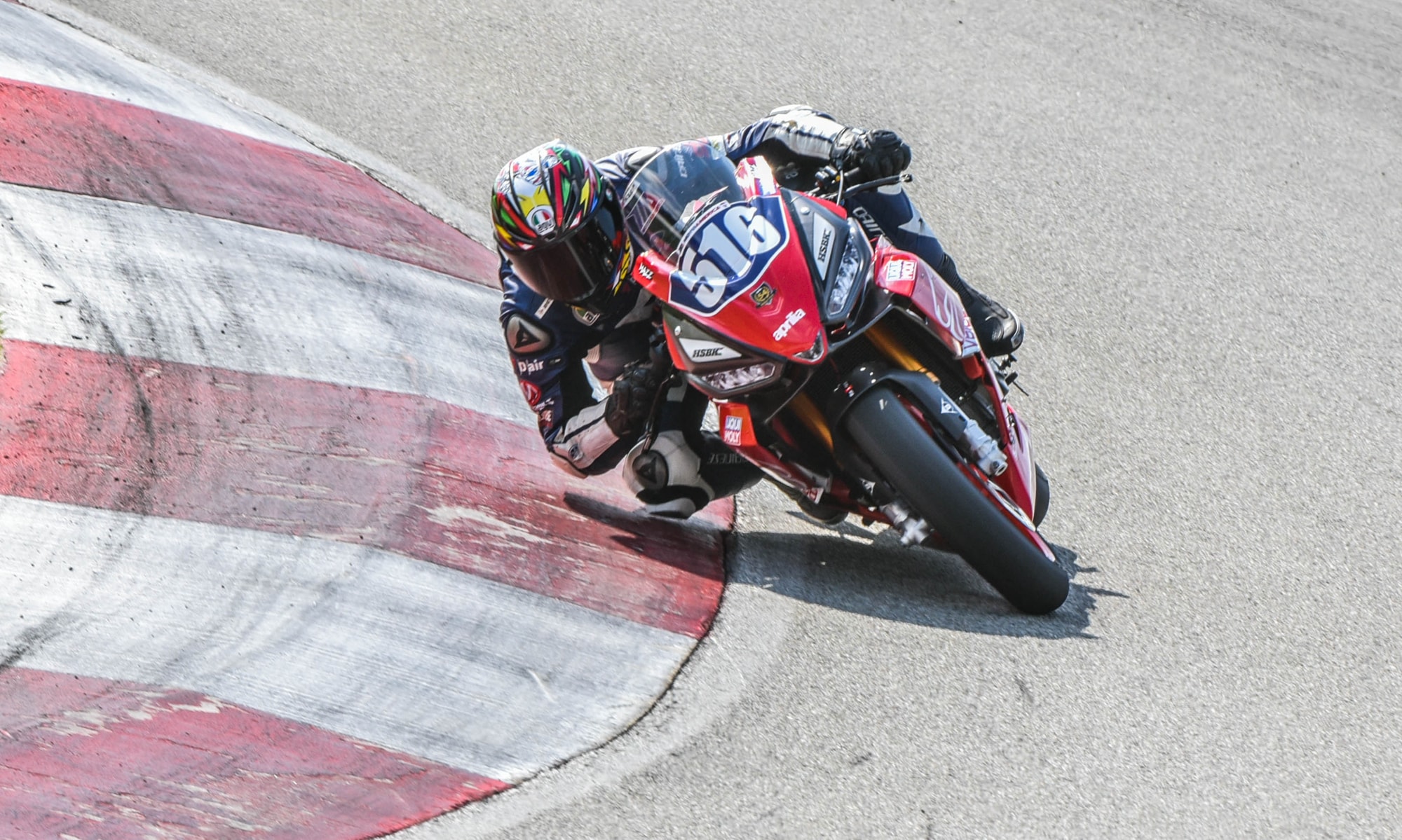 Pittsburgh, Pennsylvania (United States), 17 August 2021 - Aprilia RS 660 dominates more and more in the Twins Cup, the exciting American series dedicated to twin cylinders that is part of the prestigious MotoAmerica championship.
In fact, the medium-sized sport bike from Noale has been undefeated for over a month, taking its fourth consecutive win in the round held on Saturday, 14 August at the Pittsburgh International Race Complex, in Pennsylvania.

It’s a winning streak that began on 9 July on the historic Laguna Seca circuit with Kaleb De Keyrel, followed by the double win at Brainerd International Raceway, in Minnesota, earned by De Keyrel and Anthony Mazziotto. And it was precisely the latter who, astride his team Veloce Racing RS 660, won again in Pittsburgh. Four victories on three tracks with very different characteristics (seven in all out of eleven races held thus far), as further demonstration of the dynamic and motoring qualities of the brand new made in Noale medium sport bike. 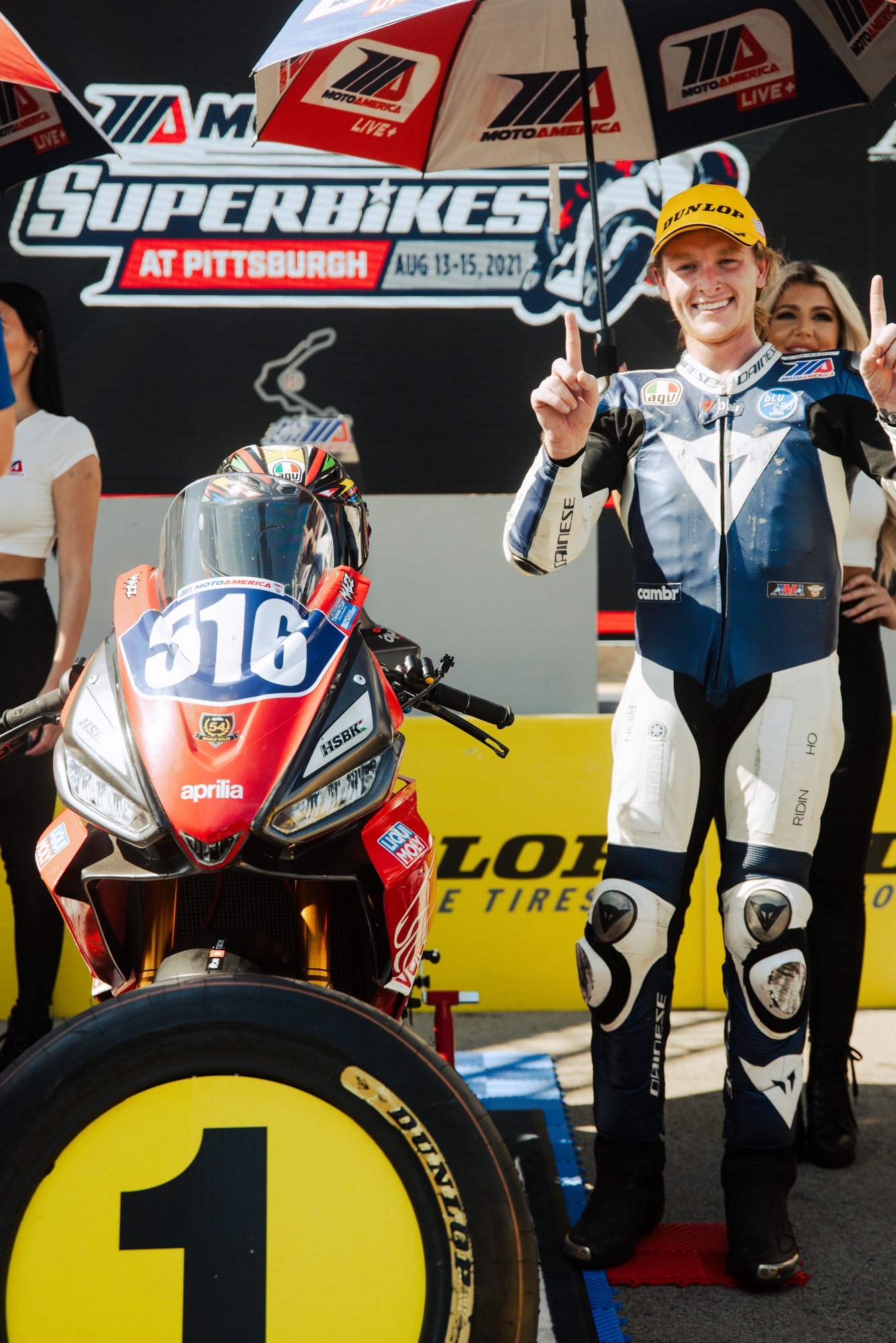 These results are convincing more and more teams and riders to choose the Aprilia RS 660 to compete in the Twins Cup: there are now 8 Italian twin-cylinders on a starting grid with 30 riders. In Pittsburgh, five of these finished in the top ten.
With just three races left on the calendar, Kaleb De Keyrel (Aprilia RS 660 of team Robem Engineering) continues to hold onto the lead in the overall standings, 53 points ahead of Jackson Blackmon (Yamaha).

Image source and info: motoamerica.com/twins-cup-class
Video of the races: www.facebook.com/MotoAmerica

The Aprilia RS 660, launched last October, is revolutionising the concept of sportiness. It is so lightweight and effective on the corners that, although conceived for daily street use, it is fully capable of transforming into an extremely fast and fun bike on the track with just a few modifications. The dynamic features, sturdy frame, reduced weight and exciting performance of the new 100 HP twin cylinder enhance the riding pleasure of a bike which, after being one of the most eagerly anticipated new releases, has proven to be fun and enjoyable, capable of thrilling in any riding situation. 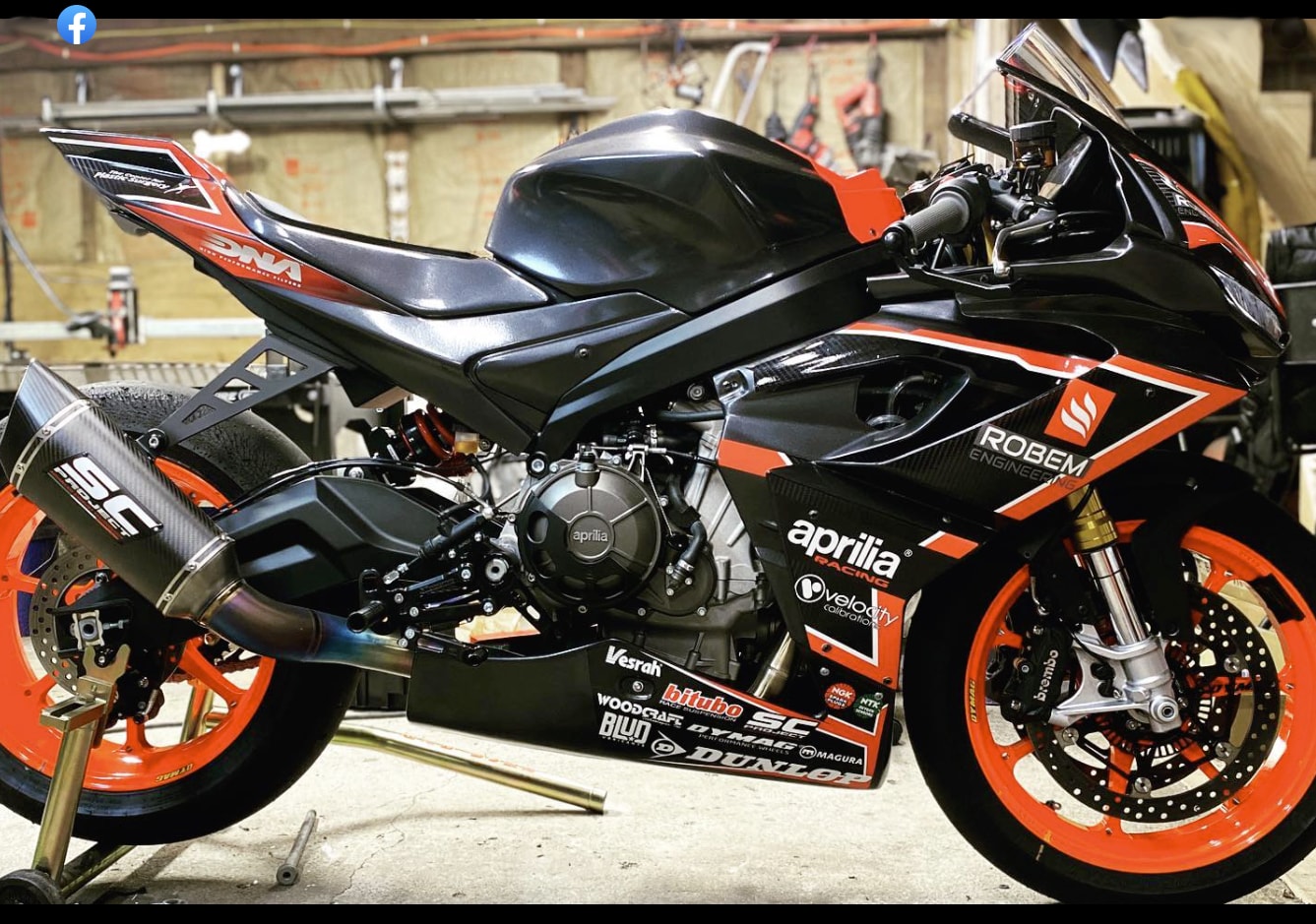 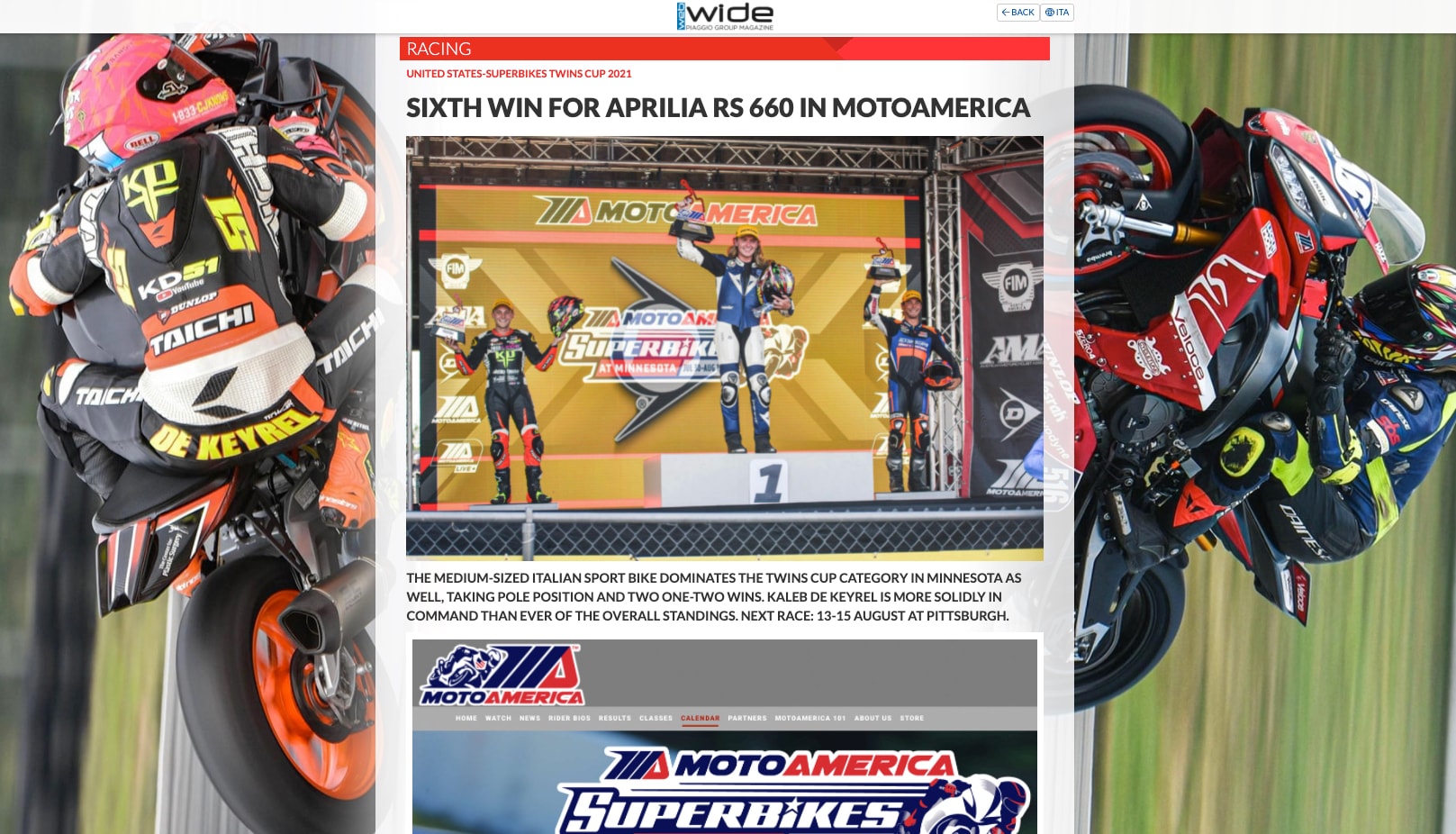