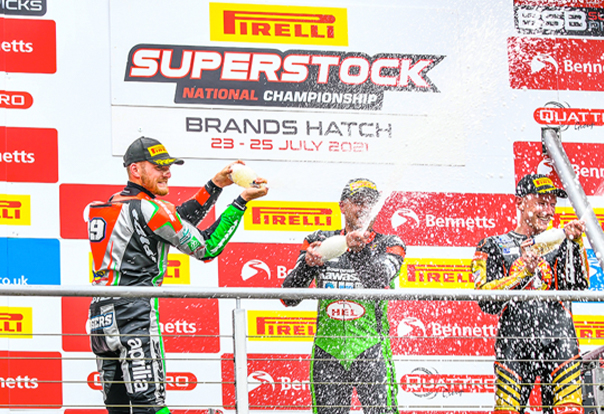 Brands Hatch raceway, UK, 23-25 July 2021 - Fraser Rogers was triumphant aboard the Aprilia RSV4 as he rode the IN Competition team to not one, but two second place podiums. Spirits were high coming off the back of Frasers maiden win in previous the Superstock championship at Knockhill, placing him 3rd in the championship behind Taylor Mackenzie and he was ready for more. 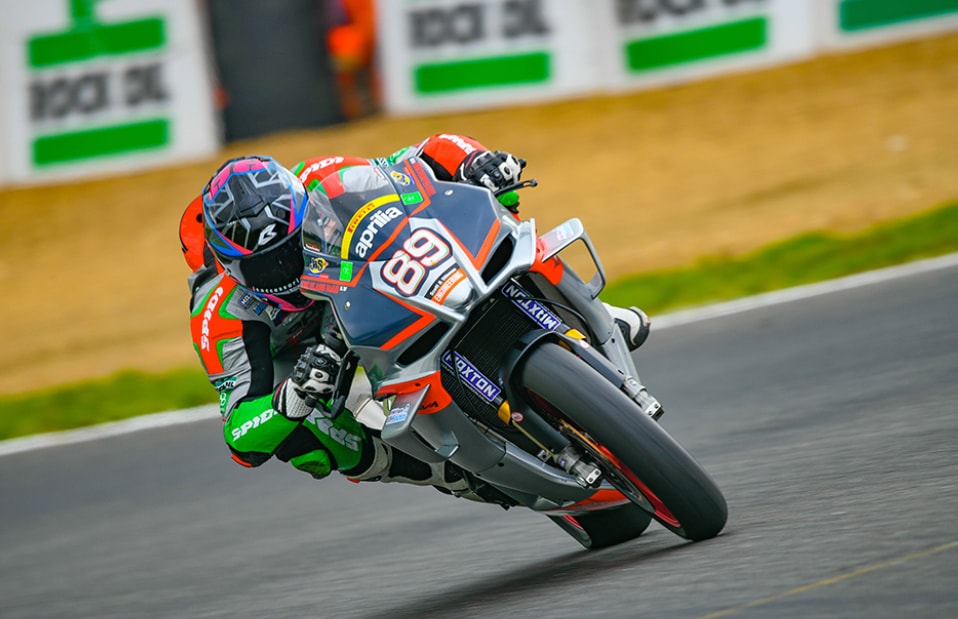 The weekend started out with reasonable weather conditions at the 2.448-mile circuit on the Kent/London border and in the Friday free practice sessions he found himself 6th on the leader board with a few adjustments needed to the settings, but he was strong and by the afternoon session he had pushed his way up to more familiar territory of 2nd place where he improved his timings to a 1:27.718, only +0.2 off the pace set by Luke Mossey. 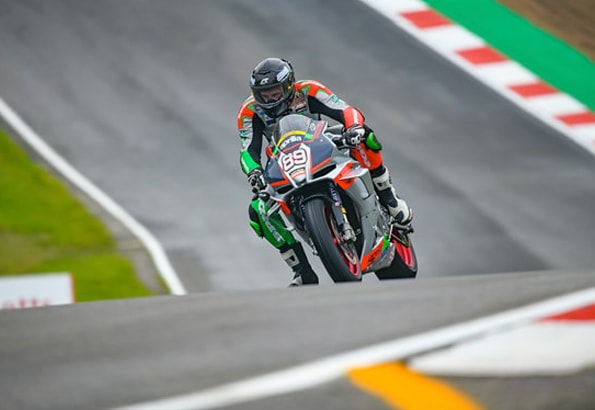 A jam-packed schedule saw the National Superstock championship out for 2 races over a three-day weekend meaning Saturday would be a quick turnaround for the team who were well rehearsed in this by now but one factor that could not be controlled was the weather. Damp conditions meant a change in tyre choice for the 30-minute qualifying session where Fraser was consistent throughout the 14 laps aboard the Aprilia RSV4 bringing it home in 3rd position. 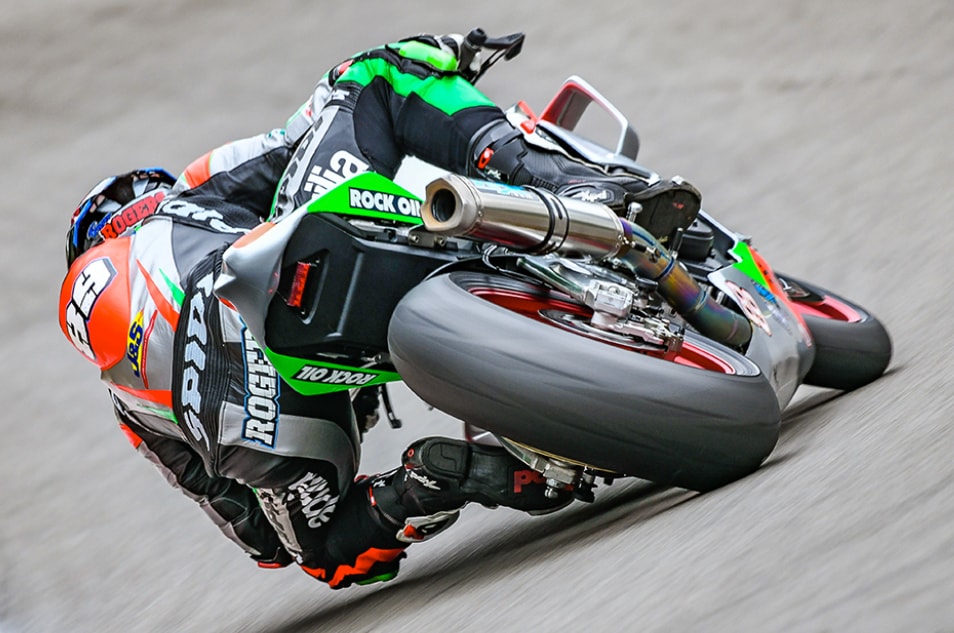 Starting from the front row of the grid for race one gave him a good advantage especially as he would be on the inside going into the steep turn one paddock hill bend. He stormed off the line and by lap 3 having moved up into 2nd he was now in a position to fight for the win, however Luke Mossey had put some length between him and Fraser making it impossible, it was a good battle, nonetheless. Fraser crossed the line in second, another well-deserved ride by the Swindon based rider. 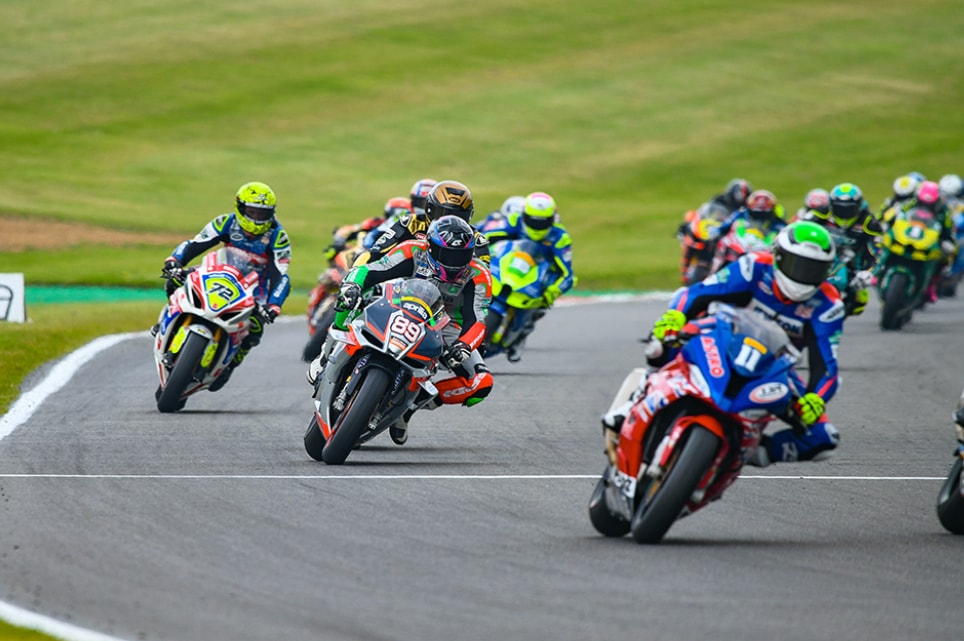 It was shortly after in the British Superbike race that unfortunately on lap one Fraser’s best friend and road cycling partner, Brad Jones had an accident on the last corner putting a halt to racing for some time. Fraser and the team wish to send their condolences to the family, all the PR
Racing Team and a speedy recovery from Brad. 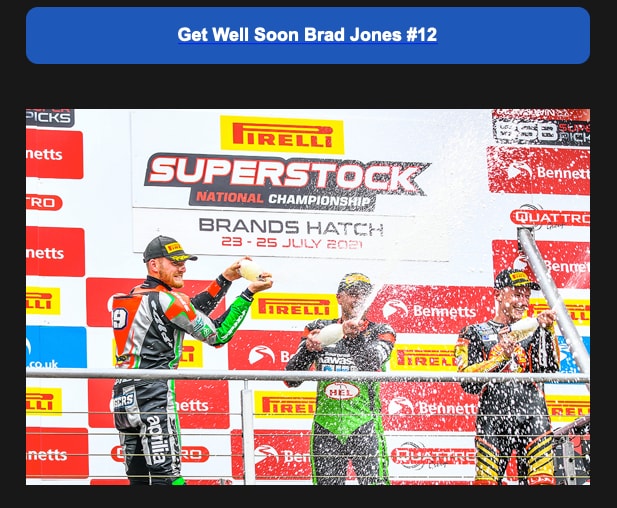 Sunday came around and a composed but somber Fraser made his way into the garage before the race. The race start was perfection as he tucked himself in behind race leader, Luke Mossey but on lap 3 Luke had a technical problem putting Fraser in the top spot and off he went. By lap 6 Alex Olsen who had clawed his way up from 6th on the grid was now chasing him down the overtake happened and Fraser could not hold him off. The deed was done, and Alex was now in front, but Fraser didn't give up without a fight as he tried to get underneath him and go around the outside, but he just missed out, Fraser crossed the line in second. 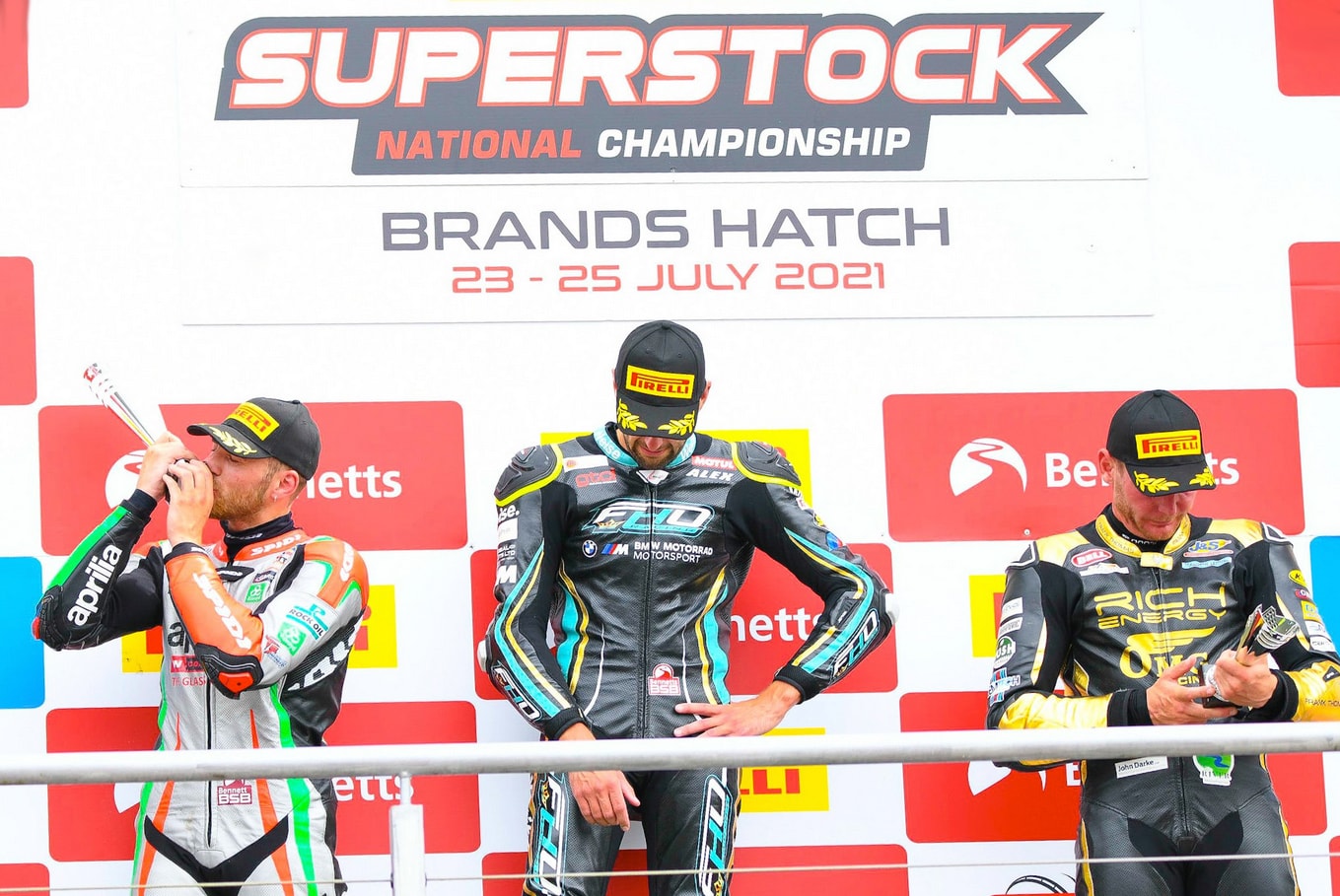 Fraser and the team rejoiced as he rode into parc ferme and embraced team manager, Ian Newton, unable to hold back the tears as he collected the trophy which he dedicated to Brad Jones. 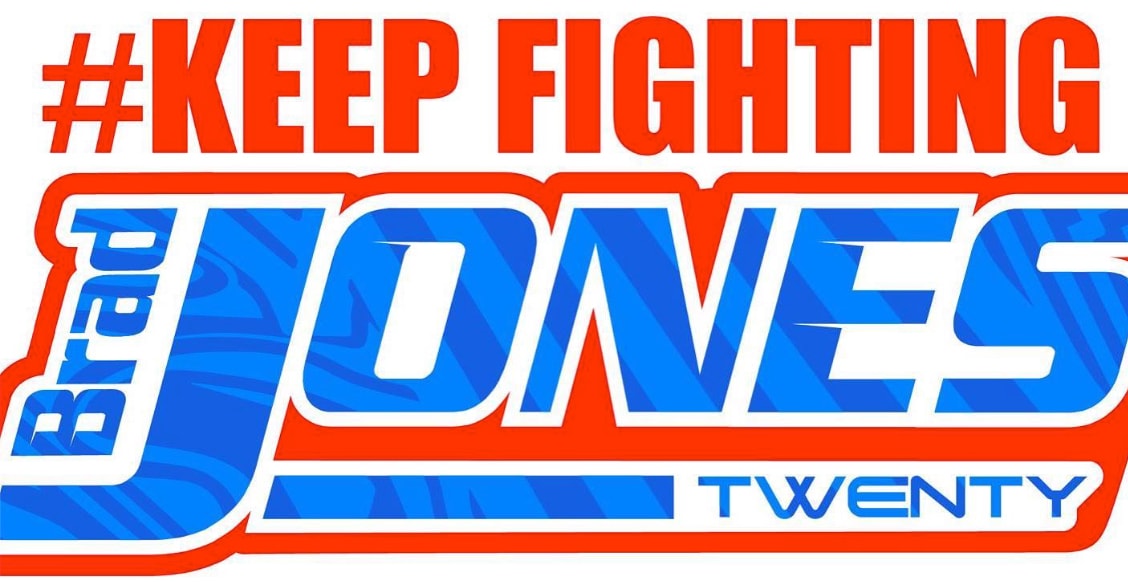 Catching up with team owner Ian Newton after the weekend he said: “Fraser and the team did an exceptionally good job on a very hard and emotional weekend. Our thoughts are with Brad and his family.”
After both of these heroic efforts by Fraser and the IN Competition team they now see themselves close the gap on the championship claiming a total of 40 points over the weekend just 7 points off 2nd and 10 points behind Billy McConnell in the top spot as they move on to Thruxton, Hampshire in a couple of days time for round 4 of the Bennetts British Championship.

(Special report and photos by IN Competition team). 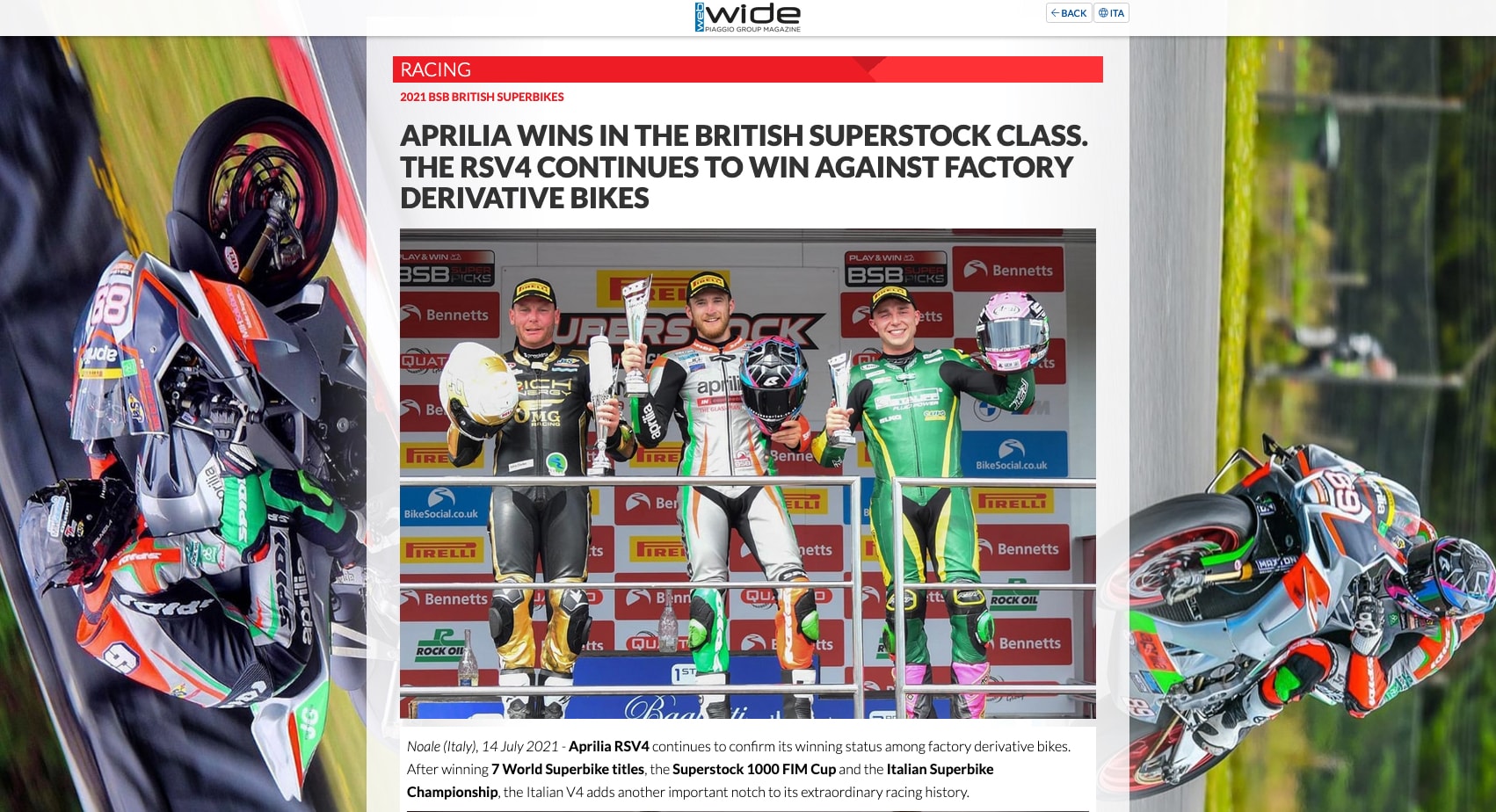