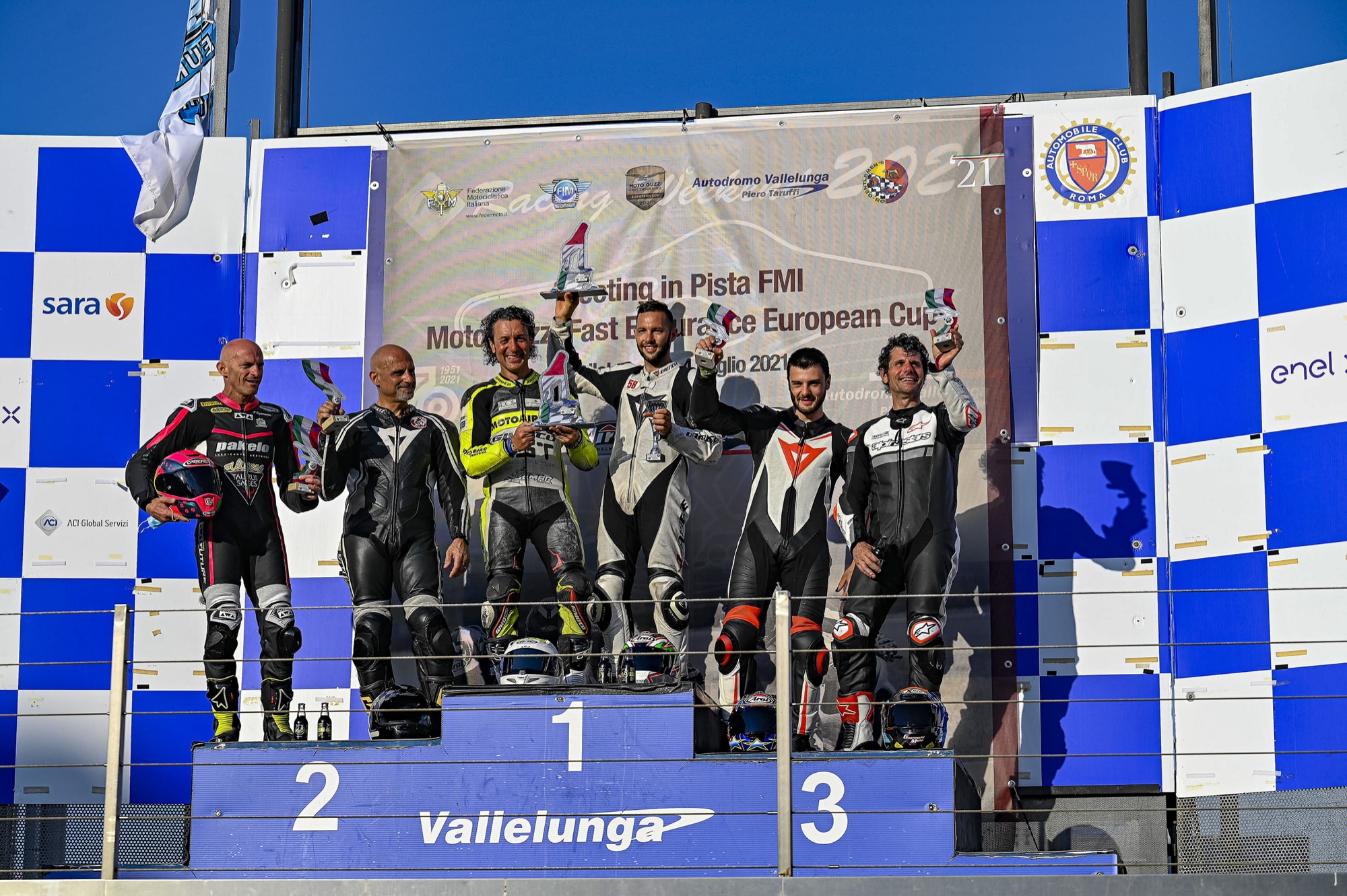 THIS WAS THE THIRD ROUND OF THE EUROPEAN CUP. NEXT ROUND IN MAGIONE ON 28 AND 29 AUGUST WITH DOUBLE RACE AND A BATTLE FOR THE TITLE THAT IS STILL WIDE OPEN.

Campagnano di Roma (Rome, Italy), 5 July 2021 - The Vallelunga raceway was the setting for the third-round weekend of the Moto Guzzi Fast Endurance European Cup. After the two 60-minute races held in Varano in May, on the track just outside Rome, 30 pairs of riders had fun battling it out in the longest and most demanding 90-minute “mini endurance”, as always astride Moto Guzzi V7 III outfitted with the GCorse Racing Kit and Pirelli Phantom Sportscomp RS tyres. 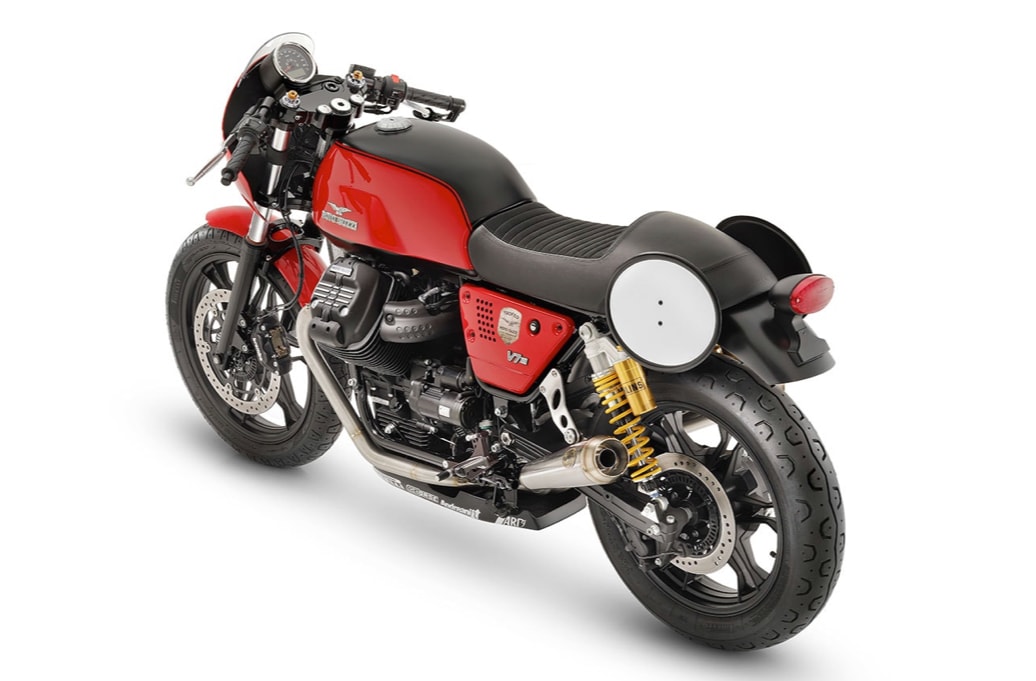 As early as the timed practice sessions, the playing field was extremely even, with the battle for pole position being decided on the razor’s edge. With an average of the best times at 2’00”856, Davide Rossi and Samuele Colonna of team Garage 71 prevailed by only 81 thousandths of a second over team Altinier Motorsport & Biker’s Island, made up of Emiliano Bellucci and Samuele Sardi, thereby taking their first pole position of the championship. Davide Rossi also had the satisfaction of the best lap at 2’00”286, averaging 123 km/h, numbers that once again demonstrate the great performance the “little” seven-fifty from Mandello in “racing” version is capable of. 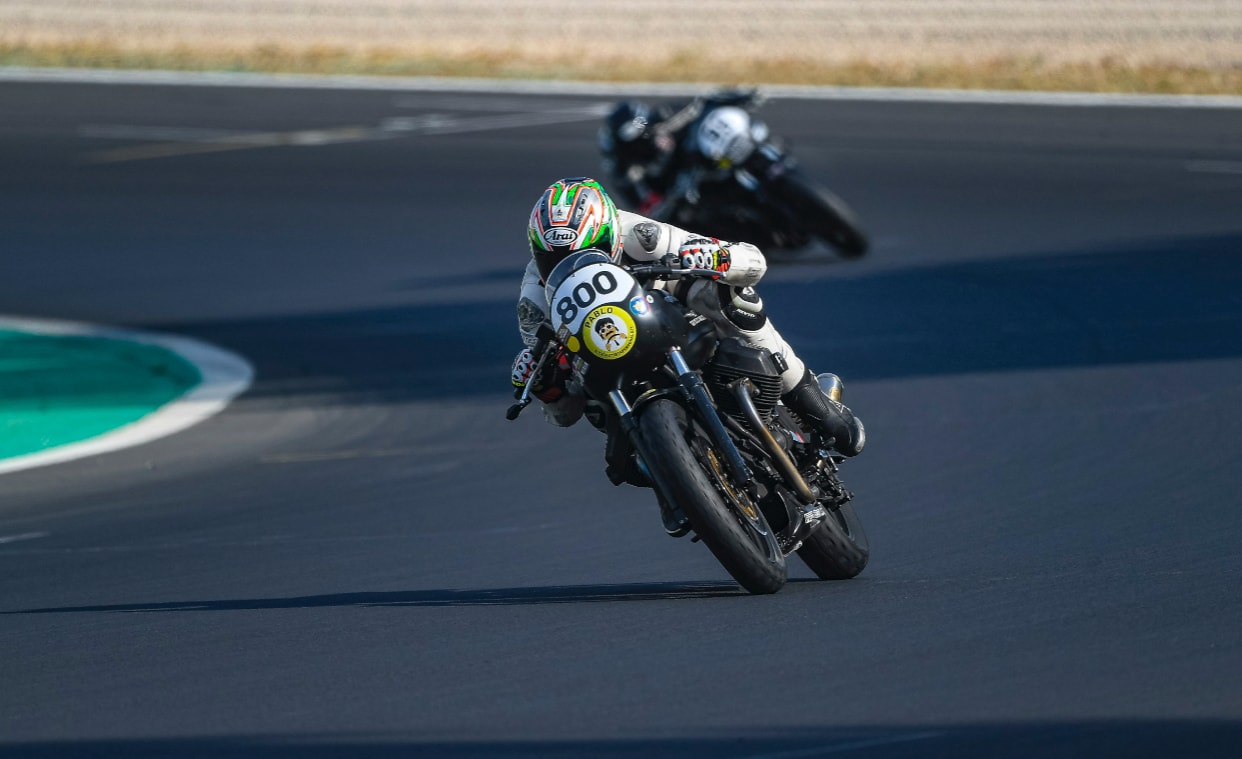 The race was not as fortunate for team Garage 71, with Samuele Colonna forced to retire after just 3 laps due to a crash. This left team Altinier Motorsport & Biker’s Island and Team Pablo to be the protagonists of a great battle for victory that lasted throughout the race. When an hour and a half had passed, the pair of Team Pablo riders had come out on top, with Francesco Curinga this time working alongside his friend - and previous rival in the hill climb races - Stefano Nari, making his début on the V7 III. A new duo that proved straight away to work extremely well together, even in the delicate rider change phases. 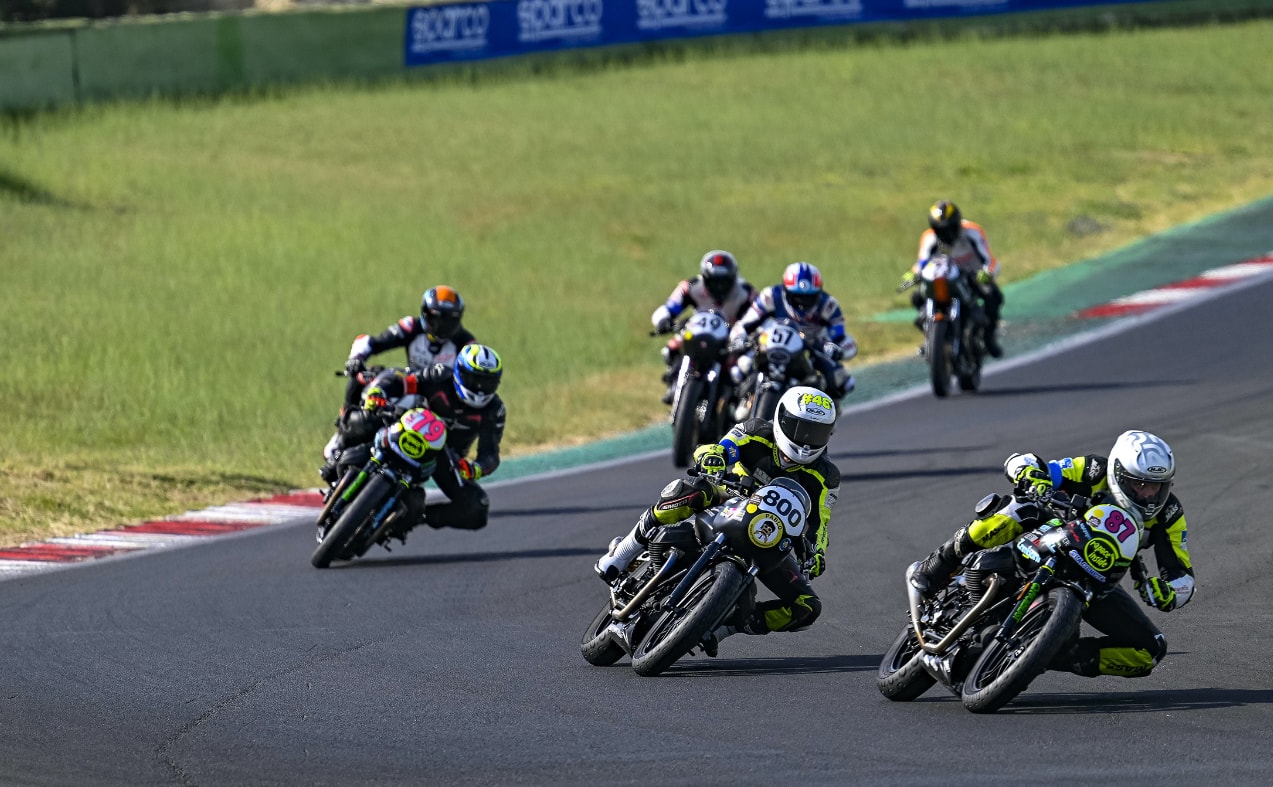 The third step of the podium, went to Guaracing Factory Team 1 (Gianfranco Rubini - Jacopo Rizzardi), incisive especially in the second half of the race and skilfully overcoming both the Moto Club dei Rapaci teams, who celebrated the “doubling down” of their commitment on the track with a double top-five finish. Team “2”, made up of Pierluigi Begossi and Marco Mirenda, in his Moto Guzzi Fast Endurance début, finished fourth ahead of their friends Luca Fornasiero and Mauro Rossignoli, of team “1”. 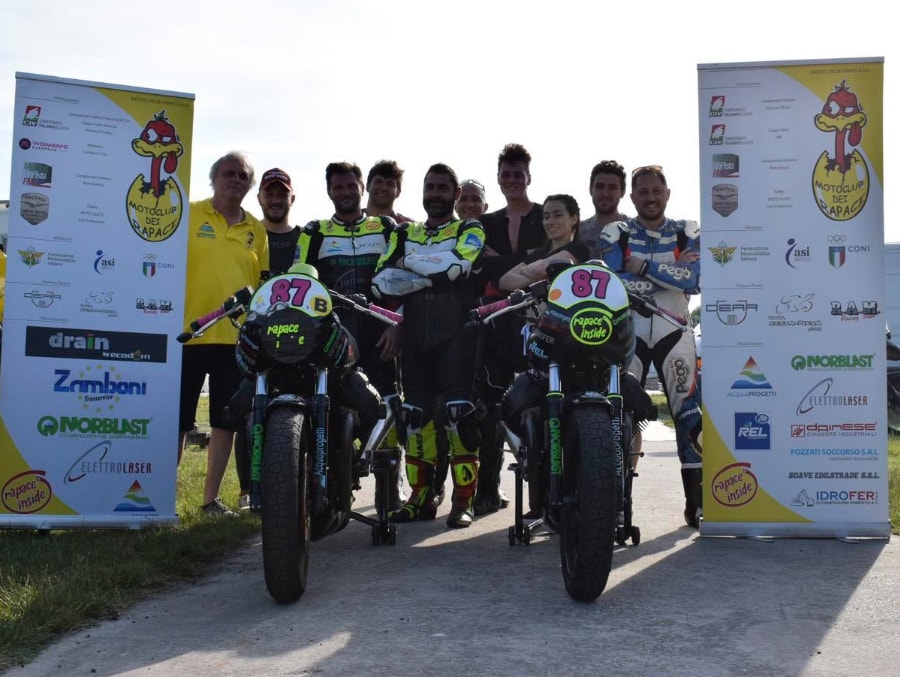 The comeback ride by expert journalists and testers Stefano Cordara and Marco Selvetti was incredible, participating as special guests. Hindered on the first lap by a problem with the shift lever - solved straight away with a pit stop - they fought their way up from the back of the group all the way to sixth place.
The overall Cup standings are now extremely close. Exploiting the “zero” by team VMS Benty 2, who did a double win in Varano but were hindered in Vallelunga by problems at the start, Team Pablo moves into the lead with 47 points ahead of none other than VMS Benty 2, who remain at 40, and Guaracing Factory Team 1 who are now at 37. 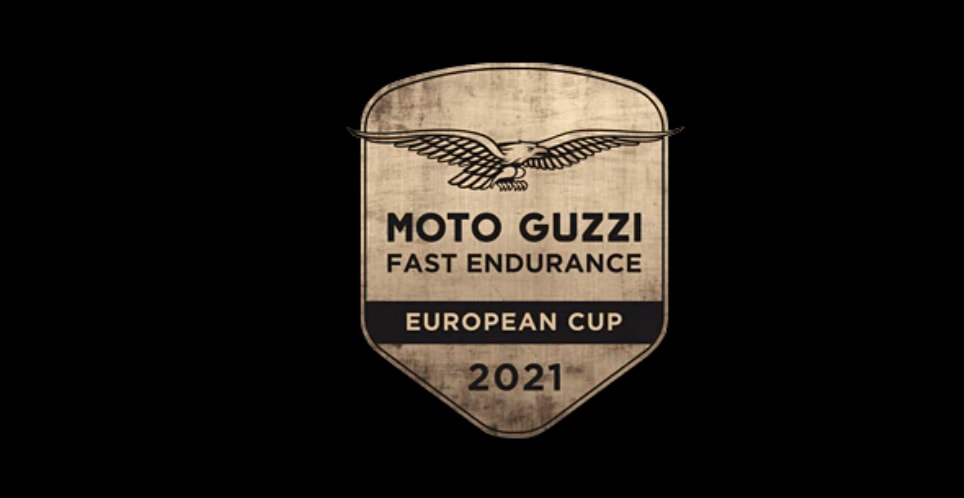 To stay up to date on all the news and on how you can participate in the 2021 Moto Guzzi Fast Endurance European Cup, check out www.motoguzzi.com  and the Federazione Motociclistica Italiana (Italian Motorcycle Federation) website www.federmoto.it 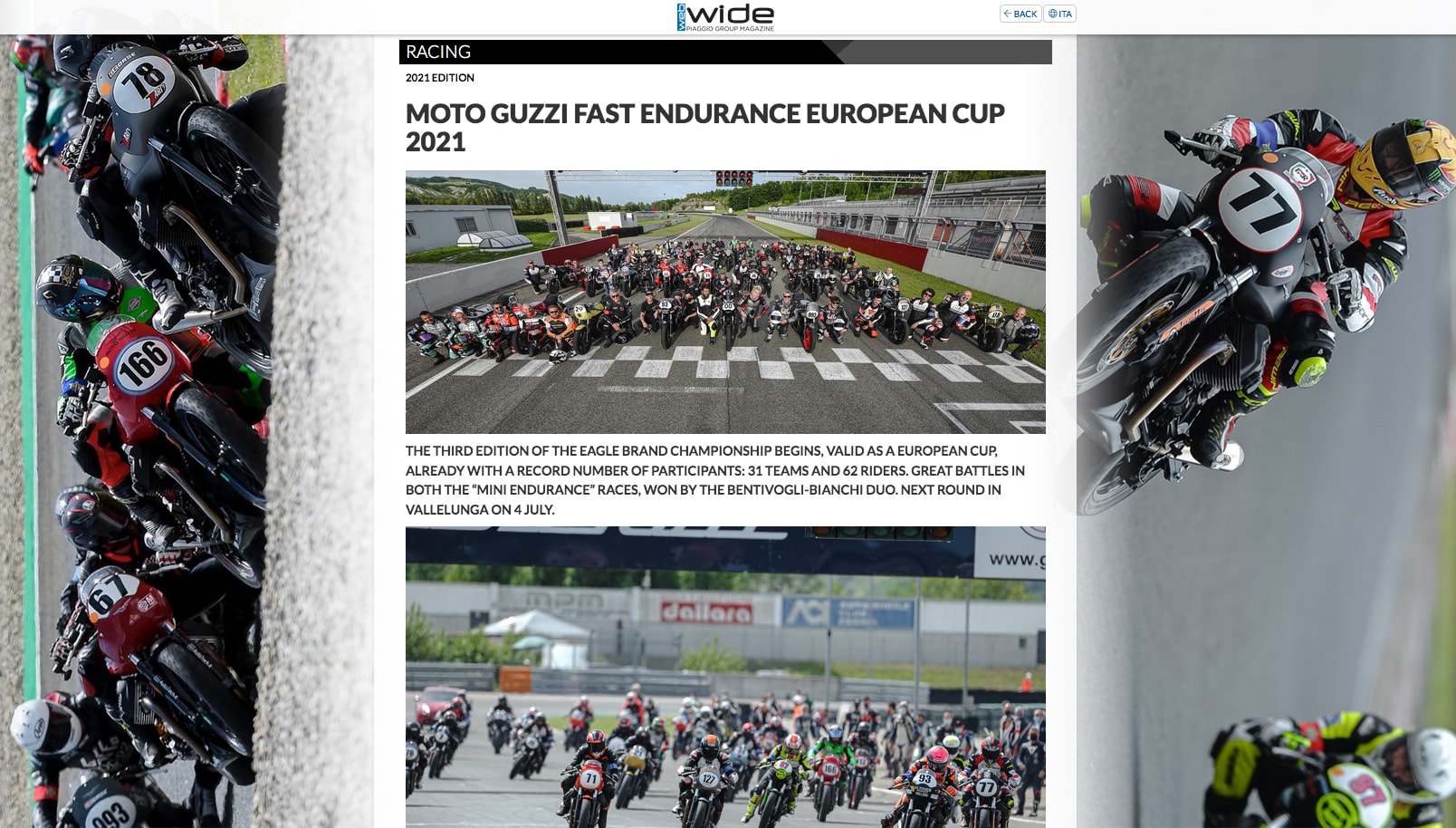