ASTRIDE HIS MOTO GUZZI LE MANS: THIS IS HOW CHRIS SET OUT TO DISCOVER THE WORLD AND HIMSELF 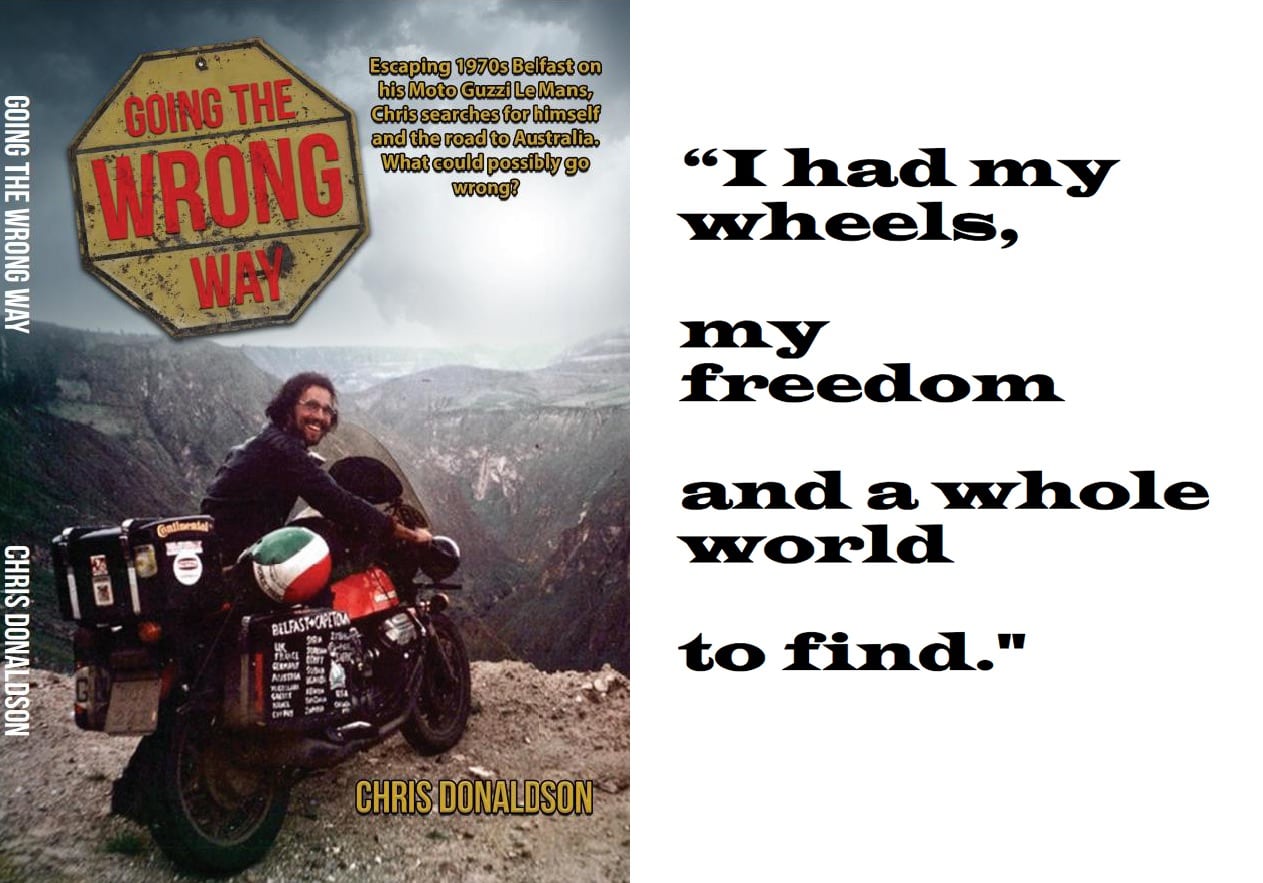 THE EXTRAORDINARY ADVENTURE OF CHRIS DONALDSON – A GREAT MOTORBIKE “ESCAPE” FROM NINETEEN SEVENTIES BELFAST (IRELAND) ACROSS 33 COUNTRIES – TURNED INTO A BOOK ENTITLED “GOING THE WRONG WAY”. A SINCERE AND PASSIONATE TALE THAT THRILLS AND ASTONISHES. DEDICATED TO GUZZI FANS OLD AND NEW. HERE IS THE LINK TO THE FIRST CHAPTER. AND THE INTERVIEW WITH THE AUTHOR, A GENUINE GUZZI FAN, WHO DREAMS OF AUSTRALIA. 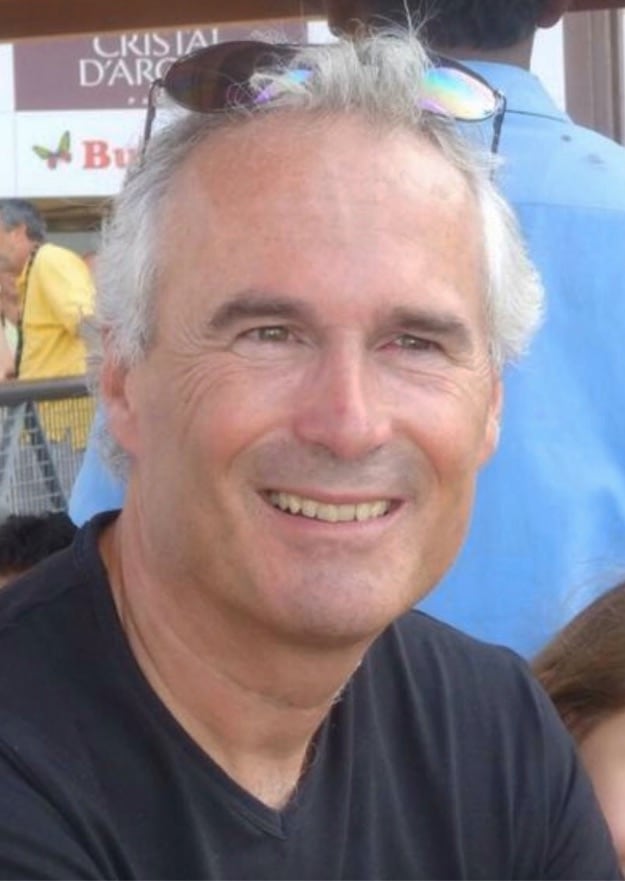 May 2020 – Chris Donaldson lives in Ballygally, Northern Ireland, originally from Belfast. When he wrote to Wide magazine some time ago, he recounted: “In the 1979-1980 period, I rode my Moto Guzzi Le Mans 850 Mk1 through the Middle East, Africa and from Canada to Argentina. Later, I rode all the way to St. Petersburg, Moscow and back. I am writing a book about my motorbike adventures and I realised that the new Moto Guzzi V85 TT would be perfect for these trips. And – he added – I still have my Le Mans!” Then Chris announced that he had finished his book (a job that took a year to complete) and he admits that he would like to make it available to Guzzi fans (also proposing promotional initiatives at dealerships, which could offer it to their customers, this is his idea... and he is also thinking of supporting charity initiatives with part of the book sale proceeds, as well as publishing an edition in Italian...).

And, on the occasion of the publishing of his book – available in eBook format on Amazon – he has also launched a website where you can download the first chapter: www.chrisdonaldson.world. 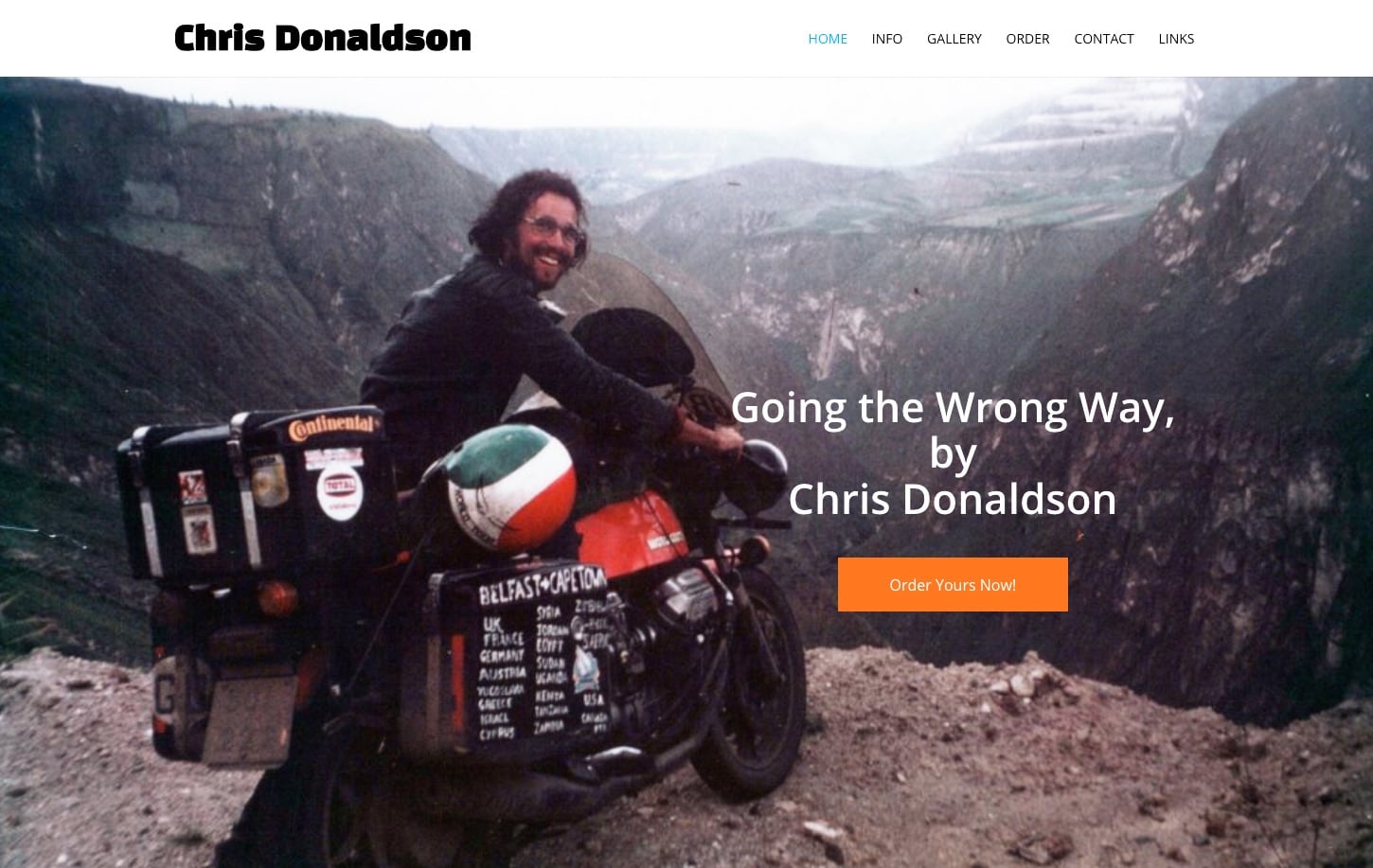 FROM THE FOREWORD OF THE BOOK. WHEN THE VOYAGE IS A LIFE LESSON. “Since the Stone Age, the walkabout has been an Aboriginal rite of passage. It is when adolescent boys wander aimlessly into the bush on a journey with no particular destination. During this time, they make the spiritual transition from boy to man. It’s a time for self-assessment and deep thought, when he can learn about himself without the influence of his elders, friends, or family. It’s a physical and psychological journey. I didn’t look like an Aboriginal adolescent as I set off from Belfast on my café racing Moto Guzzi, but looking back, I see that the same determination drove me to set off on a journey of self-discovery. I was twenty-one and, wanted to go ‘somewhere’ for ‘some time’ and, well, for ‘something’!
This desire drove me to break free from my mediocre, middle-class existence and reach out for the unknown. The demand was irresistible and bound me to an ancient ritual that many young men before me had taken for adventure. 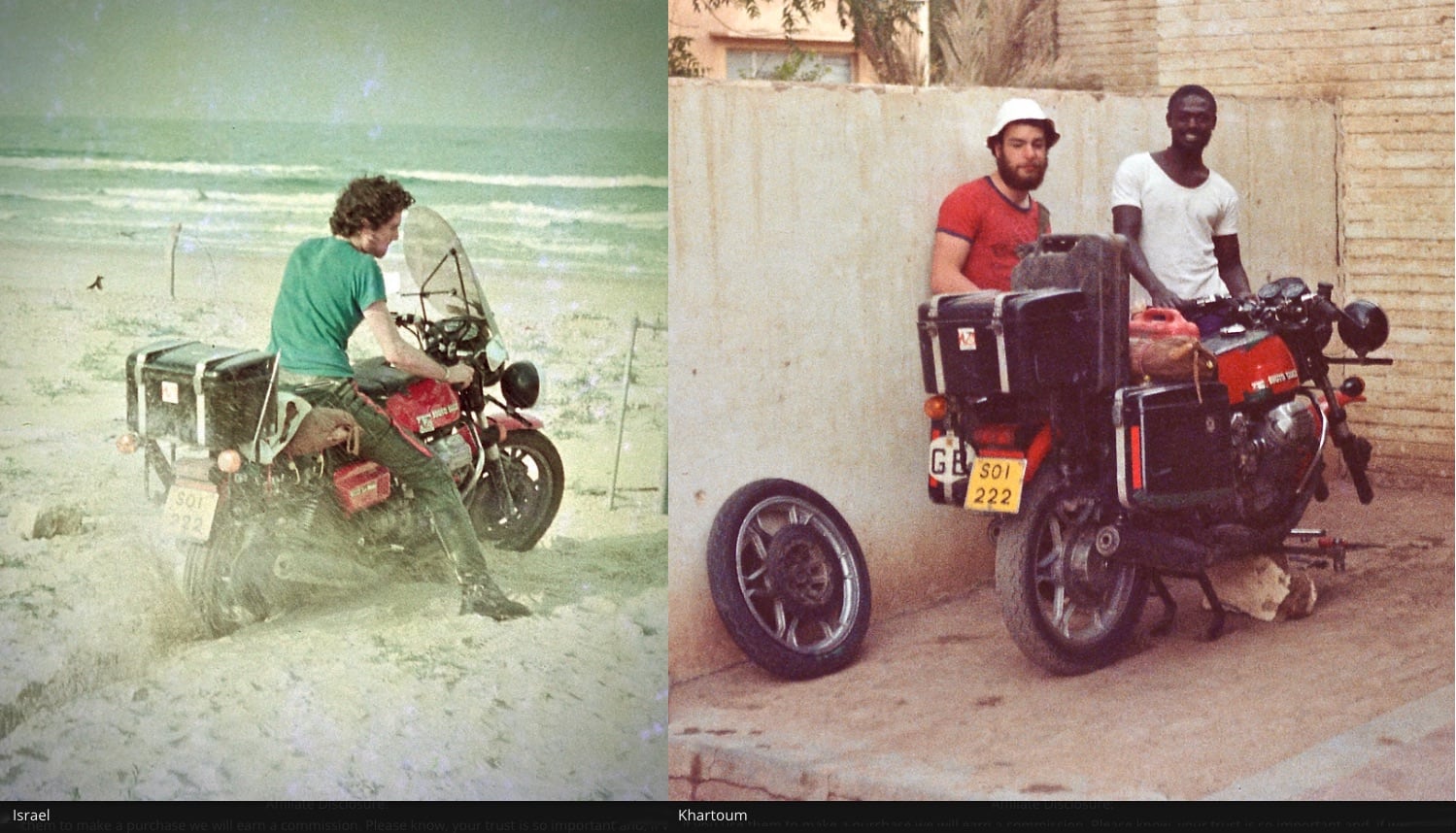 Come with Chris Donaldson on this roller coaster 'ride' of self-discovery and you will not be disappointed as there is a near-death experience around every corner! 40,000 plus miles (not counting 10,000 more crewing on an ocean-going racing yacht) through 33 countries there are enough harum-scarum life lessons to keep you turning those pages.
All  along the way there are formidable road blocks: Trigger happy boy soldiers with AK-47s in war-torn Africa, the Sahara Desert, The Andes, waves the size of Everest that threaten to sweep him over-board, hepatitis E in south America and  PTSD when he got home -  and that's only the half of it.
This odyssey, seen through the eyes of someone in their early twenties fresh for the Belfast Troubles and lived out in the early 1980s, is raw in its exposure but thoughtful in its deliberations and revealing about the regimes and cultures it passes through.” 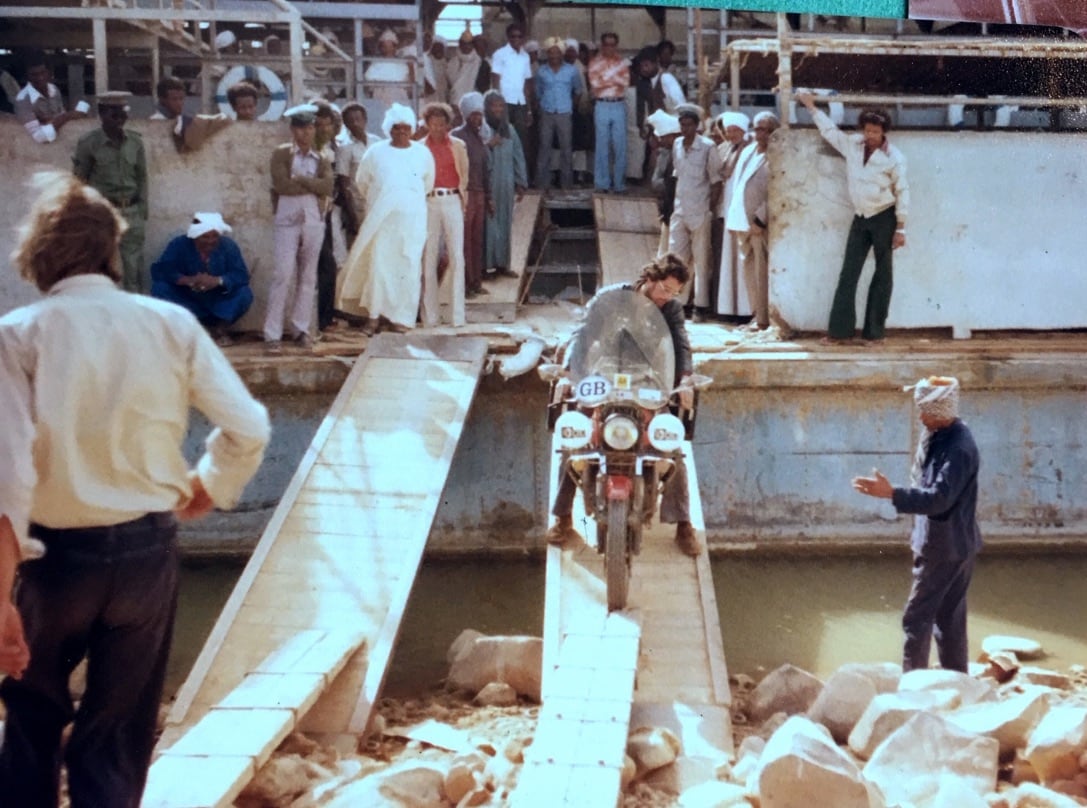 THE BOOK, THE REVIEWS. Chris Donaldson’s book – Kindle Edition, 379 pages, first edition 23 April 2020, in English – has already earned a 5-star rating on Amazon, www.amazon.co.uk/dp/B0877CVF52 thanks to the glowing customer reviews: “A great read, in turns funny, terrifying, gripping and inspirational... it deserves to become a classic.", Geoff Hill - Author, Adventurer and journalist for Sunday Times. "In 1979 Chris leaves the Belfast Troubles behind and creates his own trouble in an accidental journey around the world. It’s a wild ride but Chris tells a cracking yarn that will keep you going to the bitter-sweet end.", Ted Simon, Author Jupiters Travels. "The journey is a breath holding adventure that has you gripped before he leaves Belfast! Chris took us on a ride where Bond meets Jones meets Dundee and leaves them all in his wake. We all long for such adventure but very few have a set big enough!”, Penelope MdKeagu. There was also a nice article in the UK Superbike Magazine. Here are a few images, the map with the blue line that shows the route Chris followed and the cover of a ‘70s era Moto Guzzi catalogue dedicated to the 850 Le Mans Mk1.

The book – which also contains the author’s biography – unfolds through exciting chapters, describing some extremely difficult times and thrilling times, all written in engaging novel format. It is easy for the reader to identify with the courageous and somewhat wild Irish biker through Israel and Cyprus, Syria and Jordan, Egypt and the Nubian Desert, the Sudan, Uganda and Kenya, Tanzania and Zambia, Rhodesia and South Africa, crossing the Atlantic to land in North America, travelling south through Central America, Columbia and Ecuador, Peru and Bolivia, Argentina and Brazil…
Chris reveals: “I would love to have Ewan McGregor would read my book. I’d be honoured to have the opinion of a biker like him!”

THE INTERVIEW WITH CHRIS DONALDSON.
When was your passion for the very Italian Moto Guzzi bikes born?
I saw the Le Mans in a shop window and took a test drive. When I felt the throb of the V twin, I was hooked. My bike became, and continues to be, a MG Le Mans Mk1 850cc.”
What do you love in particular about Moto Guzzis?
Italian style; Quality engineering; Speed and handling I had had Nortons and BMW before. The Guzzi seemed to combine the best of both, without the worst bits of each.
Give us a summary of the trips you've made on your Moto Guzzi.
1978, France and Spain. 1979-1981, World tour. 2008, from Belfast to St. Petersburg and Moscow.
The trip you are still dreaming of...
Ha! Maybe Australia!
How did the idea of writing a book come about?
I had always planned to write a book about it, but life kept getting in the way. But now I've done it.
Who do you want to dedicate it to?
My wife, Julie who helped me enormously with the writing and had to listen to endless tales from my past.
REMEMBERING FRIEND AND CHAMPION STANLEY WOODS.
Last, but not least, remembering friend and Irish champion, Stanley Woods is important to Chris. Stanley was 10-time winner of the Isle of Man TT, twice with Moto Guzzi bikes in 1935. An extraordinary figure who passed away in 1993. And Chris pulls a photo out of his private album of Stanley, pictured alongside the numerous trophies he had earned in dozens of competitions (29 GP races won in the ‘20s and ‘30s). We’ll add another of him, racing on a Moto Guzzi.