FROM MANAGER AND ENTREPRENEUR TO GLOBETROTTER: GIANLUCA PELLEGRINELLI TALKS ABOUT HIS BOOK “NEPAL BY VESPA – IT’S NEVER TOO LATE TO CHANGE YOUR LIFE” 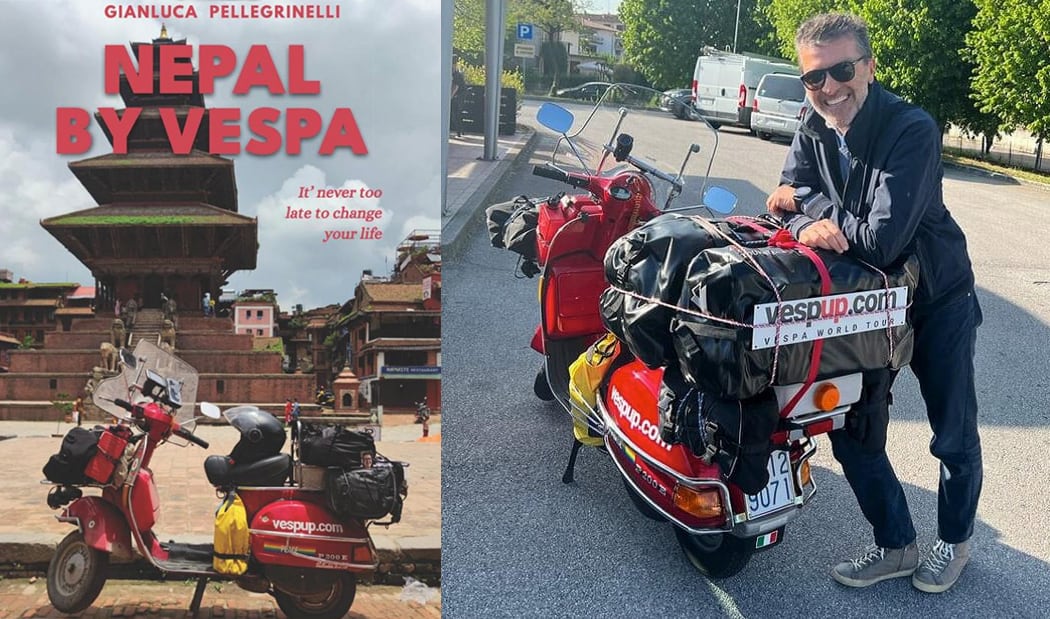 On the left, cover of Gianluca Pellegrinelli’s book (photo courtesy of the author) and with his Vespa P200 E in the photo on the right.

BETWEEN MAY AND JULY, HE COMPLETED A SOLO RIDE TO DISCOVER AND BE DISCOVERED, RIDING THROUGH EASTERN EUROPE, TURKEY, IRAN, PAKISTAN, AND INDIA FOR A TOTAL OF 11,500 KM. AND A NEW TRIP WILL TAKE HIM TO AFRICA, FROM ITALY TO GHANA, FOR A VOLUNTEER HUMANITARIAN INITIATIVE IN FAVOUR OF THE “IN MY FATHER’S HOUSE” ASSOCIATION. ONCE AGAIN ASTRIDE HIS VESPA, ADVENTURE AND DISCOVERY COMPANION.

English translation. Rai 3, Italian national channel television. “Give me my life back”. He said goodbye to work and left to see the world by Vespa. “For me, Vespa was a change, it was freedom.” His name is Gianluca Pellegrinelli, he’s 58 years old and he lives in Conegliano - province of Treviso (Italy’s Veneto region, ndr). His is a story of a revolutionised existence, a decision as radical as it is courageous: to leave everything - work, money, position - for his Vespa. “My story is the same as many. I worked for 35 years, starting out in sales and working my way up to becoming a CEO. I opened my companies, accomplished many things, and then, 10 years from my pension, I realised that I wasn’t happy.” What was wrong with the life you were living? “Work was stressful, and I realised that I was wasting the most important thing I had: my time. So, I decided not to wait for my pension and to stop working for a certain period. In other words, I decided to dedicate my time to my passions, which were travel and Vespa. I began making arrangements for a trip, from Italy to Nepal, all by land, alone, with this Vespa 200.” How did it go? “I learned many things. This type of experience was very demanding. With all the pleasures and the difficulties that this type of trip had in store, it was extremely liberating for me.” Weren’t you afraid? “My fear was leaving everything, because after 35 years of work, accustomed to having a salary, finding yourself at a certain point where there is no more income and having to make do with what I had, I did have a moment of fear.” And now how do you make a living? “I had some savings set aside, I reduced my consumption a lot, and I try to make do with what I have. I’ll obviously have to go back to work, but I’ll work in a different way.” How is that? “I’ll do just as much work as is necessary to have what I need to live.” You have two children. What did they have to say about all this? “I must say that my children supported me very much. They are probably quite a lot like me, and I wouldn’t be surprised if, in a few years, they were to make this type of choice as well.” Will you leave again? “On 22 October, I’ll leave for a 20-thousand-kilometre trip, all by land, from here to Ghana, also carrying out a volunteer operation with a mission.” You gave up your job, economic security, and stability. How do you see your future? “I live every day as if it were my last, so I don’t live anticipating something, anticipating going on holiday, retiring, or for the weekend to arrive. I live today as if it were my last day, so I live well. Therefore, my future can only be rosy.”

October 2022 – Gianluca Pellegrinelli, manager and entrepreneur from Veneto, of the Vespa Club Conegliano (Treviso), truly made a life change this year. With a healthy pinch of recklessness that “affects” all true travellers, last spring he acquired a shiny Vespa P200 E, outfitting it for a ride that he planned out in detail, and set out on the ambitious adventure of a solo world tour. Perhaps a bit too ambitious, he thought at a certain point of the trip (taxing, of course, on the wallet and because of the psychological/physical challenge). So, after 11,500 km, from Italy to Nepal, passing through Eastern European countries, Turkey, Iran, Pakistan, and India, “with average riding times between 6 and 10 hours,” Gianluca Pellegrinelli returned home in July. 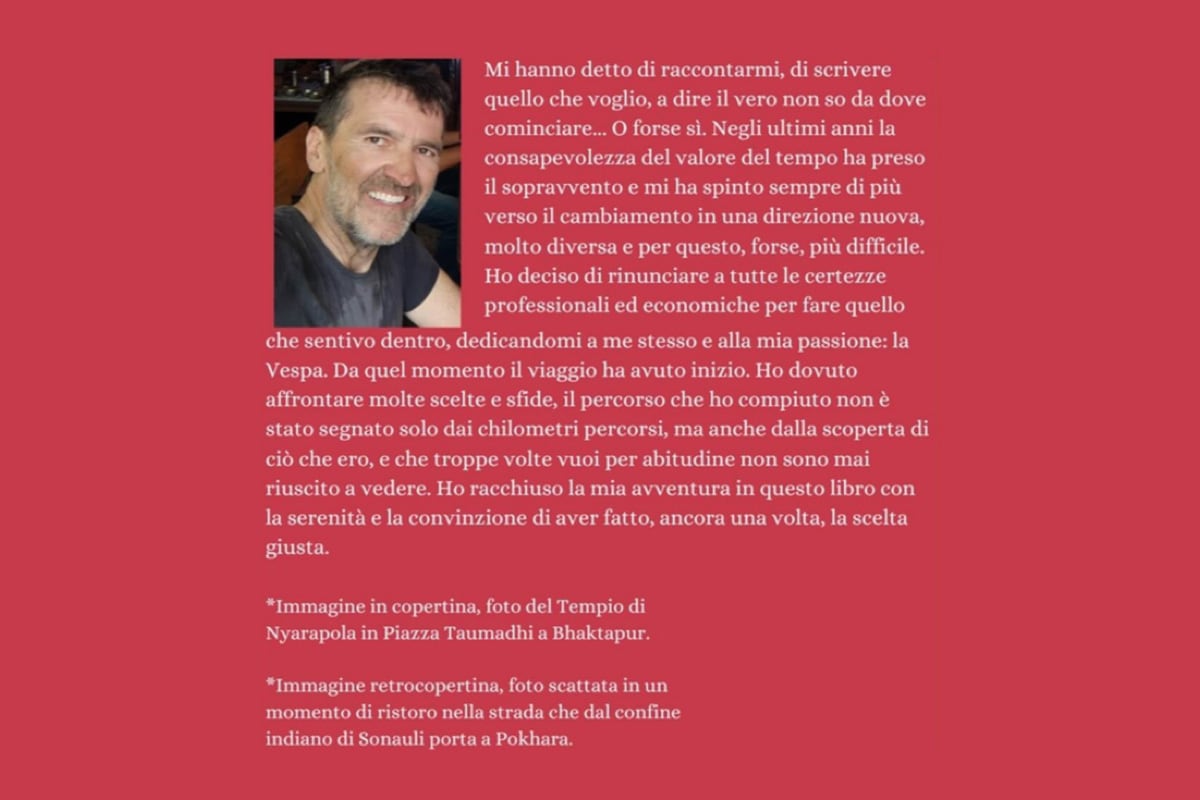 Back cover of Gianluca Pellegrinelli’s book, photo courtesy of the author.

English translation: “They told me to tell me, to write what I want, to be honest I don't know where to start ... or maybe yes. In recent years, the awareness of the value of time has taken over and pushed me more and more towards change in a new direction, very different and for this reason, perhaps, more difficult. I decided to give up all professional and economic certainties to do what I felt inside, dedicating myself to myself and my passion: the Vespa. From that moment the journey began. I had to face many choices and challenges, the path I have traveled has not been marked only by the kilometers traveled, but also by the discovery of what I was, and that too many times, even out of habit. I never got to see. I have enclosed my adventure in this book with serenity and the conviction of having made, once again, the right choice. * Cover image, photo of Nyarapola Temple in Taumadhi Square in Bhaktapur. * Back cover image, photo taken in a moment of refreshment on the road that leads from the Indian border of Sonauli to Pokhara.

I GIVE VALUE TO THE MOST VALUABLE THING
I OWN - MY TIME -
AS IF EACH DAY WERE MY LAST .
GIANLUCA PELLEGRINELLI.

And - surprise! His Vespa adventure attracted attention, first from local press and then the national media, interviewed by newspapers and TV stations. And, given the great interest generated by his undertaking and in order to keep his experience from dissipating, the traveller-Vespista authored a book – “Nepal by Vespa”, with the subtitle “It’s never too late to change your life,” fresh off the press (even in an English language edition) and presented to the public in his native Conegliano and in Verona, between September and October.

The book tells of his extraordinary trip, between unforgettable encounters and fascinating places, between difficulties and bureaucratic hurdles, between unexpected support (including from Vespa clubs in Iran and Pakistan) and an abundance of emotion. The publication, enriched by more than 150 colour photographs of his trip, “boasts” prestigious introductions: by Pio Dal Cin, photographer and writer, who highlights Gianluca’s courage in taking control of his life at 58 years old and changing it with passionate clarity; by Riccardo Costagliola, Chairman of the Piaggio Foundation, who mentions the Vespa 150 S (on display in the Piaggio Museum in Pontedera, Tuscany) that belonged to two young Spaniards (1962, about to depart for a trip around the world in less than 80 days) and which Salvador Dalì signed, as a symbol of the desire to escape from the daily grind and discover new horizons to find oneself and the essence of one’s life; by Mauro Calestrini, President of the Vespa World Club, who talks about how Gianluca’s experience shows that you can truly change your life if you really want to and succeed with your own actions, with consistency and willingness.

Source of images and info “Vespup for Africa”: vespup.com/en/vespup-for-africa
Info on mission to Abor, Ghana: www.casapadremio.org

Sharing the experience to reflect, and to make others reflect, on the meaning of one’s life and on how to improve it, even helping one another, is at the root of Gianluca’s intentions, who has already embarked on a new undertaking: VESPUP FOR AFRICA, “born out of my idea,” Gianluca explains, “combines a new solo trip by Vespa, from Italy to Ghana, with a volunteer humanitarian operation in favour of the In My Father’s House Association (founded 40 years ago in Abor, three hours by car from the capital city of Accra), managed by Father Giuseppe Rabbiosi, which gives young people the opportunity to study, from nursery school through professional schools. The goal is to raise funds to complete further development projects for the mission and the villages in the area.” Good luck, Gianluca. May the road be with you!

Photo courtesy of the author.

In August 2022, Pellegrinelli also completed a tour of Italy by Vespa: 3,000 km from Stelvio to Gallipoli on the way and another 2,500 km from Gallipoli to Cortina d’Ampezzo. In the photos above, Gianluca Pellegrinelli and his Vespa P200 E during the Tuscan stop to visit the Piaggio Museum in Pontedera. vespup.com/en/travelogue-travel-journey-italia-in-vespa

When we asked him why he had chosen this “glorious” Vespa model, Gianluca revealed that he would have chosen a modern Vespa - maybe a GT - for his ride but, thinking that maintenance would be simpler during the long trip to non-Western countries, he preferred a “vintage” model. He later discovered that he would have been able to count on the vast Vespa service network all around the world anyway, not to mention the Vespisti from all the worldwide clubs. And, commenting on the recent international launch of the new Vespa GTS, he says he’s enthusiastic about the new model.

ABOUT THE BOOK “NEPAL BY VESPA” BY GIANLUCA PELLEGRINELLI:
vespup.com/amzn.to/3rjiZc3 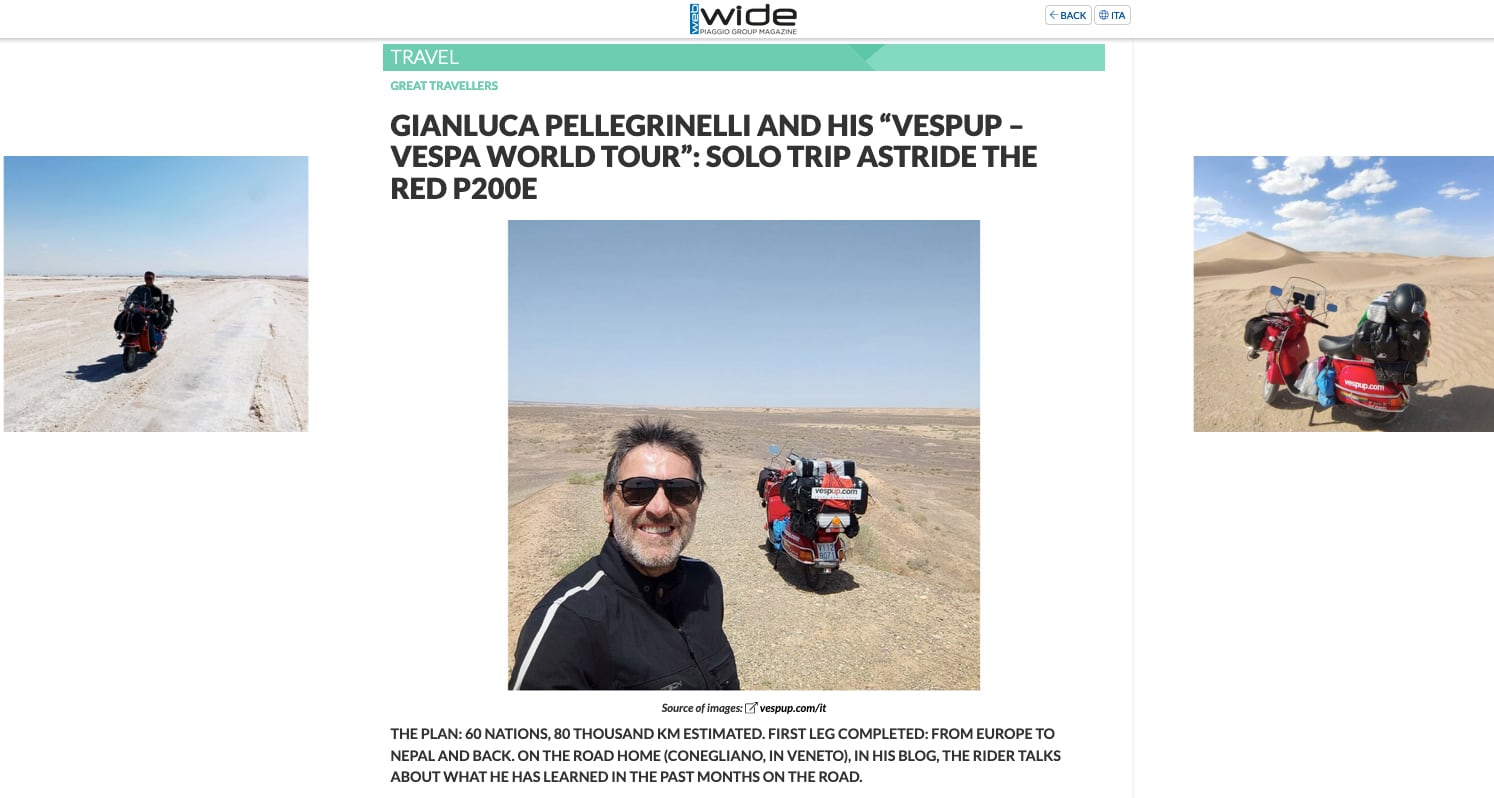