ADVENTURE ON THE ROAD

ILARIO LAVARRA, VESPA RECORD HOLDER: 145 THOUSAND KM AROUND THE WORLD ACROSS 89 COUNTRIES. ASTRIDE HIS “ARDIMENTOSA” HE REACHES A HISTORIC MILESTONE 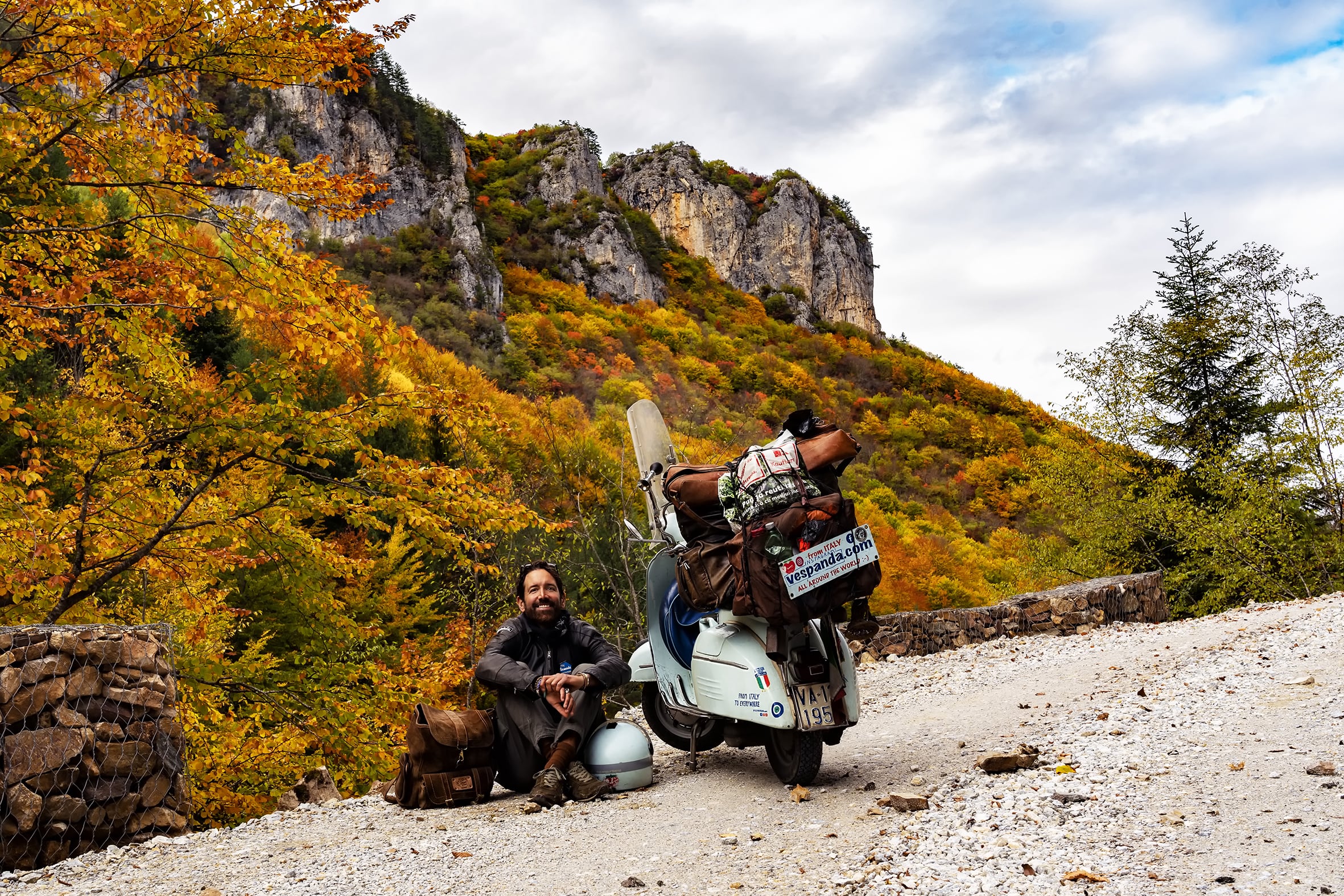 TRAVELLER AND WRITER, FOR OVER 4 YEARS HE HAS BEEN ON HIS “VESPANDA – LE GRAND TOUR” TRIP AS A WORTHY FOLLOWER OF GIORGIO BETTINELLI, ILARIO HAS SURPASSED THE MASTER WHO, DURING HIS “WORLDWIDE ODYSSEY” (1997-2001), TRAVELLED 144 THOUSAND KM. THIS PLACES LAVARRA IN THE HALL OF FAME OF GREAT VESPISTI. AND THE NON-STOP VOYAGE CONTINUES. HERE IS THE INTERVIEW, TO FIND OUT WHERE HE IS NOW…

18 November 2021 – We received the E-mail on 9 November: “My name is Ilario Lavarra, long-time Vespista on a non-stop solo trip around the world for over 4 years on a 1968 Vespa GT. I wanted to let you know that a few days ago I crossed the threshold of 145,000 km (and 89 nations). This is a rather big little milestone, worthy of Guinness! Since no Vespa, or other scooter, until now had ever actually achieved such significant mileage in a single trip around the world (and probably never any Italian on 2 wheels in general).”
Congratulations to super Vespista globetrotter and writer, Milan native Ilario Lavarra, 39 years old, still on his “Vespanda - Le Grand tour” trip around the world astride his light blue vintage Vespa called “Ardimentosa”. 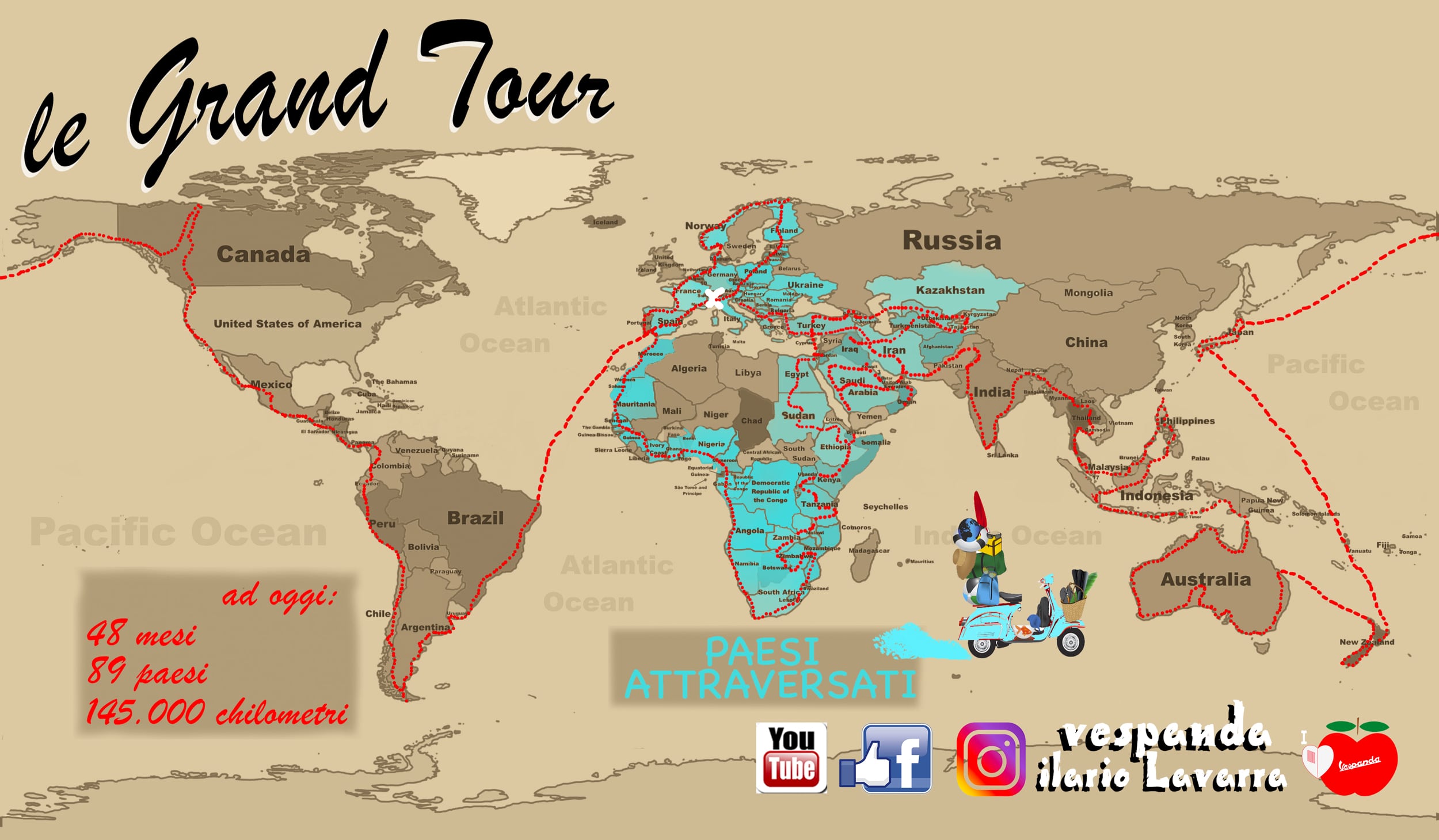 And Ilario has truly reached a historic milestone on Vespa’s 75th anniversary: he has racked up the highest mileage on a single trip around the world. In fact, the great and unforgotten Giorgio Bettinelli, on his longest voyage – Worldwide Odyssey, 1997-2001 – travelled 144 thousand km and, summing his 5 most important trips, “bequeaths” almost 300 thousand km travelled and over 135 countries visited. And still, Lavarra’s travels continue, in the wake of the “master”, on a constant quest to discover the world and to surpass his own milestone and set more records… Good luck!

On his exceptional ride on the road, Ilario has so far met the Prince of Saudi Arabia and been applauded by the teams competing in the Paris-Dakar. He was the first to take a Vespa to the Unesco site of Mad’In Salih… and he has had dozens of other extraordinary meetings - an incredible life of adventures. 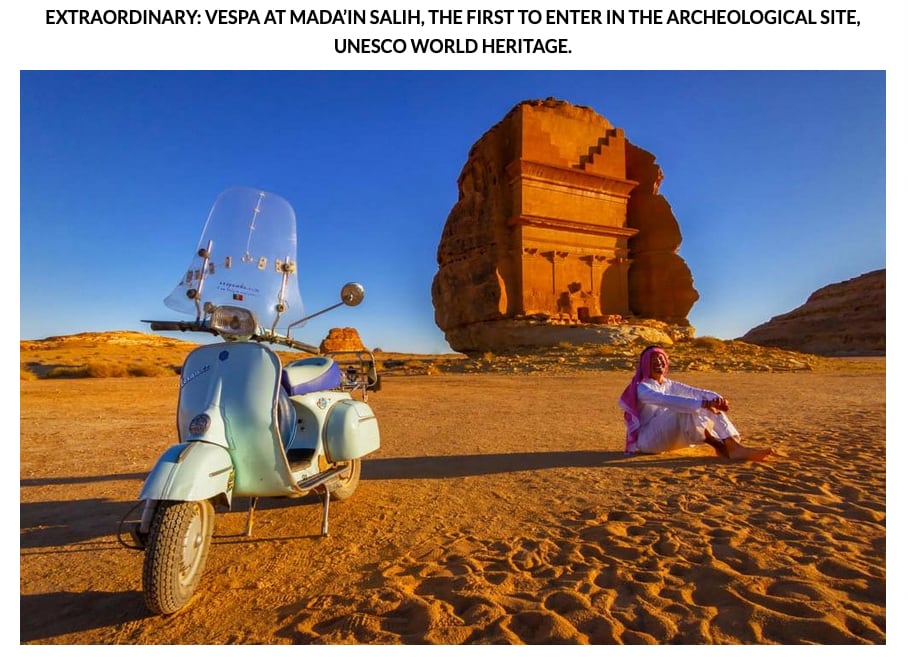 Interviewed by newspapers and TV stations around the world, he manages to find support and friendship, thanks in part to the vast global network of Vespa importers, dealers, and enthusiasts.

Ilario, where are you now?
“I'm in Bulgaria now, the last country on my mini tour of the Balkans and Eastern Europe… in a few days I’ll go back to Turkey where I’ll winter, like I did last year. And who knows when I’ll set foot in Europe again... because the plan now is to head towards Australia… that is, after Turkey, go back to Iran, then Pakistan, India, etc… hopefully the borders will reopen soon.” 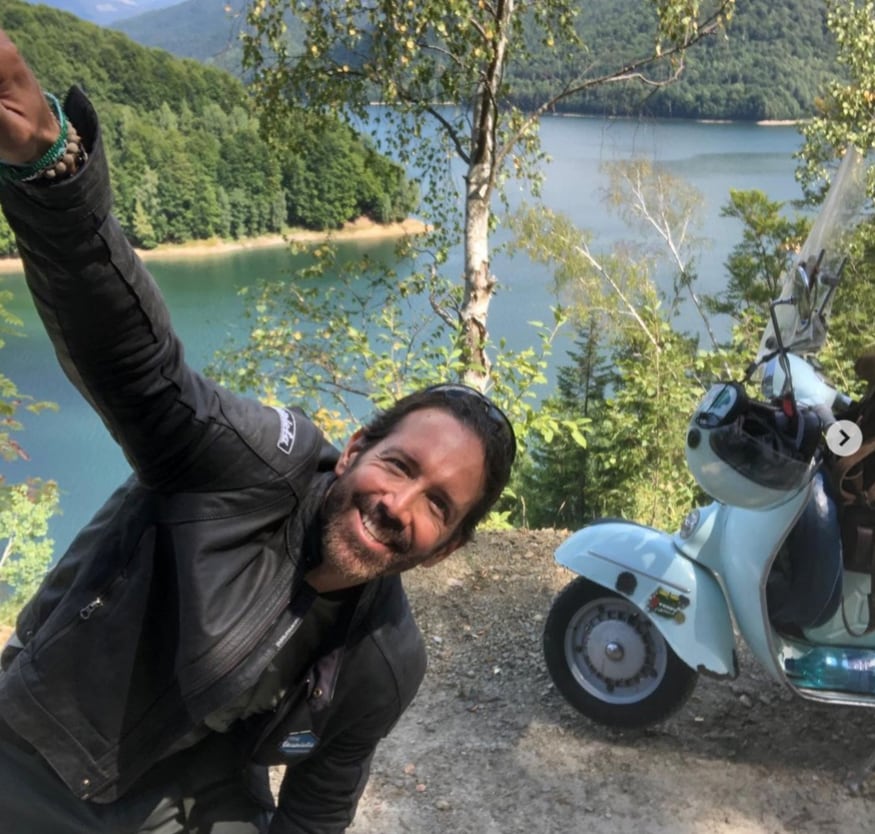 So far, you have crossed through 89 countries. Which are you missing to complete the grand tour?
“I'm missing all of East Asia and America.”
You left Milan over 4 years ago in September 2017. When do you expect to finish your ride on the road?
“I have absolutely no idea… it was supposed to be over months ago… but Covid threw a spanner in the works. If the world goes back to normal next year, I’d say a couple more years. But by now, I just go with the flow…”

145.000 KM AROUND THE WORLD
LONGEST JOURNEY EVER BY SCOOTER

What were some of the most exciting and most difficult times you have faced so far?
“There are many on both sides… just to name a few, I'd say some of the exciting times: participating in the Dakar, travelling with the Vespa in remote countries like those in Central Asia (Tajikistan, Afghanistan, Kyrgyzstan), or managing to do all of Africa, or this summer when I travelled for a few days with Franco and Andrea (an autistic boy), or surpassing the 145,000 km mark; o every single day when I get out of bed where I want to be… Difficult moments: well, besides various illnesses (typhoid, malaria, etc.), I’d say the borders closing due to Covid (which actually turned out to be an opportunity to get to know certain countries better), some times of mourning that I experienced alone and far from Italy.” 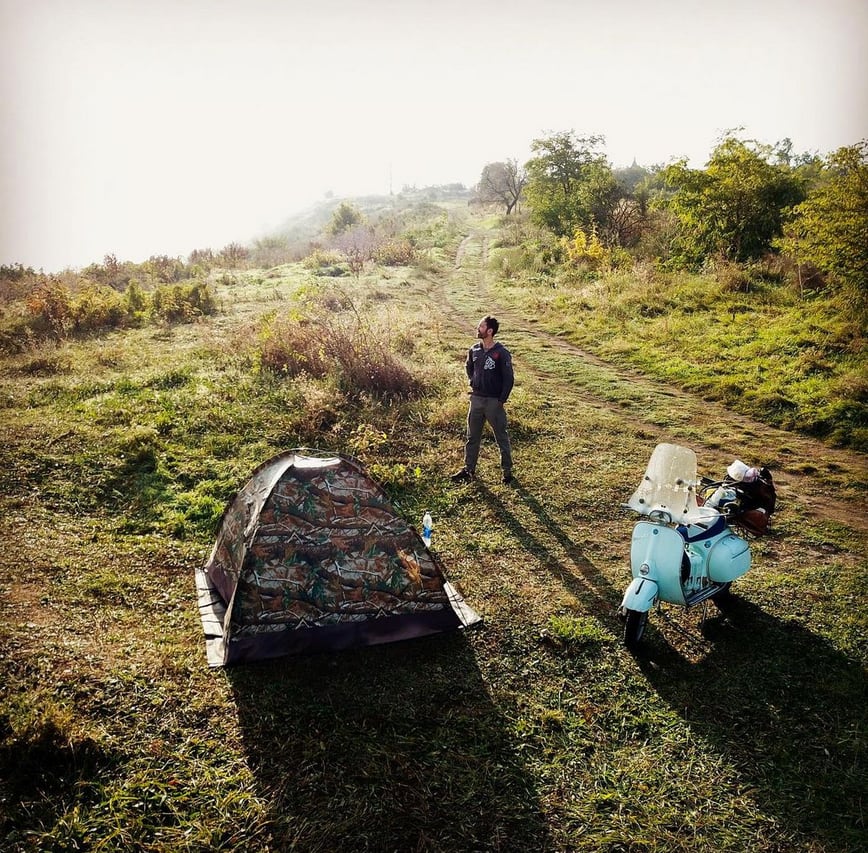 What have you learned from this extraordinary life experience?
“To be less afraid of my surroundings, because the media often seeks out ‘the news’ painting the world in dark colours… but in all reality, the world is made up of people and humankind, the individual, is by nature good. Or at least that’s what I’ve learned so far.”
Courage, an open mind, a great ability to adapt: all this and much more. Ilario and his Vespa, without frontiers.

10 YEARS AGO… FROM THE ARCTIC TO THE ANTARCTIC, “VESPACROSSING THE AMERICAN CONTINENT” .His previous super voyage, just a decade ago: from the Arctic to the Antarctic, more than 80 thousand km in 18 months with another vintage Vespa vintage called “Corazzata” (now on display at the Piaggio Museum in the area dedicated to great voyages, next to Giorgio Bettinelli’s Vespa). Another solo trip that Lavarra has described in his books, “21 Americhe” (21 Americas) and its counterpart, “Attraverspando le 21 Americhe” (Vespacrossing the 21 Americas). That’s not a type – attraverspando –but Ilario’s “neologism”, namely: crossing the world on a Vespa! 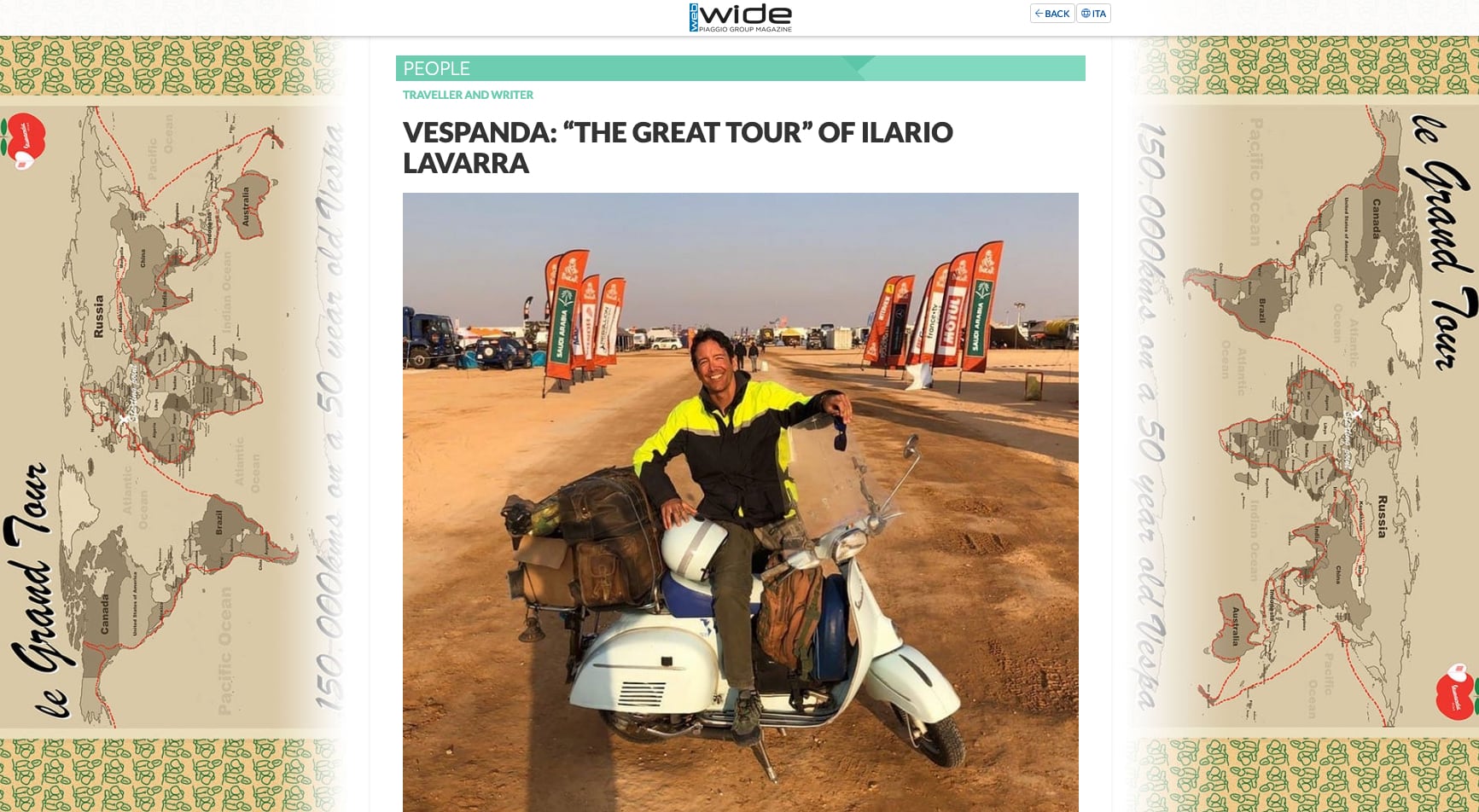