WESTERN SICILY… ON THE ROAD

April 2022 – From the largest Italian land art of the Great Crack to the archaeological park of Selinunte, from the Monte Cofano natural reserve to the Marsala salt pans, going from the beaches of Macari to the Trapani seafront. Western Sicily, majestic, fascinating, and mysterious, was the “theatre” of the new Moto Guzzi video dedicated to the 2022 range of the V85 TT classic enduro. It was an itinerant shooting, with V85 TT and V85 TT Travel as protagonists, which went through a large part of Western Sicily, attracting the attention of the press, which dedicated articles and coverage to it. The crew was made up of about 25 people, including photographers from the Milagro studio, video operators, director, and director of photography, coordinated by the Controcampo production house, a few riders, and the models hired for the project. And here is the result.

The Moto Guzzi V85 TT was a perfect travelling companion, tackling any road: from the daily commute to adventurous trips, guaranteeing comfort, performance, and... genuine thrills. The locations in the new Moto Guzzi video are also an original proposal for a motorcycle road trip itinerary, which we’ll tell you about in these images, stop by stop. You swing a leg over your V85 TT and you’re off, ready to follow the roads of the Moto Guzzi troupe and enjoy the unexpected. 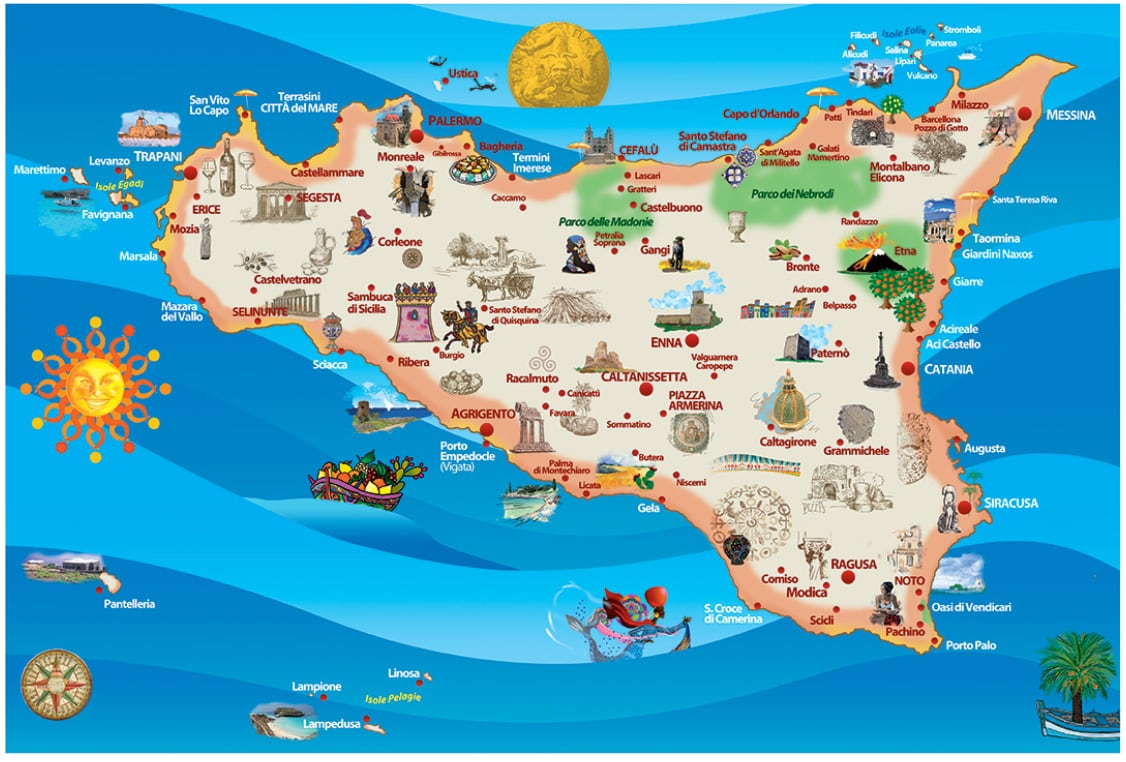 THE GREAT CRACK.
A CONTEMPORARY WORK OF ART - ONE OF THE LARGEST IN THE WORLD.

The Cretto di Burri, or the cretto di Gibellina is the name by which the Great Crack is known, a work of land art created by Alberto Burri in the eighties in the place where the old city of Gibellina stood, completely destroyed by the 1968 Belice earthquake.

We went to Gibellina... I was truly struck by it. I was moved almost to tears straight away and the idea came to me: I feel like I could do something here. I would do something. We compacted the rubble, which is such a problem for everyone, we reinforced it well, and with concrete we made a huge white crack, so that it would be a constant reminder of this event.
ALBERTO BURRI. 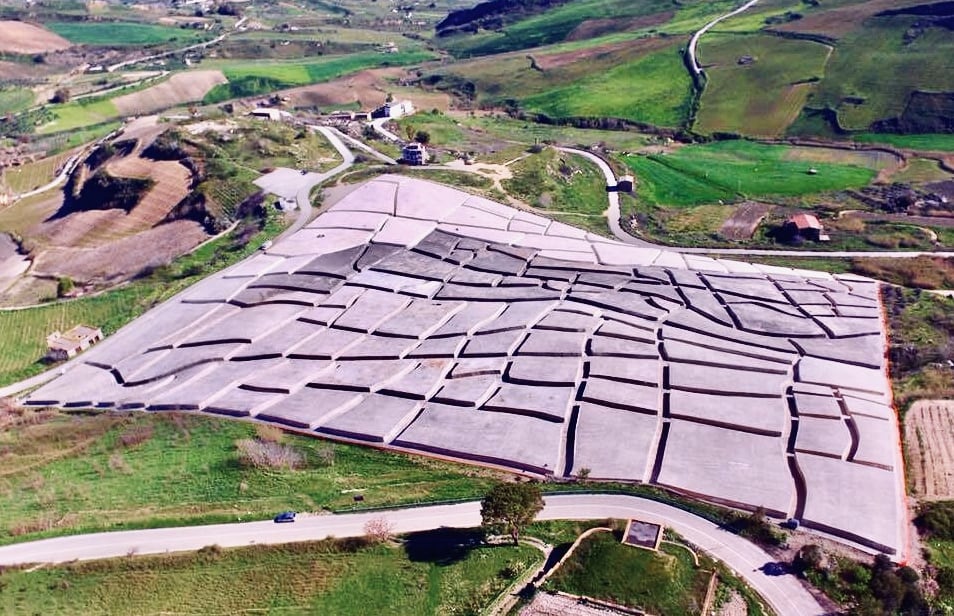 The town’s desire for rebirth saw art as social redemption. Of all the numerous artists who came to a city free of charge, the name Burri stands out. He designed a huge monument that traces the streets and alleys of the old city. In fact, it is in the same place where the ruins once were. The blocks were made by collecting and enclosing the rubble of the buildings themselves.

SELINUNTE PARK.
ONE OF THE LARGEST ARCHAEOLOGICAL AREAS IN EUROPE.

Myth, legend, history, and culture are intertwined here. The Selinunte Park is a showcase of the treasure, still alive and thousands of years old. 270 hectares that tell the story of the most flourishing classic civilisations of the Mediterranean region (Selinunte was founded in 650 B.C. and was one of the most important Greek colonies in Sicily).

A rich history still being discovered, popular with tourists and travellers, as well as with researchers and scholars from all over the world. Among the ruins of the Acropolis and the Temples dedicated to the gods, from Athena to Poseidon, from Castor and Pollux to Apollo, stretching out all the way to the sea.

MOUNT COFANO NATURAL RESERVE.
BETWEEN THE SEA AND LIMESTONE PEAKS.

The Mount Cofano Reserve is a showcase that includes many treasures. Located halfway between San Vito Lo Capo and Trapani, it is one of the most interesting natural attractions on the Trapani coast.

Protected by silence, invaded by the luxuriant dwarf palms and the choreographic tufts of the “disa” plants (ampelodesma), dotted by enormous rocks the roll all the way down to the sea, the Mount Cofano Reserve is a fascinating place where time seems to stand still. The intense blue sea frames the promontory and its limestone peaks. The Tono Tower stands out, the only one in Sicily that is square-shaped and with concave walls, built in 1500 to defend the bluefin tuna industry and the ancient fishing village.

MACARI VILLAGE AND BEACH.
GORGEOUS SCENERY OUT OF TIME.

The village of Macari, protagonist with its unforgettable scenery of the Rai fiction, “Màkari”, is a small fraction of San Vito Lo Capo nestled between the Zingaro mountains and the sea. A handful of houses from which unforgettable sunsets over the vast Monte Cofano gulf can be enjoyed. Life goes by slowly here, traffic is but a memory, and the only sound to be heard in the morning is the singing of birds. 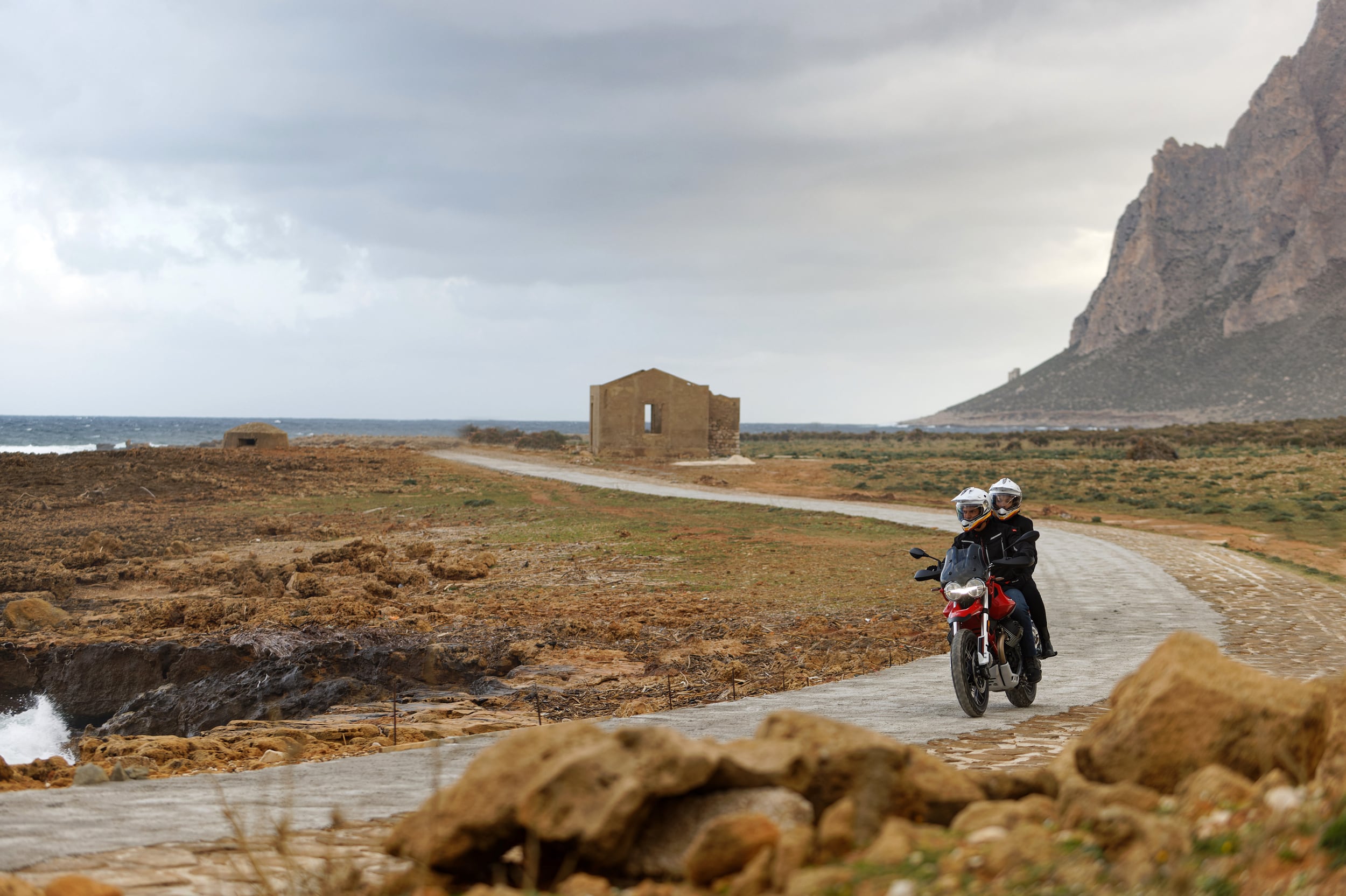 Macari, perched on the slope halfway along the coast, dominates a precious section of cliff that goes down to the sea, where the beautiful pebble beaches of Bue Marino and Isulidda open up and, a bit further on, the golden sand Baia Santa Margherita beach. Untamed and uncontaminated corners of the sea. 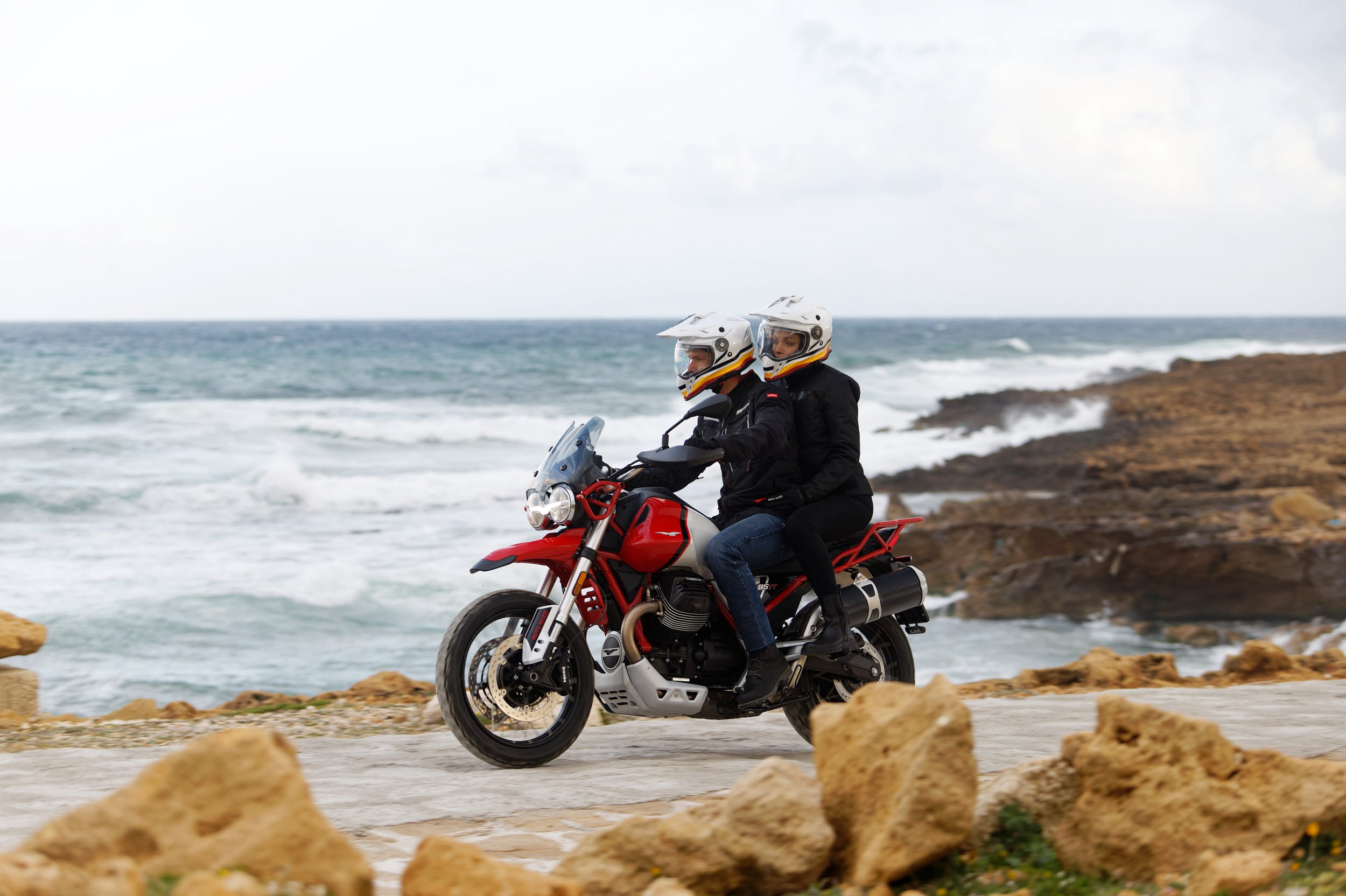 Behind it are the mountains of the Riserva dello Zingaro (Gypsy Reserve) and a long dolomite wall, just a five-minute car ride to the San Vito Lo Capo beach. A brief stop at its scenic overlook is a must to take in the extraordinary scenery in a single gaze, which goes from the Torre dell’Isulidda to the Mount Cofano Reserve: one of the most beautiful views that Western Sicily has to offer and impossible to forget.

White dunes, ponds, lagoons, islands and... windmills. In the section of road from Trapani to Marsala, a stop at the Marsala salt pans along the coast is a must. They are part of the Islands of the Lagoon Oriented Natural Reserve. An exultation of breathtaking colours, especially at sunset, when the setting sun creates golden brush strokes.

The large expanse of water lies along one of the most important waterfowl migratory routes between Africa and Europe. Over 240 presently documented species of birds use the salt pans as a place to stop, feed, winter, and reproduce. The pink flamingos are by now habitual visitors, whereas in the springtime, the nesting birds use the banks of the salt pans to lay their eggs. These include the Avocet, Knight of Italy, Shelduck, Kentish Plover, Little Tern, Moorhen, and the Egret. The Spoonbill can also be seen, as well as other rarities, such as the Terek Sandpiper.

The oasis, which spreads out over 986 hectares, offers a unique voyage between basins, salt heaps, canals and windmills. Here, the salt workers, exploiting natural ingredients such as the wind, the sun, and the sea, through the passage of water in various size and depth basins, obtain the precious layer of sea salt crystals in the summer through the effect of the evaporation and consequent precipitation.

IN TRAPANI, BETWEEN TWO SEAS.

Trapani, with its sickle shape, from the Greek word Drepanon, enjoys a geographically enviable position: between two seas, at the foot of Mount Erice, near Selinunte, across from the spectacular Egadi Islands and the famous Salt pans. Over the years, the city has developed a flourishing economic activity connected to the extraction and sale of salt, bluefin tuna fishing, and the exportation of marble. The cultural hub of the entire province, it hosts one of the oldest high schools in Sicily, libraries, and a plethora of interesting museums to visit. 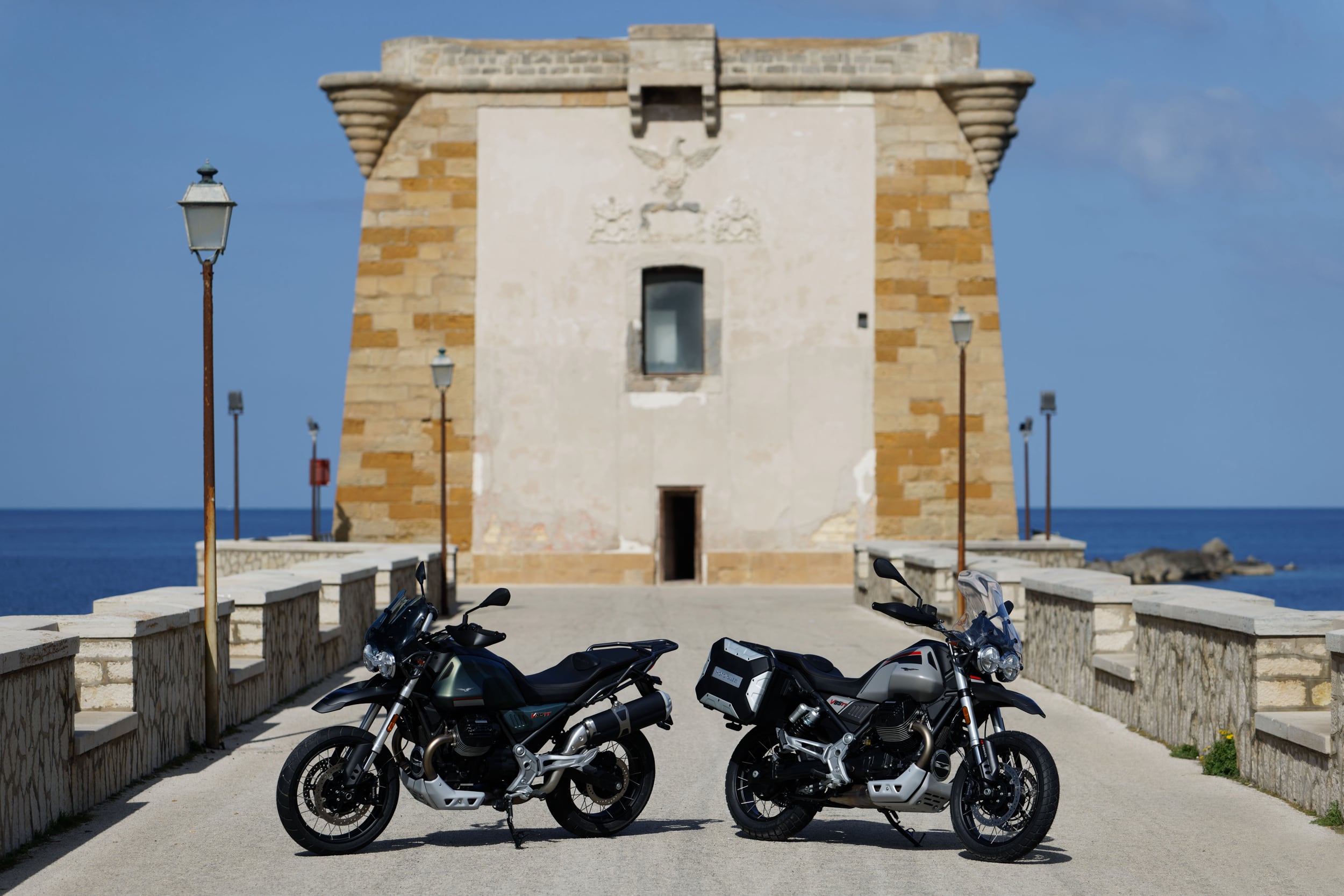 Strolling through its historic centre, the various cultural layers are immediately apparent which, over the centuries and through the many periods of domination, have left testaments of architectural, artistic, and monumental value. The Ligny Tower is a must-see. Built during the Spanish domination to defend against incursions, it is one of the symbols of the city. 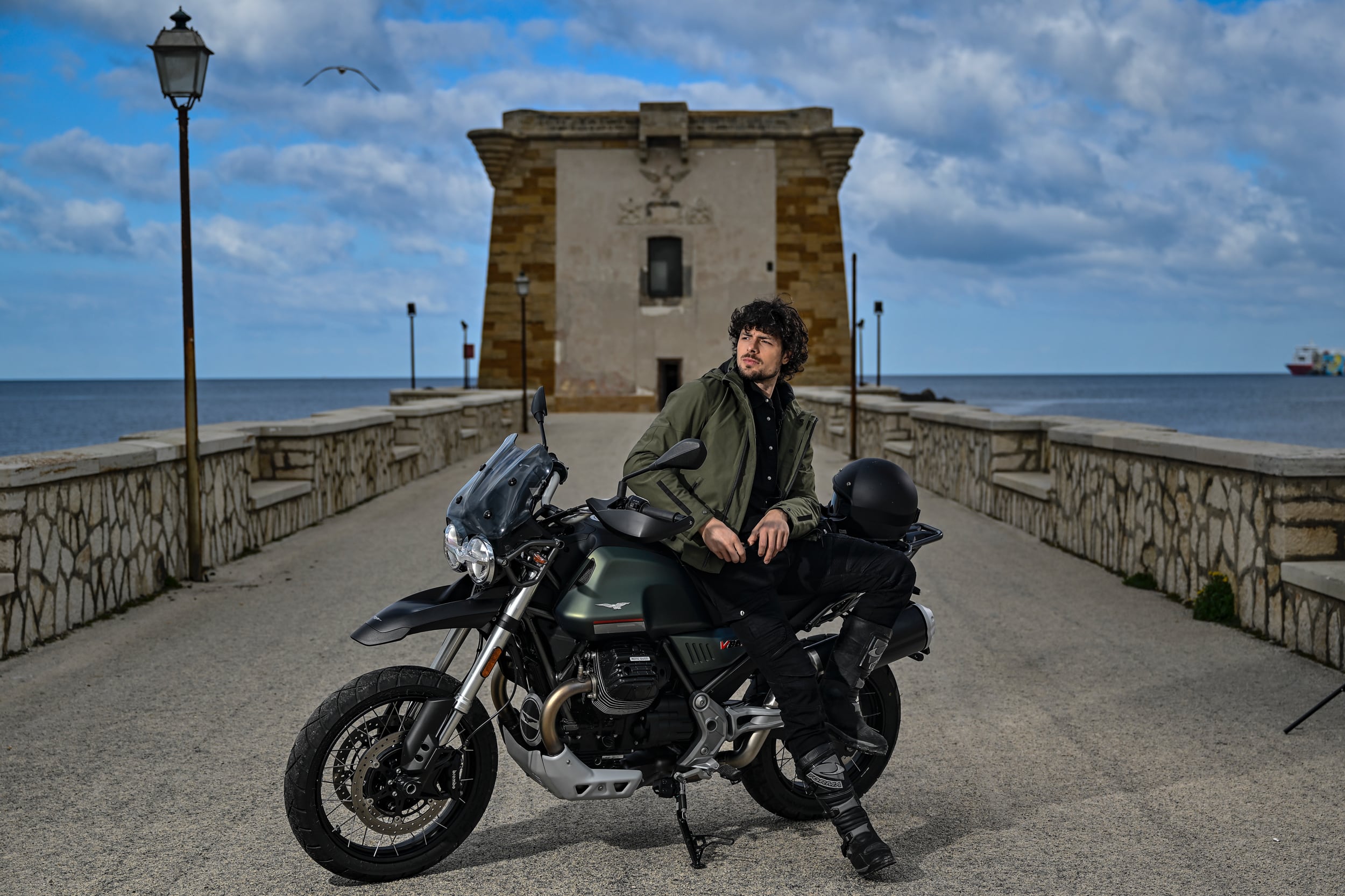 It is at the end of the western coast and provides a breathtaking view between the Sicilian Channel and the Tyrrhenian Sea. It now hosts the Museum of Prehistory and a marine archaeological hall which even includes a helmet found on the seabed.