ITALIAN CHAMPS. FROM EURO 2020 IN LONDON TO THE TOKYO OLYMPICS

12 July 2021 – Blue is the dominating colour of summer 2021. And, after the extraordinary and victorious adventure of the Italian National Football Team, which won the UEFA Euro 2020 European Championship, excitement and support is already growing for the upcoming XXXII Olympics in Tokyo (24 July - 9 August). 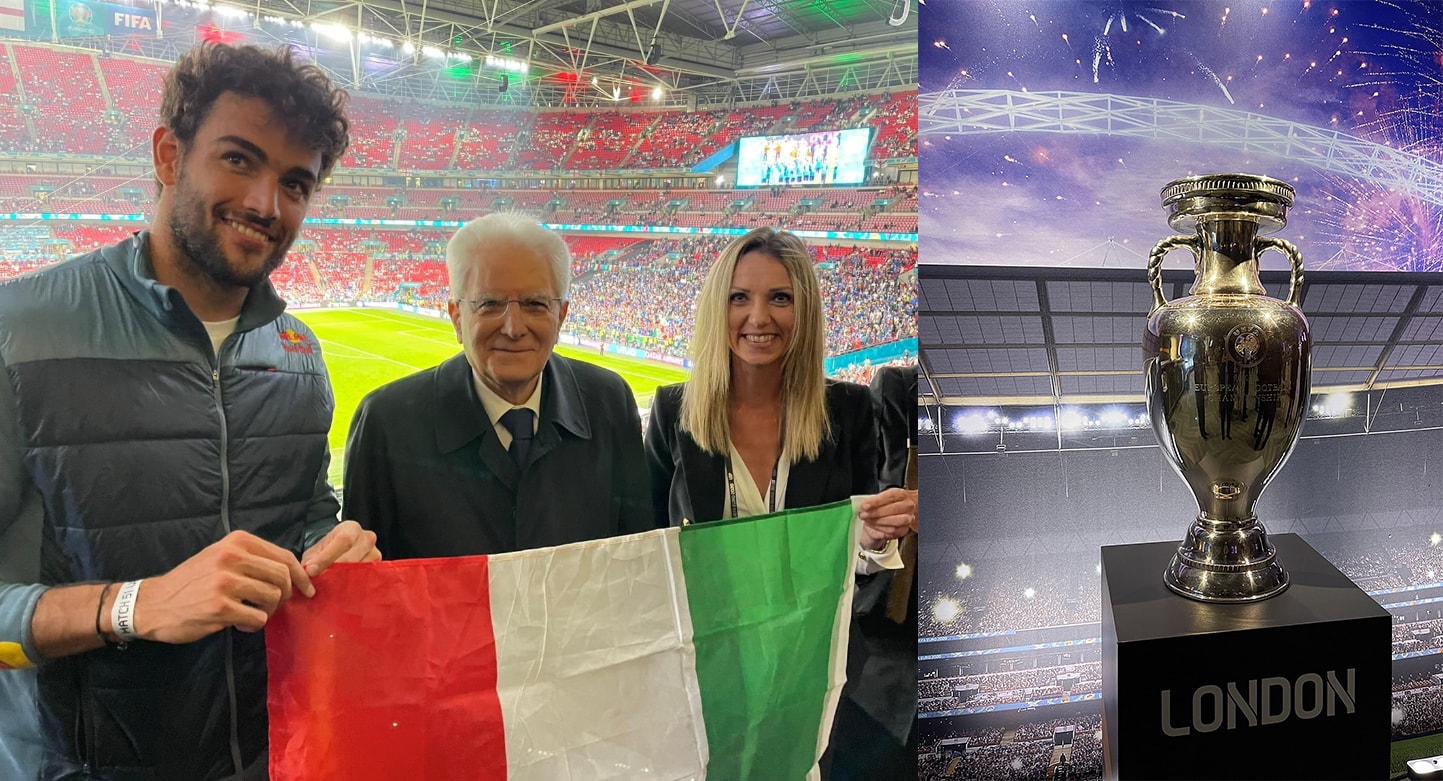 London, Wembley Stadium, 11 July 2021. President of the Italian Republic, Sergio Mattarella, at the end of the European football finals in London. On his right, young tennis player, Matteo Berrettini who, on the same day, played in the final of the Wimbledon tournament, the only Italian to achieve this undertaking. On Mattarella’s left, Valentina Vezzali, current Under-secretary of State for the Presidency of the Council of Ministers, with delegation for sport, considered one of the best fencers ever, who won nine Olympic medals, including six golds. In the photo in the right, the sought-after European Cup the Italian team won. Source of images: quirinale.it.

And if the double thrills on English soil between football and tennis weren’t enough, Moto Guzzi also celebrates the medals earned in the Czech Republic recently by the young Italian rowers at the 2021 World Rowing Under 23 Championship. 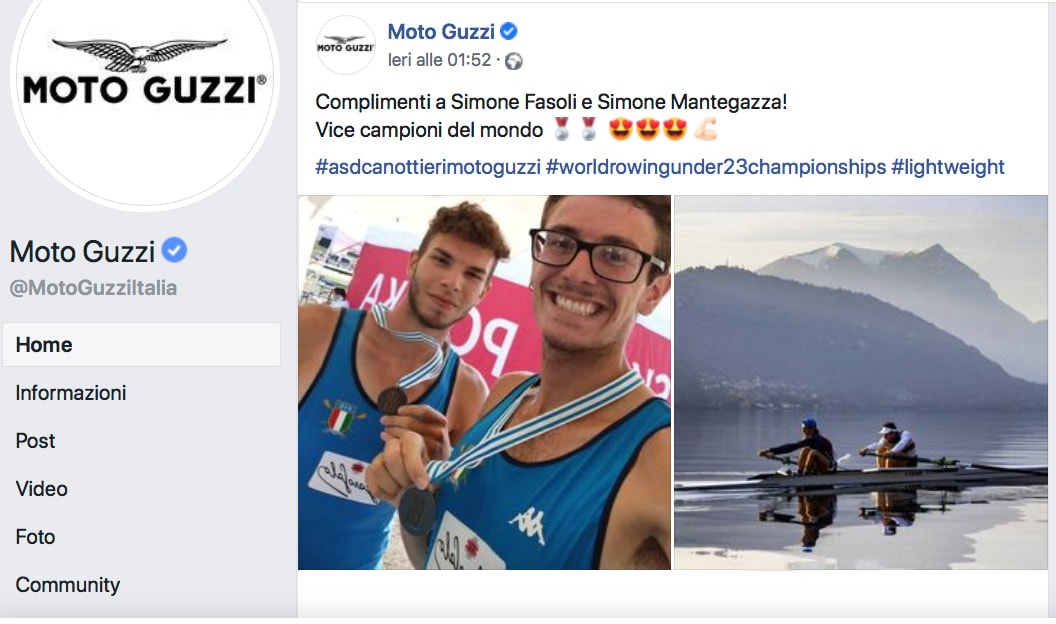 YOUNG CHAMPIONS GROW UP: SURFER LEONARDO FIORAVANTI GOES TO THE TOKYO OLYMPICS. For the first time, surfing has become an Olympic sport and at the Tokyo games, we’ll be rooting for Leonardo Fioravanti, 25 years old, under-18 world surfing champion in 2015, the first Italian to qualify for the World Surf League in 2017 and, thanks to his first place at Sydney Pro Surf in March of this year, Leonardo qualified for the Olympics.

In 2015, Wide dedicated the following article to him. Leonardo, quite young at the time, was also the protagonist of a web series (2013) entitled “I surf Italian” with Vespa co-starring in the trailer. 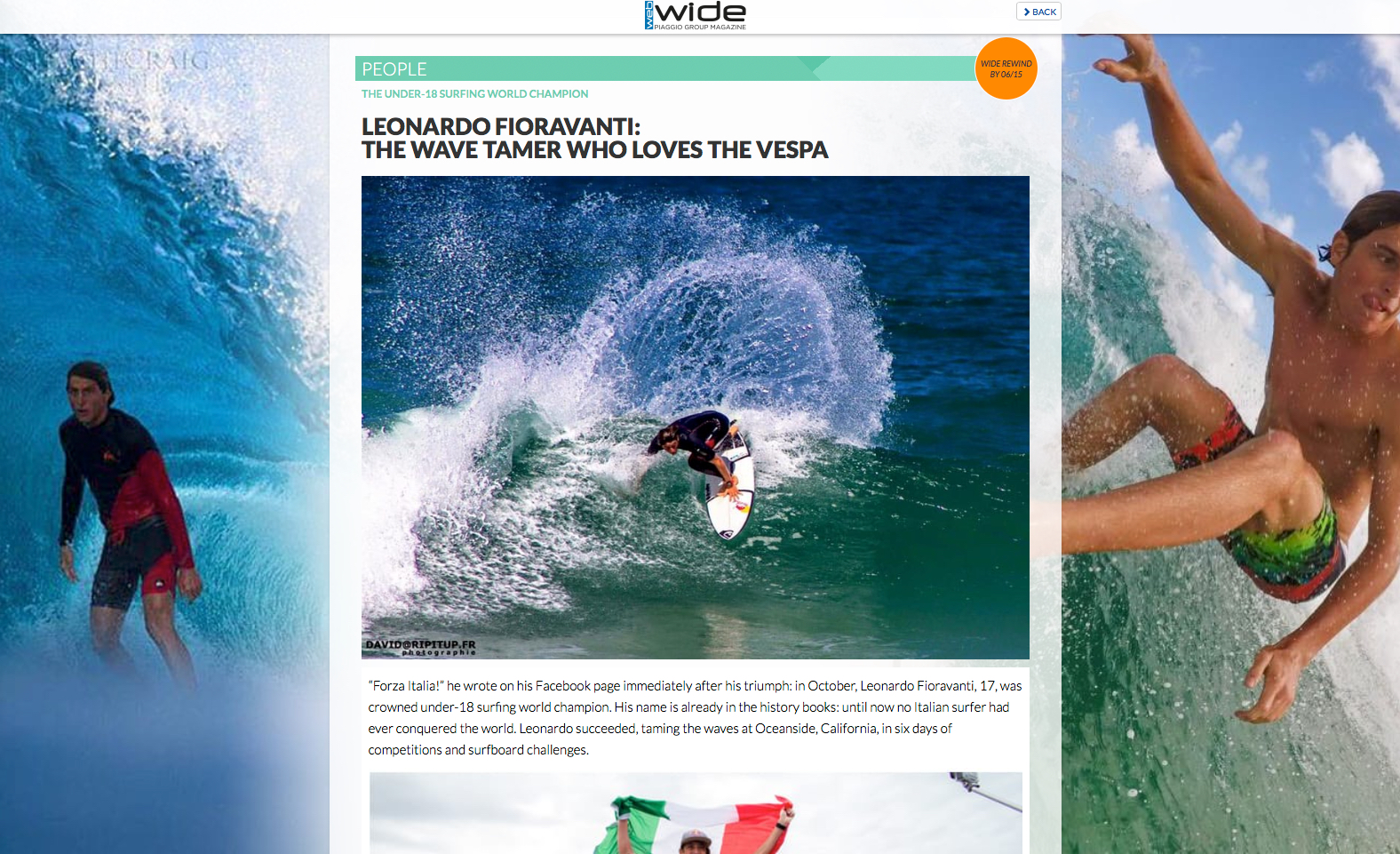 And speaking of WIDE REWIND – also taken from our magazine archives – here are some other articles dedicated to Italian champions and interesting tidbits. With a touch of fair play for the English. 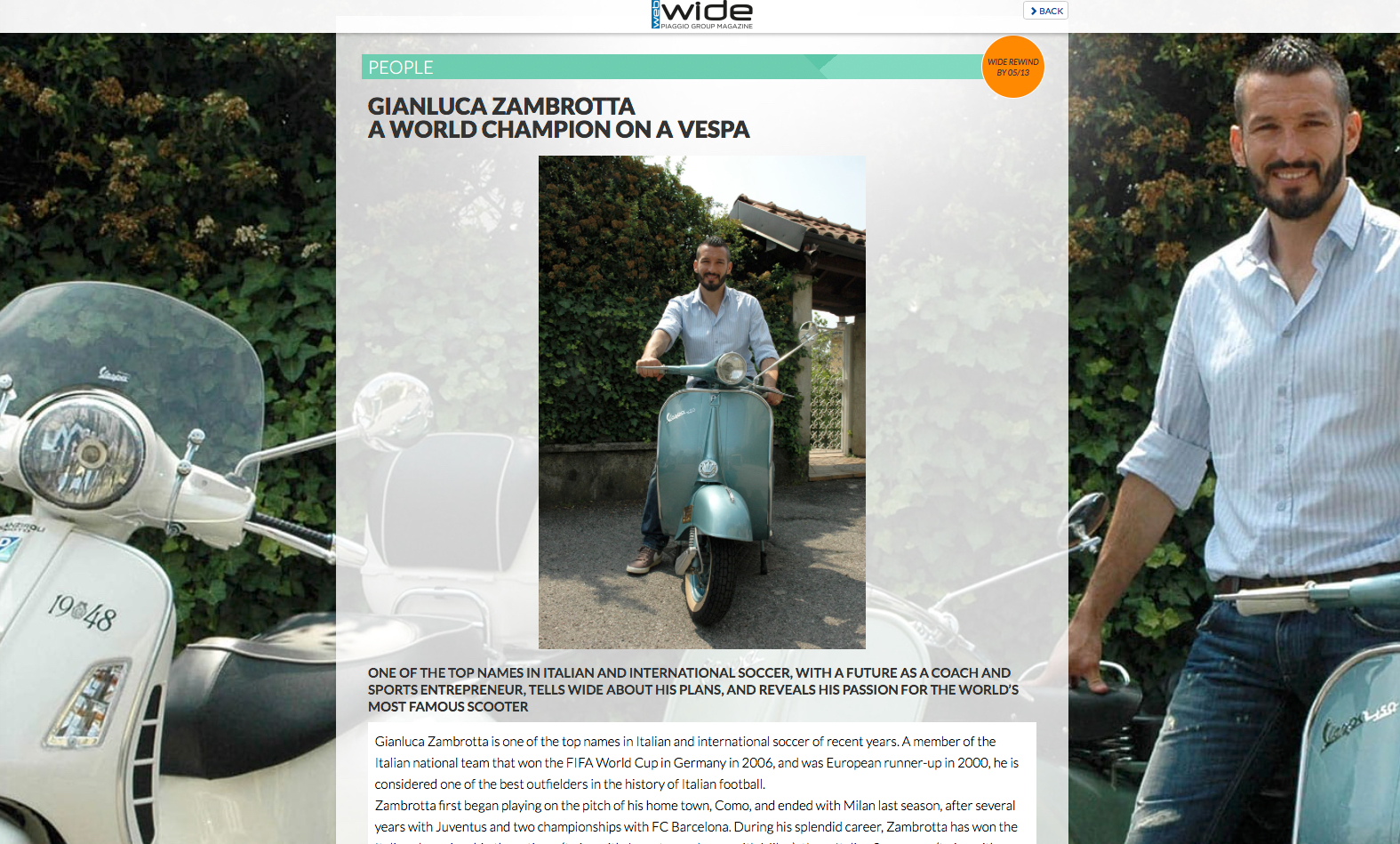 WIDE REWIND: THE ‘WORLD CUP’ VESPA DEDICATED TO THE HEROES OF BERLIN.
wide.piaggiogroup.com/en/articles/people/andrea-tiozzo-pagio-and-his-2006-world-cup-vespa 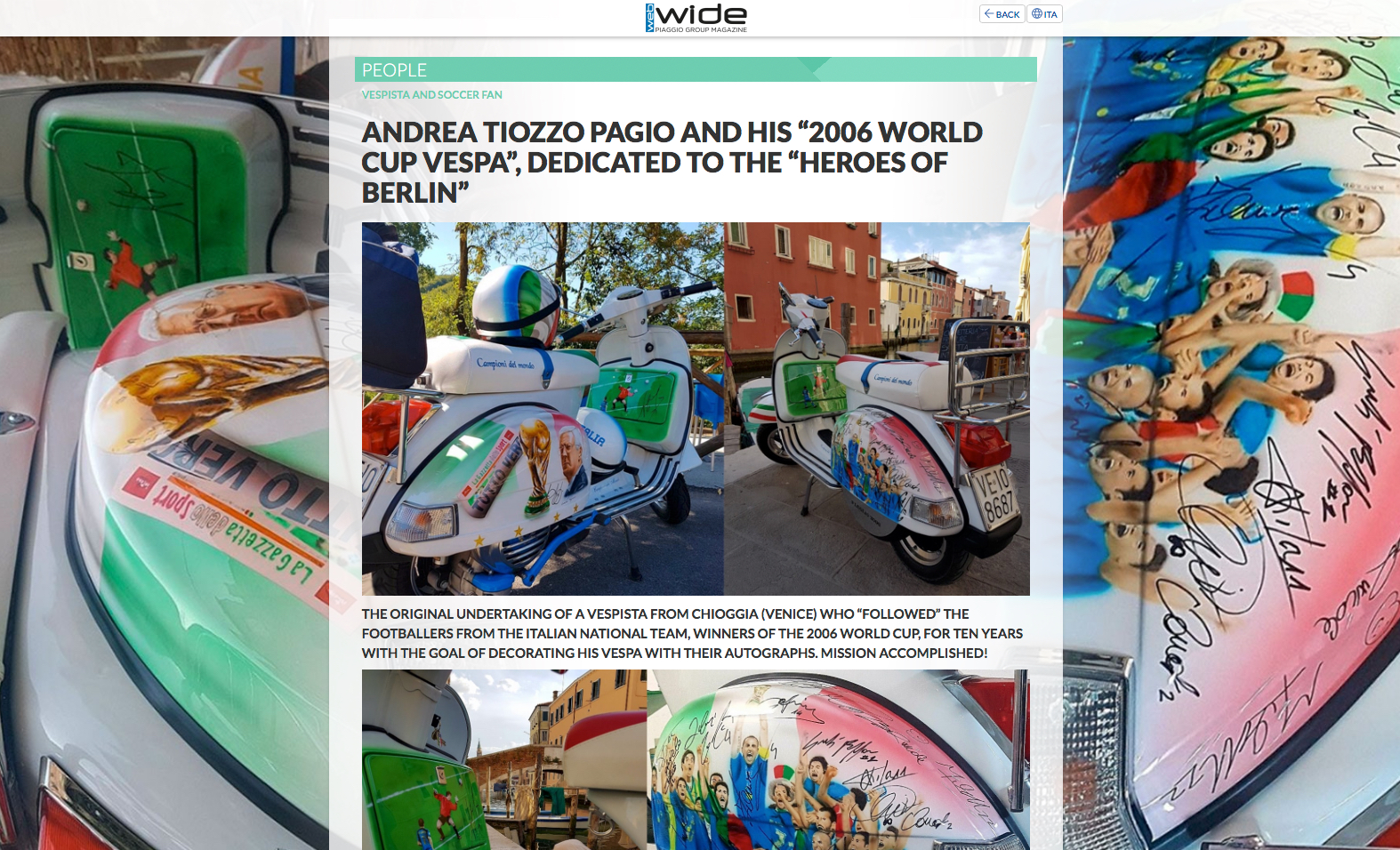 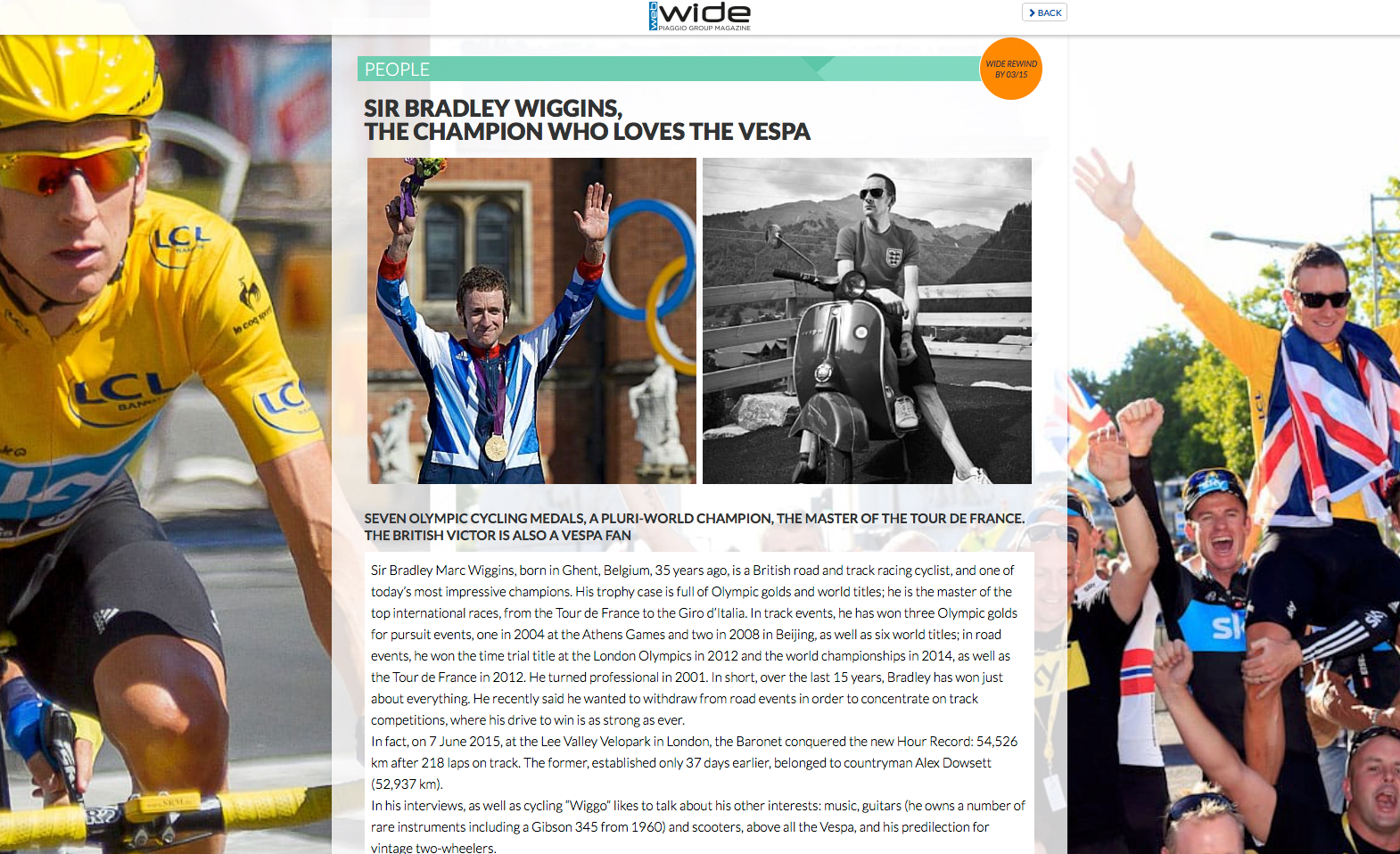 IN THE BACKGROUND IMAGES, ON THE RIGHT: ANDREA TIOZZO PAGIO’S AIR-BRUSHED “WORLD CUP” VESPA; ON THE LEFT: POSTER FOR THE VESPA PX 150th ANNIVERSARY OF A UNITED ITALY, 2011.