IN BUDAPEST: SUCCESS OF THE PROJECTION WITH TEST SCREENING OF THE DOCUFILM “RIDE BACK TO FREEDOM”, WHICH TELLS THE STORY OF AUSTRIAN DIRECTOR HERMANN WEISKOPF’S EXTRAORDINARY TRIP TO ITALY (IN VESPA) IN SEARCH OF FREEDOM 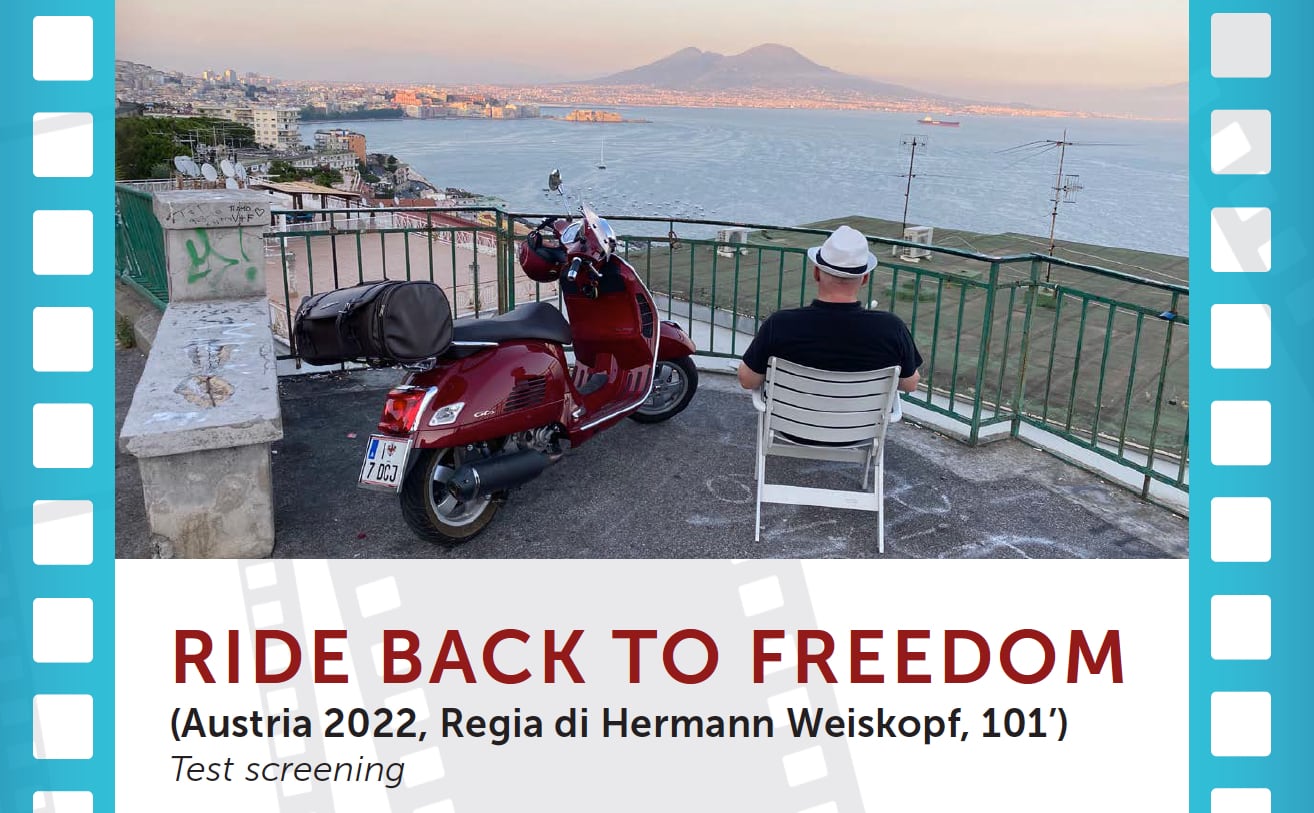 (Image taken from the invitation to the event).

14 March 2022 – It was a highly anticipated event. The invitation read: “The Austrian Cultural Forum and the Budapest Italian Institute of Culture are pleased to extend the invitation to the projection of the film Ride Back to Freedom. Immediately after the end of the first extremely strict lockdown caused by the Coronavirus, Austrian director Hermann Weiskopf rode his scooter on a journey of almost 5,000 kilometres across Italy. In the film, we are witnesses to a few stories, some tragic, others comical, yet others philosophical, and almost all inspiring. After the projection, we will have the chance to hear Hermann Weiskopf in a live debate.” The film, a sneak preview projection intended as a test screening, was projected in Italian with subtitles in English. 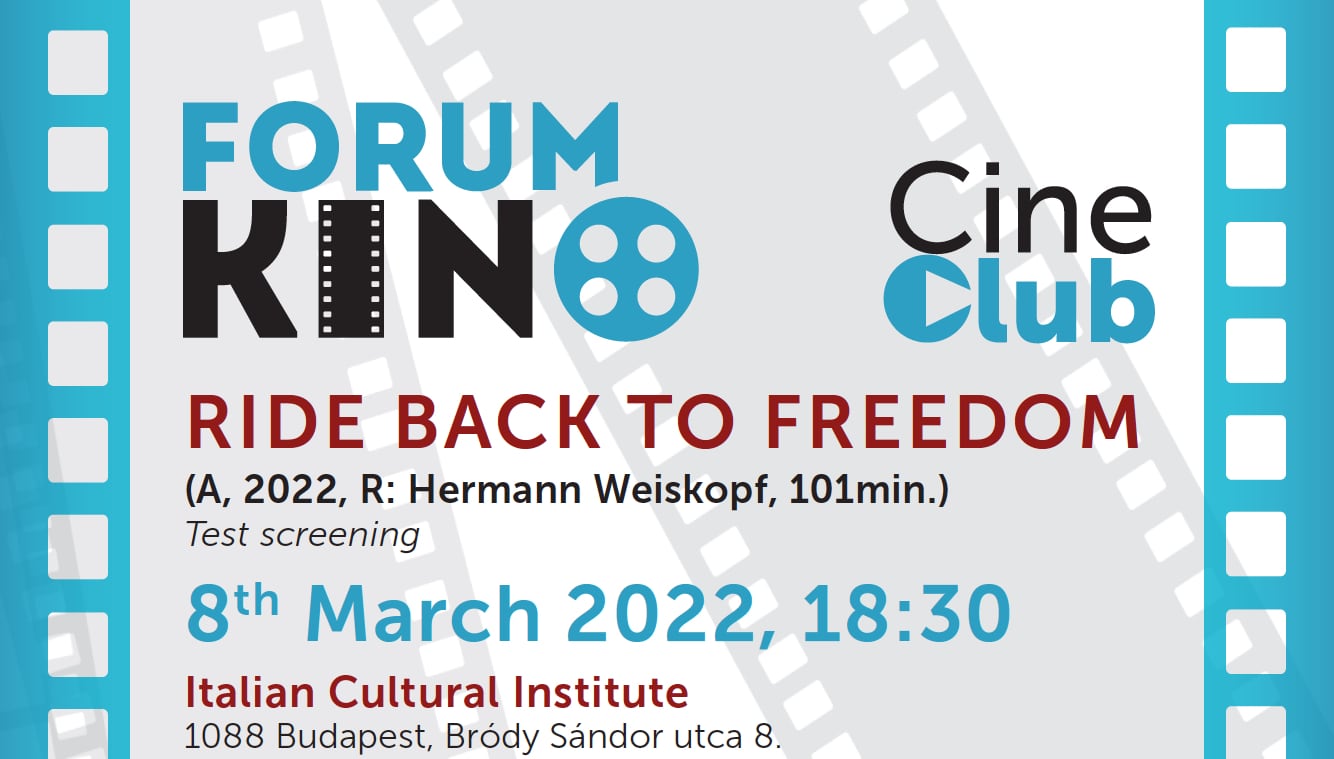 (Image taken from the invitation to the event).

And the projection, which was held on 8 March, within the Kino dell'Osztrák Kulturális Fórum - Österreichisches Kulturforum Budapest and the CineClub of the Budapest Italian Institute of Culture (Italian Embassy in Hungary), in concert with its counterpart institute in Austria, exceeded all expectations, both of the public and the organisers, as well as those of the Austrian director himself. 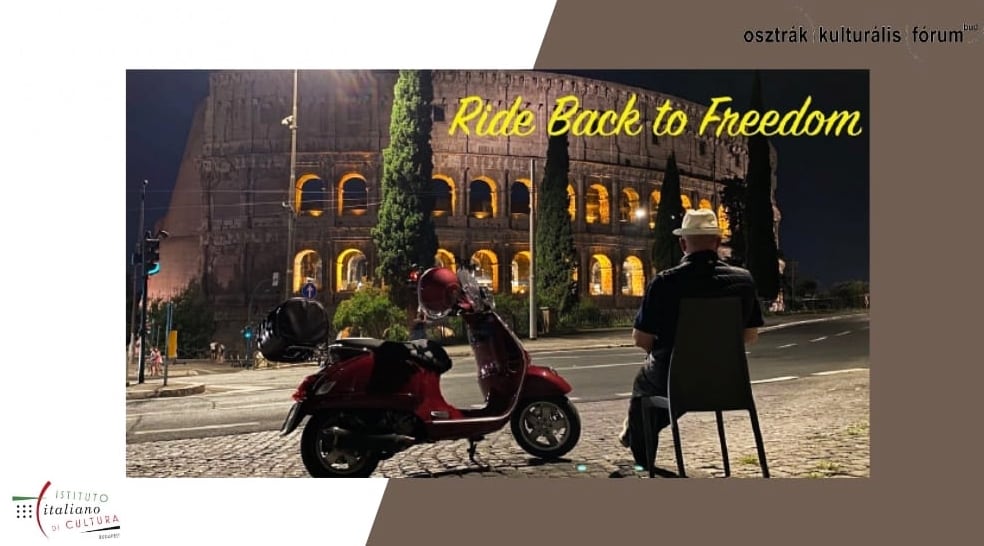 Hermann Weiskopf writes: “Thanks to the support and the organisation of the Austrian and Italian Forum/Institute in Hungary, we had a thrilling international test projection of our documentary ‘Ride back to Freedom’ in Budapest! Those who participated directly in the evening gave the film I directed a warm and highly curious welcome.

Some moments of the evening/event in Budapest.

Thank you so much for this. Also, questionnaires were distributed and collected where viewers of the film wrote down their impressions and comments. For us and for AVG Filmproduktion this was a new and unique tool and experience and it was truly valuable in better assessing the cinematographic work done by our team. I wish to thank everyone for their interest and support for the European independent cinema!”

Representatives of Hungarian Vespisti from Vespa Club Alisca participated in the event with their President, Annamária Szabó, who travelled over 150 km to see the projection in Budapest. In the photos they can be seen with Austrian Director, Hermann Weiskopf (in beige clothing). The director from Innsbruck had a message of thanks for them: “After returning from beautiful Hungary, I am writing to express my heartfelt thanks for your visit as Vespisti to the Italian Institute of Culture for the ‘Ride back to Freedom’ test screening. Having you Vespisti with me at the première of the film in front of a real audience was truly wonderful and it made me feel a bit at home with our great family of ‘healthy nuts’ on two wheels! Please give my best and my thanks to all the Vespisti in Budapest. It would have been wonderful to spend even more time with you after the projection and discussion of the film. I hope to be able to show ‘Ride back to Freedom’ in your city of Szekszárd anyway and I have already taken steps with a Hungarian distributor. In the meantime, I wish you wonderful outings on Vespa!”

Austrian director Hermann Weiskopf in Budapest celebrates the success of the international test screening of his docufilm.

In short, a successful event with an enthusiastic audience which sincerely applauded the director and his work, also generously participating in the test screening, enriching the questionnaires with highly interesting comments. Focused particularly on the cardinal concept of the docufilm, summed up by the title – Ride back to Freedom – and relative subtitle: “2 wheels in search of lost freedom in times of Coronavirus.”

The statistical results of the test screening were also flattering, with the vast majority of the audience saying that they “liked the film a lot” would “recommend viewing”, deeming it “suitable both for cinema and TV/streaming”, and that it “stirred new emotions”. Of the free comments on the questionnaires, we quote: “Authentic directing and characters that describe the particularities of Italians well”; “What is my idea of freedom? Making a film like this one, in complete freedom”; “Nice to see and hear that people have not lost hope in the future... and we have learned to look at small things as important too”; “The film touched my soul”; “A great road movie…”. The scenes where the director-star tasted typical Italian cuisine (which he loves) were also highly popular, making some Hungarian viewers want to imitate him and come visit the Belpaese! Maybe even on a Vespa (like Mr. Hermann did), the undisputed symbol of freedom and the joy of living for over 75 years.

In the photos by Enzo Weiskopf: director Hermann Weiskopf during a recent visit to the Piaggio Museum in Pontedera, Italy (welcomed by Riccardo Costagliola, President of the Piaggio Foundation), shows the work by artist Jacqueline Seeber, on which the brochure for the film ‘Ride back to Freedom’ was based, prepared for the film’s tour in Austria; departure planned for 6 May 2022 from Innsbruck, in about thirty cinemas; the distribution project anticipates a subsequent tour in Italy. We’ll be talking about it again.

Synopsis. Less than two years ago, Hermann Weiskopf was at the Brenner border at midnight of 15 June 2020 (in the rain) astride his beloved Vespa GTS: as soon as the borders reopened, after the first lockdown, he crossed over to tackle a long journey through Italy, from Brenner to Lampedusa (in Sicily), with photography director and cameraman Bernhard Freinademetz, on the hunt for the meaning and value of freedom lost... and rediscovered. An extraordinary and unrepeatable on the road testimony which became the docufilm “Ride back to Freedom” (produced by AVG Filmproduktion: avgproduktion.com/de). 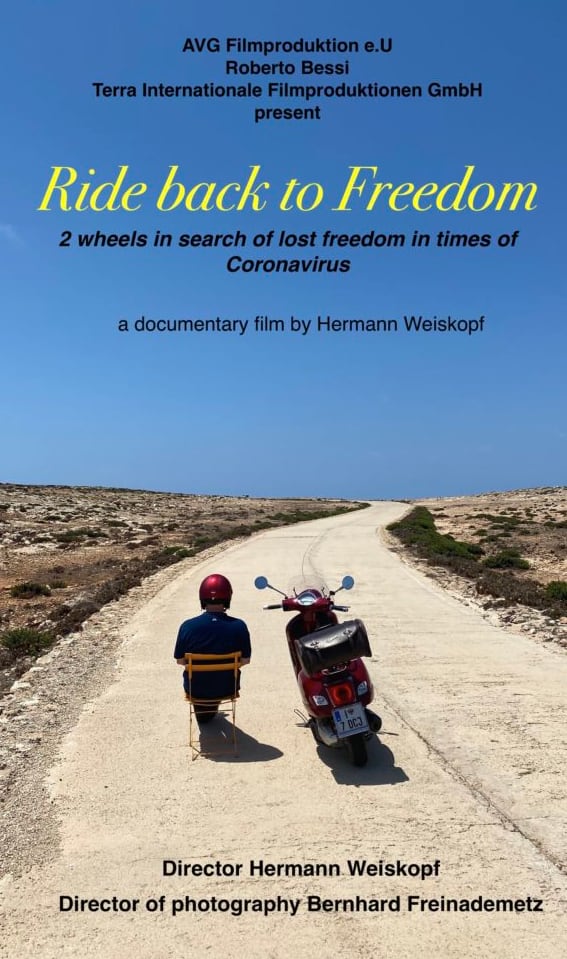 WIDE REWIND. Here are the two previous Wide magazine articles dedicated to the director Weiskopf, with interviews and the official trailer of the docufilm:
wide.piaggiogroup.com/en/articles/travels/ride-back-to-freedom 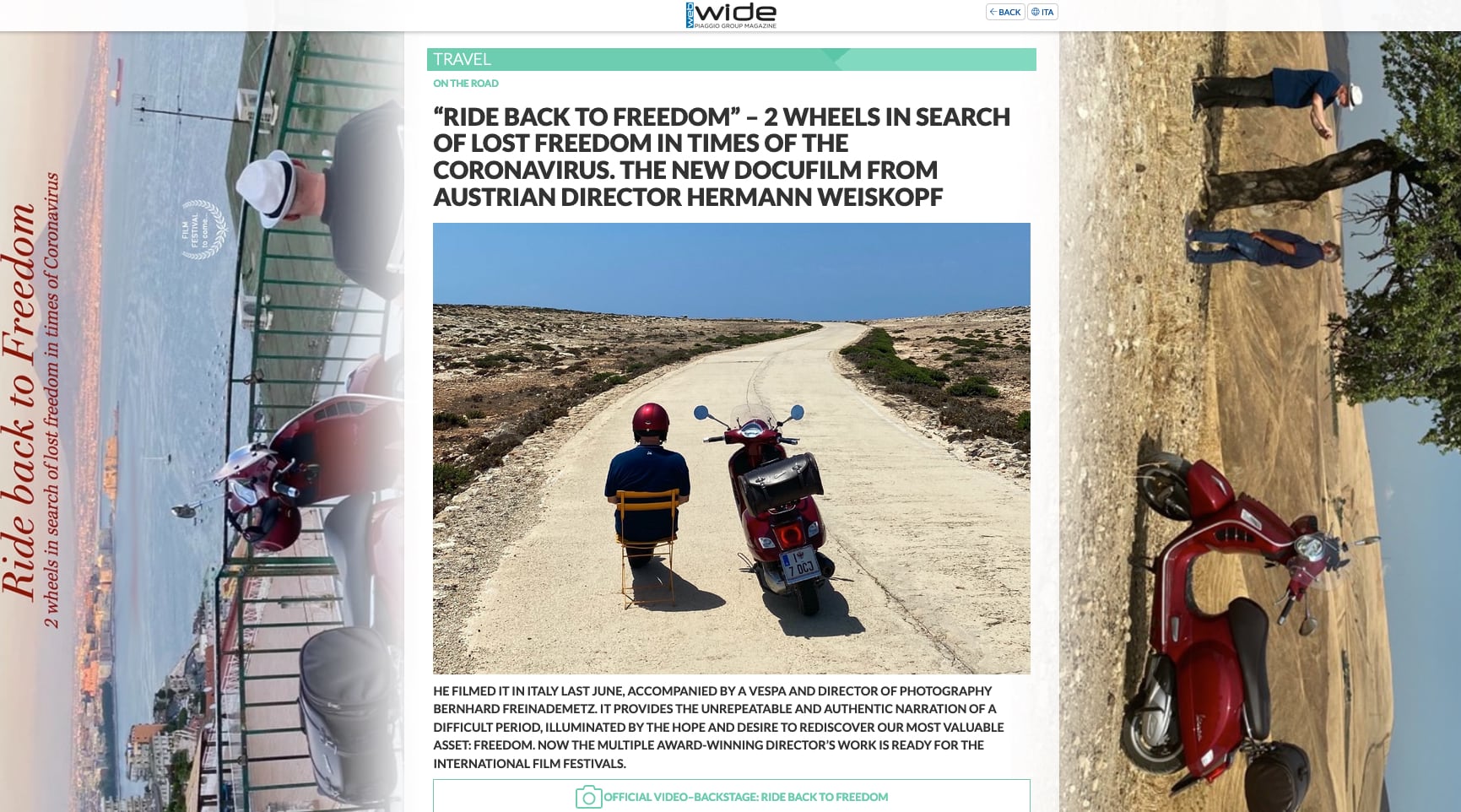 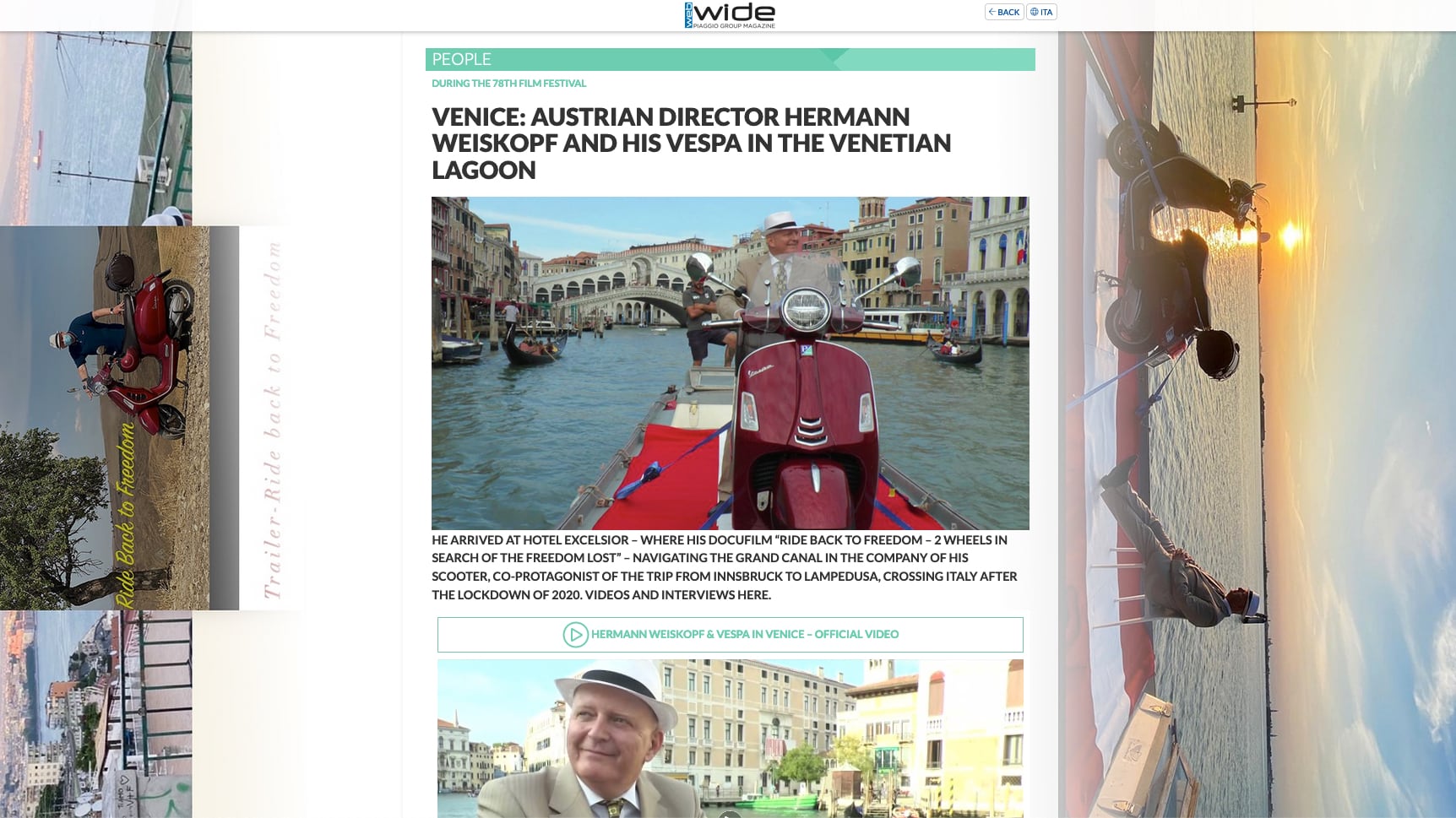